After 95 years of cannabis prohibition, Canadians are finally gearing up to celebrate their first-ever legal 4/20 — an important milestone for connoisseurs, but we're only just living through the very start of legalized weed in Canada.

Kinks in the system are rampant as each provincial government struggles to regulate the production and distribution of cannabis regionally amidst a nation-wide supply shortage.

The illegal market is thriving, edibles are still unregulated and Ontario's 25-store cap on brick and mortar retailers has proven unpopular, to say the least.

Only ten out of a promised 25 legal cannabis stores actually opened on April 1, leaving many in the province with just one option for purchasing weed the legal way: through the government's own glitch-plagued website.

But like I said, we're at the beginning. It's been less than a year since the federal government legalized marijuana and the industry is already starting to soar despite any regulatory hiccups and logistical hindrances.

Ontario is in a prime position to cash in on the green gold rush, according to a report released on Thursday by the Ontario Chamber of Commerce (OCC).

Called Supporting Ontario’s Budding Cannabis Industry, the report explains how Ontarians can capitalize on this fast-moving industry as residents of the first G7 county to legalize at the federal level — but our governments need to make the right choices now for that to happen.

"Ontario really is in a unique situation," says Daniel Safayeni, Director of Policy for the OCC. "We have the biggest consumer market here, over half of the country's licensed producers are here and the majority of cannabis jobs within the sector — close to 6,000 — are here in Ontario."

The report makes a number of recommendations aimed ensuring economic growth while still safeguarding public health: Converting Doug Ford's lottery-based licensing system to one based on the merit of business owners being just one of them.

One of the most exciting aspects of the report, however, pertains to the future of Ontario's labour market.

"It is predicted that around 150,000 cannabis-related jobs will emerge after legalization, which would make employment in the cannabis sector larger than Canada's agricultural, utilities, and real estate sectors," reads the report.

"With access to a strong talent pool, cannabis tourism is an additional
market Ontario should develop." 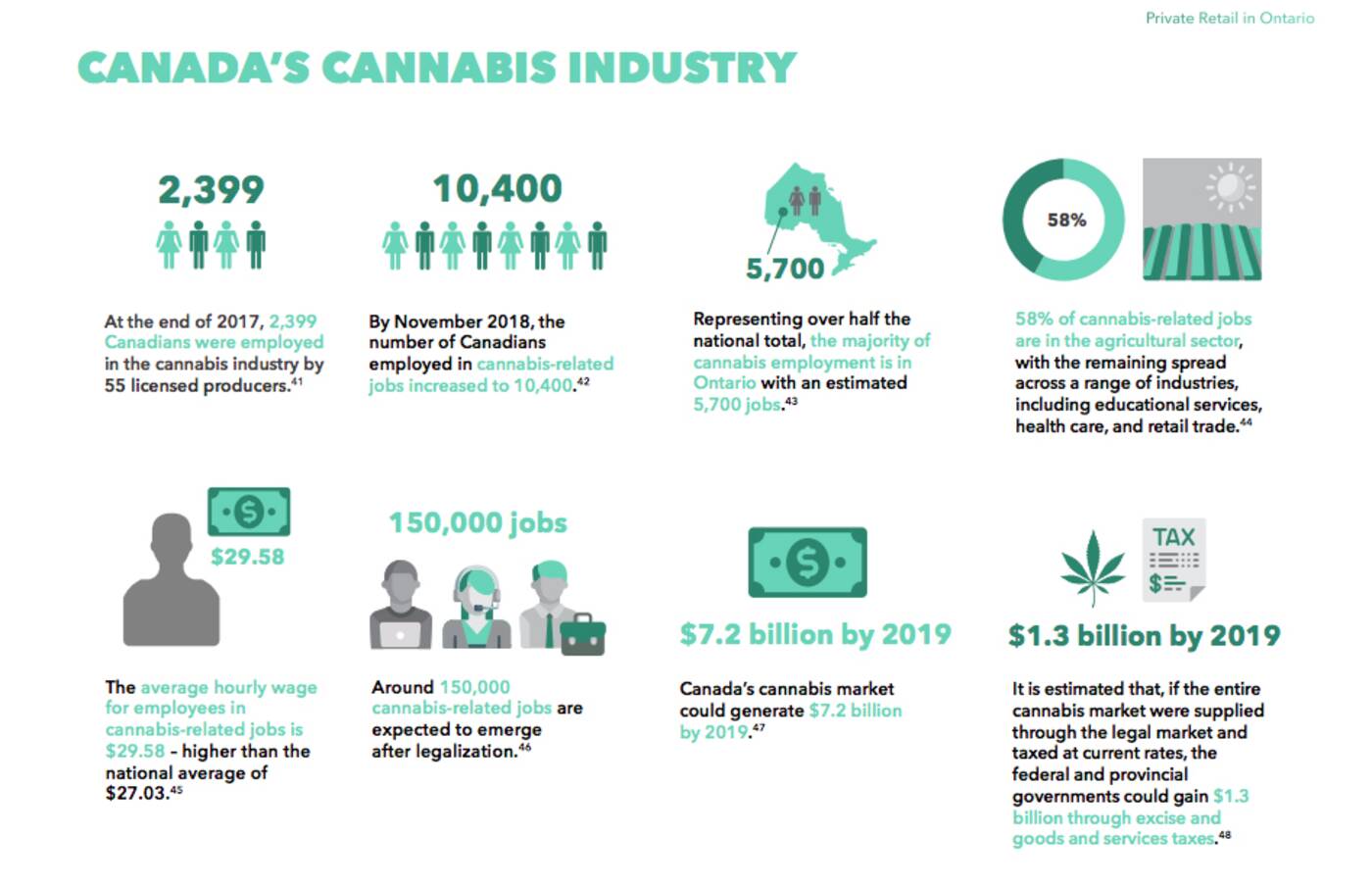 Graphic via Ontario Chamber of Commerce.

Ontario could very well be a leader in research and development activities related to cannabis worldwide with proper education programs and training in place. We're already starting to see it happen.

"Forty-four of Canada's post-secondary institutions are right here in Ontario, many of which are already jumping on board," says Safayeni, pointing to schools like Ryerson University, George Brown College, the University of Ottawa, Durham College, Niagara College, Loyalist College and the University of Guelph.

All of these institutions either already have or are in the process of developing courses related specifically to cannabis (UOttawa's law school, for instance, offers two courses on cannabis law).

One way for the government to help would be by providing grants for the development of facilities like U of G's forthcoming 30,000 square-foot research complex.

"It is incumbent upon post-secondary institutions and the government to work together to make sure we're capitalizing on this opportunity," Safayeni says.

"It's a little bit of upfront investment right now to make sure we're setting a good precent, which is important for longterm viability of the sector."

You can check out the OCC's entire report right here, but the bottom line is this: A lot of eyes are on Canada right now as the first industrialized country to nationally legalize and regulate recreational cannabis.

Both Ontario and Canada stand to gain a lot from this position at the forefront of a new multi-billion-dollar industry. With the right private retail system, training programs, edible regulations and supply chain, the sky really is the limit.

"Canada and Ontario are positioned to influence public policy at home and abroad, setting the stage for other countries that might follow our lead," the report concludes.

"Government and stakeholders [must] to work together to establish a global precedent for a recreational cannabis market that both achieves the public policy objectives set forth by government, while positioning Ontario's cannabis industry for success."