Front Street is about to get an incredible urban makeover

To walk along the western end of Front St. today is to witness an urban wasteland. On one side you have the rubble that remains from the Globe & Mail building and Spin Master warehouse, and on the other you have the sprawling railway tracks leading towards Union Station.

There's a few newer condos as you approach Bathurst St. where the Minto Westside development is also going up, but these pockets are only a hint of what's to come for the street.

Over the next decade, this entire area — stretching west to Spadina and north to Wellington — will be rebuilt with new retail, office space, dense residential, and a surprising number of parks.

Even if some of the development proposals stall, the Front St. corridor is sure to look unrecognizable in just a few years on the basis of the projects that have already been approved. 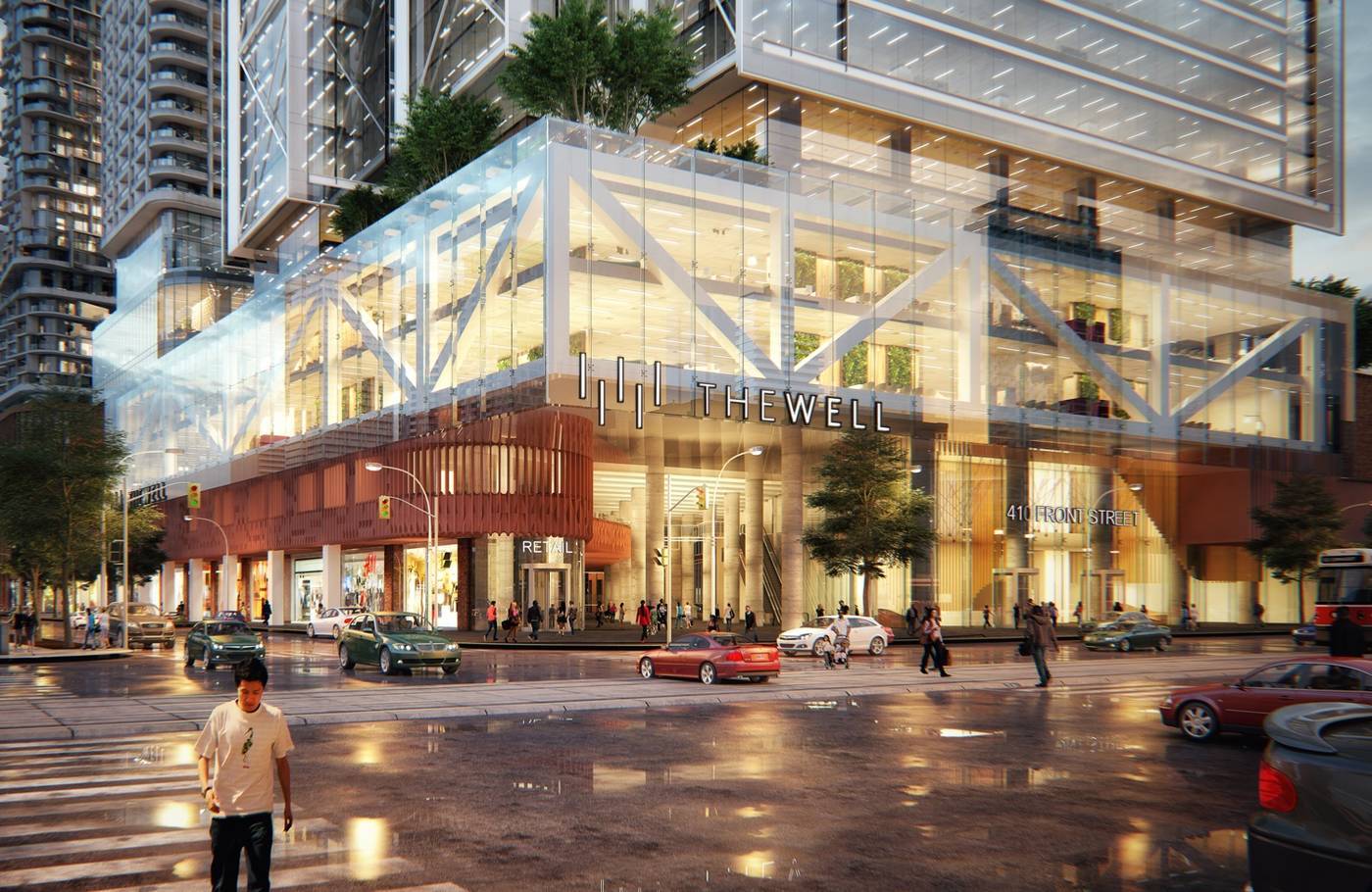 The Spadina gateway of The Well development. Rendering via The Well.

The most significant of these is The Well, a sprawling mixed use community from RioCan REIT, Allied Properties REIT and Diamond Corp. It'll extend on the north side of Front from Spadina all the way to Draper St., the quaint little thoroughfare protected by redevelopment.

There are ambitious plans in place here that should ward off complaints about more condos or suburban-style shopping centres in the city's core. Prior to the demolition of the Globe Building, there was never much vibrancy to the streets in the area, so that's bound to improve. 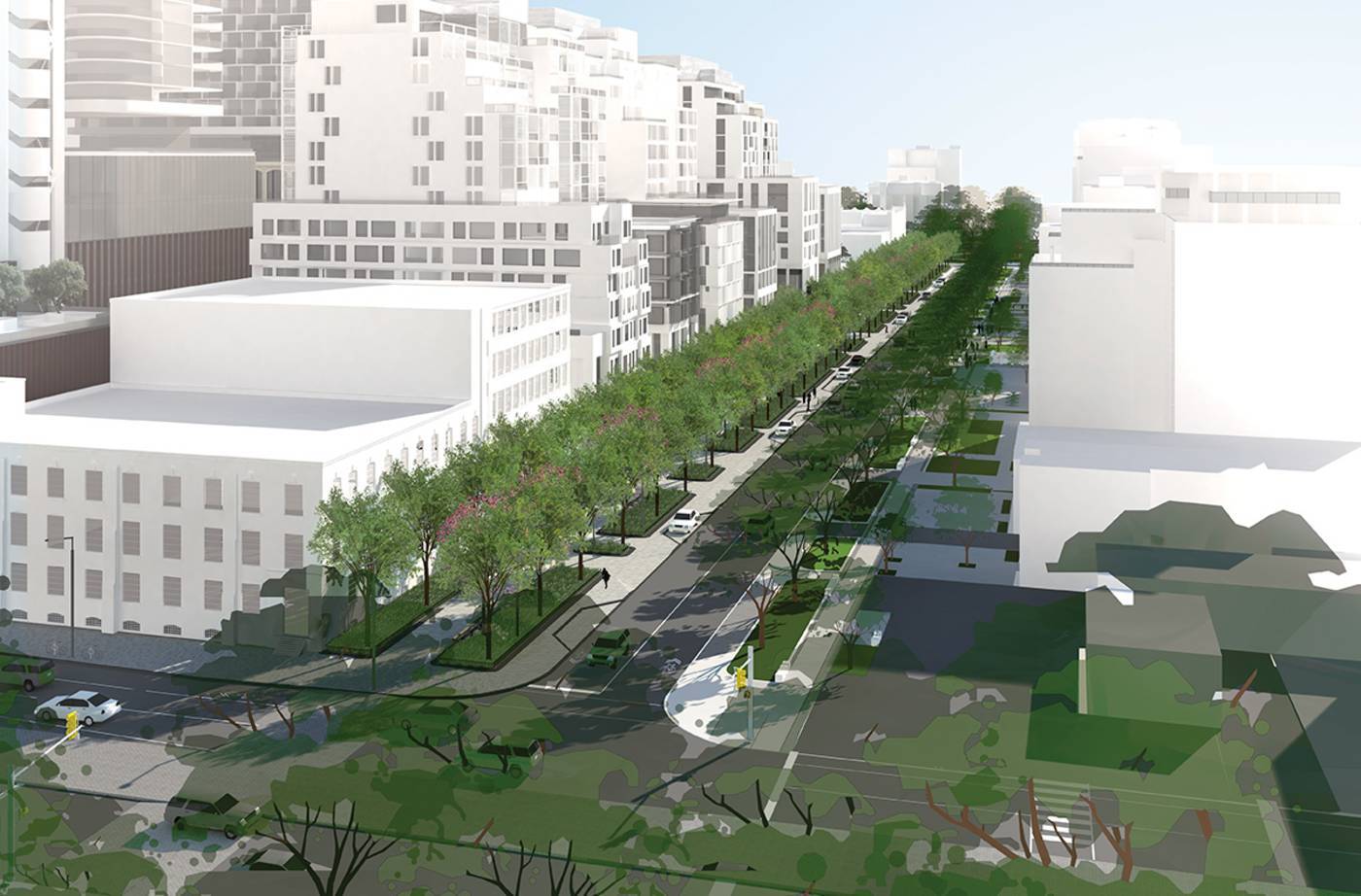 Wellington St. will also witness major improvements via The Well development, including this promenade from Claude Cormier + Associates.

With a stacked team of architectural firms, the vision for the site is a fully integrated neighbourhood with showpiece retail architecture and public space.

It's almost as though The Well has been dreamed up as the antithesis of CityPlace, the monster development on the other side of the tracks that struggled for many years to feel like a legitimate community. 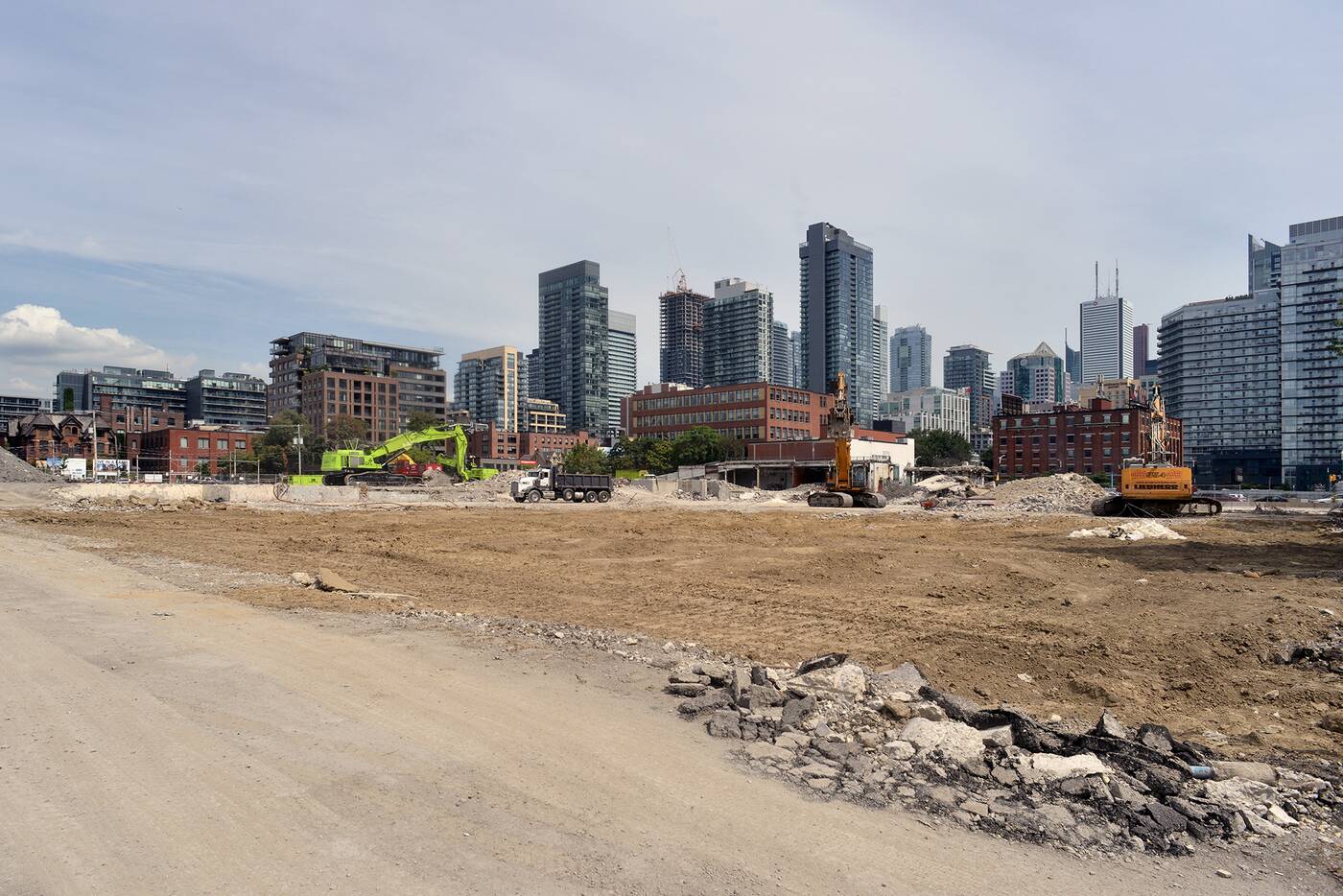 Here there will be cat-themed parks, an array of dining options, office space, and, finally, condos. The site is a heap of rubble right now, but it'll be a huge addition to the city when it's complete.

Across the street to the west, another massive development is in the works at 400 Front St. W. This one has been proposed as a four tower complex from architectsAlliance for State Building Group and Stanford Homes. Also mixed use, the development would consist of 56 and 60 storey condos and office buildings of 24 and 25 storeys. 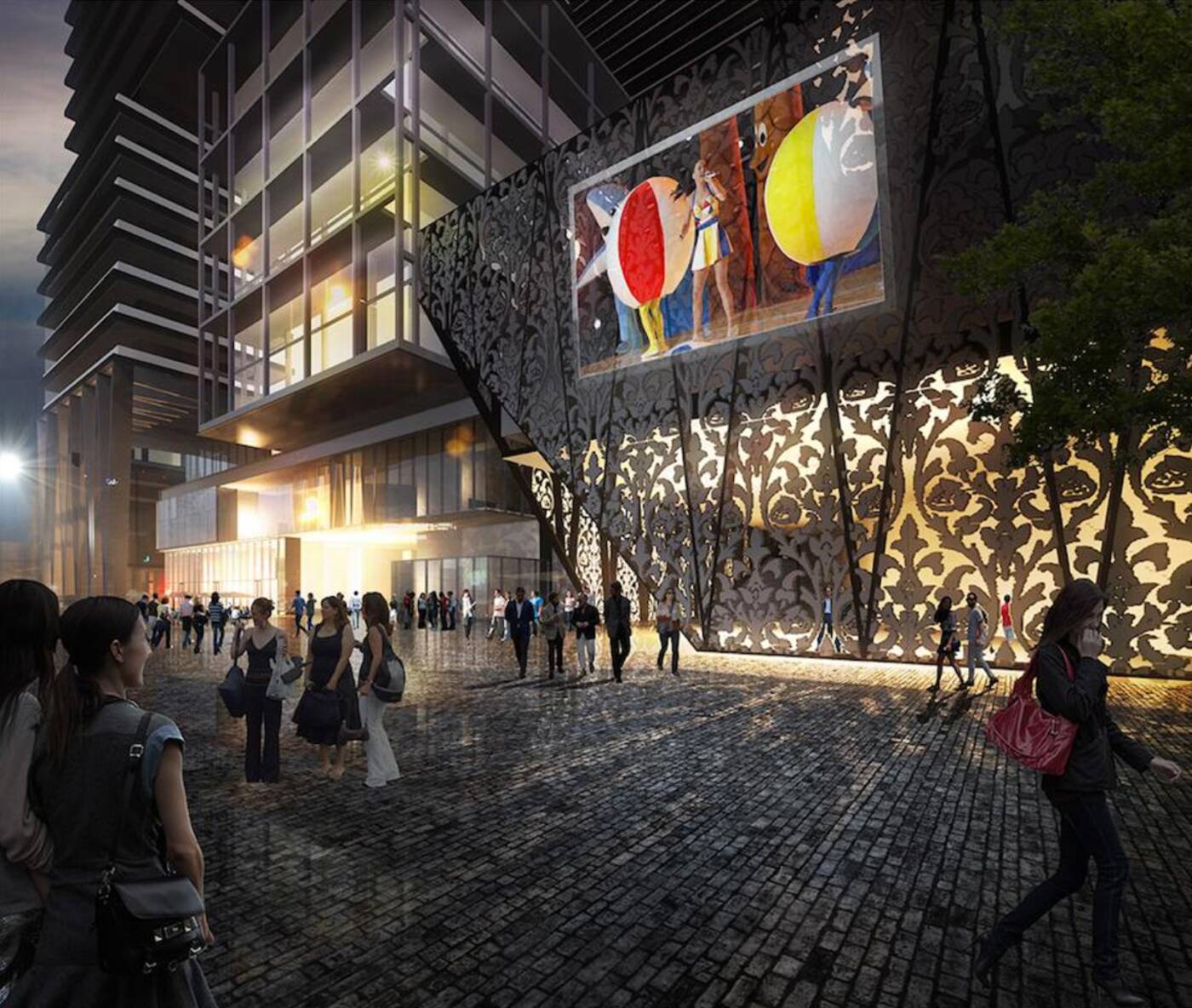 Whether or not the final project is built as proposed, however, remains up in the air. The plans for this development have gone to the Ontario Municipal Board after the City failed to make a decision within the allotted time frame. In any case, you can expect some very big here.

There's even more uncertainty and potential across the street to the south, where the dazzling Rail Deck Park has been proposed by the City of Toronto. This could be one of the most significant public space initiatives that Toronto has ever seen, but there are competing visions for the site. 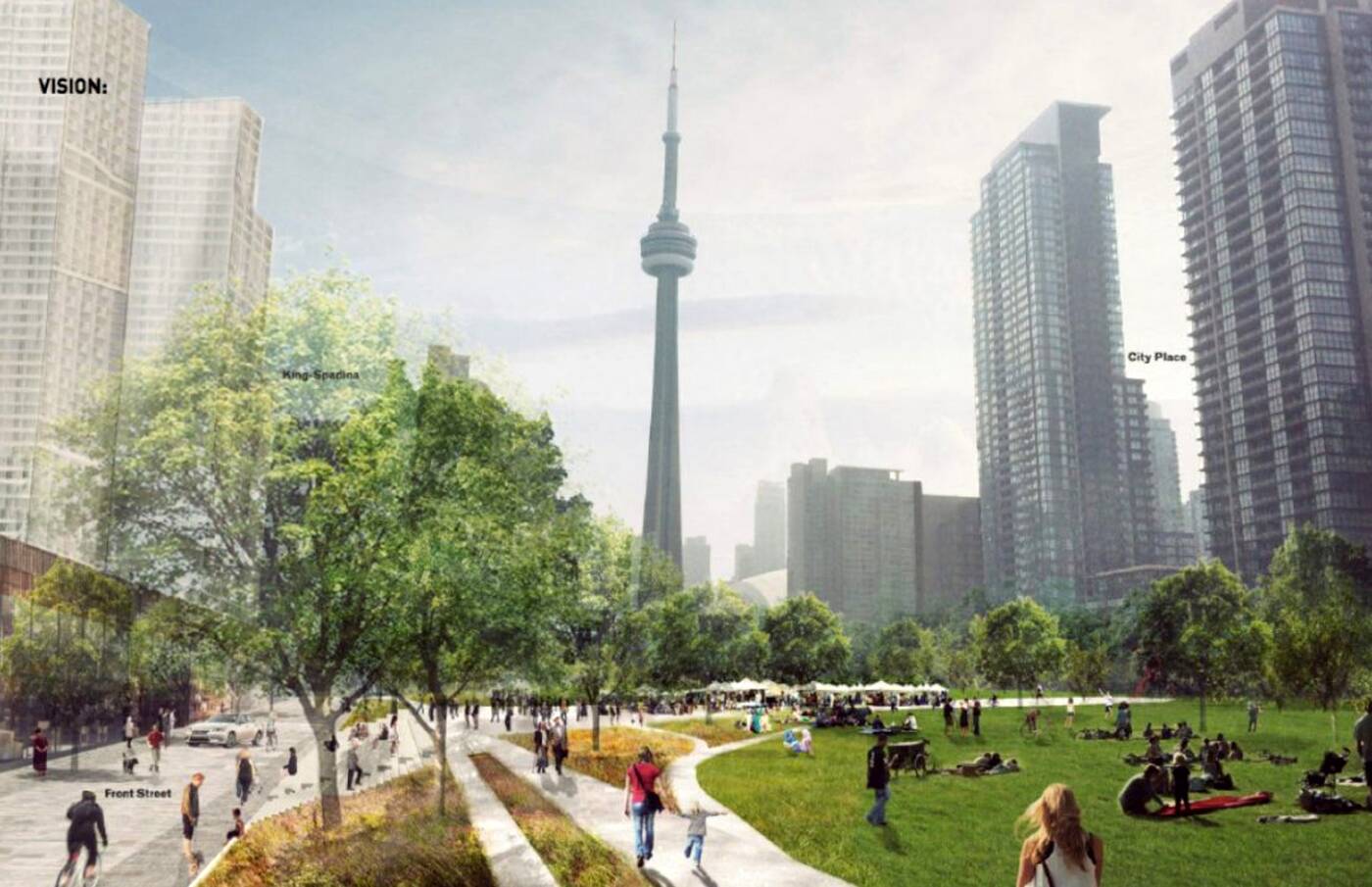 The City of Toronto's vision for Rail Deck Park.

The City envisions the area south of Front St. atop the railway corridor as a 21 acre park, one which would completely transform the way we collectively conceive of downtown Toronto. While feasibility studies are approved and underway, the air rights have yet to be secured and the project is unfunded.

Enter the ORCA Project from a development group going by the acronym P.I.T.S. It's proposed a plan that would witness the construction of eight skyscrapers on the north end of the site (i.e. just south of Front St.) along with a scaled back 12.8 acre park. 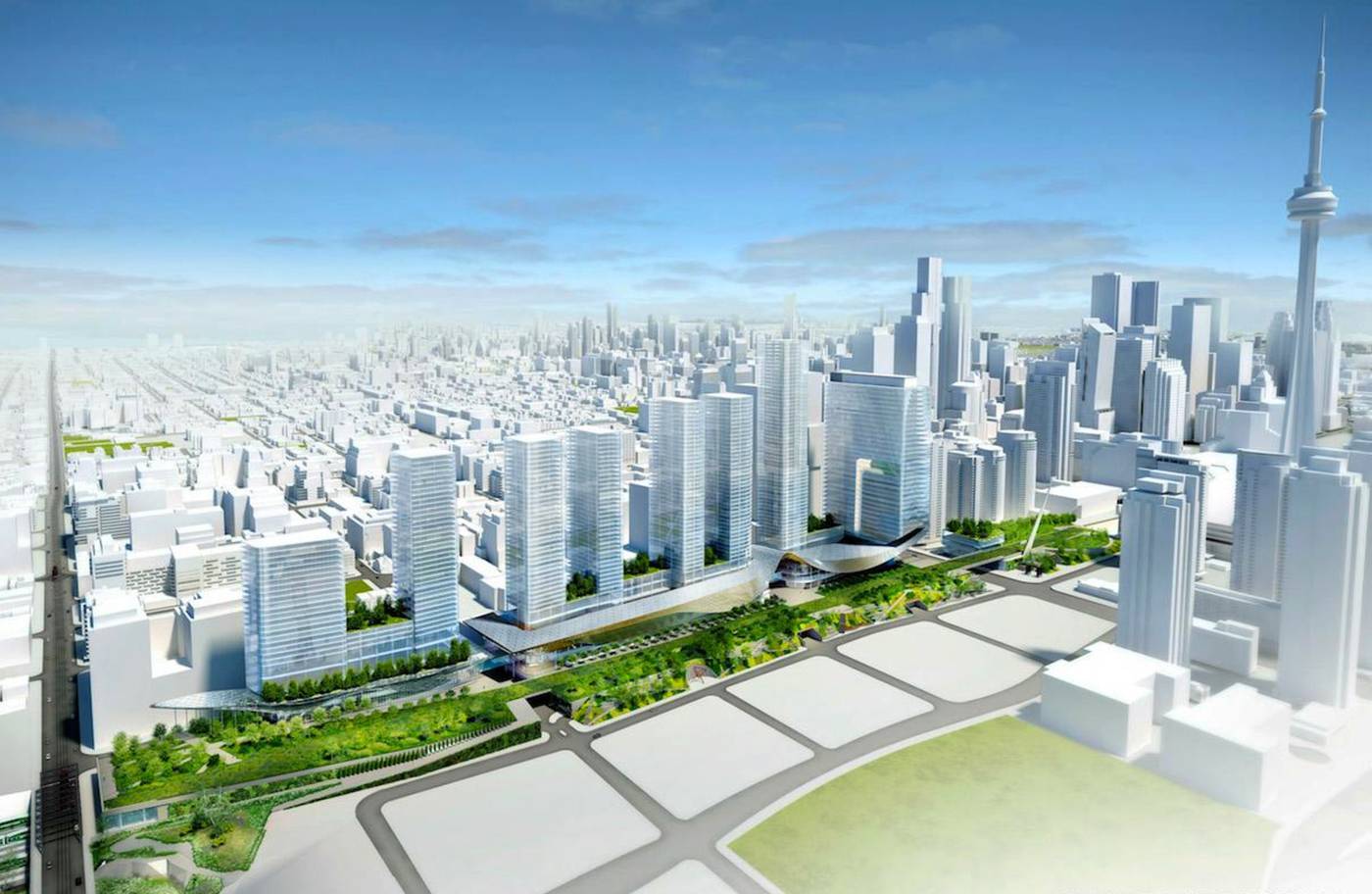 The P.I.T.S. group claims it has secured the air rights to the rail corridor, but that in and of itself doesn't ensure that it'll be able to proceed with its plans for the site. Given that it's competing with the City's own vision, the matter is sure to be severely complicated and drawn out.

What we do know is that the race is on to build a deck over the rail corridor, and whichever plan wins out will have a profound effect on the complexion of the city.

Fortunately, the city won't have to wait for the situation regarding Rail Deck Park to be resolved before getting excited about new green space in the area around Front St. In a few years, the western terminus of the street could have two parks that act as a gateway to the redeveloped area. 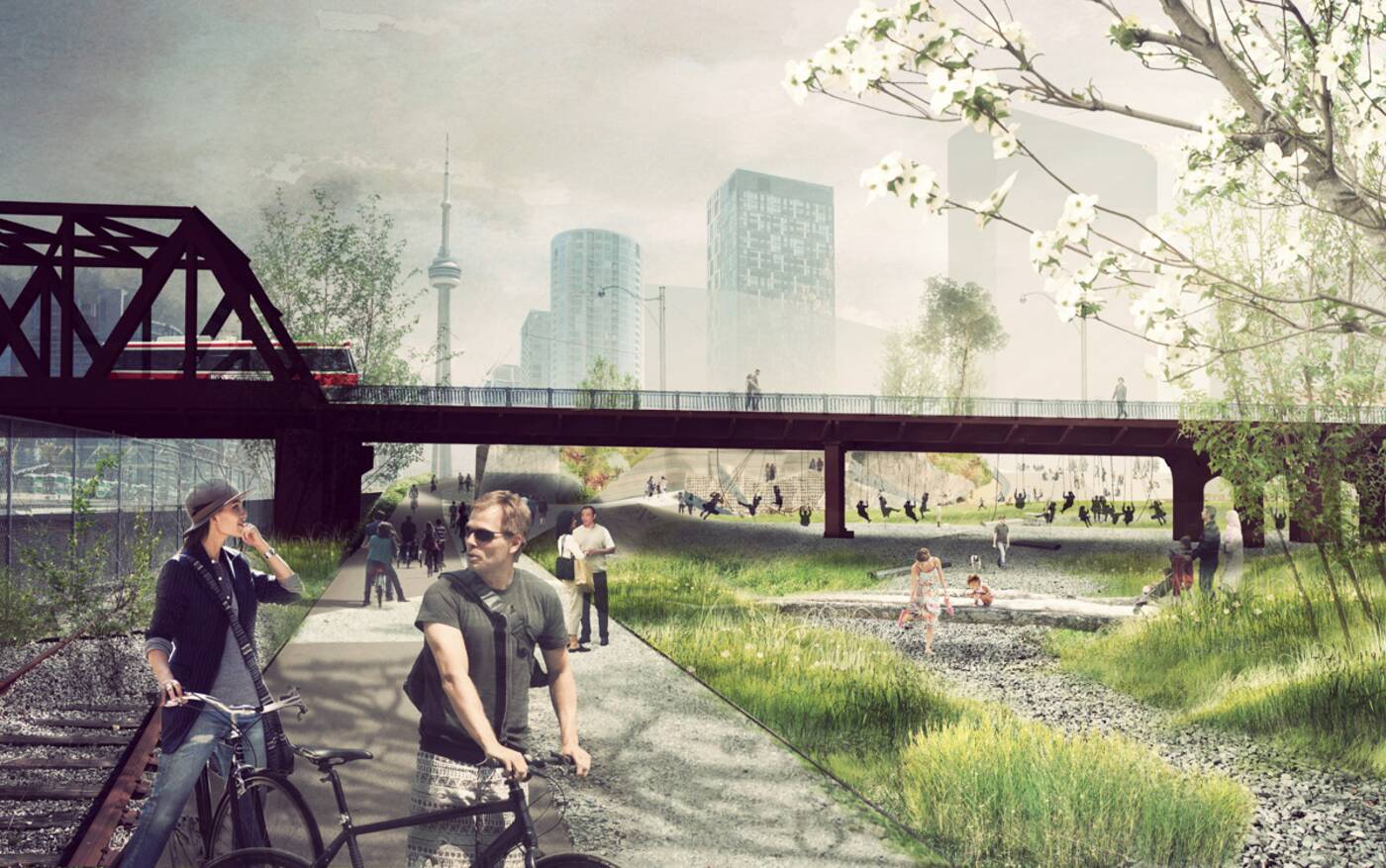 Mouth of the Creek Park would run under Bathurst St. Rendering by Public Work.

Of these, Mouth of the Creek Park is the one that's closer to realization. Designed by Public Work, the two acre park will connect the packed CityPlace neighbourhood with Fort York by carving out a green space at the foot of the Bathurst Street Bridge, right beside the Fort York Public Library.

This is on the other side of the tracks from Front St., but will be in close proximity to the many developments planned here, and if Rail Deck Park does happen, the two spaces would be virtually connected.

On the northwest side of Bathurst, across from where Front St. begins/ends, there's preliminary plans in place to build a park on the 2.8 acre site that used to be home to a lead smelting plant. It had been sitting dormant for years before the city decided to make it a green space.

The changes in store for this stretch of the city are remarkable in their scale. Surely, it will take years for some of these projects to get the green light, but the future is coming into view on the west side of Toronto's old lakefront street.