Toronto could expand water taxi service to the west side

So close yet so far away. Many Liberty Village and West Queen West residents can see Hanlan's Point Beach from their condo windows. In Parkdale, you can use various bridges to walk to the waterfront, but the Islands are still a distant dream.

Those living in southwest neighbourhoods across Toronto must trek downtown (exactly where most want to avoid on those hot days) to get to one of the city's best summer spots.

Both Toronto ferry service and water taxis docks are located in central locations along Queens Quay, something which makes less and less sense as populations increase in these highly dense areas to the west of Bathurst St.

Here is why there is no docking station on the western waterfront (for the moment):

The Toronto harbour is sheltered, making the water calm and somewhat predictable, which is why all docking stations are clustered along the waterfront between Spadina and Bay. "Once out of the harbour, conditions can quickly change, making the lake feel more like an open ocean," says Luc Cote, owner of Tiki Taxi, one of the Toronto's water taxi operators.

The licensing of the water taxi industry is still in its infancy (it began in late 2013). New pick up and drop off spots would require multiple groups to work together. The Toronto Port Authority, City of Toronto, Toronto Parks, Forestry and Recreation, Transportation Services and water taxi operators, amongst others, would all need to be engaged.

But this doesn't mean that a docking station isn't coming. 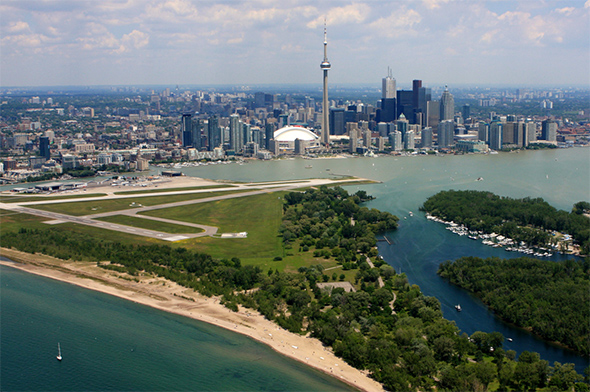 "The topic of expanding the water taxi service locations (both east and west) has come up in discussions and we will be considering the matter in the fall when we discuss the 2017 season," says Patrick McCabe from Toronto Parks, Forestry & Recreation, the body that oversees the Toronto water taxi industry.

"It needn't be public property, but there are questions of who owns the land and how the docking station would be operated", says Patrick. "Who maintains /pays for it, which operators can use it, meeting accessibility standards, safety of location, etc... are all things that would need to be considered."

Taxi operators like the idea. "We could run a route straight from the shore to Hanlan's Point - it would be the quickest and the safest - and I think it would be great,"says Luc of Tiki Taxi.

"Ideally the pitch would come from the operators", answers McCabe. "If they were to band together with a plan of sorts, it's reasonable that a location could be found and that the city would work to make it happen."

As Liberty Village, West Queen West and the adjoining neighbourhood populations continue to grow, the Islands may soon be that much closer, but it'll take a collective will to accomplish this task.

Have your say. Where else should Toronto water taxis operate from?