What it's like to commute on the UP Express

Now that the price of the UP Express has been cut, it's worth thinking about what kind of an alternative the service provides for commuters from the west side of Toronto. Needing to get downtown in hurry the other day after learning all about the new MOCA, I decided it was the perfect opportunity to hitch a ride on the UPX.

It took about four or five minutes to get from 213 Sterling Rd. to the Bloor UP station, which was nearly deserted when I arrived. Fortunately, you don't really need anyone around to facilitate boarding the train. PRESTO users tap-in as they head up to the platform, and those buying single fares can use a machine.

The train arrived three minutes after I got to the station, during which time I had a brief conversation with a platform attendant who confirmed that ridership is way up since the fare slash. He estimated the increase at triple the number of riders, though this is, of course, merely anecdotal. 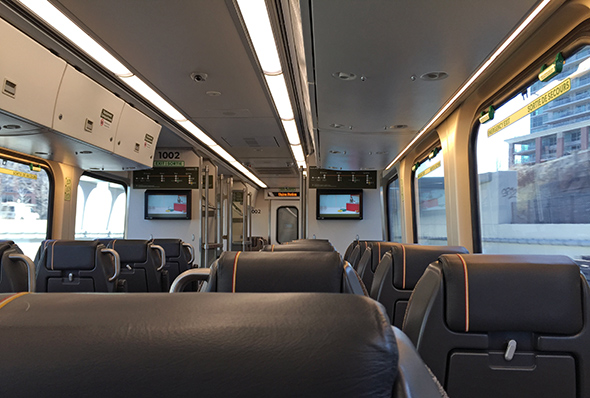 I was one of two people to board at Bloor on the 12:30 p.m. train, which contained only a handful of passengers. After waiting for about two minutes, we headed towards Union. My ticket was promptly checked as we departed, and from there I was left undisturbed.

Here's the best part of the ride from a commuter's perspective. It's super fast. From pushing off at Bloor to arrival at Union took almost exactly six minutes. I didn't even bother using the free WiFi because I was more interested in checking out the scenery.

The speed of the trip actually gives you new perspective on the city. It's amazing, for instance, how quickly you pass the Gladstone Hotel after having just left the Tower Automotive Building (like two minutes). This train moves a lot quiker than a subway.

Upon arrival at Union, I had to get to University and Queen. To take the TTC would've added cost to the trip, so I decided to walk. This took about seven minutes. All told that made the trip around 25 minutes, about the same or a hair faster than taking the TTC. Despite the speed of the train, the extra walking nixed any major time savings. 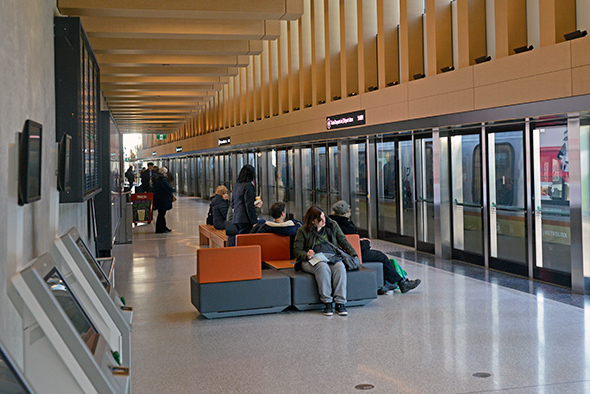 At the end of the work day, I was curious what the UP Express is like at rush hour, so I took it back to Bloor for another $5.30. I live near Bloor and Lansdowne, so it's only a short walk from the station.

The ease of travel and speed of the train was about the same, though I did end up waiting for about seven minutes for it to arrive at Union. That wasn't quite enough time to enjoy all that the lounge has to offer, but it's still a nice place to wait.

By the time we pushed off, the train's seats were full. Based on the lack of luggage the majority of passengers were carrying, I'd say that only a few of the riders were heading for a flight.

My total trip time home was about 35 minutes (given the extra wait for the train and walking distance). That's not too bad, but it's certainly longer than the TTC ride to and from my office. In other words, you pay a double premium (time and money) for use of the UP Express unless you live within five minutes of the stations on both ends. 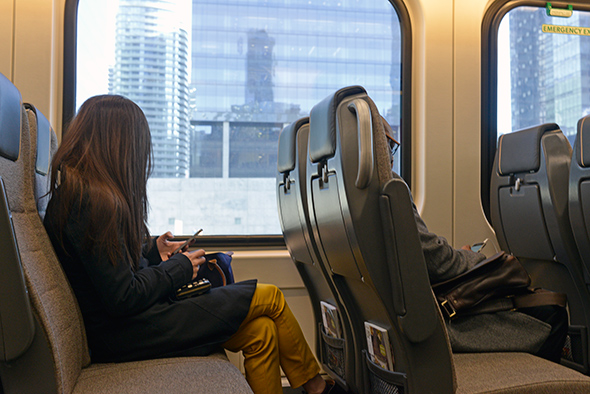 So, what's the verdict? With its recently reduced fare, the UP Express is a viable transit option for commuters who live and work relatively close to a station, but unless there's a major delay, there's almost no reason to get off the subway to use the service.

If anyone would particularly benefit from the UPX as a commuter, it's those who live near Weston Station, as the price for a two-station trip is only marginally more than from one. For my part, I was impressed with the train ride, but given that it's not faster than my TTC commute, I'll likely not be riding the UP Express a whole lot.

Have you commuted on the UP Express? Share your thoughts in the comments.