10 Toronto intersections as they were 100 years ago

It's amazing to watch Toronto intersections change and evolve. Photos help fill the gaps, illustrating how the places we know came to be.

While some transformations have been dramatic—Danforth east of Pape, for example—others have remained, against the odds, relatively untouched: King and Spadina has sported mostly the same cluster of buildings at its northwest corner for more than a century.

Here are 10 intersections as they were (roughly) 100 years ago. 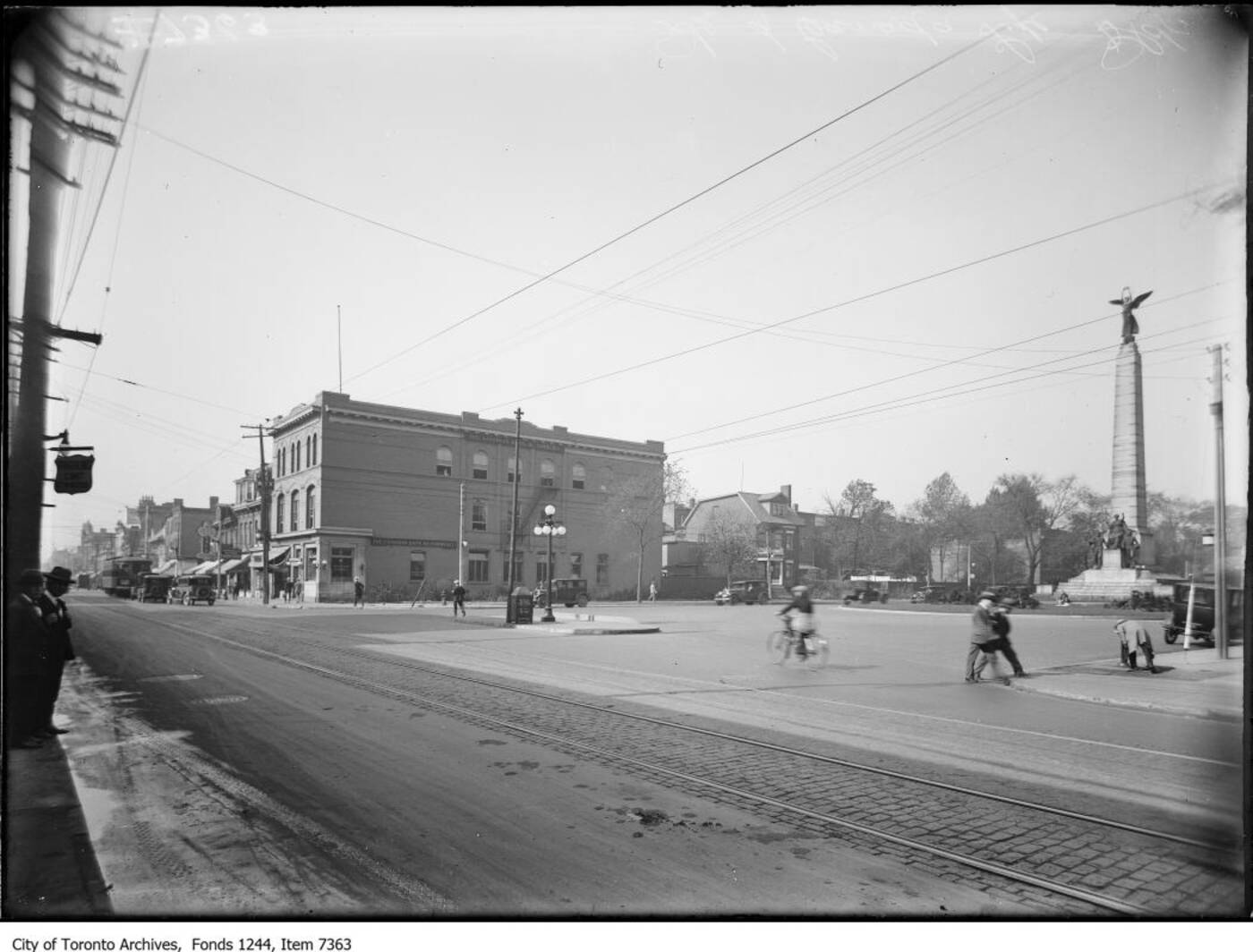 The intersection of Queen and University in 1924.

In 1924 when this photo was taken, University ended abruptly at Queen, just south of the Boer War memorial. It wasn't until 1931 that the road was extended south to Front as part of a scaled back beautification plan for the downtown core. Had it been fully realized, several Parisian-style avenues and a grand interchange reminiscent of Picadilly Circus would have been built south of Queen between Simcoe and Yonge. Today, the Canada Life Building dominates the same view. 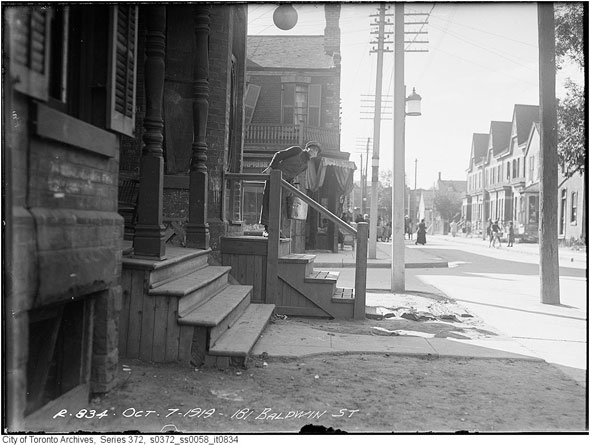 The corner of Baldwin and Kensington on October 7, 1919 looking west.

The Dirty Bird has replaced the home on the left. There's still a grocery store on the corner behind the boy, albeit in a different building. When this photo was taken, Kensington was a predominantly Jewish neighbourhood. Kosher butchers, grocers, and bakers lined the narrow streets of tightly packed Victoria homes. By the end of the 1920s, Kensington would be the centre of Jewish life in Toronto. 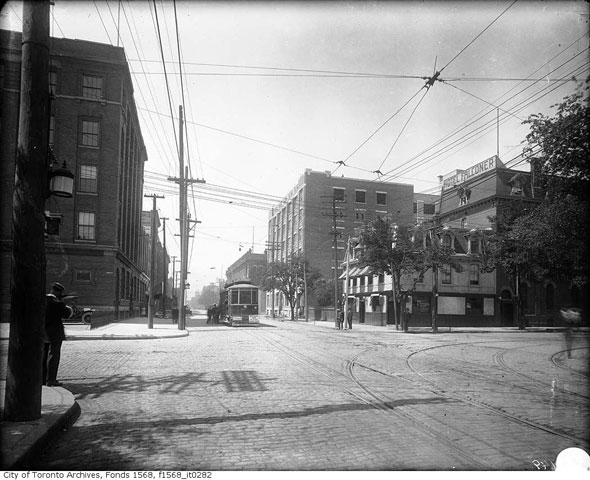 The intersection of King and Spadina is mostly unchanged.

Considering more than a century has passed, the northwest corner of King and Spadina looks remarkably similar. The Falconer Hotel is still standing as the closed Global Village Backpackers has been turned into an innovation office. In the early years of the 20th century the Spadina streetcar didn't have its own right of way and only reached as far south as King. 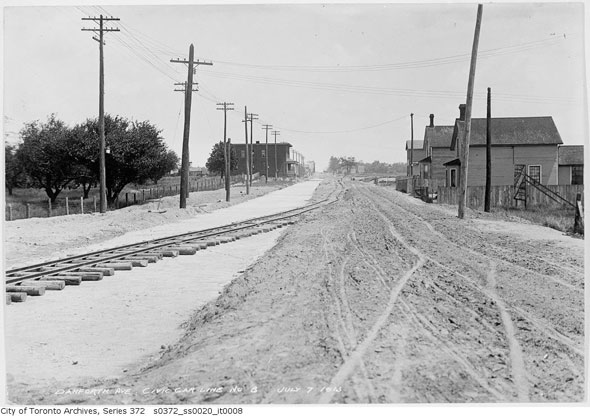 Danforth and Pape looking like a frontier town on July 7, 1913.

The same view today, at the east end of Greektown towards Donlands, is completely unrecognizable. Those winding tracks would become the Danforth streetcar line and eventually the Bloor-Danforth subway. Within 10 years of this photo, both sides of the Danforth beyond Pape would be developed. 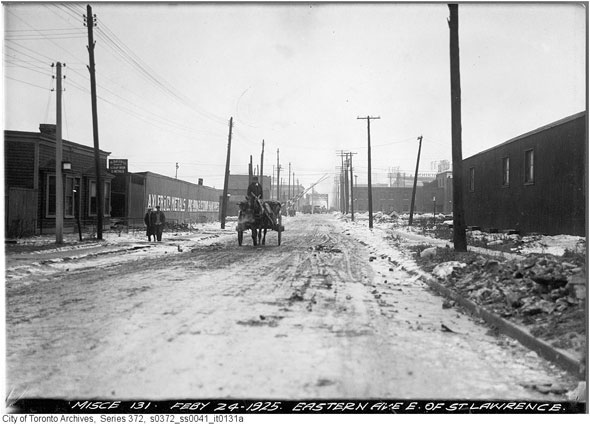 Construction of the Eastern Avenue ramps over the Don River has completely changed the streets interaction with St. Lawrence St., a small and once heavily industrial street that runs south from King. The old intersection is currently under heavy construction and has been for some time, but when the West Don Lands is development is complete this view will include a new park. 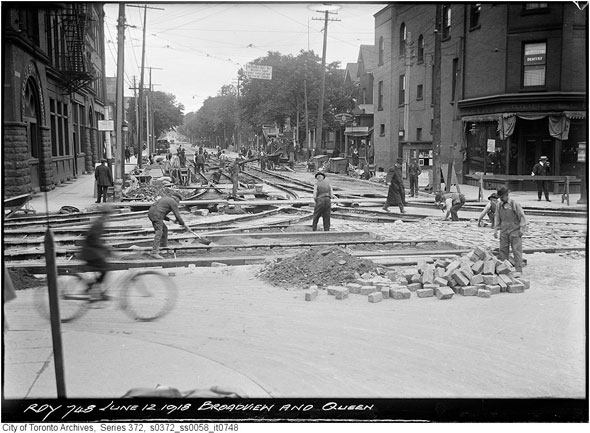 Queen and Broadview has been a key transit interchange for almost as long as Toronto has had streetcars.

Today, this intersection is where the 504 King and 501 Queen streetcars go their separate ways, but in June, 1918, it also served the defunct Broadview line. That year Dingman's Hall was home to a branch of the Royal Bank of Canada on the ground floor and conventional hotel rooms above. By the 1970s the building had completed its transformation into bawdy strip club. 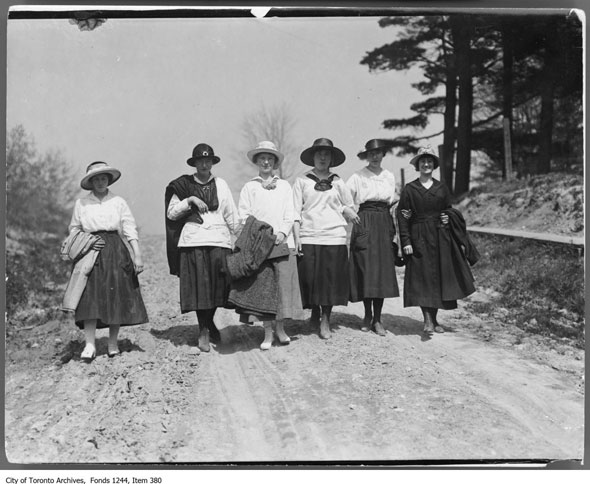 A hundred years ago, Eglinton near Bathurst was a tree-lined strip, unpaved and quiet enough that one could walk down the middle of street without fear of being run over. Judging by the hill in the background, I would guess this image was taken at the present-day intersection of Eglinton and Old Forest Hill Rd. In 1913, both sides of Eglinton had been subdivided, but little had been built. 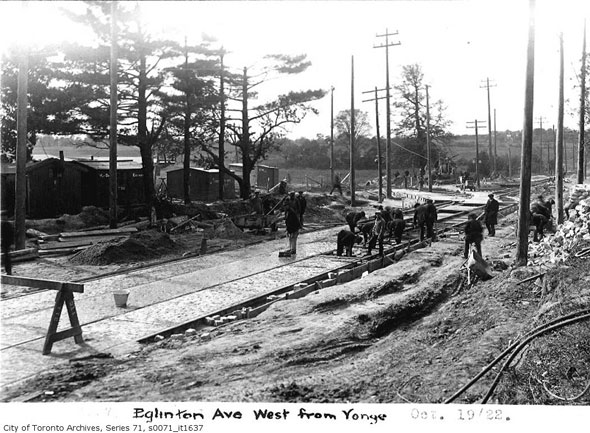 Further proof that Eglinton was almost completely undeveloped a century ago, this view of the south side of the street just west of Yonge shows fields and trees. The construction work being carried out here is likely for the TTC streetcar yard that was located on the site of the old bus bays until construction of the Yonge subway in the early 1950s. The intersections is once again under construction, this time for the Eglinton LRT. 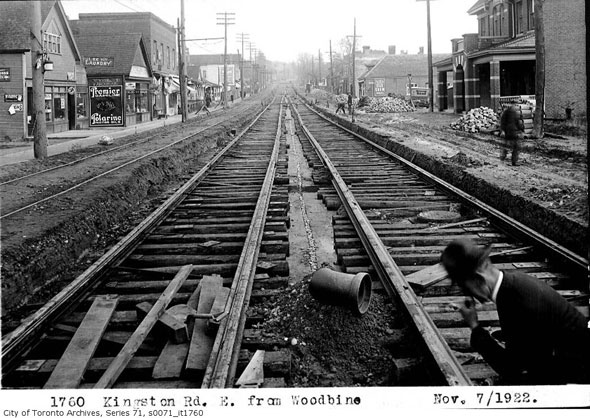 Historically the intersection of Kingston Rd. and Woodbine was the centre of the former village of Norway. The community's identity was fading at the time when this photo was taken, and now it has all but vanished (Norway Cemetery is the most conspicuous remainder.) As far as I can tell, none of the buildings in this photo remain today. 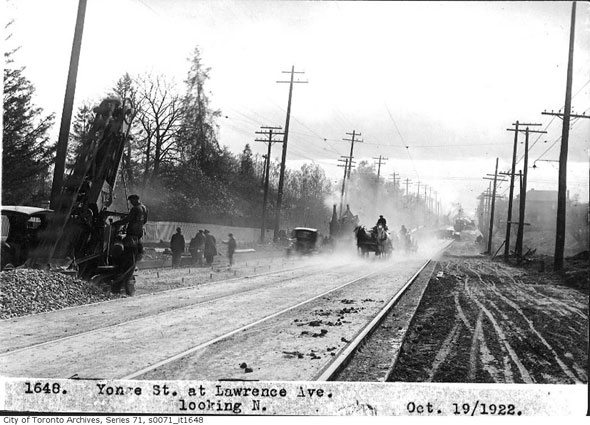 Yonge and Lawrence under construction in 1922.

It's October 19, 1922 and Yonge and Lawrence is showing the first signs of development. The streetcar tracks are part of the now-defunct Yonge streetcar that was replaced south of Eglinton by subway in 1954 and into North York by a trolley buses. 93 years later, the view is completely different. Office buildings and midrise apartments have replaced trees and gardens.