There are big plans for John Street, as the City and the Toronto Entertainment BIA work to see the street become a "cultural corridor." What that means in more concrete terms is that an increase in pedestrian space is on the agenda for the street in an effort to make it something of a destination rather than merely a thoroughfare. In keeping with the approved Environmental Assessment of the street, the first signs of what the transformation might look like are currently on display leading into the summer. The City has recently installed a series of planters along the east side of John between Adelaide and Queen as part of a pilot project to test out how a more pedestrian-friendly design might work. 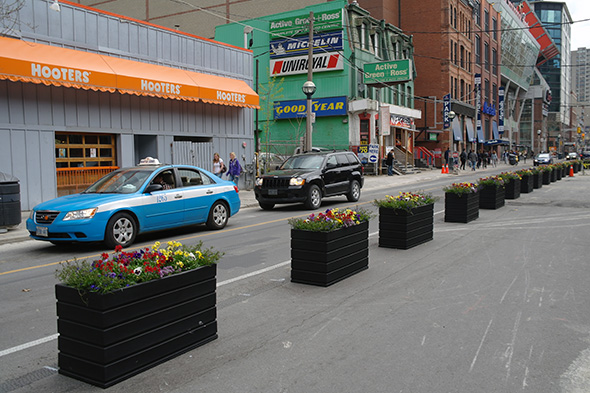 Somewhat similar to the parklets installed on Church Street last summer, the infrastructure is currently temporary. The planters will be in place until October 12, and could continue to return on a seasonal basis until full blown construction commences on the Street. The added pedestrian space comes at the expense of turning lanes through this short stretch, so technically doesn't cost much in vehicular capacity. It is, however, a bit tight for cyclists now, so ride with care.

This is only a glimpse of the major redesign in store for the street, but it looks promising. The planters are a hell of a lot nicer than bollards and the added space certainly comes in handy during peak times like rush hour and weekend nights when the area swells with foot traffic. For more on the project, check out this Metro Morning interview with Harold Madi, Director of Urban Design for Toronto.