5 Toronto laneways and the stories behind their names

Just 10 per cent of Toronto's more than 3,000 public laneways have a name. Usually the titles recognize community figures, events or local traditions, but many are delightfully strange with brilliant backstories.

Case in point: Crestfallen Lane. The city is considering naming a little service road in Seaton Village after a horse "with sad eyes" that Toronto vaccination pioneer Dr. Gerry FitzGerald injected with small doses of diphtheria. FitzGerald was developing an antitoxin for the disease, and he would use half a dozen other animals rescued from a glue factory to help tackle rabies and other infectious diseases from a stable on Bloor Street.

Giving a lane an official name helps police, fire, and ambulance services quickly find the tiny roads that are officially distinguished by a four-digit number. The city is open to ideas, but all submissions must present a positive image and steer clear of lewd acronyms. Historical or geographical relevance is also a must.

Here are the stories behind five unusual lane names in Toronto.

Old Sweats Lane is marked on most maps as Industrial Parkway N., but that's no fun. Hidden in the northeast corner of the city near Kingston Road and Ellesmere, the short stretch of road provides access to a branch of The Royal Canadian Legion.

According to Les Goodman from the Branch 258, "old sweats" is a common nickname for soldiers with lengthy service records, particularly those that served in the world wars or Korean War. The legion, one of the few in old Metro with a step-free entrance, used to put on a popular old sweats dinner that inspired the name of the lane.

Surely a contender for the happiest lane in all Toronto, Ice Cream Lane off the Danforth at Dawes Road is named for the Maple Leaf Dairy located nearby. Famous for its outlet store that serves massive portions of fresh ice cream in the summer, the business was founded on St. Clair in the 1930s but moved south in recent decades.

The sign outside - "May All Your Days Be Ice Cream Days" - best sums up the old-school little parlour with its bare-bones wooden interior and the lane it gave its name to. 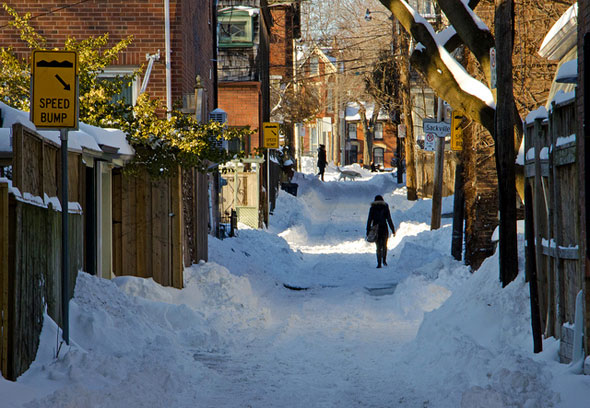 Picking Coke Lane at the end of Cornwall Street in Cabbagetown is named for the rather bleak practice of "collecting fragments of coke from ash piles ... in order to transport them to private homes as fuel to heat a house," according to the city.

Coke is a high-carbon fuel made by extracting gas from coal. It was often discarded in giant ash piles by the Kemp Manufacturing Plant, a steel mill once on the site of three high-rise apartment buildings at Gerrard and River streets that was within walking distance of many Cabbagetown residents.

Another Cabbagetown beauty, Magic Lane is named Doug Henning, a Toronto-trained illusionist who was an 8-time Emmy award nominee and winner for NBC's Doug Henning's World of Magic program. Henning also had top-billing on several Broadway musicals, including The Magic Show and Merlin.

In later life, the magician lived at 94 Winchester Street and became active in politics. He was the Senior Vice President of the Natural Law Party of Canada, a party based on the principles of transcendental meditation, and ran in the federal riding of Rosedale - now Toronto Centre - in 1993. He died in 2000.

The boys of Major Street - Chucky, Porky, Solly, Harold, Red, and Joe - were honoured with four others in the name of a laneway off Harbord Street in 2013. The six teenage friends fought at the same time in the second world war, but only two came home. Joe Greenberg, known locally as Dr. Joe, was one of those who returned. The other was his cousin, Red.

Major Street was home to a disproportionate number of young men killed in combat. A powerful Toronto Star story published for Remembrance Day 2009 carried the headline "the boys of Major Street," and the name was officially unveiled for the previously unnamed stretch last year.