What else could Metrolinx do with its PRESTO cards?

It was a long time coming, but the TTC last month signed off on PRESTO, provincial transit agency Metronlix's contactless payment card system, with a promise to have readers in every bus, streetcar, and subway station in time for 2016. The card, which holds a balance uploaded from a credit or debit card, is also compatible with other regional transit services, including GO, making it easier than ever to pay a fare in the GTA.

The scope of a widely adopted instant payment system could potentially be very broad. What service in Toronto couldn't be made better with a quick way to pay? According to Robert Hollis, the managing director and VP of PRESTO, it would actually be very easy to hook up readers to BIXI bike stations and Green P municipal parking meters.

"From a technology point of view, that's the easy part," says Hollis, "you can get a proximity reader on a number of devices so the ability to tap a card is really about having the equipment â the bigger challenge is how you're going to manage the payments in the back end."

The main hurdles to expanding PRESTO beyond transit are federal rules that govern all forms of currency within Canada. "If you're setting up an e-purse payment system you have to follow Canadian Payment Association rules," continues Hollis. The CPA oversees all electronic payments from ATM debit card withdrawals to a credit card pre-authorizations. A total of $179.4 billion of transactions were processed under their stewardship in 2011.

"Our focus is on transit we're still rolling out across Ontario...so our resources will be focused on what we believe is our prime objective. Once we have cards in people's hands I think it says to us 'what other things could we do with that card'...we have been looking since day one for opportunities to expand our card, it's just not the highest priority for us right now." 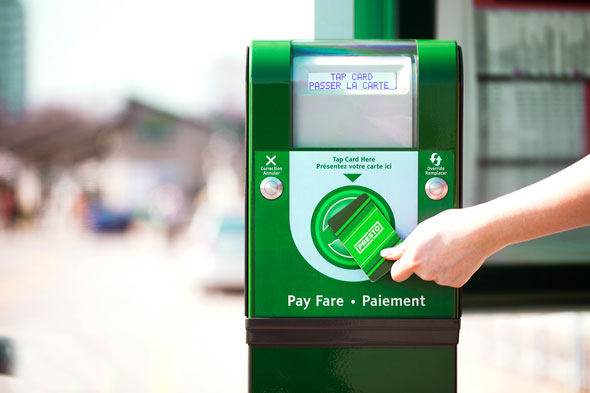 A focus on transit doesn't rule out BIXI, taxi companies, parking lots, and ferries adopting PRESTO. I would argue Metrolinx's next move after getting the TTC up and running should be to go to these companies and work out a way of making contactless payment seamless across all forms of transit in Toronto. Paying for a coffee and a newspaper, as one can in New Zealand with the Snapper card, might be a long way off but there's no reason why renting a bike or hopping over to the Islands can't be as simple as waving a card.

Adding other businesses such as Tim Hortons or Gateway Newstands, the company contracted to operate convenience stores and bakeries within the subway system, to its roster at a later date could be a nice sweetener for its users.

Kevin McLaughlin, president of Autoshare, says his company approached Metrolinx about using PRESTO cards as a form of ID for customers collecting a vehicle. He says so far the reception has been decidedly lukewarm even though he believes his company falls under the umbrella of "transit," Hollis' focus.

"We want to work with PRESTO," he says, "I don't want to be negative towards them because I'm not, [but] sometimes it's unfortunate when we see folks in Montreal who basically get a greener light to start talking about these ideas and yet meanwhile we're ready to go."

"It just seems like in this day and age when government is struggling with transit and you've got this huge opportunity you should be looking at other cities to see what they're doing with [fare cards]. It's almost a scandal that we're not doing something with it."

That said, Autoshare is likely to go ahead with PRESTO integration with or without Metrolinx. The readers the company is installing its cars will authorize pick-ups using a unique ID number stored on each card without debiting the balance. McLaughlin also hopes to accept similar contactless cards from Montreal's transit system.

Metrolinx released a statement in response:

"PRESTO has spoken previously with Autoshare. They are aware of our mandate, and while we understand the potential for expanding partnerships in the future, today our focus is to integrate transit - and we are doing that."

What are your thoughts? Is Metrolinx right to stick to traditional transit systems or should it be working with companies like Autoshare and BIXI to develop additional uses for its cards?