Take a ride across the Gardiner or a stroll along Adelaide, and you'd think Toronto was all glass towers and temporary cladding. But the cognizant Toronto resident knows the city has, indeed, retained relics of architectural charm, which are evident just so long as you don't look up.

One of the more recent cases (or casualties, depending on how you look at it) is the row of Victorian towns on Sultan Street just southwest of Bay and Bloor. The heritage structures, which were built back in the 1880's, are now the base for a new condo office concept that will rise nine storeys and tout its own healthy presence of glass.

Developed by St. Thomas Commercial and designed by Hariri Pontarini Architects, units in the structure are now available for sale to businesses an at average of $830 per square foot, with three floors for occupancy in the "podium" heritage structures and six available atop. Dubbed 7 St. Thomas, the project boasts curved fritted glass, stone detailing, and a starkly different impression from the townhomes below.

Not that that's necessarily a bad thing, mind you. But with so many urban examples of heritage properties moved aside or built upon â from relatively small projects such as the James Cooper Mansion condo devlelopment to the massive ROM Crystal overhaul â Toronto's so-called heritage projects seem to be increasingly perceived as ripe for the taking. Rarely left to revel in their own charm (where's the potential capital in that?!) hundred-year-old structures are often literally pushed aside for something new and lucrative. 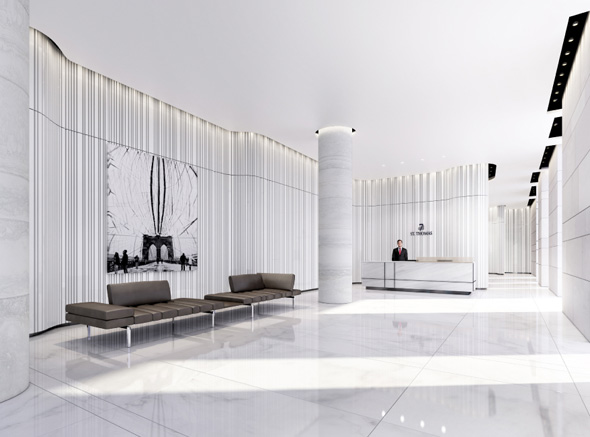 I get the need for urban development and the pressures of added density. But it doesn't help that the "something new" added to heritage projects is often obtrusive in visual contrast (sorry 7 St. Thomas, I'm talking about you) and overwhelming in scale. The effect, in my opinion, is a cheapening of heritage charm and somewhat grotesque streetside juxtaposition. But that's just my hopeless romantic heart bleeding all over the newly inlayed brick sidewalk.

What do you think of the design for 7 St. Thomas? Add your comments to the thread below.