East Village Leslieville is a townhouse-style development slated for Gerrard just east of Greenwood. And yes, this is Little India, er, Leslieville — just not the indie-cafe-saturated, cupcake-laden part. An Urban Fabric Development Inc. and Aykler Developments project, East Village Leslieville will house a total of 31 units, with one-bedroom suites occupying the main floor, and two-bedroom, two-storey units on the second (and third). Perhaps one of the more affordable builds in the works for south of Bloor, this project comes with few extra frills beyond the pleasure of a little outdoor privacy. Here is a closer look at East Village Leslieville. 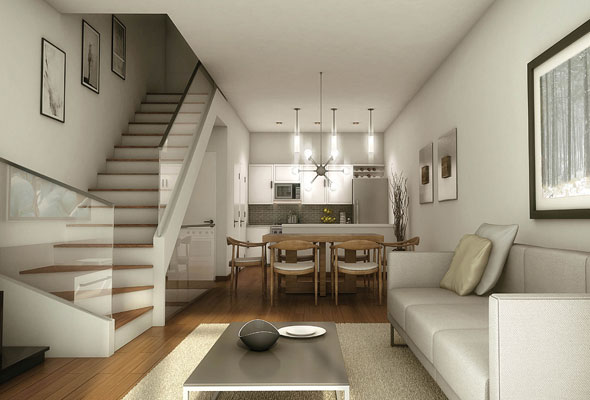 An introvert's dream. While all of those Queen West and Richmond Street suckers are sharing their condo terraces with other building residents, East Village Leslievillers can enjoy a private lounge on their own rooftop patios. That's right — no need to put on pants to enjoy a good book in the weekend sun! Indeed, the larger townhouse-style two-storey units come with private rooftop terraces of about 200 square feet. That's not huge, mind you, but privacy is privacy. And speaking of, the East Village layout is ideal for avoiding those forced neighbourly conversations and awkward hallway run-ins. While some enjoy such interactions in the name of "community," I'll take my direct-unit-entry and pants-less weekend reading over a "Condo Residents Memorandum" every time.

Onto cost: What is this? A new Toronto build priced at under $500 per square foot?! Did someone forget to carry the 'one' or something? Believe it or not, early birds can snag a little piece of the Toronto real estate market for potentially as low as $480-ish per square foot with an East Village unit. Though as anyone who has ever considered buying a preconstruction knows, prices will have likely gone up by the time you finish reading this sentence. Even still, $500 per square foot is certainly not too shabby, especially considering some other new builds that are going for $700 per square foot or more.

Those other new builds, too, tend to gussy up their common areas with expensive frivolities such as virtual golf rooms, infinity pools, and yoga studios (you know you're getting old when you use the phrase "expensive frivolities" in common discourse). While an infinity pool is pretty exciting for the first few weeks, its lasting presence can take a toll on monthly maintenance fees. East Village, wisely, has kept extras to a minimum, which will help to keep its below-average maintenance fees low for the long haul. Townhouse-style builds, however, can incur sizeable expense (which trickles down to the homeowner through maintenance fees) when it comes to contracting out snow removal services. The specific damage in this case, of course, remains to be seen. 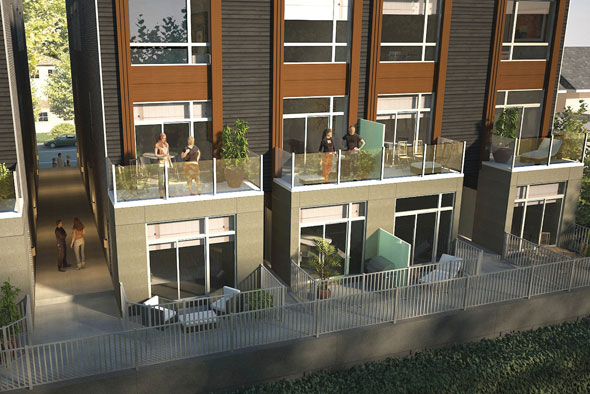 Eh, Gerrard and Greenwood isn't exactly the greatest. Sorry, marketing team. While I'll concede that this spot has all the potential to flourish — especially with a streetcar right outside (though the noise is another consideration) and Greenwood Park a few steps away — it's certainly not "Leslieville" as we know it a few blocks further south towards Queen. The adjacent Indian Bazaar is very much in a state of transition (to put it kindly) at present, and the character of the immediate area remains a question. Plus the nearby Gerrard Square Mall isn't exactly an example of urban thrive. That's not to say, however, that Gerrard East can't become a flourishing east-end community, but just that its future remains unclear. If you want peace of mind, best to head further south.

Now, let's talk about unit layouts. While I'll admit that all of the two-bedroom, two-storey units have me swooning, some of the one-bedroom and one-plus-dens seem a little impractical. First off, if you want a real bedroom (read: with a conventional door), you'll have to look at units of at least 500 square feet (unless you try to customize your floor plan with the developer). Smaller units, as they are currently laid out, necessitate walking through the bedroom to get to the washroom (which is not ideal especially when entertaining guests). The kitchens, too, are simply walls of appliances set in the narrowest part of the unit, offering basically a corridor space in which to cook and prepare food. Again, not ideal, to say the least. 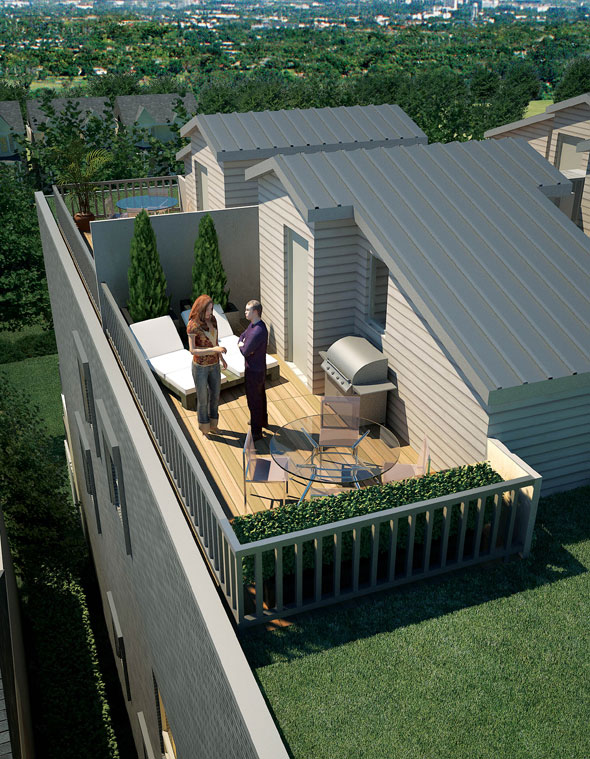 I'd like to see a little more area development before I'd consider dropping a wad of cash. Then again, those early Apple investors are laughing all the way to the bank.