Lofthouses at Corktown District represents the second phase in a two-part King East project by Streetcar Developments. The concept is a "district," if you will, of four neighbouring structures; 52 Sumach Street, 549 King East, 569 King East, and the Lofthouses at 510 King East.

Akin to Streetcar's Queen West plans, in which nearby condos share common areas, the happy dwellers at these Corktown structures will share specifically in the Lofthouses' riches (read: amenities). But don't feel bad for the would-be residents forced to share their billiards table; they've got two storeys, 12-foot ceilings, and a nifty-sounding (if obvious) name for their new townhouse/loft hybrids. Here is a closer look at the Lofthouses at Corktown District. 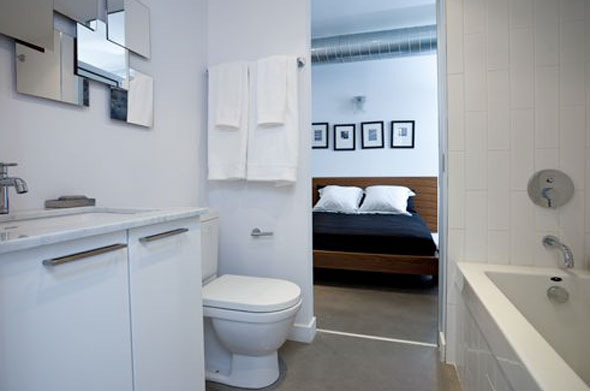 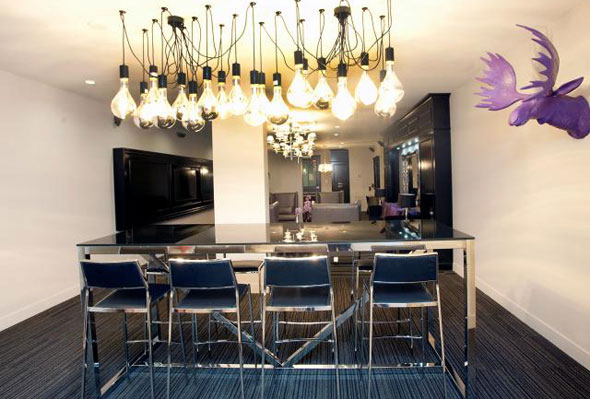 These are not the typical "shoebox in the sky" real estate drains of your (late 20's, early 30's) life savings. With a suite at Lofthouses, you'll actually get some room to stretch out, which is the least you should get after all of those pesky closing costs. A Lofthouse suite is likely ideal for the creative, artsy-type homeowner who can see the potential of an undefined space through her vintage cat-eye glasses (not to stereotype, or anything). But perspective is key — there is no clear bedroom, living area, den, and/or dining area, providing a framework that either offers endless opportunity, or else, the added burden and expense of tacky room dividers. But chances are if you're looking to buy here, you've thought beyond a pseudo-wood IKEA divider.

Chances are, too, if you're looking to buy here, you seek not the company of 500 new neighbours — you recluse, you. But it is nice to see a diversion from the 50-floor mega-structures that seem to be spawning with increased voracity from Toronto's downtown. While you're certainly not off the beaten path with a spot right where King meets Queen, you might actually get to know your neighbours by sharing a building with just nine other suites.

Next: parking and locker included? Is this too good to be true? Maybe, but that's what Streetcar's reps tell me. While starting costs for some projects are often deceptively low, here you won't have to tack on an extra $30k (if you're lucky) for parking. Paying in the low-400's for parking, locker, and more than 800-square-feet really isn't half bad. The location is also superb with easy access to the DVP and new West Don Lands development, and as I've hypothesized before, I suspect Corktown is on the up (meaning fewer dive bars and more espresso bars, though this is not a good thing for the hipster-averse). 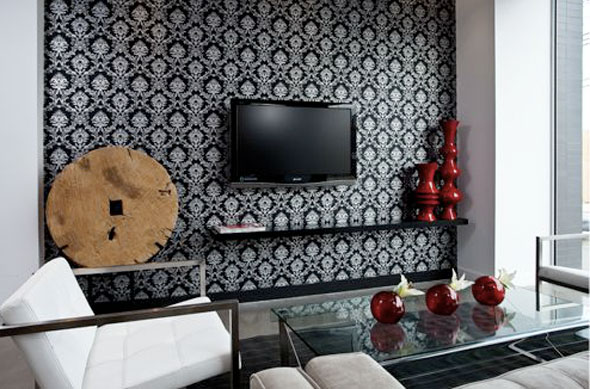 Oh, Streetcar. I've long known of your less-than-pleasant reputation with customers, and alas, you've confirmed. Not that my experience with Streetcar has been particularly bad, but I've found its representatives to be somewhat pithy — almost short. Granted, I'm sure I've oozed the putrid scent of a looky-loo (or worse — a writer), but I would've expected at least a little more affability. Others have noticed too. While it wouldn't necessarily deter me from purchasing a unit in the future, it would make me somewhat wary, especially considering the bumps and bruises that usually arise during the settling-in stage.

Speaking of getting along with others (how's that for a transition?), you're going to have to hone those skills if you take up at Lofthouses. While residents might enjoy the pleasure of few immediate neighbours, they're going to have to share their lounge amenities with fellow Corktown District dwellers. So, basically, strangers popping in and out of their building to entertain friends and play in their communal kitchen. Think of it as your roommate's annoying "bro" boyfriend, equipped with an extra key. Terrible. Though I suppose it's not much different if you live in a mega structure and meet common residents in the pool — except that you don't expect intimacy when you live in a 500-unit building. You might in a building with just 10. 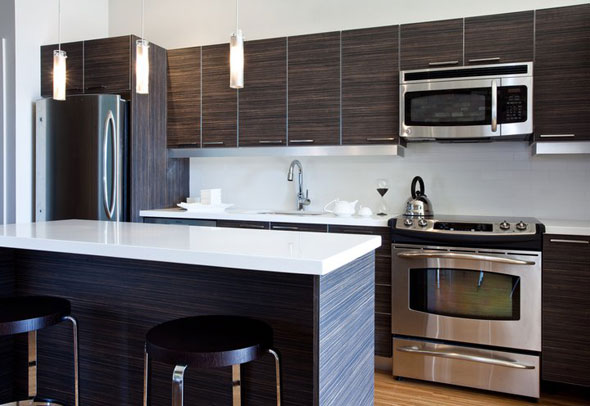 Good sizes, fair prices, and a super location that will see added innovation in the next few years. Just pray that you don't encounter any troubles that require you to contact the developer after moving in, and/or that your lounge-loving, Corktown District neighbours have full-time jobs and won't take up occupancy in the communal kitchen late at night.