A Scandinavian guide to Toronto

Toronto is a city that boasts about its multiculturalism. You can find anything and anyone here from any corner of the globe. But it seems that the entire Scandinavian and Nordic region has been ignoring Toronto, and I'm not talking about H&M and IKEA.

So, what's a Scandophile like me to do without booking a flight to the cold, reserved cities of Copenhagen, Oslo and Stockholm? With some digging, it is actually possible to find Scandinavian goods here in Toronto. Hopefully this list will tide you over until your next (or first) visit to the land of welfare, winter and wienerbrød.

Note: While Finland is technically "Nordic" and not "Scandinavian," it's still included in this guide. 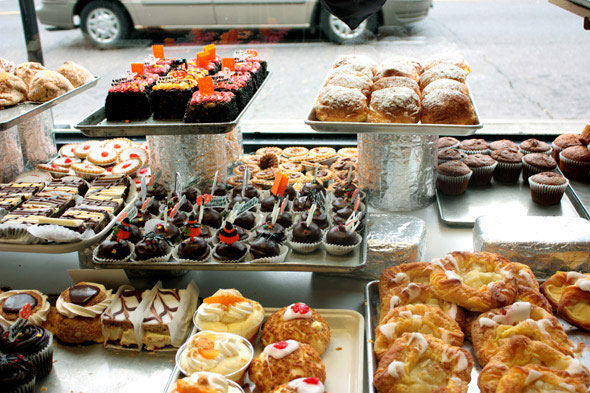 The Danish Pastry House (366 Revus Avenue, Port Credit, Mississauga)
The Danish Pastry House is the holy grail of Danish pastries in the GTA and possibly beyond. Hidden in an industrial plaza at the end of a residential road in Port Credit, the classic marzipan-lined spandauer and cinnamon rolls here compete with some of Copenhagen's best native bakeries. The 10-month old bakery is only open to the public Saturday 11am to 1pm, and Sunday 12pm to 2pm, while the rest of the week is wholesale. 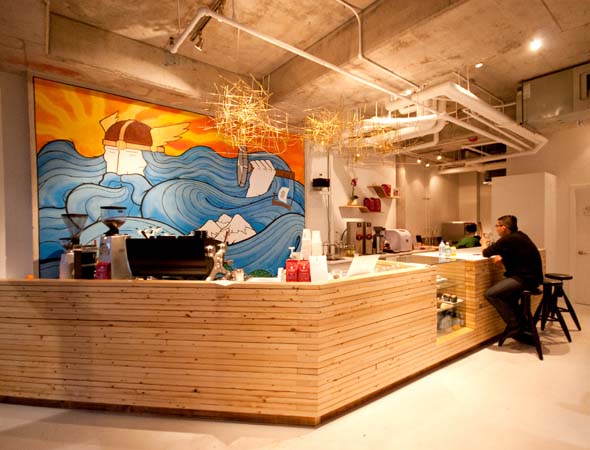 THOR Espresso Bar (35 Bathurst Street)
While there is nothing remotely Norse about Thor's servings, their menu gets points for mentioning Mjölnir, or Thor's Hammer. The in-house Mjölnir espresso is almost as intense as a red-eye or a Red Bull (pick your poison). If you can't handle the intensity, Thor has a plethora of great espresso-based drinks. But the best part about this place is the atmosphere - the vibrant Viking mural lights up the room beautifully.

IKEA (various locations)
There are actually zero places to get a proper Scandinavian meal in Toronto, aside from IKEA where you can find sumptuous meatballs, salmon, open-face sandwiches and marzipan cakes. The legacy of Scandinavian food in Toronto has been short-lived; meanwhile, Copenhagen has been having a culinary renaissance for the past few years with celebrated restaurants like Noma. Plainly put, Toronto needs a real taste of Scandinavia. 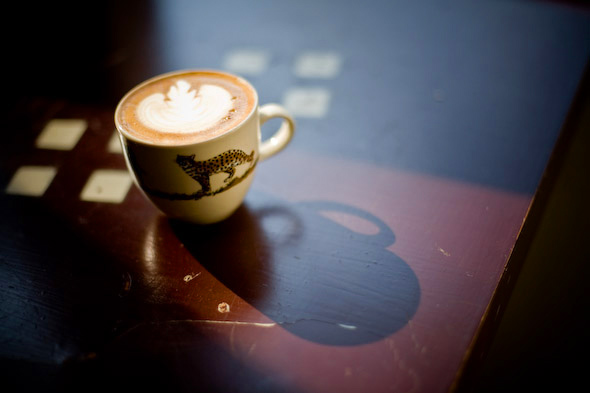 Fanny Chadwick's (268 Howland Avenue)
For a morning treat, Fanny Chadwick's offers traditional Finnish pancakes and smoked fish as part of their brunch menu. The rest of the menu might not read Scandinavian but I don't hear anyone complaining. (Note: Holy Oak Cafe also used to serve Finish pancakes but they no longer offer it.)

Viking Foods (31 Railside Road, Unit 5)
This Finnish-Canadian owned shop in industrial Don Mills has been in business for over 56 years, stocked with Swedish crisp breads, jams, tubed caviar, mandatory licorice, and chocolates from Finnish brands like Karl Fazer and Dumle. This is the only place I've seen Swedish cream cheese, but unfortunately, I have yet to see imports of lascivious Danish butter.

Beaches Bake Shop (900 Kingston Road)
Toronto's "only Swedish cafe" serves fresh soups, quiches and salads that are not particularly Scandinavian. However, what is Scandinavian here are the divine servings of Sarah Bernard chocolate meringue cakes and marzipan-based Dammsugare and Princess Cakes. The cafe is a hub of activity with cooking classes and an annual Swedish Cinnamon Bun Day in early October. Find Kalles Kaviar, saft (syrup) and packages of rose-hip soup, nyponsoppa, on the pantry without having to trek to IKEA.

Change (315 Queen Street West)
Toronto is one of the few locations in North America where you can find Change lingerie from Denmark. Change is good, so don't feel stuck at La Senza or La Vie en Rose. Whether essential or luxurious, Change offers an affordable range of bra sizes from A to J and bra-fitting services to boot. 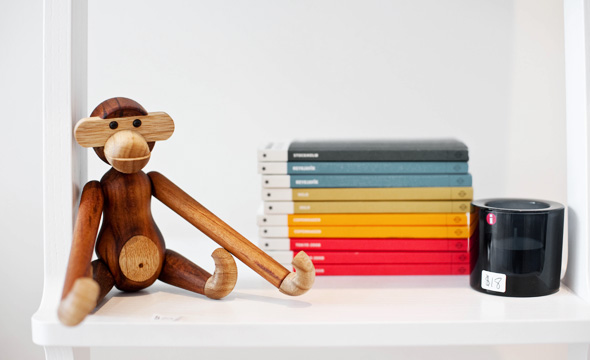 Mjölk (2959 Dundas Street West, at Keele)
Mjölk ("milk" in Swedish) is the Scandophile's design dream come true. Clean and minimalist, the store carries furniture, housewares and harmonious accessories from Swedish and Japanese designers. Increasingly, the owners are carrying brands America and Canada that fit their aesthetic such as Hoi Bo. While you're on Dundas, check out Everyday Housewife (1066 Dundas Street West) for Bev Hisey's collection of vintage Scandinavian glass.

The Finnish Place (7670 Yonge Street, Thornhill)
It's no doubt that Finland has mastered bright and coloruful interior décor. Since 1971, the Finnish Place has been carrying hoards of beautiful things from brands like Iitala and Marimekko in Thornhill. With iconic ceramics, textiles, gifts and Moomin accessories (though they could use more), the shop also offers affordable Finnish snacks and shampoos. This place is definitely wedding-registry worthy. 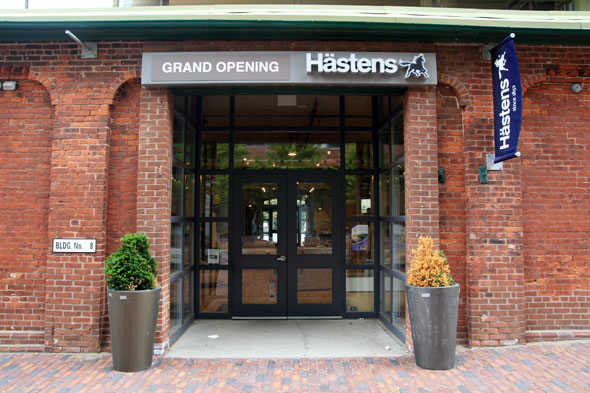 Hästens (18 Distillery Lane)
Feel like spending five figures on a luxury Swedish mattress? Then Hästens is for you! The family-owned business from Koping, Sweden, has been serving the royal family of Sweden since 1852 with its all-natural beds. Hand-made from horsehair, flax, cotton, down, pine, wool and Swedish steel, Hästens is instantly recognizable with its large blue-checked gingham textiles and linens. While in the Distillery District, also check out Bergo, known to carry Arne Jacobsen, Georg Jensen, Henning Koppel, Alvar Aalto and Design House Stockholm.

TORP (345 Wellesley Street East)
TORP represents Danish and Scandinavian design companies and carries the unforgettable space-age silverware of Georg Jensen, which is sure to convert you to mid-century modern Danishness forever. TORP preaches quality from renowned game-changing designers such as PP Mobler, Muuto and Askman. This is where you go to for Danish Design 101. 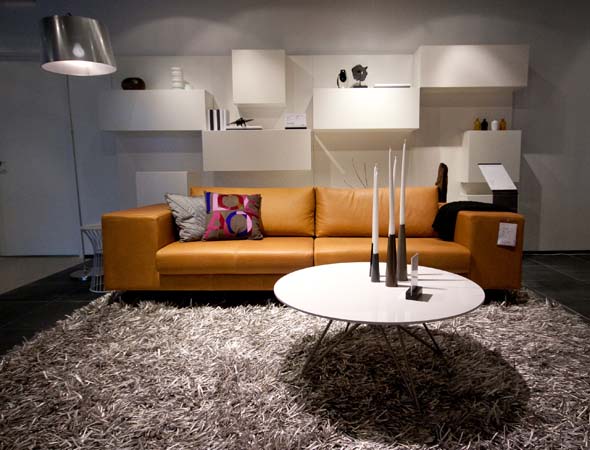 BoConcept (230 Adelaide Street East)
BoConcept is an international brand that started in the tiny town of Herning, Denmark in the 1950s. Now it is Denmark's most global retail furniture chain, specializing in basic home goods as well as custom designs. At its Toronto location, you can find work from Anders Nørgaard and Morten Georgsen, just to name a few, and plenty of Danish-inspired designs.

Scan Décor (1200 Kennedy Road)
Scan Décor in Scarborough is the place you go to die happy on the legendary Norwegian Ekornes-Stressless recliner. While the store carries some wooden teak furniture, they mostly specialize in splurge-worthy couches, sofas, and armchairs. In the mood for more teak? The Teak Gallery (2623 Eglington Avenue East) sells the largest selection of Scandinavian furniture in the GTA, and GUFF (1142 Queen Street East) and Machine Age Modern (1000 Queen Street East) are known for carrying Danish and Norwegian vintage teak furniture.

Russet & Empire (390 Keele Street)
Recognized for its vintage Canadian memorabilia, Russet & Empire loves a culture that embraces the winter. That's why in the last two years, the owners have been traveling to Sweden on buying trips, drawing parallels between Swedish and Canadian culture. This Junction store has the potential to become an adorable house of mid-century Swedish design and attract aficionados from all over the city.

Harbourfront Swedish Christmas Festival, end of November
Swedes love their Christmas celebrations. At the Christmas Festival you can find ornaments, Swedish books, and rows upon rows of tubed salmon, jarred herring, elderflower jam, and an assortment of crackers and mustards. Drink the glogg, a spiced mulled wine from Northern Europe. This is as Nordic as Toronto gets, so don't miss out.

Steve Gravestock's programming, Toronto International Film Festival
Want to know about Scandinavian film in the city? Steve Gravestock has built his reputation in Nordic film programming during TIFF. This year, Steve has scheduled loads of Norwegian films at this year's festival (90 Minutes, Kon-Tiki, All that Matters is Past). Also check out Danish films (The Hunt, A Hijacking), Icelandic film The Deep, Finnish film Road North, and Swedish film Blondie in September. More films TBA.