A brief history of Garrison Creek, lost but not forgotten

Though it could never compete with the Don, Humber or Rouge in terms of size, little Garrison Creek left its mark on the land that became Toronto for thousands of years before its unceremonious demise. Mixed with sewage, channelled underground and permanently covered, Garrison Creek is now almost invisible save for a few cairns, the faint sound of flowing water, and some City of Toronto markers around its former path.

Today, a few remaining natural deviations in the land, mysteriously winding streets and buried bridges line the creek's old route from just north of St. Clair Avenue to its former outlet into Lake Ontario near Fort York. In 2010, our own Derek Flack photographed the Garrison Creek Discovery Walk - a blazed trail that follows the original creek's path. The article is a great way to follow the creek without leaving your chair if you like your history visual. 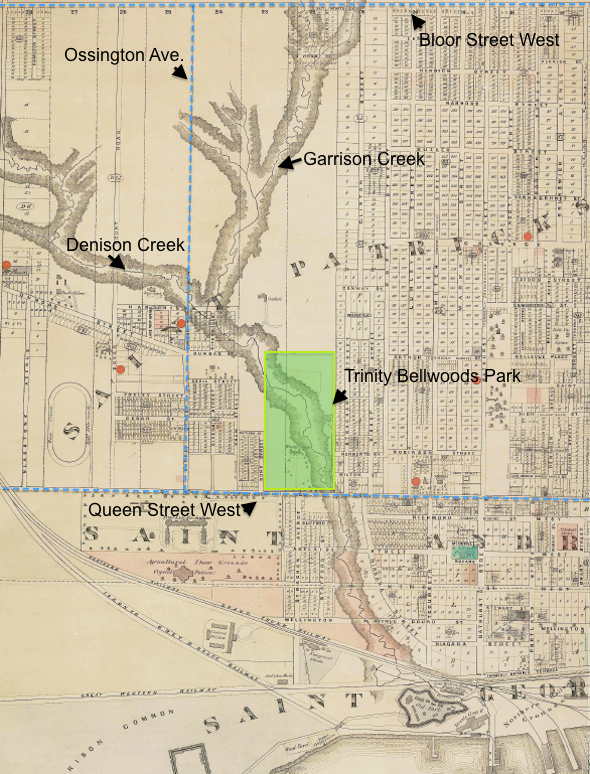 According to Lost River Walks, an excellent resource for Toronto river information, the foundation for the creek and other rivers in this area was laid roughly 12,000 years ago with the northward retreat of the Wisconsinan glaciation that left behind vast barren landscapes of sand, clay and gravel. As the ice left the St. Lawrence Valley, Lake Iroquois - the original, larger Lake Ontario - gradually reduced in size to the its current proportions. The escarpment at Davenport Road was once the shoreline of the old lake where the early creek would have had its mouth.

The lack of trees and other plant life to bind the soil together in the wake of the retreating glacier meant many early rivers like Garrison Creek were able to quickly form deep ravines and depressions in the land.

As early maps of York and the surrounding area show, modern Garrison Creek rose as two separate streams (the other is Springmount Stream) north of St. Clair that met just north of Davenport Road, to use today's landmarks. From there, Garrison flowed through Christie Pits park to its convergance with London Stream at Bickford Park where part of the old river valley is still noticeable. The concrete wall on the north side of Harbord where it cuts through the park was once the parapet of a now-buried bridge over Garrison Creek, as shown below. 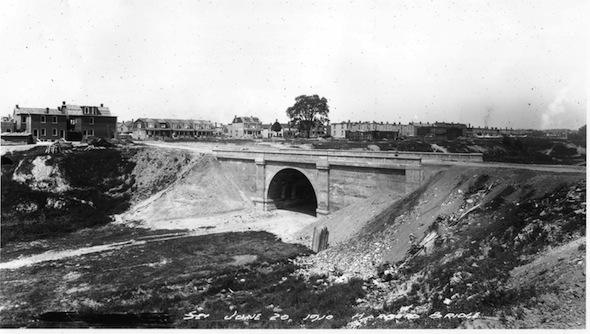 From Harbord the creek meandered south-west, necessitating the curved sections of Crawford and Montrose Streets where it met Dewson Stream, another minor flow of water. Continuing south-west, Garrison flowed through Fred Hamilton Park to a point just east of Ossington where it met Denison Creek at the intersection of Roxton Road and Harrison Avenue. Denison was roughly the same size as Garrison Creek and is responsible for the broad dip in Ossington Avenue at Churchill Avenue and several windy streets and rumples in the land to the west.

From this last major confluence, Garrison changed direction and headed south-east into Trinity Bellwoods Park where it carved out a broad, shallow ravine popular for sledding in the winter. A bridge across the river at Crawford Street was built by R. C. Harris, the former Commissioner of Public Works who lent his name to the R. C. Harris Water Treatment Plant in the Beaches. Like the Harbord bridge, it too was buried where it stood when the ravine was filled in. 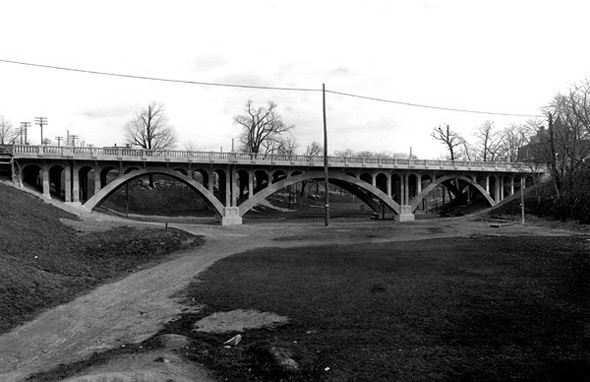 Garrison left Trinity Bellwoods Park at its south-east corner and crossed Queen Street leaving behind a noticeable depression. The curve of Niagara Street mirrors the direction of the creek as it wound toward Fort York and splashed into Lake Ontario roughly where Bathurst Street passes under the Gardiner Expressway.

The creek's use as an open sewer for many of the properties along its path and the associated health concerns of festering piles of garbage lining its banks led the city to bury the creek in a brick sewer for its entire length (for more, see Michael Cook's detailed article on Vanishing Point). Much of what could constitute Garrison Creek today is a mix of sewage and rainwater run-off during periods of wet weather. Plans to revitalise the river and open it up once more have been floated in the past, but any viable scheme would have to deal with the *actual* floaters now mixed in with the creek water. Watch this space? 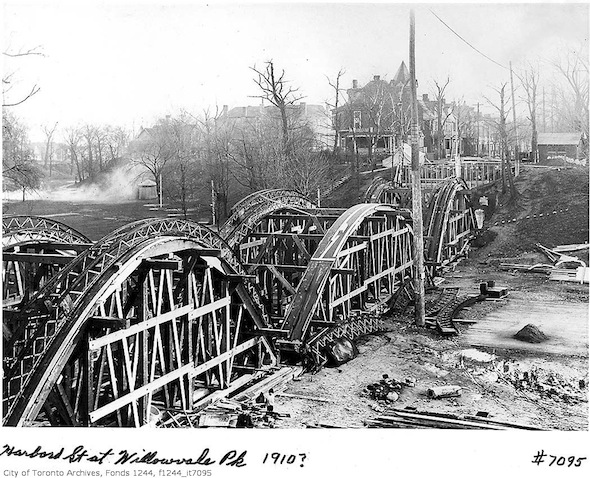 The Crawford Street bridge under construction and a view down the Trinity Bellwoods ravine. 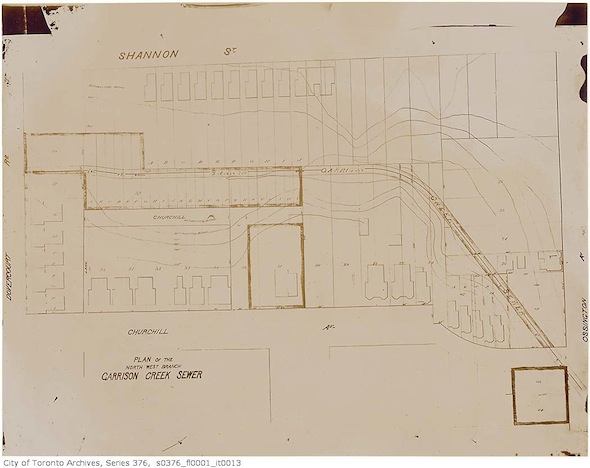 Map of the Denison branch of the Garrison sewer near Churchill and Ossington. 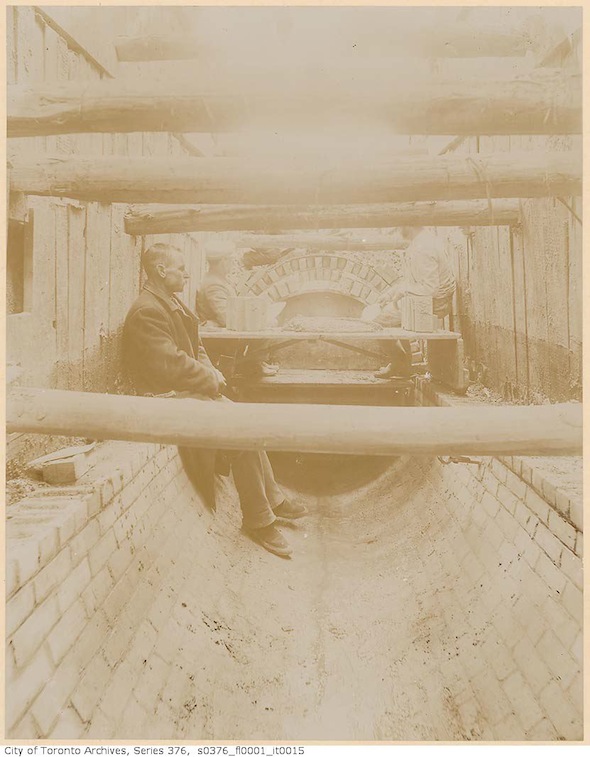 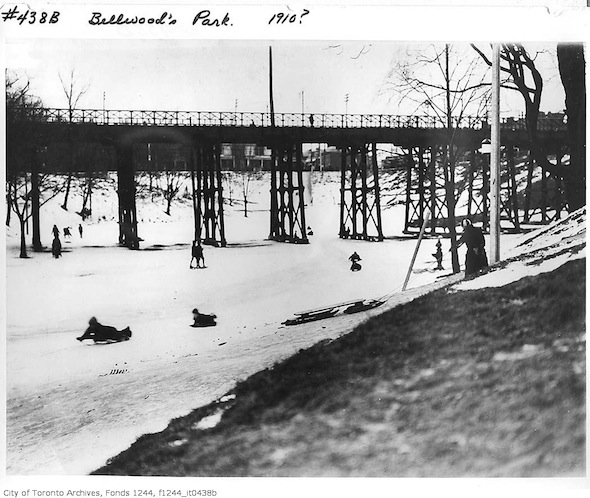 All pictures from the Toronto Archives. Annotated map part of "Wadsworth & Unwin's Map of the City of Toronto, 1812."