Listening in on the Toronto Sound Map

The sound of the street — the swish of passing cars, the rumble of the subway and the chatter of strangers — is something as city dwellers we all experience on a daily basis, whether we choose to or not. It's surprising then that we pay such scant attention to how everyday noise impacts our mood and, in the long run, overall health and stress levels.

In the hope of changing that, the staff at the Science of Music, Auditory Research and Technology Laboratory, or the SMART Lab, at Ryerson University has made hundreds of field recordings at locations around the city and arranged them in an interactive Google map through which users can aurally explore the city

Frank Russo, the leader of the project, hopes to generate dialogue between Toronto's city planners, architects and public on how different types of sound effect our quality of life and health.

"Broadly speaking, we want to know how [sound] affects our psychology", says Russo. "The soundscape is kind of neglected but it does have a real effect on our daily living. I think about the grinding of the subway and the tens of thousands of people that effects every morning."

Each two minutes long, the audio excerpts were recorded binaurally — a technique that mimics natural human hearing — at points around the centre of the city and sporadically in The Beach and Bloor West Village.

Back at the SMART lab, Russo's team uses the recordings to gauge people's reactions to everyday noises. Participants hear the street at a natural volume through headphones and their emotional response is measured in a survey. 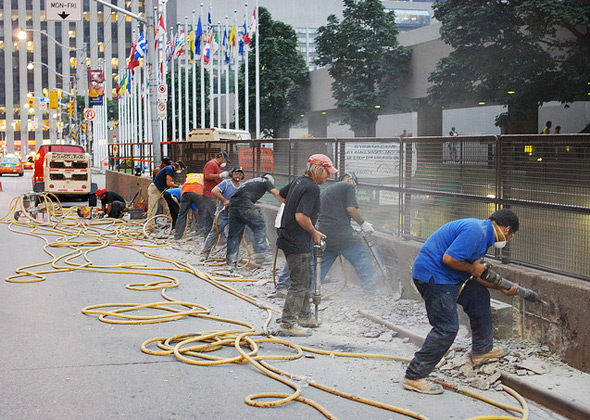 Russo avoids naming specific areas of the city that suffer from a poor soundscape - you'll have to make up your own mind from the sound map - but the most frustrating sounds are often the ones with irregular, jarring aspects that change over time - a construction site, for example. The constant drone of an air conditioner is felt to be less disruptive.

"We have a very unidimensional way of understanding [sound] in terms of the law and city planning — "how loud is it and when did it happen...? More parks, water features and natural sound barriers are all positive steps."

The Toronto Sound Map project is open to the public and the SMART Lab encourages people to add their own recordings to the site.