Since the first tent was erected 18 days ago, the biggest threat to the people at St. James Park hasn't been the police, and it hasn't been the mayor's office â it's been the weather.

Mid-October isn't exactly prime camping weather and with each passing day, winter gets a little bit closer and the temperature slowly drops (with some exceptions). The first signs that the movement had a plan for weather on the horizon arrived late last week in the form of three Mongolian yurts â basically heavy duty, insulated, portable shelters â which were a gift from some local unions. The yurts are being used to house medical facilities, as well as the free school, library and post office.

Obviously, this is a good start and will certainly help as the temperature drops, but the real challenge will be how to keep the 250+ semi-permanent residents from freezing to death in their tents, something that Mischa Saunders has been thinking about a lot these days. Saunders is a member of the Winterization Committee at the camp, a team tasked with finding answers to very basic questions like "how does one survive a Canadian winter without permanent shelter?" 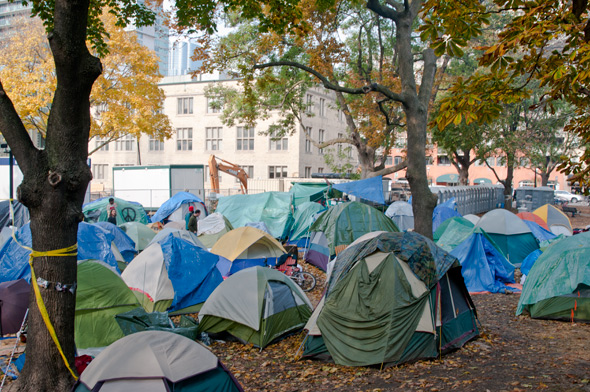 As it turns out, he's got some pretty convincing solutions to the problem, which start with insulation.

"Basically we want to get the tents off the ground," he said. "That, ideally, means getting them up on skids, but could also mean putting cardboard under the tents. Blankets as well, are very important."

Saunders also stresses diet as a way to combat the cold. Eating thermogenic foods (foods that increase the metabolism) helps to bring up the core temperature as does the consumption of calories in general (so lots of small meals spread out across the day is recommended). Cold showers might seem counter productive at first, but they push blood towards the organs and away from the surface of the skin while helping to acclimatize the body for cool temperatures.

There's a poster, hanging in the information booth close to the northwest corner of camp with a list of individual recommendations, from how to dress warmly (layers!) to tips on food, shelter, physiology and identifying the warning signs of hypothermia. Educating people is the first step in building a winter-ready camp. 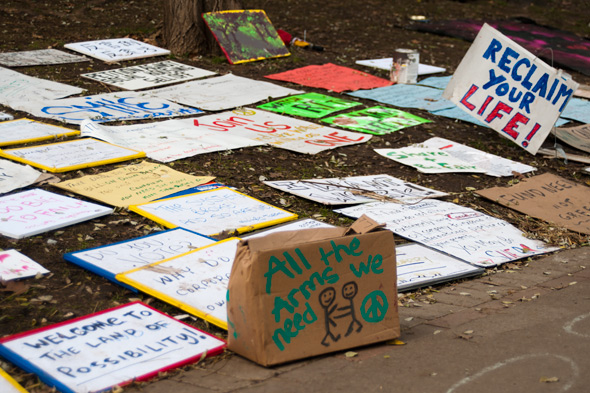 The next step, according to Michael Vessey, the camp's head of logistics, is to ensure everyone is part of a community.

"What we really don't want here is isolated people in tents, because that is a huge risk. So I encourage people to meet their neighbours, get to know them and if you don't like your neighbours then move. Once you've found your little crew, you watch out for each other," he said.

Vessey would like to see people take care of themselves, and one and other as autonomously as possible and let logistics fill in the cracks.

There are still plans to build more structures as well; for dining, meditation and perhaps even to hold the general assembly. But he doesn't want to put all of the camp's resources into any one idea, but rather, he'd prefer to experiment with a few different strategies in order to figure out what works best for everyone involved.

It will be an arduous process for sure, but few thought they'd make it this far. At this point, Vessey and Saunders don't even pause when asked about whether they'll stick it out for the winter. That they will remain in the park appears to be as inevitable as winter itself.