Occupy Toronto gets ready for the big show (but how big will it really be?)

A General Assembly and info session was held last night for the Occupy Toronto action, which is set to begin Saturday morning in the Financial District. Although the specific route that marchers will take prior to their act of occupation is yet to be revealed, participants have been instructed to gather at King and Bay streets at 10:00 a.m. tomorrow morning. There were about a couple hundred people in attendance last night — not including media folk — which probably doesn't help that much in estimating just what type of overall attendance the Toronto movement will have — though one would expect that a significant chunk of those who showed up last night will be doing the camp out thing once OccupyTO gets underway. 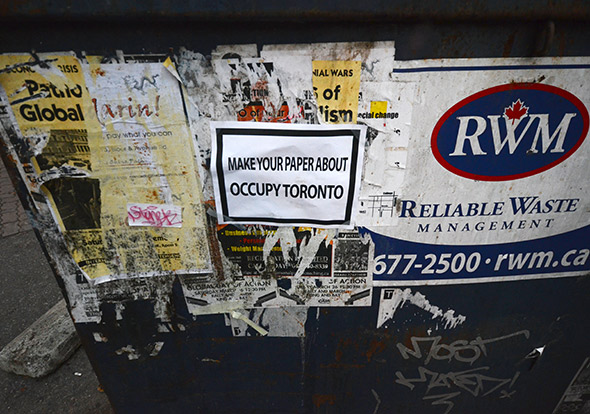 There was a heavy media presence while a catechism like call and response took place between the organizers and the crowd (as was seen at Berzcy Park last week). The police, on the other hand, maintained a low profile at the perimeter of the parkette beside OISE where the proceedings took place. Despite the occupiers explicit claims that they plan to protest via solely non-violent means, with the G20 still fresh enough in most people's minds there remains at least a little anxiety that conflict will break out between police and protestors. 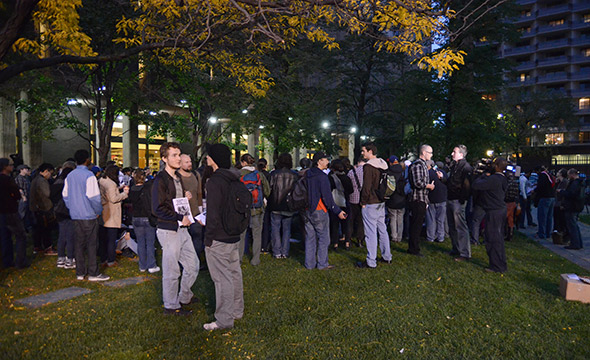 A subject of even more curiosity, though, is just how much momentum the movement will get here in Canada, where the banking system is more regulated and the economy stronger than the States. Although critics of the local movement continually cite its apparent lack of a specific focus, the belief that contemporary capitalism has run amok and the economics of the 99% to 1% distribution of wealth aren't tied to any one country, and may prove rallying points enough for local protestors.

Tune in tomorrow to find out.

Writing and photos by Scott Snider with contributions from Derek Flack