10 key moments from year one of Rob Ford's mayoralty

While he didn't officially take over until December 1st, it was one year ago today that Rob Ford dashed the dreams of the downtown elite and became the 64th Mayor of Toronto. With a populist platform and the promise that he'd trim spending at city hall with "no services cuts — guaranteed," Ford swept the horseshoe surrounding the old City of Toronto in taking the mayoralty.

Well, the previous year has been nothing if not exciting. In that time, he has racked up a whole career worth of sound bites, newsworthy headlines and political gaffs. To celebrate (or at least note) this anniversary, here's a look back at the 10 defining moments from Ford's first year as mayor.

10. His first interview with the CBC
Just one day after his big win, then mayor-elect agreed to appear on CBC Radio One's As It Happens. And consistent with his reputation as a councillor, controversy wasn't far away. What should have been a simple and straightforward interview with the mayor-to-be turned into a fiasco when a distracted and disingenuous Ford continuously interrupted the phone interview to yell at players he was coaching at the time. Ford enthusiasts blamed the CBC, claiming the mayor was caught off guard and that the radio station intentionally tried to make him look stupid, while naysayers claim Mr. Ford is perfectly capable of making himself look stupid all by his lonesome. Listen to the interview here. 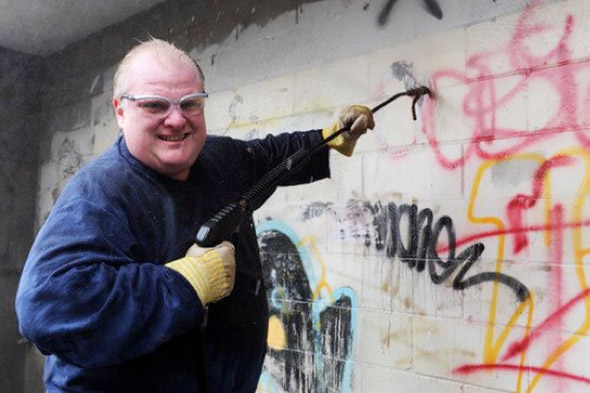 9. The Graffiti Crackdown
Beginning in February of this year Ford made good on one of his campaign promises when the City of Toronto initiated a large-scale crackdown on grafitti. No wall was safe, not even at the Brick Works. Fortunately (or unfortunately, depending on your perspective) this only inspired street artists to retaliate and has subsequently led to a new star subject for them &mdash: the mayor himself. A stroll down Graffiti Alley these days shows multiple examples of our round, chuckling municipal leader.

8. Three controversies, one meeting
During the run up to the election, Rob Ford was continuously dismissed because he couldn't build consensus at council. Even if he did win the election, the thought was that he'd be a lame duck because he was incredibly unpopular even among the right-leaning members. Ford proved everyone wrong during his first council meeting when he pushed through three fairly high profile, if largely symbolic, initiatives. In one fell swoop the mayor proved himself more bull than duck and had the TTC declared an essential service, reduced council office expense budgets from $50,455 to $30,000 and killed the vehicle registration tax. This is what's known as the honeymoon period. 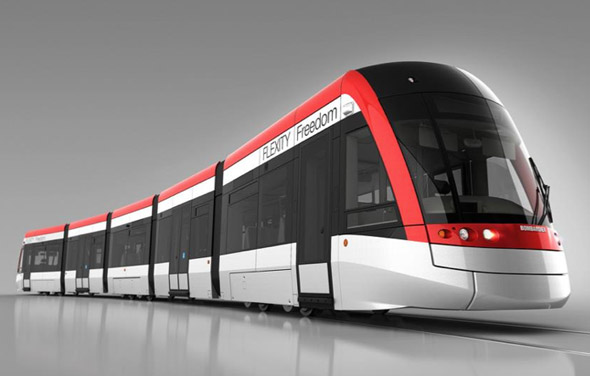 7. Rob kills Transit City?
On December 1, his first day in office, newly minted Mayor Ford unequivicolly pronounced Transit City dead. Now, Rob Ford doesn't have the sole authority to make such declarations, but he can (and did) make it quite difficult to proceed with such a wide-ranging Toronto-based transportation project. He also promised a subway, but no one's holding their breath for that.

6. The Provincial Election
Early into his mayoralty, perhaps when he was feeling more confident about his approval rating, Rob Ford threatened to sic "Ford Nation" on Dalton McGuinty in the upcoming provincial election should the Premier get in the way of his dream of destroying Transit City once and for all. It turns out though that Ford underestimated his ability to make people dislike him and by the time the election did come around, so-called Ford Nation proved mostly to be a figment of Rob's imagination. As of mid September, his approval rating had dropped to 42 per cent and Dalton McGuinty was openly using Mayor Ford's name as a cautionary tale of what could happen if Ontario residents voted PC. Eventually the Liberals were re-elected, albeit to a minority government. 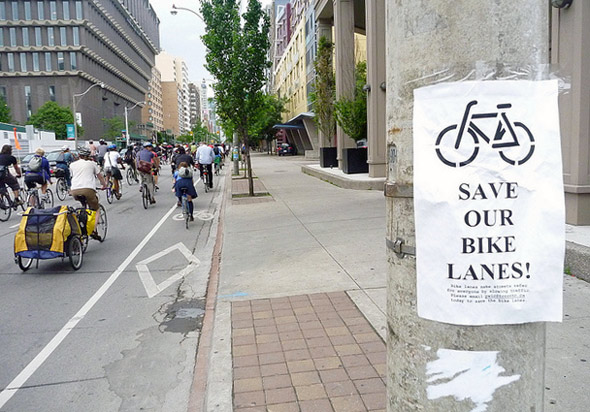 5. The Jarvis Bike Lane
Just one year after they were installed, council voted to remove the Jarvis Street bike lanes at a cost of $200,000 (they cost $59,000 to create). Despite evidence to suggest that the creation of the lanes had minimal impact on traffic and contributed to an exponential growth in bike traffic, Mayor Ford's unwavering commitment to petroleum fueled methods of transportation led council to kill the lanes. In the process, Toronto has likely become the only apparently world class city to report a reduction in the size of its bicycle network for 2011.

4. The Fort York Bridge
Originally a project dreamed up, designed, earmarked and green lit under David Miller, the death of the Fort York Bridge particularly stung the city-building sect. The money was already put aside to build a bridge that would connect the communities north and south of the Fort when seemingly out of nowhere a motion was put forward to kill the project with the claim that the city just couldn't afford it. By this time the media was quite used to these kind of shenanigans and those left of centre flipped out over the putative bad decision-making. As a sublimely sweet piece of serendipity though, the bridge won a posthumous urban design award — too bad we'll never see it.

3. Epic deputation meetings
After failing to find his precious gravy, Mayor Ford hired the consulting agency KPMG with the hopes that they would have a better nose for the sweet nectar than himself. The result was a core service review that left nearly everybody unhappy. The citizens were reaching their breaking point and that came out at a July 28th executive committee meeting where 344 citizens signed up to speak to the proposed cuts.

Mayor Ford was criticized for refusing to break the meeting up into more reasonable segments over a number of days, instead opting for one marathon session. In the end, the meeting lasted over 20 hours with the Ford claiming it as his "proudest moment." 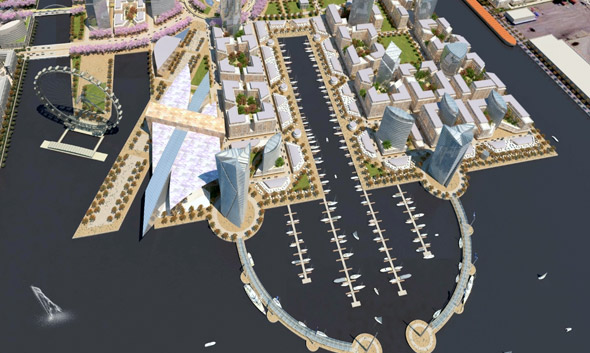 2. Port Lands fiasco
It's hard to determine what Rob and Doug Ford expected the public reaction to be when they unveiled their re-imagined plans for the Toronto waterfront. With its monorail, giant Ferris wheel and mega-mall, it kind of sounded like a plan out of the 1939 World's Fair, and one that I don't think anyone really took seriously. People very quickly saw through the flashy renderings for what the plan really was, a power grab to transfer control of the waterfront from Waterfront Toronto to The Toronto Port Lands Co. Anyway, the backlash was fast and furious and ultimately ended when the Brothers Ford abandoned the idea altogether — a huge victory rational thought and responsible planning.

1. Pride
Ever since the days of Barbara Hall, every mayor has marched in the pride parade. Ok, that's only three mayors, but still, we're talking 20 years of marching. Mel Lastman did it, David Miller did it, and it was kind of expected that Rob Ford would do it. But, ever the maverick, Ford announced very early on that he had a previous family commitment soaking up some rays by the lake that weekend — and family comes first. This excuse sounded weak to most people, especially since there were a whole plethora of Pride events that he could attend should he not be in town for the parade itself. Plus, it would be a pretty painless exercise in building good will among a demographic that wasn't a big fan of him in the first place.

But Rob Ford stuck to his guns and the parade was cancelled. Just kidding, it was awesome and everyone had a great time.