In a sprawling 122-page report titled "Moving Transit Forward," (PDF) outgoing TTC Chair Adam Giambrone has offered a summary of his accomplishments in the position and a set of recommendations on how to improve TTC service in the future. There's even a YouTube guide to the document (embedded below) for those looking for the abridged version, though admittedly all the clip really does -- for $15,000 from his Davenport councillor's budget, no less -- is talk about how good a job Giambrone has done during his tenure and bemoan the lack of government funding the TTC faces.

That the video isn't more useful (like, say, Rob Ford's YouTube work!) is a shame, as I suspect that few people have the time and energy to wade through the detailed report, as interesting as it is. Making up for that, however, is the "Executive Summary," which offers a tidy rundown of the various recommendations.

Readers of the report will quickly determine that some of the these -- particularly those related to funding -- aren't so realistic given the the Commission's current fiscal situation. But, in a sort of preemptive strike, Giambrone contends that without government initiatives like "increasing the gas tax, sales tax or implementing road tolls to cover [TTC] costs...the only alternative is extensive cuts to TTC Service." 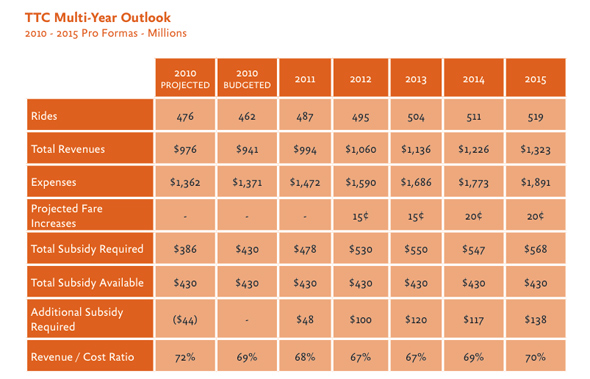 From an operations standpoint, the report is ambitious. It calls for improvements to route supervision via the hiring of 60 additional supervisors over the next three years, the implementation of transit signal priority at 1,000 intersections, an increase of bus-only traffic lanes, and the implementation of an all-door door entry and proof of payment policy on some of the busiest bus routes. 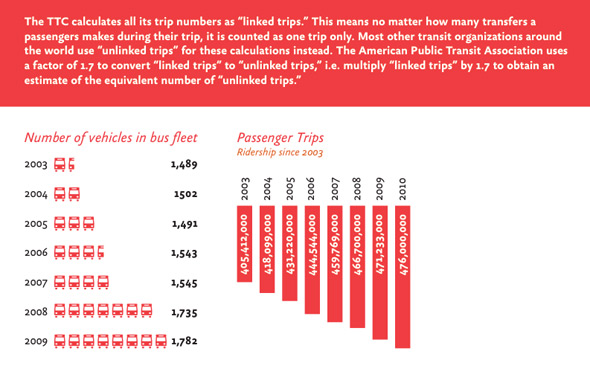 As far as service goes, in addition to implementation of the 78 recommendations of the TTC Customer Service Advisory Panel, Giambrone calls for the creation of an "Open Standards" electronic fare payment system (rather than Presto), expanding e-alerts and the "Next Vehicle Arrival" system, hiring a director of customer service, implementation of a cell phone network in stations and on trains, a review of route transfer policies with the possible introduction of distance-based fares and time-based transfers, the introduction of a low income Metropass, and the hiring of 150+ cleaning staff.

It all sounds fantastic on paper. And having a "road map" is never a bad thing. But, knowing what the TTC should or needs to do doesn't strike me as their biggest problem. Securing the funding to make service improvements actually happen is the major obstacle. To be fair, Giambrone does address this, but so many of the fiscal suggestions border on fantasy. Does anybody think, for instance that a 1% increase to the sales tax for the TTC would be entertained by the Ontario government?

The parts of the report that are more promising tend be those that focus on smaller improvements like signal priority, route supervision, and station cleanliness, to name a few. What do you think? Is this report just a set of unrealistic goals, or a meaningful document that will provide crucial guidance for the person who succeeds Giambrone.