When strolling through the older neighbourhoods of Toronto, it's inevitable that you'll notice prevalent elements of late Victorian architecture. These remnants of life in late nineteenth-century Toronto represent a style that is distinct in both its simplicity and grace.

The style is unique to Toronto. Patricia McHugh writes in Toronto Architecture: A City Guide that it's actually a combination of Italianate and Gothic Revival. Bay-and-gable houses were rarely built as detached, but were usually erected as double and row dwellings, and were very popular between 1875 and 1890. The oldest known example is the Struthers/Ross house in the Annex, located at 30 and 32 Lowther Avenue, erected in 1875. It is highly likely that other homes were directly inspired by David B. Dick's refined design.

On their exterior, these homes are characterized by polygonal bay windows and pointy gables, which were often decorated with bargeboards. The materials commonly used for their construction were wood or white and red brick. Most of the time, the front of the house contained the living and dining rooms, with the bedrooms located on the upper floor. Sometimes the back of the house was covered in "Insulbrick," a type of fake brick, since this part housed the kitchen, washing lines, and led to the outhouse and the stable.

Despite these common characteristics, there's a great variety of decorations that adorn them, both inside and outside. A well preserved or properly restored bay-and-gable home may have stained glass, tall ceilings (usually measuring ten to eleven feet), ornate plaster work (such as medallions on the ceiling), coal fireplaces, and even elaborate ginger breading. 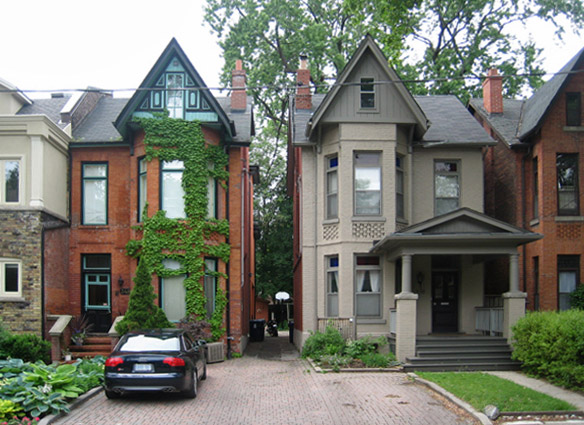 According to Scott Wei' in "Toronto's House Next Door," these residences aimed to imitate the much grander Gothic mansions of wealthy 1850s Victorians, albeit on a smaller scale. Their decorative but functional features shed light on the social conditions and everyday life in the last quarter of the nineteenth century in Toronto.

The city grew rapidly at that time, experiencing for the first time suburban development in such areas as the lower Annex, Cabbagetown, Don Vale, and Parkdale. The rapid expansion was, however, hindered by the limited forms of transportation (the options for moving building materials were quite restrictive, and included hauling what was needed for construction on your back or on a horse-drawn cart). As a result, the building lots were narrow, between 13 and 20 feet, and thus the dwellings that came to occupy them were skinny and tall, consisting of two and two and a half stories. At the same time, the houses extended well back into the lots, sometimes up to 150 feet. 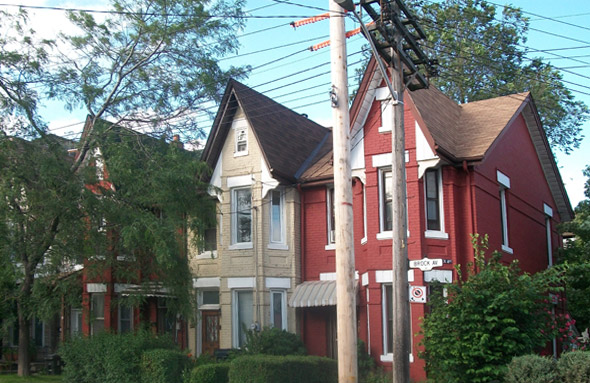 Even for the middle-class, everyday reality included being subjected to the scents produced by fireplaces, stables, and chamber pots, making access to air and light a dire necessity for one's own well being. The large bay windows were designed to let in as much air as possible, while the high ceilings were able to retain its presence within the house.

It's marvelous that so many varying examples of the bay-and-gable have survived to the present day throughout Toronto. While some of them are abandoned and deteriorating, and many have been dramatically altered, their simplicity and charm remain an iconic piece of Toronto architecture and history.

Photos from the Toronto Archives (series and fond information at bottom of image), Wikimedia Commons and the author.