The Toronto Railway Heritage Centre is having a coming out party this week. It was just less than a year ago that Mayor David Miller held an event announcing that work had begun in earnest to finish the last phase of the revitalization of the John St. Roundhouse - the part housing the Toronto Railway Heritage Centre. This morning he held another event celebrating the near-completion of that work, in advance of the rail museum opening its doors to the public as part of Doors Open Toronto this weekend, but just a day earlier, volunteers were still working around the clock to make things presentable.

Let's forget, for a moment, that a rail museum was always meant to be the principal tenant of a restored Roundhouse, but that the TRHC has been squeezed into just three bays of the complex, bookended between Steam Whistle Brewery and Leon's urban interiors outlet. You can take this as an object lesson in the brute realities of cultural partnership in a modern municipality, but right now, what's impressive is how quickly a staff of volunteers has transformed their part of the Roundhouse and the park facilities outside.

In advance of the grand opening, the jewels of the TRHC's collection - the CNR steam locomotive that used to sit on display at the CNE, a green and cream CN diesel engine - sit outside, while two train simulators are being reassembled inside the roundhouse, next to a Canadian Pacific sleeper car and the Cape Race, a luxury club car that ended its days doing excursions.

The sleeper is boarded up, but I see an open door at one end of the Cape Race and sneak inside. I doubt if it'll be open to the public this weekend - cave-like and musty, it's a bit of a wreck, and when I clamber up a metal ladder to the overhead gangway I see the roof is full of holes. A lot of money and work will be needed to open up the Cape Race to the public, but the old club chairs, the wood paneling and surviving fixtures inside, just waiting to be preserved, will give a priceless glimpse at what 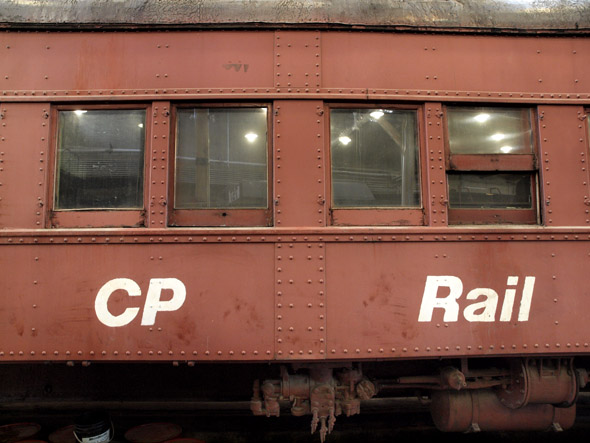 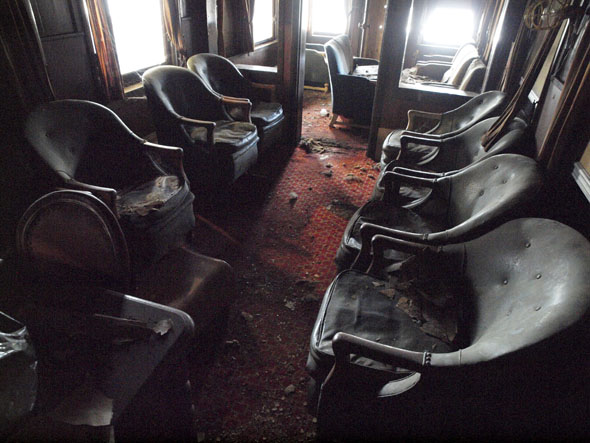 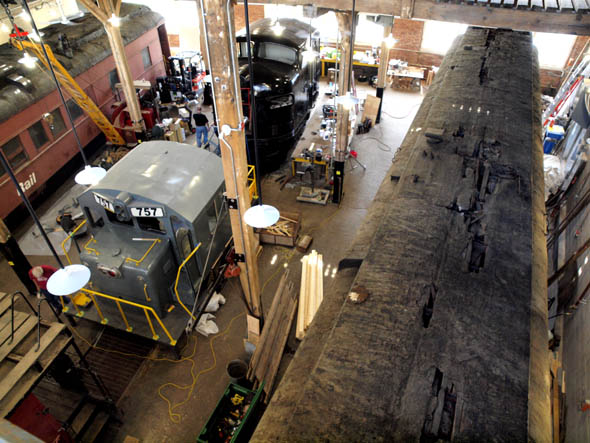 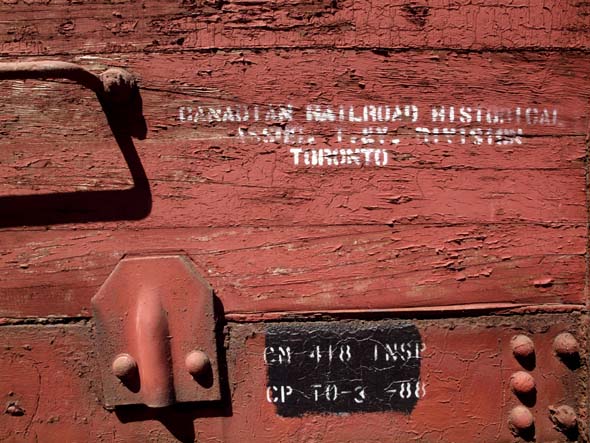 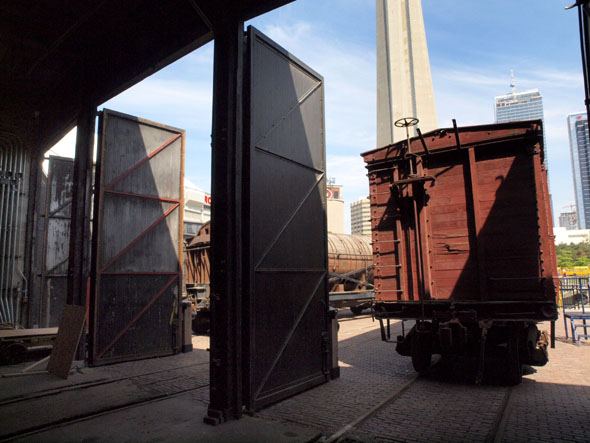 Outside, volunteers are swarming all over the outbuildings in the park - the old Don Station that spent years at Todmorden Mills after it was moved from its original location south of Queen St. East by the river is getting a new roof. "Gypsy Joe," a dreadlocked Irish Traveler and professional plasterer, proudly shows off the chestnut bench from the waiting room he's been stripping in the early summer heatwave, and the pair of cast-iron wood stoves that once heated the building; one was taken from a caboose, and the other, with "Station Agent" in bold relief on the top, was built especially for stations like this one. 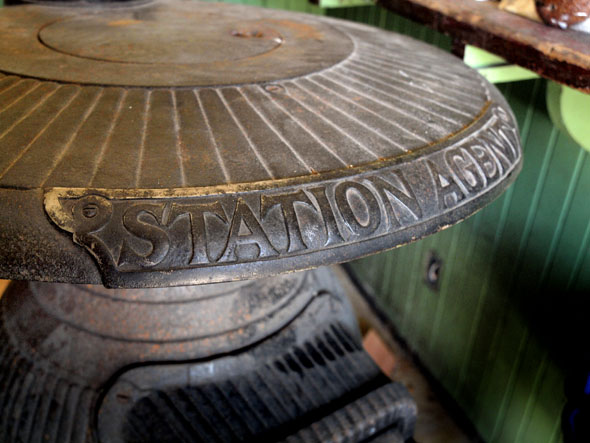 The project architect encourages me to take a look at Cabin D, the interlocking tower that once sat alongside the rail junction by the foot of Bathurst Street, and which workers have restored to its original Queen Anne detail and vivid paint scheme. New maple floors have just been put in and sanded, so we take off our shoes to look at the original Saxby & Farmer switching system around which Cabin D was built - the machine that made this unassuming building the steam era's equivalent of an air traffic control tower. 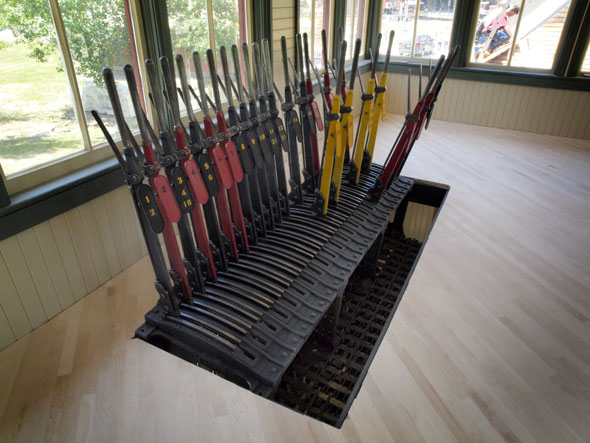 A miniature computer in cast iron, it was so heavy that it warped the oak pilings upon which it originally sat and slowly twisted the whole building out of true by several inches - a flaw that had to be repaired during rebuilding, and the whole mechanism now sits on a frame of steel i-beams. Like any computer, it needed occasional upgrades, which would be ordered from its London manufacturer and shipped across the Atlantic - a set of new iron wedges that would be inserted into the mechanism, which is the focus of the unadorned space inside Cabin D. 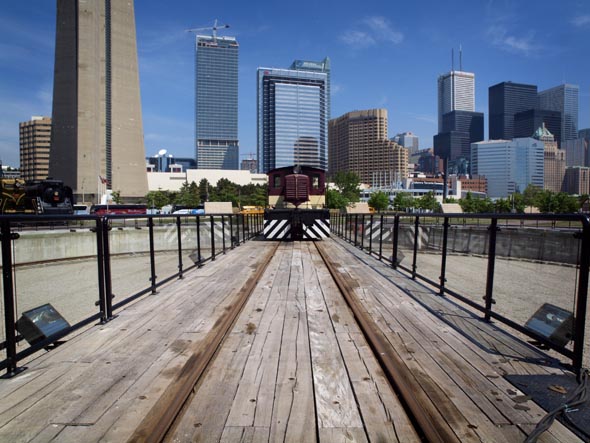 For engineering geeks, this might be the unheralded star of the show this weekend, to be scrutinized while the kids take their trip around the grounds on the TRHC's miniature steam train.