George Smitherman stops by 52 McCaul for a town hall, but keeps a lid on detailed policies

It was typical George Smitherman: rapid fire speech and really long sentences that make you go, what did he just say?

On the night before the first live CP24 debate (which he had to cancel due to "Daddy duty"), Smitherman spoke at a small town hall meeting at 52 McCaul organized by Che Kothari, the founder and executive director of Manifesto Festival.

The room was full of beer-sipping artists and young intellectuals. "I'm a 46 year old guy, and I wear suits. I probably don't seem all that hip and cool," Smitherman laughed.

He talked about everything, such as his work in the provincial government, community involvement, and passion for making Toronto a better city. He took questions later, mentioning his leadership skills in most of his answers. 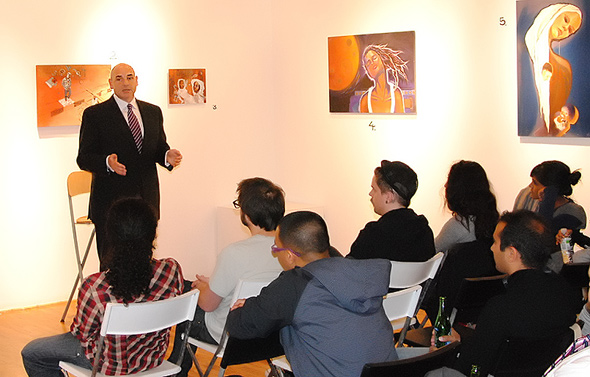 Smitherman has a talent for speaking, there's no question. He's almost never at a loss for words and can wax poetic about most subjects. But while his high-energy sentences often sound great, they can get hard to follow after awhile.

If you're listening to him without full attention, it's easy to feel like you've missed something important. The truth, however, is that what he's saying is often very vague.

He's avoiding getting into hot water before he needs to. So, right now, most of what he says is based on principals (e.g. consensus building, leadership, etc.) instead of substantive policy. The problem for me, as a voter, is that I don't have much of an idea of what he stands for.

Hopefully that'll change on May 28, the day Smitherman considers his "campaign launch." That's funny when you think about it, because it feels like this race has been going on for ages. 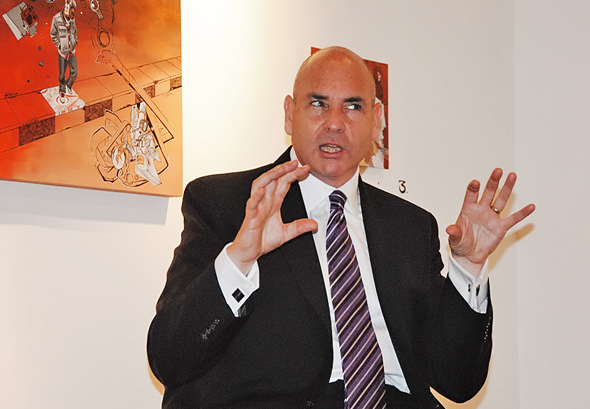 From the beginning of the campaign, it's been interesting to compare Smitherman to Rocco Rossi, who has offered ideas and detailed policies since his first major speeches. But Rob Ford, with his relatively straightforward message about waste and customer service, might be his true foil.

I suppose the downside for Rossi and Ford, however, is that they'll have fewer cards up their sleeves later in the race. Smitherman, on the other hand, is leaving himself a lot of room for surprise.

Despite the fact that this strategy annoys voters like me, it might very well make Smitherman the next mayor. Since when are campaigns about comprehensive discussions on issues anyway?

Here are a few quotations from him on Monday evening:

"Toronto is at the risk, at the moment, of having a bit of a right-wing pendulum swing." (Smitherman was referring to calls for privatization of city services).

"I'm hoping that Toronto, when we celebrate World Pride, can have a gay mayor."

"The Rob Ford candidacy is, I think, a threat to the values many of us feel a city ought to be able to project."

"You want to go see a museum, just go ride the subway." (I'm pretty sure Rossi was the first to use this joke).