How to deal with roadkill in Toronto

Roadkill happens. And on the mean streets of Toronto, sadly, it happens all too often. I came upon this poor squirrel lying in the middle of the road while riding my bike yesterday.

She had just been struck by a van, moments before I arrived on the scene. I thought she may still be alive, as there wasn't any blood or guts oozing anywhere. She was still warm to the touch, but I couldn't find a pulse. 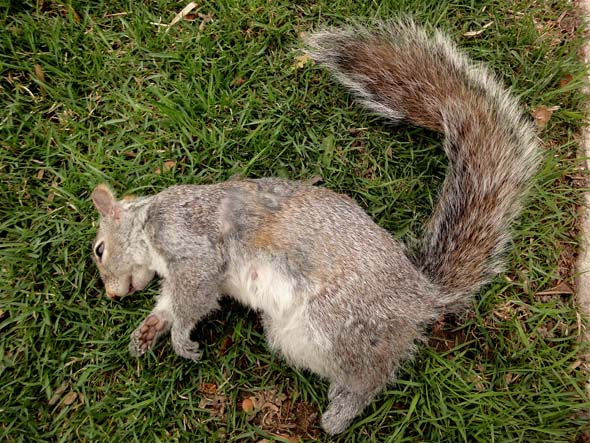 Being a lover of squirrels, I gently picked up her limp, furry body in one hand and gently placed her on a grassy spot on the other side of the sidewalk. I inspected her a little closer and it appeared like she was still nursing. I patted her gently, hoping that this turn of events didn't create orphans of her offspring.

I called the Toronto Wildlife Centre, but they had just closed for the day. Their answering machine message pointed me to Toronto Animal Services. They instructed me to put her in a bag and leave her on the porch, where they'll come to collect her the following morning.

Kevin, whom I spoke with at Toronto Animal Services, told me they get about a dozen calls a day for squirrels who have been injured on the mean streets of Toronto. And equally as many calls a day for injured or dead raccoons, as well as several cats that all end up as roadkill.

With so many instances of dead urban wildlife in the city, it's up to us to ensure that when roadkill does happen, we take a moment to give the poor creatures a proper send-off to their final resting place. Be careful out there.