The Worst Roads for Cyclists in Toronto

There's plenty to choose from when making a list of the worst roads for cyclists in Toronto. Be it fast moving traffic, rough road surfaces, lack of bike lanes, tough climbs, or the always tricky streetcar tracks, this city presents numerous challenges for those who commute on two wheels. But, of course, some roads are worse than others.

Now that it's August and I've been regularly on the road for three months or so, there's been countless opportunities to crash, curse and bemoan the state of many streets throughout the city. Although lacking the desire to be scientific about it, I thought that I'd put together a list of the roads that I think pose the greatest difficulty and danger to cyclists.

At beginning of the commuting season this spring, the Toronto Star's map of the week feature highlighted the frequency and location of over a 1000 traffic accidents involving cyclists. I remember thinking this was a great idea at the time. But, I wasn't overly convinced by the patterns it showed. 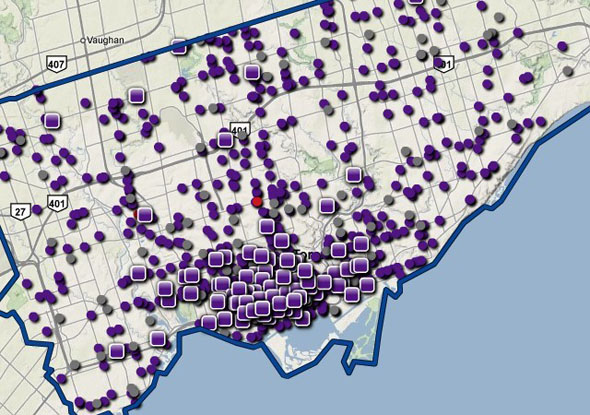 For one thing, so many accidents involving cyclists don't go reported. Beyond this, colliding with a car is only one of the many ways to crash a bike. I've seen some pretty nasty wipe-outs occur from people getting their wheels caught in streetcar tracks. And most of the time people are eventually able to continue on without reporting the incident.

Bearing this in mind, I think anecdotal evidence reigns supreme when it comes to such a list. So, without further ado, here are my nominations for the worst roads (in alphabetical order).

Any street that crosses on/off-ramps to a major highway
This might be a no-brainer, but most cyclists have had the unenviable experience of having the road they're riding on turn into an on-ramp. More times than I care to remember, I've had to choose between getting on a highway (not good) and crossing traffic that's speeding up to do so (perhaps worse).

Bloor Street West (to Keele)
With similar characteristics to the ride along Yonge, Bloor West can get pretty scary in areas. Compounding the the difficulty is the presence of parked cars. Dodging opening doors while not getting hit by passing traffic often involves more than skill -- it takes luck.

College Street
Just because there's a bike lane doesn't ensure safe riding conditions. While it's a good start, other problems can arise: not vehicular traffic, but other cyclists! The daily train of riders along College has a relatively slow pace. Should you be in a rush or want to pass, be prepared to occupy the path of passing cars and aware that you might not make it back into the 'peloton.'

Eastern Avenue (heading west between Jarvis and Coxwell)
Veteran commuters may know to avoid this stretch by taking the Queen St. bridge over the Don Valley Parkway, but having tried taking Eastern, I feel compelled to share just how hair-raising an experience it was. Cars coming off the Don Valley whiz by as you're stuck trying to move into the right edge of their lane. Not easy.

Queen Street West
Any street with streetcar tracks and parked cars poses potential dangers for cyclists. After all, there's only so much space to work with. Now factor in a lack of a dedicated bike lane, and you have accidents waiting to happen. Queen East isn't that much better, but the road's in better shape and the traffic is often not as heavy. 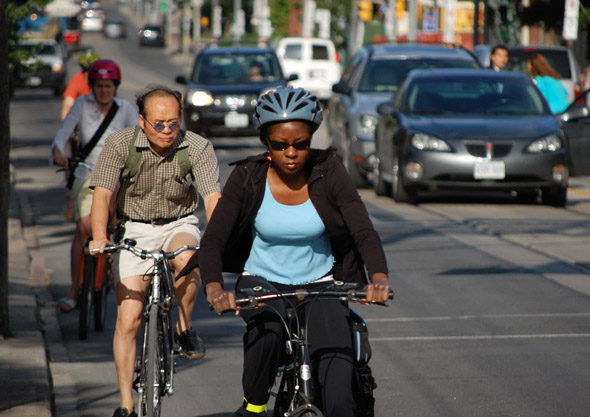 Roncesvalles Avenue
Awful pavement and road conditions, parked cars, street car tracks, unpredictable pedestrian hipsters, this is something of the perfect storm when the street is busy. Forgetting the danger factor, I despise the constant vibration I get from the crappy pavement.

Spadina (south of College)
During evenings, this is actually a pretty good route up and down the city. But, when the many streetside markets are in full force and shoppers and delivery trucks abound, it becomes a bit like an obstacle course.

Steeles Avenue
Speed of traffic is the culprit here, plus highway crossings at the 400 and 404. Even though most of the reported bike accidents come from the downtown core, many streets on the outskirts of the city are just as dangerous, if not more.

St. Clair Avenue West
With seemingly endless construction, poor road conditions, confused drivers, buses driving in streetcar tracks, this is just a plain old mess. Even in areas that have been completed, the narrow lanes don't leave much room for riders.

Yonge Street (south of Bloor)
With no bike lanes, plenty of traffic, and pedestrians regularly stepping into the street, the ride up and down Yonge is always eventful, just not always in the good way.

Lead photo by wvs, second by draughtsmon , both of Flickr.

Map from The Toronto Star.