The John Street Roundhouse Revitalization project had its grand opening yesterday, with a newly refurbished turntable and features a unique 40,000 square foot Leon's Furniture store, the Toronto Railway Heritage Centre and adjacent Roundhouse Park. It's located across the street from the CN Tower and Rogers Centre.

Owned by the City of Toronto, the Roundhouse, which was built in 1929-31, is a 32 bay semi-circular structure formerly used by Canadian Pacific to service steam passenger locomotives using nearby Toronto Union Station. It was declared a National Historic Site in 1990. In 1999, bays 1 to 11 were leased to Steam Whistle Brewery while the remaining 21 bays were unused and dormant. 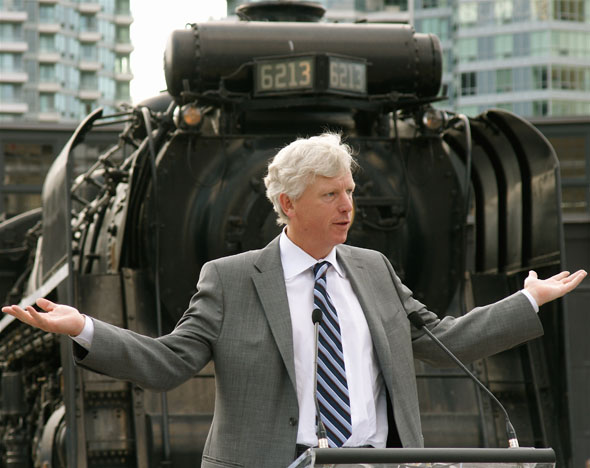 "The new John Street Roundhouse is a great example of what can be accomplished when respect for our heritage is combined with adaptive reuse of an iconic building," said Mayor David Miller. "This partnership between the City of Toronto, Roundhouse Development Corporation, Leon's and the Toronto Railway Heritage Association has resulted in an important attraction in our downtown, complete with its own park."

It must have been quite a challenge to transform an 80 year old, unheated, uninsulated train shed into an environmentally sustainable, LEEDS-certified, contemporary commercial space without compromising the heritage character. 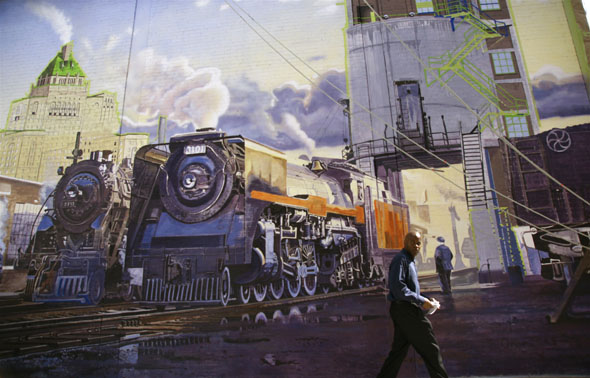 I was pretty impressed with the giant wall-sized mural-in-progress, with artwork by David A. Oram.

The Toronto Railway Heritage Centre includes bays 15, 16 and 17 of the Roundhouse, the 12,000 square foot Machine Shop, most of Roundhouse Park and the turntable area, including the 32 radial tracks.

The Roundhouse turntable is 120 feet long, in order to accommodate the Canadian Pacific Railway's largest passenger steam locomotives. It's one of the longest ever built in Canada. 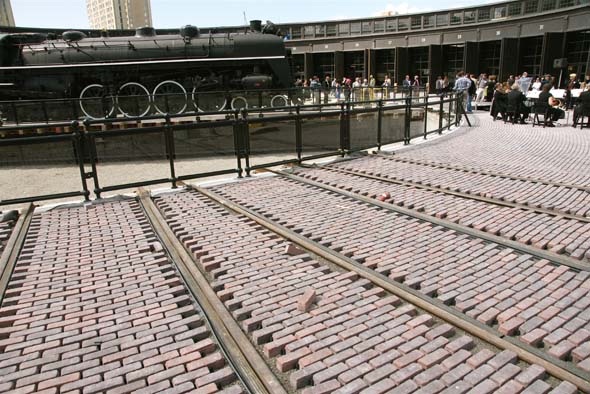 The John Street Roundhouse project is an example of a successful, mixed-use, adaptive re-use of a nationally significant, industrial heritage building. The $25 million rejuvenation of the Roundhouse area includes the rebuilding of the park, the restoration of the ancillary buildings and towers, the continuing operation of Steamwhistle Brewery, the restoration of the museum space and the adaptive re-use to accommodate the 100 year old Canadian retailer Leon's. 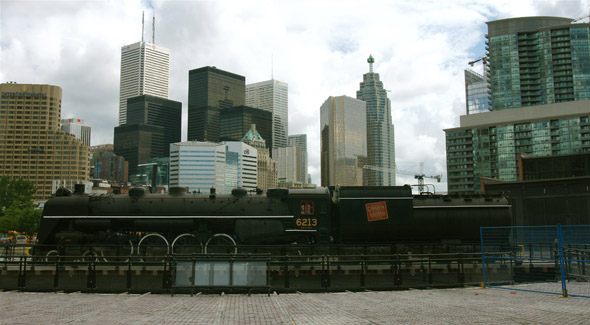 "Leon's Roundhouse project is part of the continual evolution of Leon's, catering to the diversity of our customers," says Terry Leon, President and CEO, Leon's Furniture Ltd.

"Some downtowners are already shopping at one of our suburban locations but many others simply can't get there. As a result, Leon's Roundhouse offers ease of access without a car -- which is both convenient and environmental -- and an affordable, stylish furniture destination that prides itself on offering good value, good selection and great service." 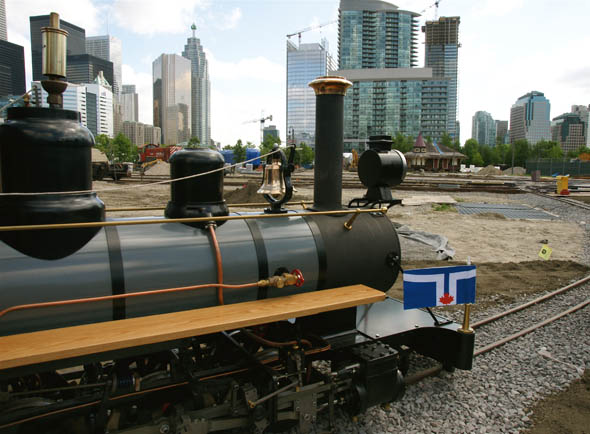 It felt a little out of place to see a large train on the Toronto skyline. While not yet ready for demonstration at the opening, The Toronto Railway Heritage Centre is to include a passenger-carrying miniature railway powered by a steam locomotive constructed during 2009 in the Roundhouse Machine Shop. Looks like it will be a fun first train ride for many youngsters. 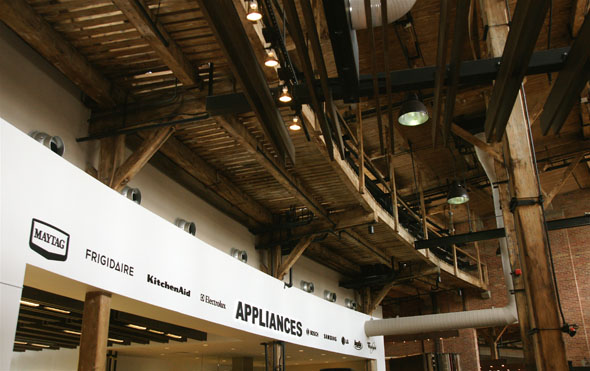 While shopping at Leon's, customers can take in the gorgeous curvature of the building with its soaring 34-foot-high ceilings, an abundance of brick, restored Douglas fir columns and a sweeping wall of glass, offering an abundance of natural light. This unique space will also feature an in-store cafĂŠ, and will host special events such as celebrity chef demonstrations as well as interior design and home entertainment seminars. 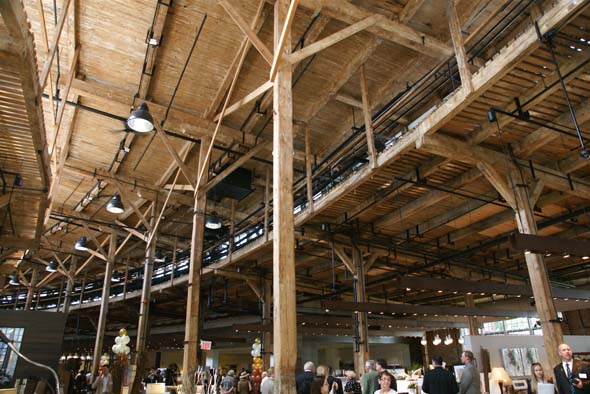 The store will cater strongly to the downtown condo market, specializing in smaller furniture frames and high quality design and fabrics for smaller, urban spaces. Two areas in the middle of the showroom will be dedicated to presenting condo room settings and will be changed on a regular basis.

I've never shopped at Leon's before. One thing that will come in handy is that they've got products in stock and available for delivery at no extra charge from multiple GTA warehouses. Now condo dwellers have another option other than trekking to Ikea for their urban home decorating needs.

Here's what the roundhouse looked like during construction, last March: 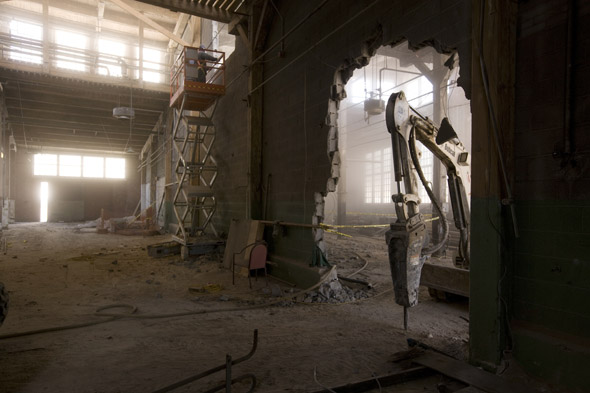 The roundhouse took up 16 acres of property on the area below Front St. 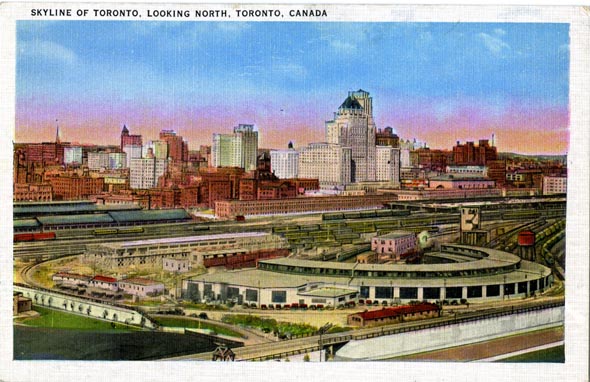 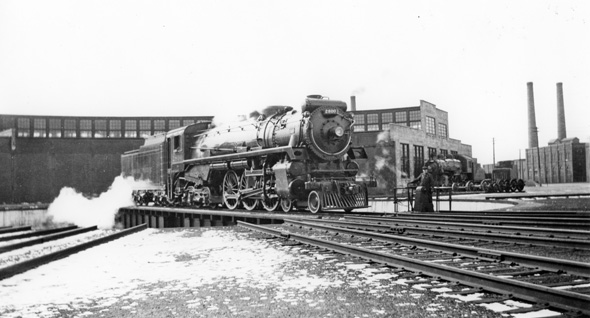 More photos in this mini photo slideshow below:

Photos by Roger Cullman, except for last two historic photos (courtesy Toronto Railway Historical Association) and the photo of the roundhouse under construction (photo by Norm Betts).