The McGregor Sock Company Building, as Reimagined by Stantec

The old McGregor Sock Company was at the top of my list of places to visit during Doors Open Toronto on Saturday. Originally constructed in 1905, the building at the corner of Spadina and Wellington is a prime link to the neighbourhood's past, back when this area of town could genuinely be called the Fashion District. The building, almost forgotten after the sock company abandoned it for a larger facility with more parking, was taken over by Stantec, a group of visionaries who used the post and beam structure to showcase their sustainable-design concepts.

What struck immediately was the dearth of interior walls. The company's mandate is for employees to work collaboratively and clearly flexibility is an asset. This is an open-space concept for everyone, including the Vice President, whose office was turned into a storage room when he opted to work out in the open. Slatted screening divides the enormous area, which are composed of wood salvaged from the Queen's Wharf.

The interior walls are lined with glass walled boardrooms - named after sock patterns like argyle and paisley - which create quiet and private caves infused with light from all sides. Blinds and lighting work on motion and daylight sensors. Stantec lifted the floors to house all the electrical wiring underfoot. The raised floors also control airflow and staff regulate temperature for their individual workspaces from a sort of porthole in the floor. 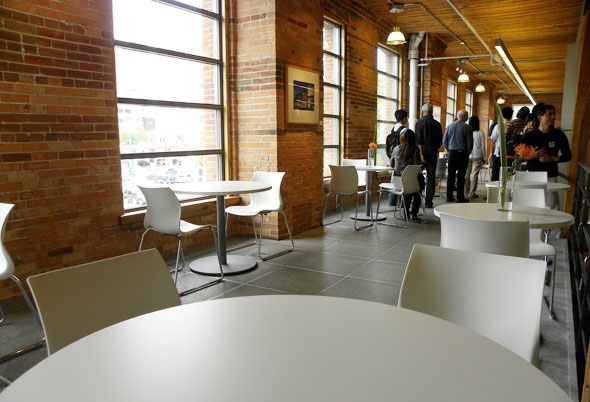 Amenities include bike storage units, staff showers, and dual flush toilets. A cafe adds a touch of class and hint of street-life for chatting with clients over a cappuccino.

I left Stantec's offices full of hope that in the future reused buildings as well as new construction can and will have more focus on sustainability. The biggest challenge is convincing companies that the extra money spent now on such renovation and construction will pay off in the future, both in financial savings and in saving the earth's environment. 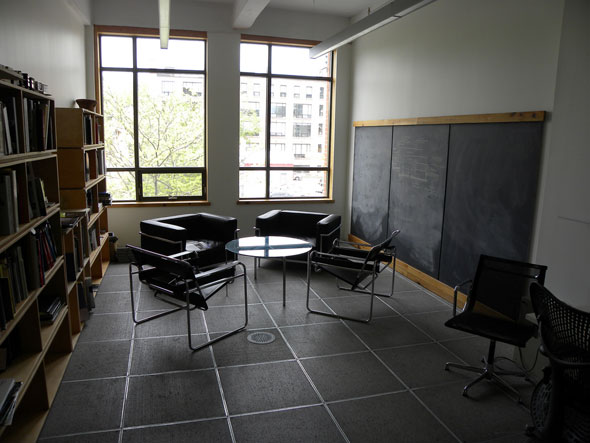 For more photos of the Stantec/McGregor Sock Company building, check out the Doors Open photosets by Global Hermit, Loozrboy, Wyliepoon and Labonny on Flickr.

Writing by David Good. Photos by Jason Paris on Flickr