The Corner of Roncesvalles and High Park

At roughly the mid-point of Roncesvalles Avenue, the street intersects with High Park Boulevard on one side, Fermanagh Avenue on the other. The crossroads says a lot about the neighbourhood, past and present, and features an anomalous landmark building - the five-story apartment building on the northeast corner whose history has always been a bit of a mystery, especially since it was the tallest building in the area for decades.

I've had friends who've lived in the building, and with its wide, institutional-scale halls, there was always a suspicion that it wasn't originally built as residences. For as long as I've lived in the Parkdale-High Park area, the most common tale is that it was originally a TB sanitarium, built out in the leafy, airy western fringe of the city, close to High Park, a story that summed up an image of nursing sisters and concerned relatives pushing wheezing inmates, bundled under blankets in wheelchairs, down to the park for some life-giving fresh air. The story also explained the big Georgian-style home on the left side of the old postcard image of the intersection - a sizeable building whose natural function, so many of us thought, was as a nurse's residence for the "san" across the way.

It turns out we were all wrong. According to architectural historian Alec Keefer, whose knowledge of the streetscape of the old west end is peerless, it was originally the headquarters for York County Savings & Loan, who built it near their developments on High Park Boulevard and High Park Gardens, and various other properties in the neighbourhood. The original office building was the block at the corner of Fermanagh and Roncesvalles, and there were - though it's hard to see it today - storefronts on the ground floor. The company would send representatives door-to-door around the neighbourhood to collect mortgage payments at the first of the month, a legacy of the days when the human touch in banking was a little bit more punctual - and perhaps a bit more sinister. 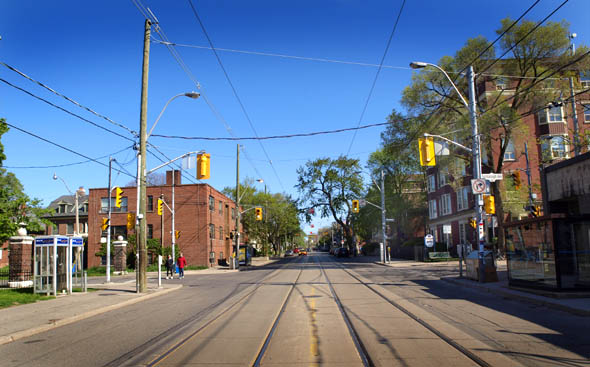 The postcard I've tried to duplicate with the photo above is postmarked May 2, 1914, and the storefronts are long gone. York County S&L apparently backed the wrong party in a provincial election, and were bankrupted not long afterward. The liquidation of the company was apparently overseen by a developer named R. Home Smith, who found that the company had a tidy profit after proceedings were through, and oversaw the conversion of York County's offices into apartments, and the construction of the eastern wing of the building. 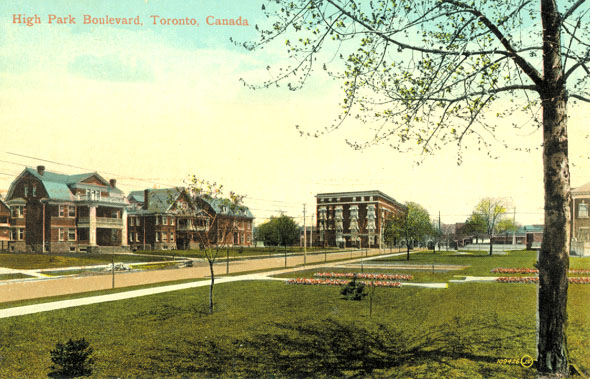 The east wing is obviously in place by the time Valentine & Sons printed the postcard above- a view of the same intersection from the west, looking along High Park Boulevard. Valentine & Sons - based in Dundee, Scotland and "Famous Throughout The World" as their motto proclaimed - are the source for the majority of the postcard images of Toronto taken in the early part of the 20th century, views that are almost stunningly banal, and make us wonder today who, for instance, would buy a postcard image of a tedious stretch of Roncesvalles storefronts, to name one example - a postcard whose rarity has put it beyond my own budget whenever I've encountered one. 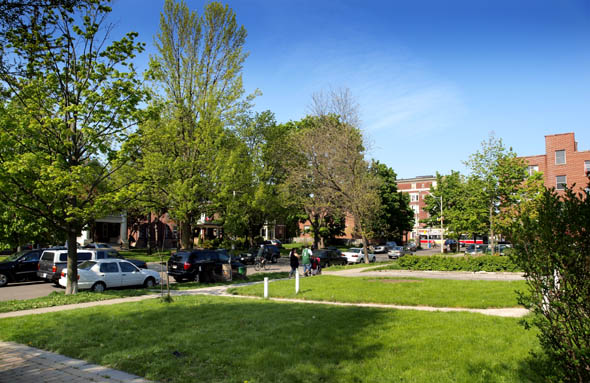 As my attempt to duplicate the image shows, a lot can change in a few decades. You can barely glimpse the old York County S&L offices now through the mature trees along High Park Boulevard today, most of whom weren't even planted before World War One, and the street had the look of a brand new development of monster homes - the sort you'd find in King City today. The three homes on the north side of High Park are still there, hidden behind the foliage, though as Toronto's urban forest canopy is ageing, they might not be if anyone comes back in a decade or so to try and duplicate the old Valentine & Sons postcard.

If anything, these old postcards were the equivalent of e-mail today - "Dear Sir - Sorry it is not convenient for me to have my lesson on Friday the 22nd," wrote one "J. Ettles" to Mr. F. Fowler of 425 Manning Ave. on the back of the postcard at the top of this post. Mr, Mrs. or Miss Ettles didn't even have to bother with a postal code - Fowler's address is simply given as "City," a legacy of a time that was, perhaps, a lot less global than the one we live in now.