Out of the Car and onto the Bike: Bike Commuting on the Rise

The never-ending bike debate in Toronto and the GTA took another twist this week, with the statistics from Stats Canada's 2001-2006 census report saying commuter bike riding increased by 32% during the five-year period. Adding fuel to the bike-riding fire, Metrolinx said in the coming years it wants to drastically increase the number of commuters who ride bikes to GO stations.

As might be expected, people living downtown were far more likely to take a bike to work than their suburban counterparts. The city provides a map breaking down each area of the city and the percentage of residents who prefer biking to work. For bragging rights--west-enders reign king as bike commuters. 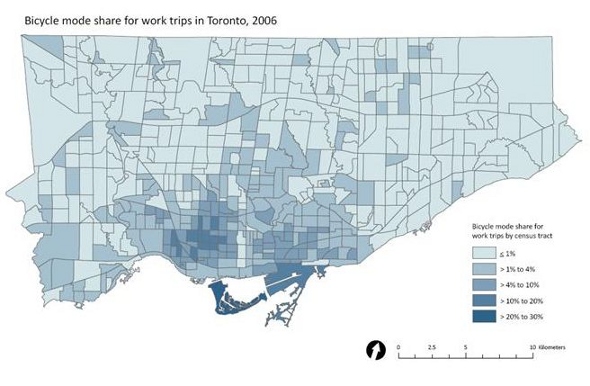 More interesting though is the decline in the number of people driving to work. According to the government's statistics, there was a 5.2% DECREASE in people dragging their car to work. Carpooling must be getting more popular, as the stats point to an 18% increase in the number of car, truck, van, motorcycle, and taxicab riders as passengers.

The most disappointing figure was the slight increase in the number of people taking public transportation to work - up only 1.9% over the five year period. As Toronto continues to grow and traffic congestion worsens, I think that city officials should be looking for new ways to push more commuters to take public transportation to work. A downtown relief subway line or dedicated streetcar lanes would be a nice start.

City officials should take note of the evolving habits of commuters in Toronto. The city's failure to properly install the promised number of bike lanes has been widely reported. I believe the City of Toronto should now be held accountable for this broken promise and implement new policies and strategies that make bike lanes and bike infrastructure (particularly in areas of the city south of Bloor) a reality, rather than a bureaucratic nightmare. And if city officials can't get commuters on bikes (let's be realistic, a lot people can't, or won't, ride a bike to work) it should look for ways to increase ridership on public transportation without being forced to pursue massive infrastructure projects - even though they're much needed.

I am curious what the numbers will show for the 2006-2011 census. Did the massive run-up in commodity (particularly oil) prices force more people into car-pooling arrangements or on to public transportation? We can only wait and see. But in the meantime, city officials should, if nothing else, consider that the traditional method of getting to work (a car) may be slowly on its way out.