Behind the Mic: Edoardo Monasterolo at CHIN

As a Toronto unilingual, it's not surprising I've never listened to CHIN radio. In fact, other than the CHIN picnic and the name Johnny Lombardi, I didn't know anything about CHIN except that they had a building somewhere on College street in Little Italy. After a little research, a visit to the station and a quick interview with the Italian morning show host I couldn't help feel a great pride in the station and a greater pride in Toronto.

The 42-year old station now broadcasts in over 30 languages in Toronto on two different frequencies, 100.7 FM and 1540 AM. While the majority of weekday programming is in Italian, at different times you can hear entire programs in Cantonese, Croatian, Bengali, Punjabi, Somali, Macedonian and Spanish, just to name a few. When CHIN began in 1966, it was the first multicultural radio station in Ontario. Now there are at least two others, CMR 101.3 and CIRV 88.9.

I talked with radio host Edoardo Monasterolo about working at CHIN, Toronto's multiculturalism and his program Wake up Italian Style.

Your show is called Wake Up Italian Style, what is the Italian Style of waking-up? Does it involve more than good cup of coffee and a biscotti?

I wish I would have time for coffee and biscotti in the morning! "Waking up Italian style" has more to do with the music, rather than food. It's about waking up every morning with the best Italian music from yesterday, today and eventually tomorrow. It's waking up trying not to think about the traffic drama on the 400 series or thinking about yet another work day. Waking up Italian style is placing the sun up in the sky even before it goes there!

I have to admit, I can't understand Italian. What is your morning show like?

When are you going to learn Italian!?! Well consider this. Try to imagine waking up at 6 in the morning and having every piece of news, gossip, weather and traffic delivered right to your radio. Not to mention a lot of laughs! It's like two friends being at a coffee shop talking about everything and anything, sipping a nice cup of espresso, for 4 hours. Don't forget a "music pause" here and there. 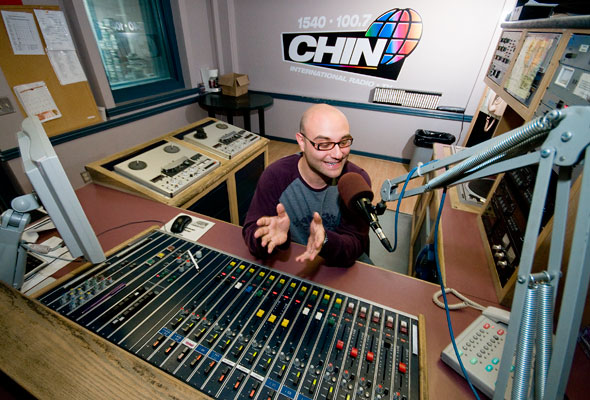 I imagine you are a morning person, what time are you up in the morning? Is it painful sometimes?

If you're not a morning person, you'll certainly become one after a while. The show starts at 6. Fortunately, I'm not far from the station, so I can afford to sleep till 5. The music will wake you up for sure - that or the coffee!

What made you decide to move to Toronto? Did you have family here? Had you visited before? Were you surprised about the size of the Italian population in Toronto?

I guess sometimes everybody does something crazy. I was looking for something to expand my horizons. I have no family here, but I used to spend my summer vacations in Canada when I was a teenager. I guess you could say I've always been Italian by birth, but Canadian by choice. That's why I made this leap. So far I'm loving it, and there's still something to learn everyday. It wasn't until I started working at CHIN that I realized there are almost as many Italians in Toronto as in Italy. In this way, you feel at home even here!

Did you have the job at CHIN before you came here? How different is your program in Toronto than the program you were working on in Italy? 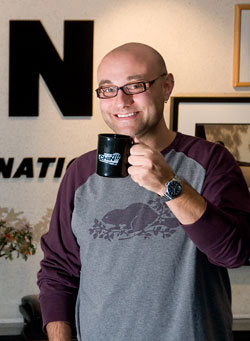 When I came here, I already had a meeting with the president, Lenny Lombardi, so I wasn't really coming here blindfolded and in search of a job. I consider myself luckier then most of my "paesani" that came here with nothing. My way of doing radio changed completely. In Italy, I used to host a radio show between 6:00pm and 9:00pm. 90% of the music we played was English, because that's what the audience wanted. I was speaking to a target audience between 18 and 30 years old. Here, my audience is between 40 and 70 years old. So I guess the answer is...it changed a lot!

I don't know much about the CHIN other than a bit about Johnny Lombardi and the CHIN picnic, tell me what it's like working at the station.

Working at CHIN? How long is this interview going to be? I'll try to make it simple. Imagine that you get to take a plane every morning and choose where you want to go for the day. That's working at CHIN! We broadcast in over 32 languages, which means that we have at least 32 producers from around the world and, of course, 32 cultures to discover every day. Other than hosting the Italian morning show, I take care of the website and that gives me the opportunity to know what everyone is broadcasting on CHIN. CHIN has a sister station in Ottawa, so we are live there as well in the morning.
That gives us the opportunity to live in two different cities every day.

In general, are CHIN's listeners interested in the same stories found on other station in the cities main-stream media - things like violence in schools, Obama's historic victory, the debate over a cell-phone ban while driving - or are the issues much more specialized?

CHIN Radio has programming in dozens of languages throughout the week. How does the station "preserve the cultural heritage of its listeners who have come to Canada from the four corners of the globe" as well as "introduce the varied cultures of our communities to each other, so that a better understanding and better communication can exist between Canadians"? Is this a difficult balance?

This is exactly what I was talking about before. CHIN is the "last bastion of defense" for the dozens of cultures we broadcast to. To balance the roots of our listeners with the ever changing Canadian world we live in, we talk about what's going on here in their own languages. That's how CHIN has and continues to preserve the cultural heritage of our listeners.

I must admit that I'm not eating as much Italian food as I should be, because in this city you can go around the world for dinner every night. But, if I have to choose and eat Italian, my place is Mistura restaurant. Toronto has so many beautiful spots to relax and enjoy the city. In the summer, I love going to the island and relax, away from the city heat and craziness. The perfect spot for the autumn's "foliage" would be High Park. In the winter, I love to ice skate at Harbourfront or enjoy a chilly walk on the banks of the lake.

Were you here for the World Cup in 2006? Where were you when Italy won? Did you feel right at home?

I was here actually, and I felt like I never left Italy. I was right on College Street and we watched the game down there. It was incredible! The entire city joined in as Italy celebrated.

Edoardo Monasterolo is the host of Wake-up Italian Style from 6-10 A.M. weekdays on CHIN Radio 1540 AM.

Behind the Mic is a series of five blogTO interviews with Toronto radio personalities. The first posts in the series featured Larry Green of Jazz FM, Barry Taylor of 102.1 the Edge, Matt Galloway of CBC Radio and Roger Lajoie of The Fan 590.