It's kind of ironic that I'm stuck waiting for my Queen streetcar en route to the official TTC launch of thier Next Train Arrival signs. And sure enough, two streetcars arrive back-to-back after a 20-minute-plus wait.

The new program, which launched yesterday afternoon at Dundas subway station, alerts commuters when the next subway train will arrive at the station via the Onestop Toronto Network.

In its current incarnation, this service is rather limited in usefulness, such as during rush hour, when trains run about every two minutes. But it can alert commuters to possible delays, which would be a lot better than having to wait and wait, not knowing what's going on, only to eventually hear a muffled announcement over the intercom.

"Now you'll know another train is arriving shortly so you don't feel compelled to get on a packed train," says TTC chair Adam Giambrone (pictured above). "They will also show when the following train will arrive.

"This system uses the block signal system for subways and GPS for buses and streetcars. Eventually, we'll have LED screens on poles or built into all-new shelters that will show the expected time and physical location of the next vehicle." 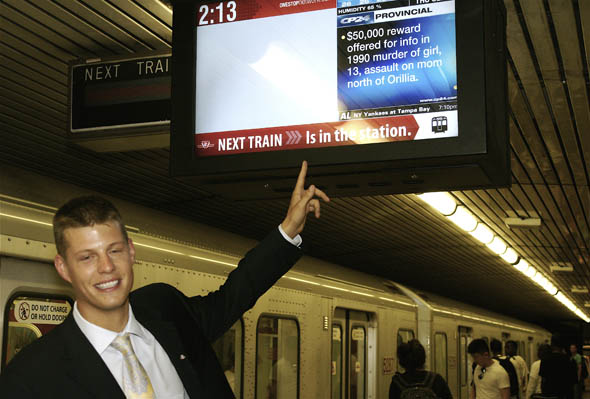 I found it odd that the screen showed that the next train was "in the station" when it pulled in, instead of already letting us know when the following one is scheduled to arrive.

"These systems will improve as the algorythm corrects itself over time," says Giambrone.

Next Train Arrival signs will be installed in all 69 subway and rapid transit stations by the end of 2009.

Tech-savvy TTC commuters will be pleased to know that the TTC is set to launch email alerts over the next couple of months too. "We've also got a trip planner to be launched next June and an e-commerce initiative in the first quarter of 2009," says Giambrone. So you will soon be able to buy your TTC Metropass online, as well. "All these things help customers get where they want to go without delay," says Giambrone.

This is great, but way overdue. We've had MyTTC.ca create a trip planner of their own in the absence of one that should really be an essential service provided by the TTC. Better late than never, I guess.

You may be wondering why the TTC is spending its already-strapped budget dollars on this venture. Giambrone says it costs less than $5,000 per station and the screens are paid for by advertisers. "This is part of an $8 million budget that was pre-approved at the last commission meeting," says Giambrone.

Soon we will get fancy LED screens on bus and streetcar shelters, letting us know when the next vehicle will arrive. This way, if I'm waiting for that streetcar on Queen Street, at least I'll be able to make a more informed decision whether to wait it out, walk or hop in a cab.