Last weekend's Woofstock festival, brought Toronto's dogs and dog owners to St. Lawrence Market to frolic among the many vendors and booths.

I was amazed to see such a variety of breeds this year. It looks like our city is also a mosaic of cultures from a dog's point of view. I a Jug (Jack Russell Terrier mixed with Pug) and Afgan Hound, Great Dane, Chihuahua, English Springer Spaniel, Pomeranian, Yorkshire Terrier and Bassett Hound all in one day.

"I picked up food, cleaning products, a harness and doggie frozen yogourt in banana and peanut butter flavour," said Julie Burns, who had her hands full of loot from all the vendors' booths. Burns gave Georgia, her one-year-old Cavalier King Charles Spaniel a ride in its own little green carrier, worn somewhat like a mother carrying her baby.

Many more cute pooches-in-arms in a mini photo slideshow after the jump.... 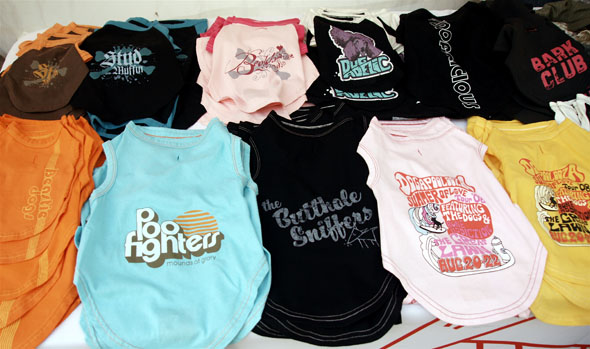 Then there was Calypso, a six-year-old Chihuahua, who was also the mascot of Calypso's Choice who sell tiny clothes and accessories for tiny dogs.

Perhaps the most unusual sight was Robin, a seven-year-old clipped Pomeranian (pictured at the top of this story). Walking around with a fur coat in 30 degree temperatures can't be fun, so his owner, Jeff Scott had him trimmed to keep him cool during the summer.

Wandering around the doggie marketplace I came upon a shopping cart full with a little Yorkshire Terrier perched atop. Cute. Coming to the rescue of the eight-year-old Miss Grace Wonder was Eva Jalin. "Audrey Hepburn had a Yorkie named Famous," says Jalin. "Miss Grace Wonder has bloodlines to Famous," she assures me. 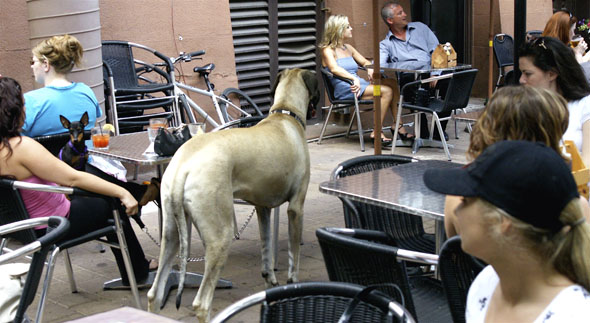 Perhaps one of the most unusual vendors was Mary Swark-Hougaard, a.k.a. The Dead Dog Lady, a singer-songwriter who was pedaling pet tributes to help console those who have lost a beloved four-legged friend.

Many of the vendors came from the U.S., including Gerry Stewart of ZiwiPeak, who was displaying their line of natural New Zealand pet nutrition products. Because Fido deserves only the best New Zealand lamb.

Stewart said it was refreshing talking to Canadians, having done the dog display circuit around the States a lot. "The holistic thinking and attitude here is much different in the U.S." he says. "In Toronto, they're genuinely friendly."

Dogs and their owners spilled onto some of the surprisingly dog-friendly patios by the end of the day. It was certainly a dog day afternoon for all.