The Rise of OBEY Giant on Queen Street

I don't think I've yet come to terms with the effects of rapid gentrification in some of my favorite Toronto neighborhoods. The addition of Starbucks in both West Queen West and Leslieville is symbolic for those parts of town. It's a sign of things to come, one of them being an increase in advertising.

I recently came across bus shelters in front of the Drake and the Gladstone, pasted with Shepard Fairey's classic Obey Giant posters. Since the late 80's, Fairey's graphics spread onto streets across the world in the form of original murals, stencils and thanks to his posse, a never-ending collage of posters. His work is mostly a parody of political and corporate propaganda. It has become a global movement and it has influenced many including designers here in Toronto. 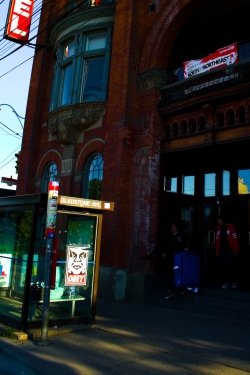 It's not the first time the Obey posse has put up posters in this city. I would see them on abandoned buildings and construction zone barricades, alongside graffiti and street ads. This is the first time however they've shown interest in trendy, highly visible nightspots. Their timing couldn't be better, at the eve of NXNE.

With the Obey clothing line in full swing across the country, I can't blame them for a little guerilla marketing. On the flip side, they should be conscious that Obey is no longer just eye catching street art, it is now a full fledged brand. Their past anti-establishment, anti-corporate stance might haunt them and bite them in the ass. Not to mention, defacing public property is just not cool, it just robs us of our public space. I think their recent in-your-face attitude in Toronto is backfiring, as Fairey's original motives are getting watered down. The posse should tone it down a notch, and get back to basics, to subtle covert propaganda, back to their original tactics of backstreet worldwide domination.

So where next... The Social? I hope not.