Learn Something New Everyday, Thanks to Jane

I'm always a sucker for some good learnin', so when I heard a historical walking tour of my neighbourhood was planned as part of Jane Jacobs Day, I put on my walking shoes and joined a curious crowd of about fifty people. I was late in arriving, but I knew it wouldn't be hard to spot the mob.

We met up at the southwest boundary of Parkdale (Roncesvalles and King), and ventured east along Queen. The tour guide, Alec Keefer (President, Architectural Conservancy Toronto) lead us through the 'hood, stopping at most street corners to talk about the history of the buildings around us, and to answer questions posed by his curious followers. 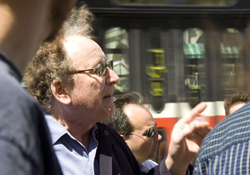 Mr. Keefer was a phenomenal speaker, able to throw his voice enough to be heard over most of the traffic and hecklers (of course there were hecklers in Parkdale). He was knowledgeable and passionate about the architecture and history of Parkdale. He seemed to be bursting with information. The walk continued along Queen to the Gladstone and lasted about three hours, but I'm sure Mr. Keefer could've chatted about parapets, keystones and for spires for much longer! 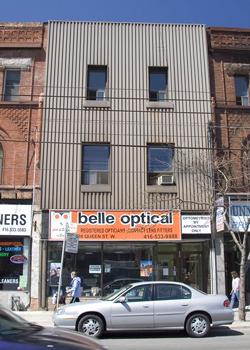 ** Did you know that Queen Street West was once home to six theatres, and that a weekend day trip out of the city in the late 1800s consisted of lunch, shopping and a show in Parkdale?
** There's a city by-law that restricts the length of parking lots built in front of strip malls to 45m, to help keep the "suburban feel" out of the city. Yessss!
** I learned that the apartment building on the corner of Queen and Dowling, as well as the Big Bop (at Queen and Bathurst) were used as housing for fraternal societies like the Masons. Crazy, eh?
** The fire in the Queensboro, at 1495 Queen St. W., took the lives of two women when it burnt in 1998. It was expropriated by the city last summer and is slotted for renovation. It's turning back into affordable housing.
** The Rothburn family (or is it Rathburn?) built three houses along Dowling Avenue within the span of 15 years in the late 19th century, and they're a perfect example of the late Edwardian/early Victorian turn over in architectural style.
** The apartment building at Queen and Lansdowne was once the playing field for Parkdale Collegiate. The school board sold the property to a developer, but then had to buy out some home owners to build the current playing field. Talk about lack of foresight!
** The Pizza Pizza at West Lodge and Queen is in one of the oldest buildings in the neighbourhood. It was a typical family home, utilitarian and not very decorative. Now it's covered with humongous numbers (967-11-11).
** Houses south of Queen are generally cooler than houses in northern Parkdale. This is because streets south of Queen run north-south, and allow the breeze from the lake to blow (we experienced this first hand, when we turned the corner at Dunn and were almost blown away by the wind).
** Those buildings with aluminum siding covering their beautiful brickwork were made that way so they could be brought up to fire code by lazy landlords.