Filosophy swooped in where Pam’s Roti once was, replacing the island cheap eats with authentic Greek pastries.

They make all Greek pies in their scratch kitchen, otherwise bringing the best baked goods they feel the city has to offer from places like Serano to this neighbourhood. 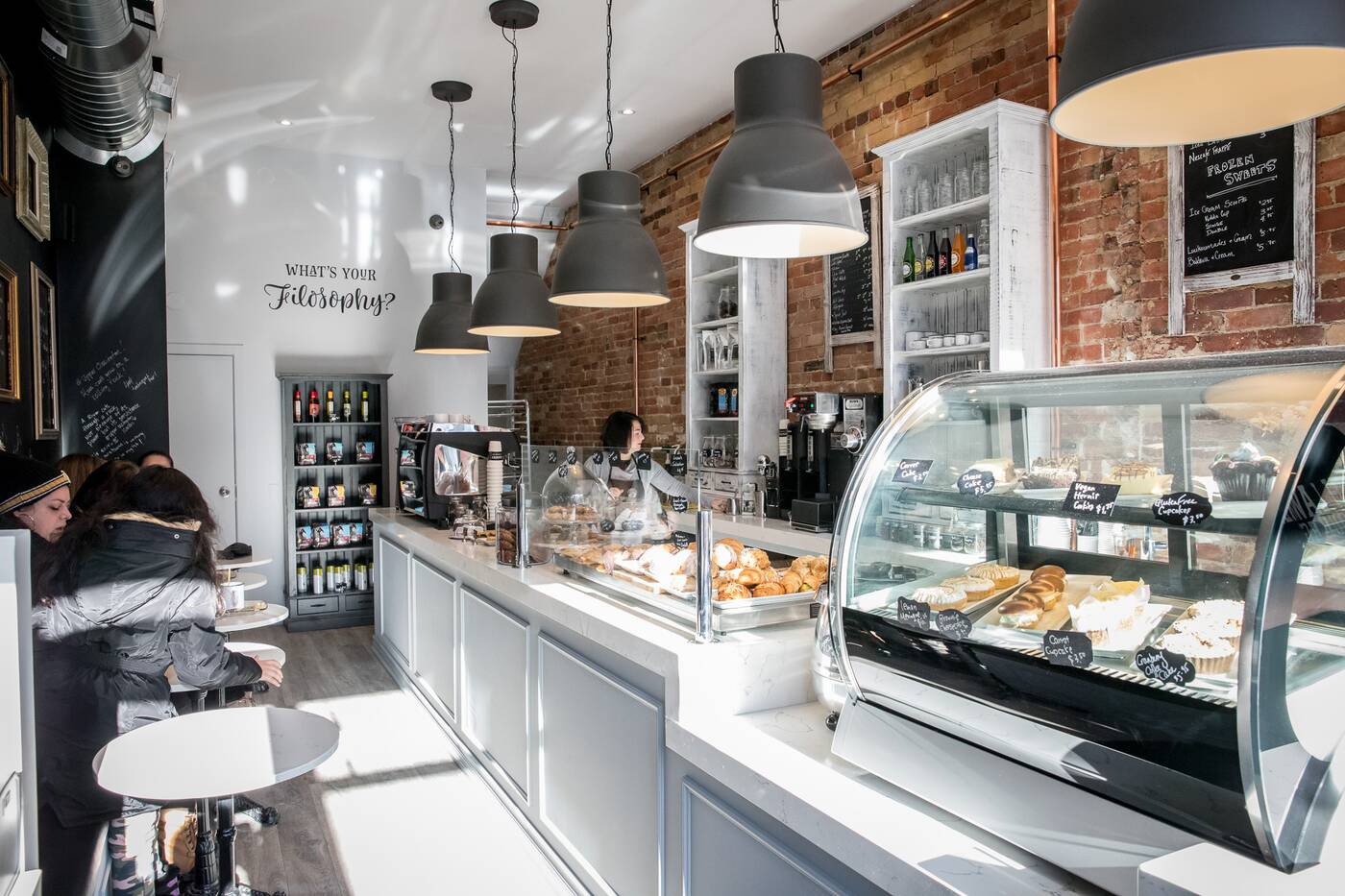 Owners Toula and Peter Bekiaris took the lead on design with help from Kelly Driscoll Design. They discovered a brick wall they could expose to use as an anchor. 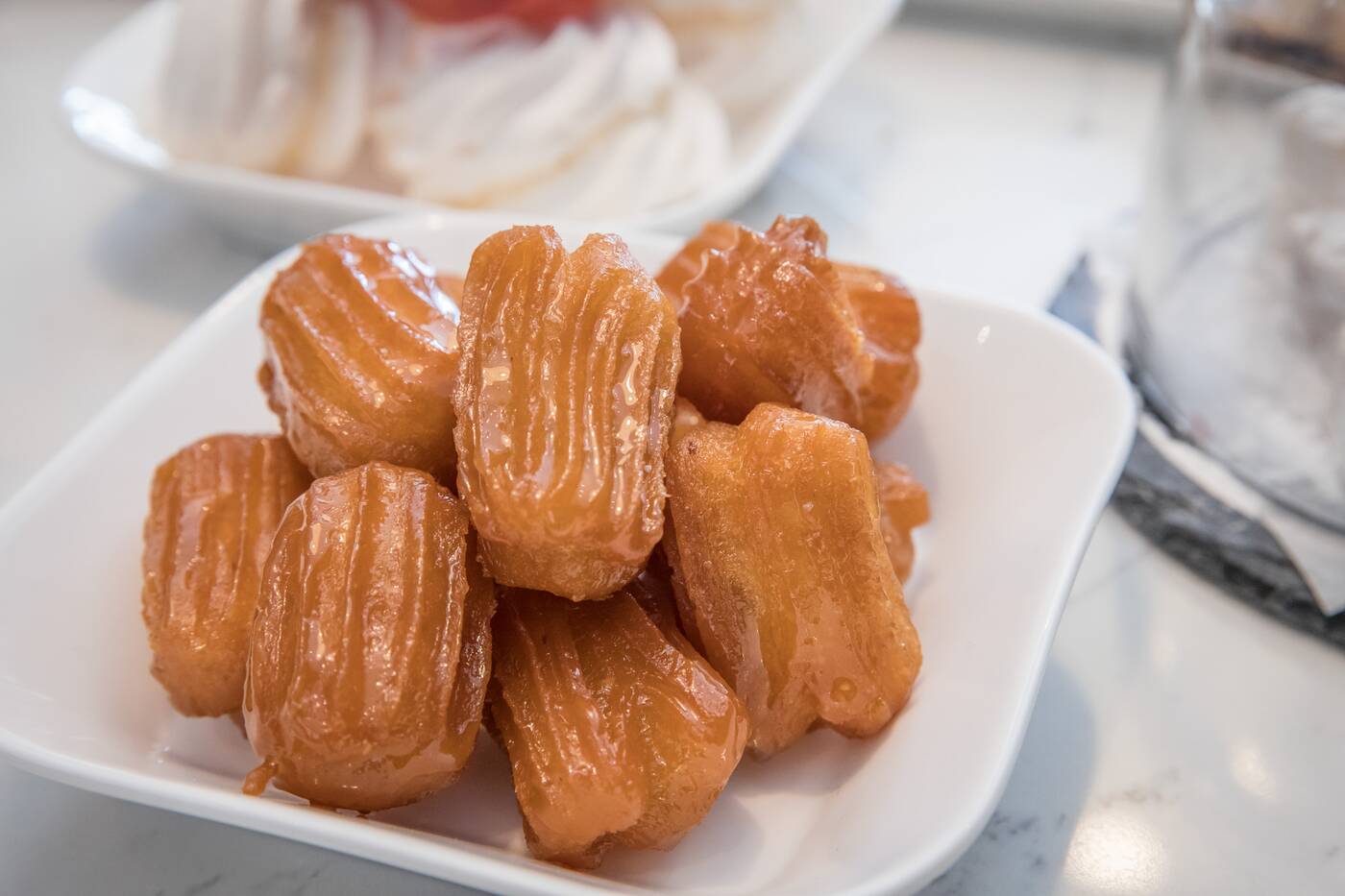 Mini greek honey cakes called touloumbes are a play on Greek honey donuts called loukoumades, but these have ridges so the syrup they’re soaked in can grab hold even more easily. 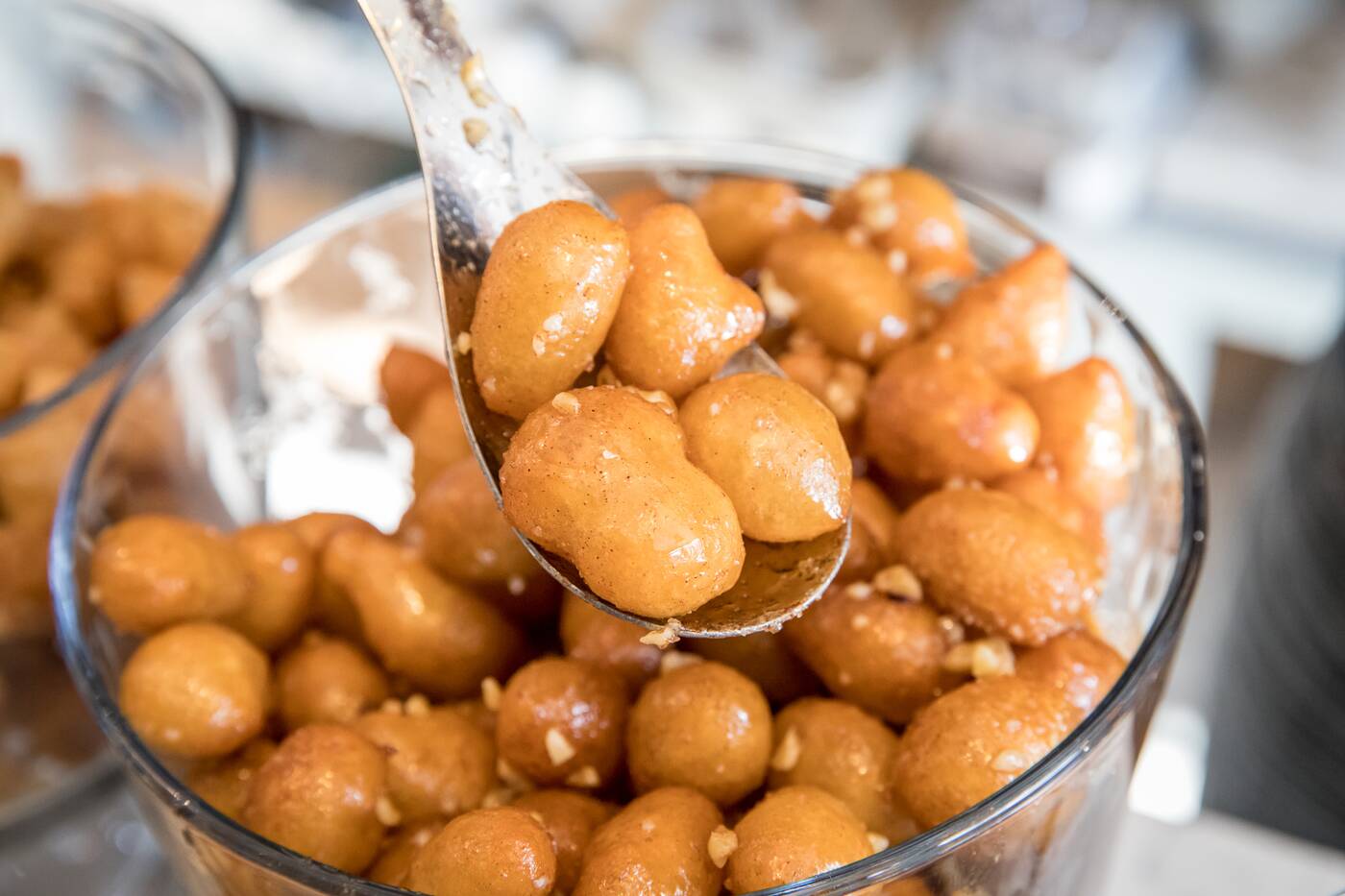 Mini loukoumades by contrast are smooth, fried little puffs of dough sleeping in honey and syrup in a massive trifle case. They’re chewy and sweet yet airy and addictive, sold by the box ($4.25). 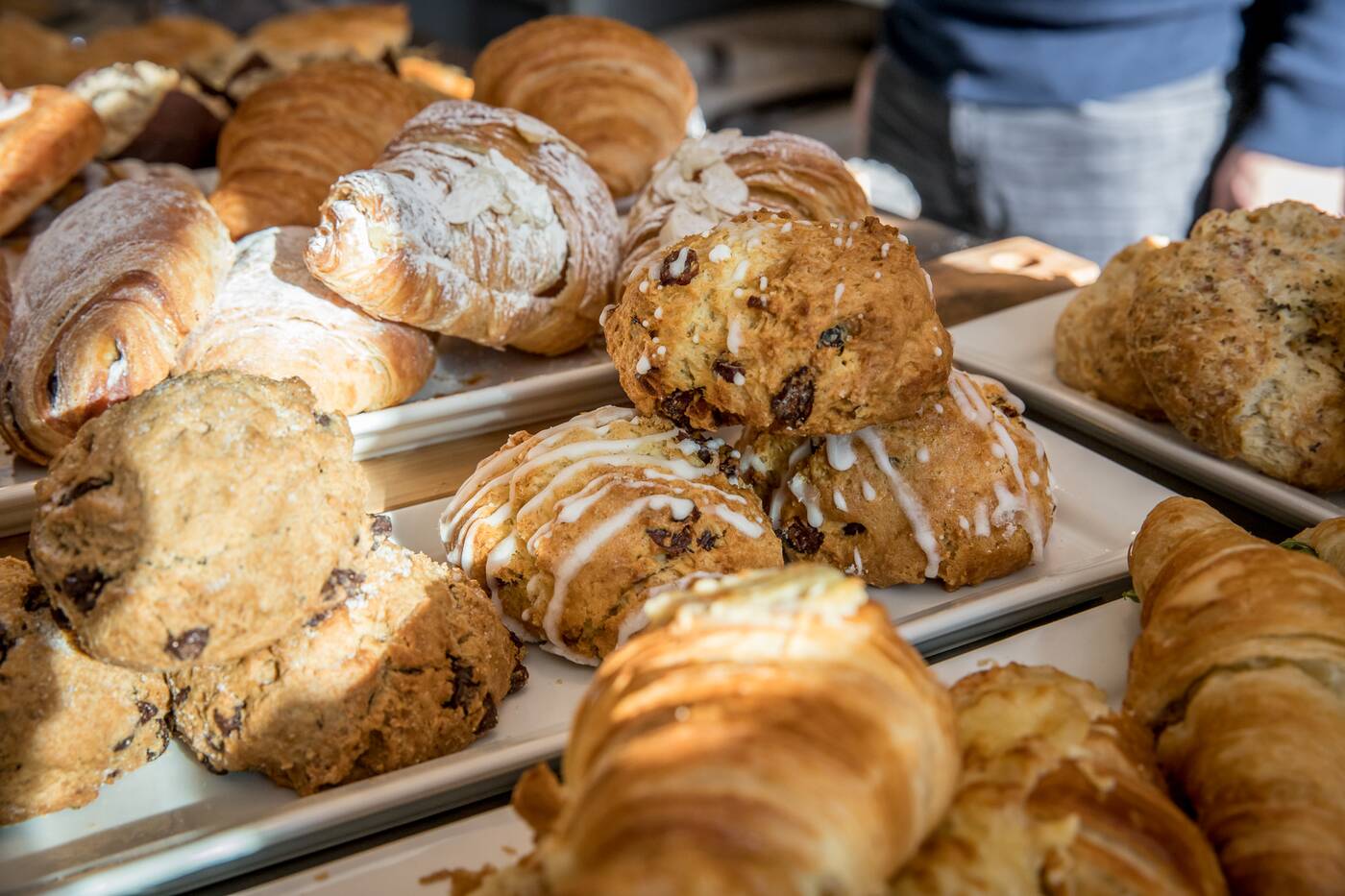 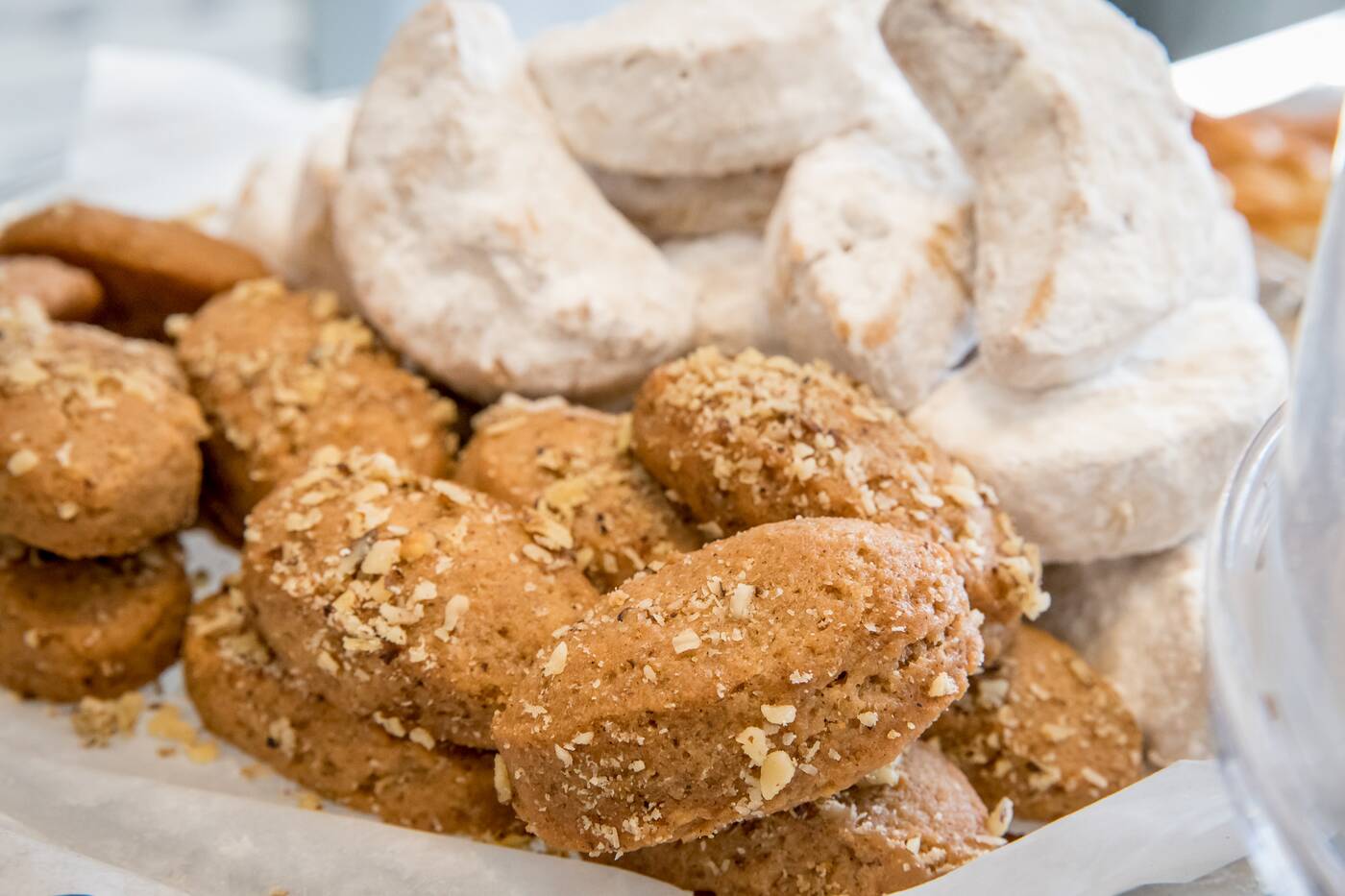 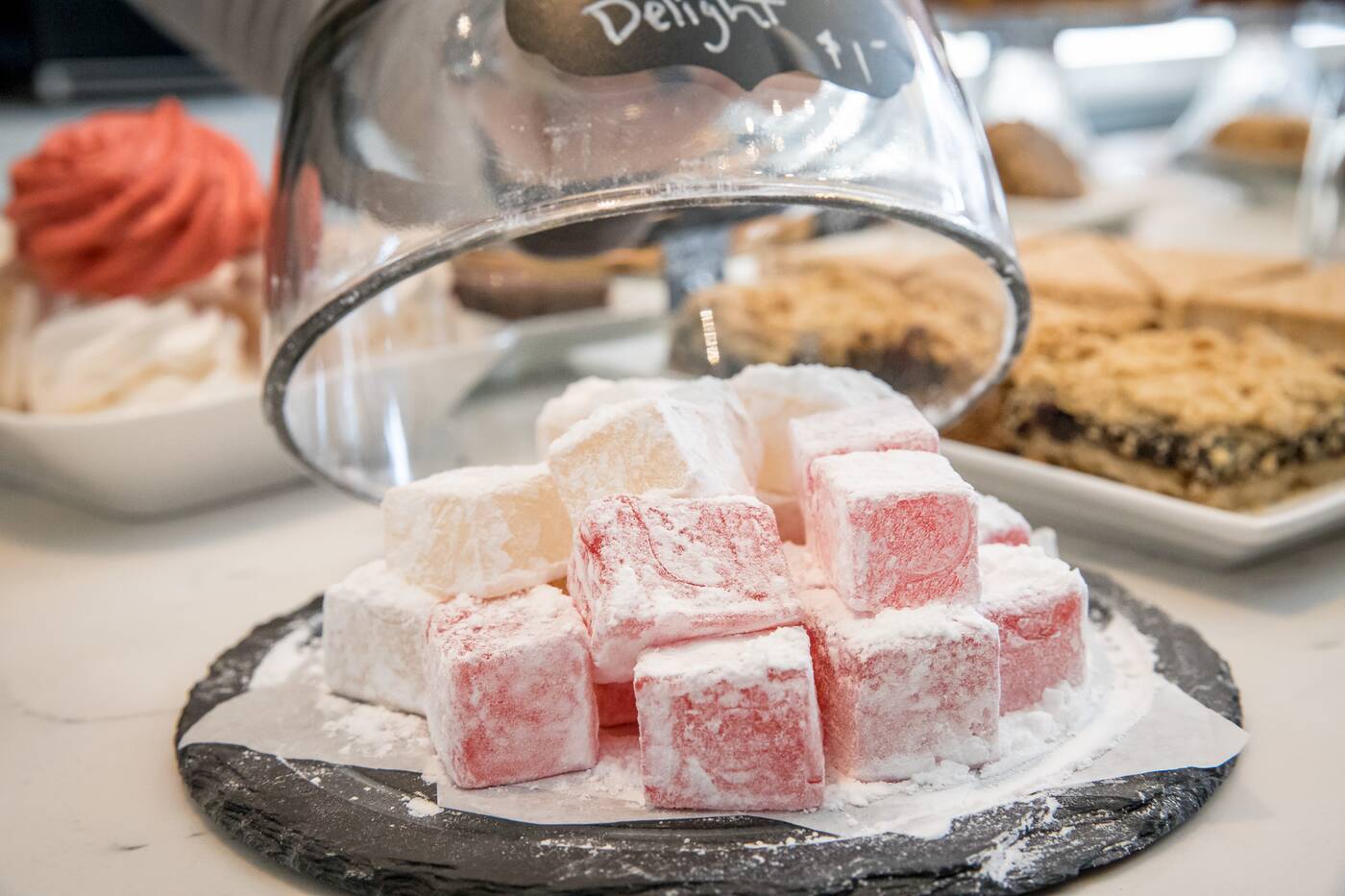 Turkish Delight goes for a buck a piece here, a chewy treat made from a sugar and starch gel. 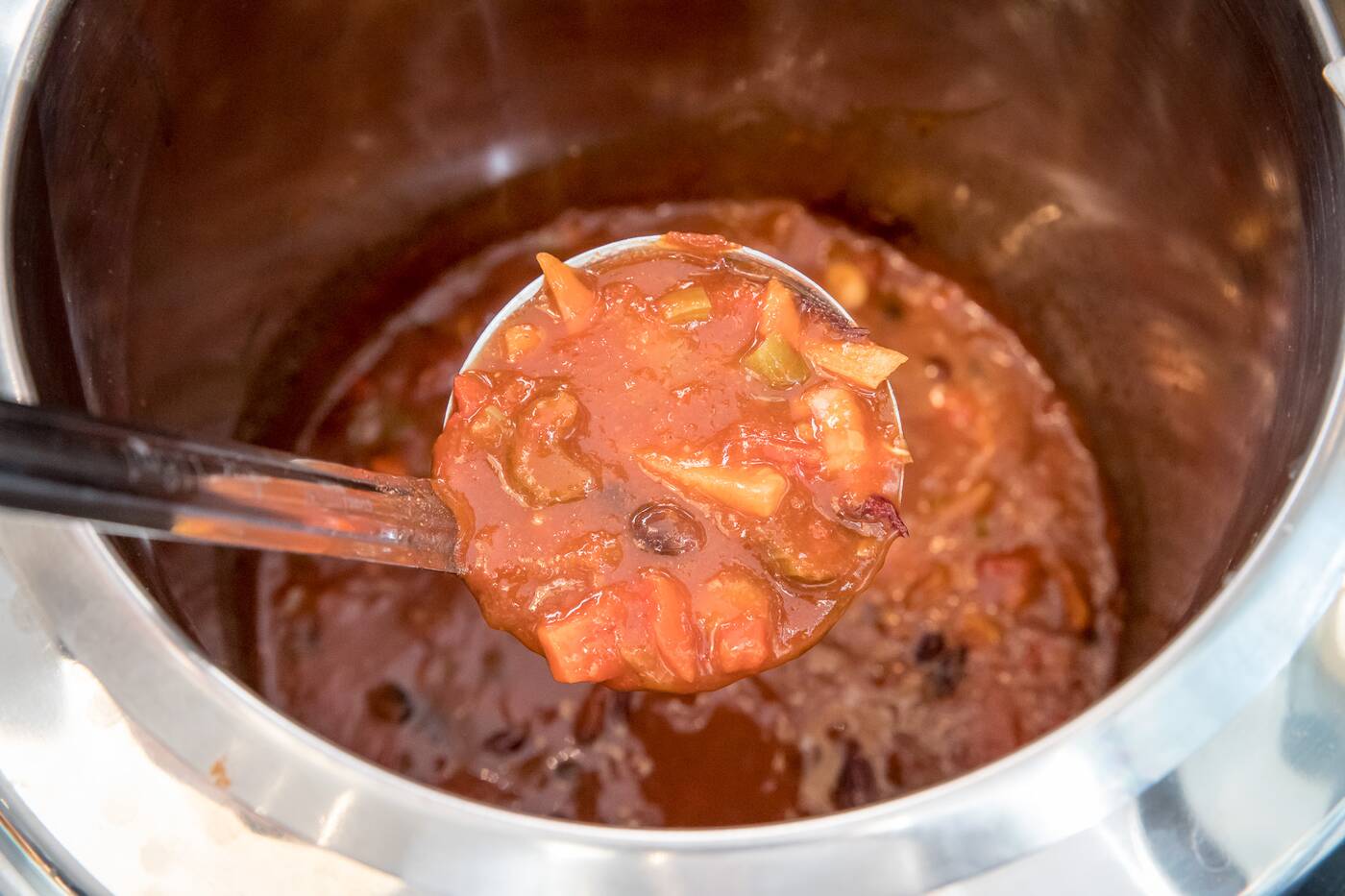 There’s usually a soup on special, and today’s vegan chili from Foodbenders plays to the plant-based crowd. They also have gluten-free baked goods and vegan galettes from Madeleine’s Pie. 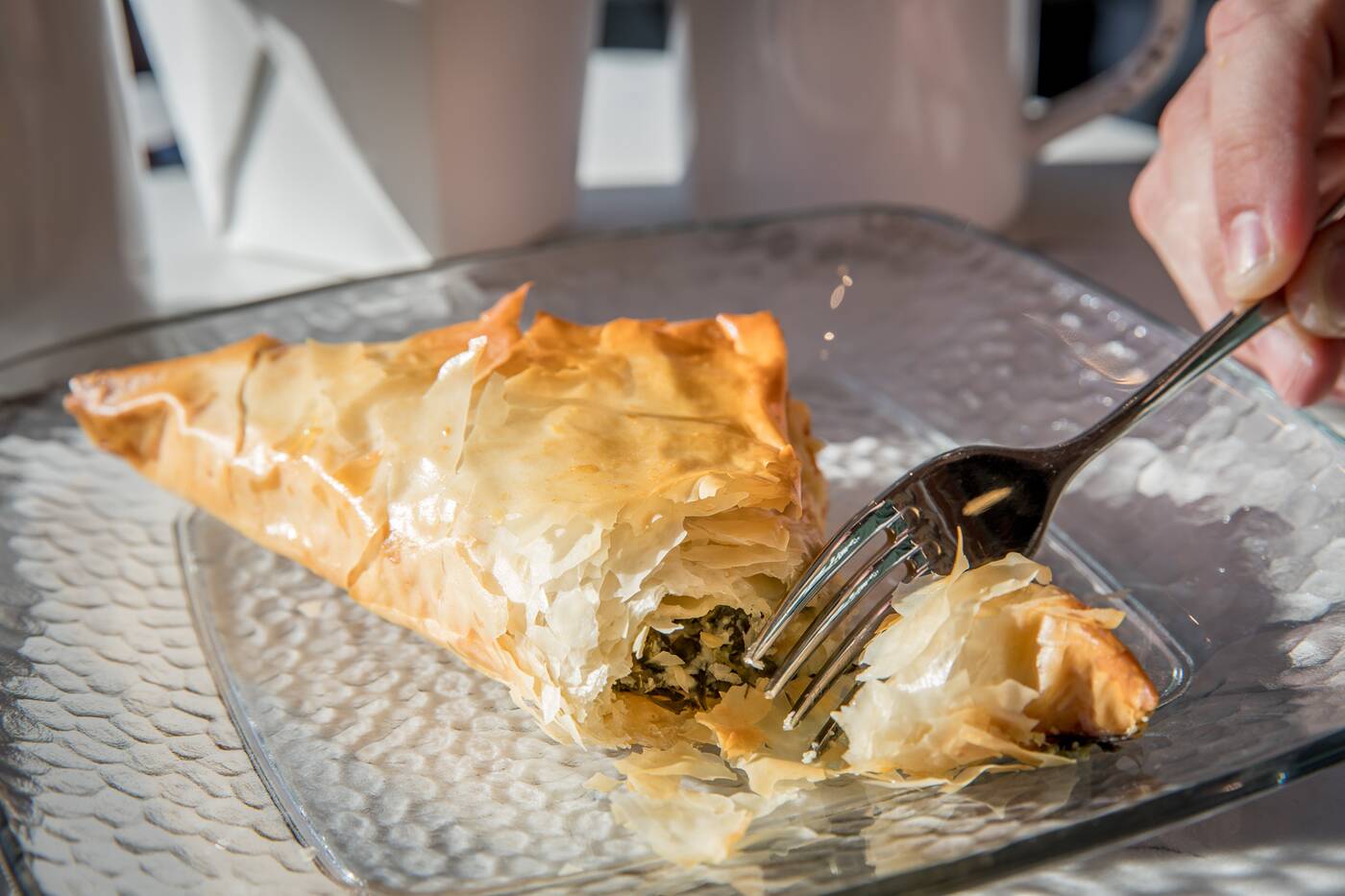 Your classic spanokopita (spinach pie, $4.75) is made fresh here, and comes in both triangular and rectangular varieties. You might think there’s no difference, but the phyllo pastry on the rectangles is actually thinner than the crispy, flaky triangles.

There are also cheese pies, vegan versions in flavours like butter chicken, and a sweet custard version called bougatsa. 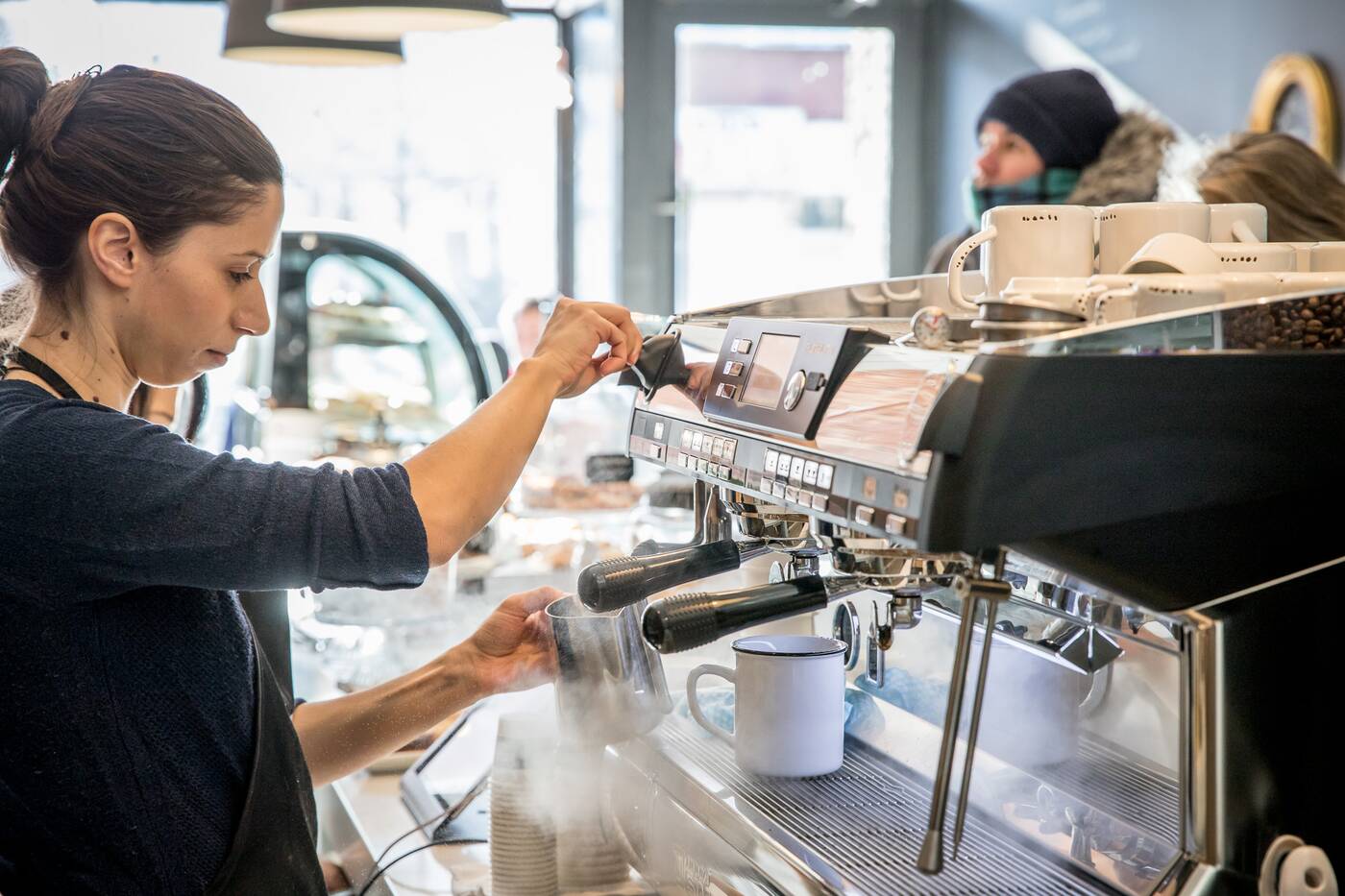 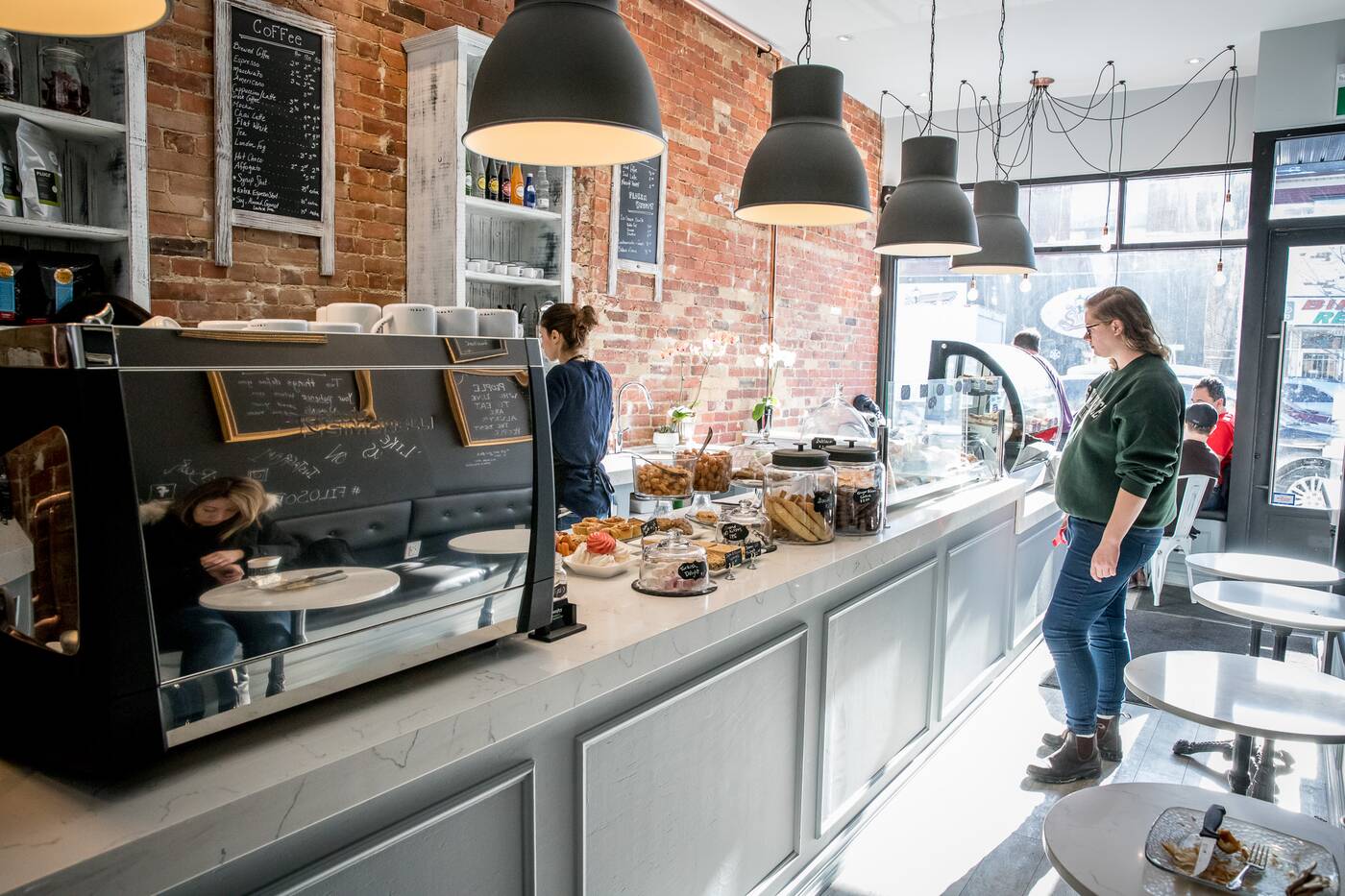 Indeed, the space does have much more of a Pinterest, boho type feel than the homey old accommodations of Pam’s, complete with a chalkboard wall, shabby chic frames, and marble tabletops.

Whether this is a sign of the changing landscape of Bloorcourt or not, folks sure seem to enjoy cozying up in this cute, modern Greek cafe. 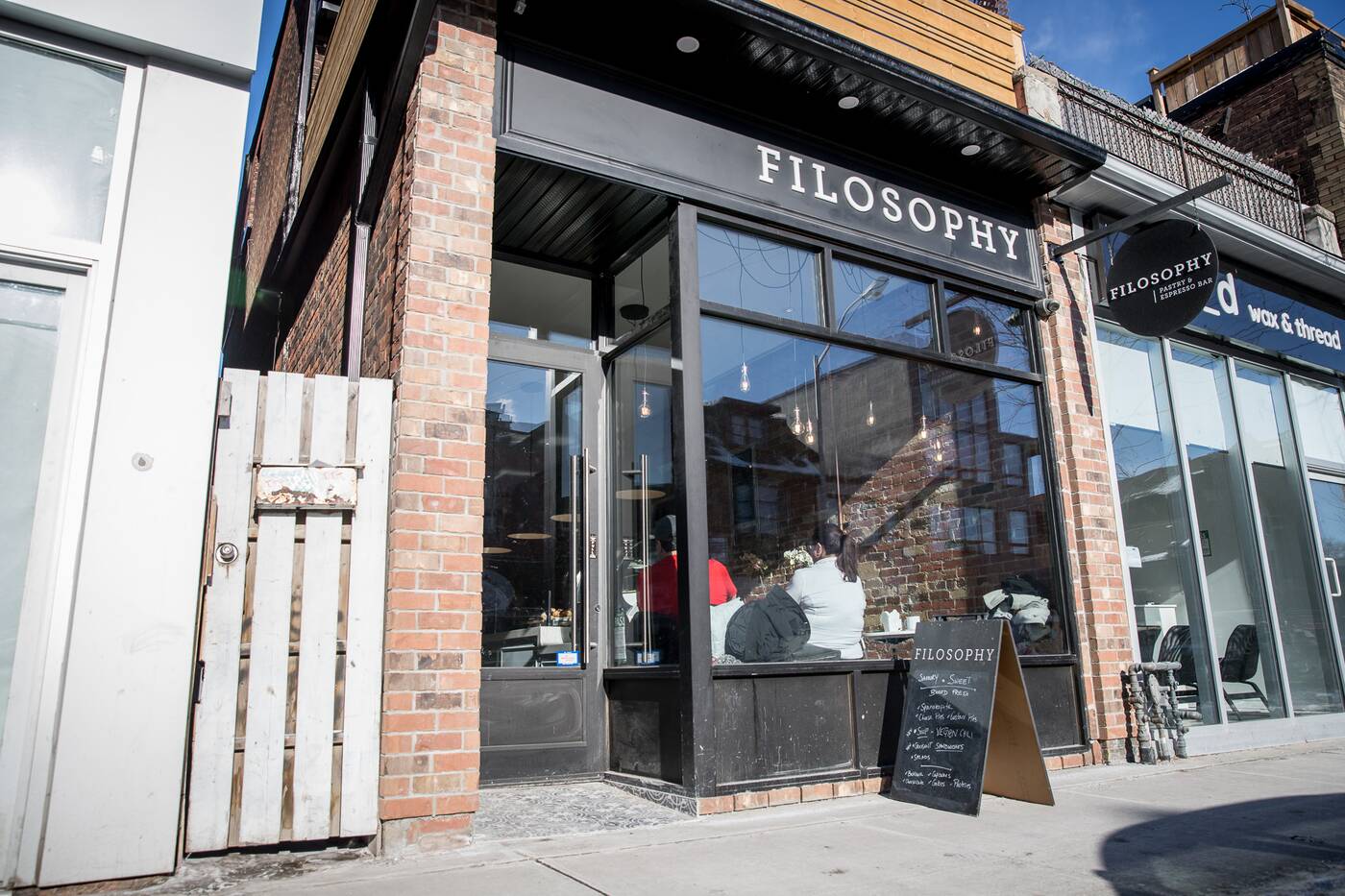