The 222 is a dimly lit, intimate bar serving elevated cocktails in a space resembling a hotel lobby from the 80s.

The bar is a new venture coming from the owners of longtime Toronto favourites like, The Communist's Daughter and 3 speed.

The building where 222 is now has had many lives, prior to this it was home to a juice bar called The Grow Op, and before that, a Portuguese fish shop. 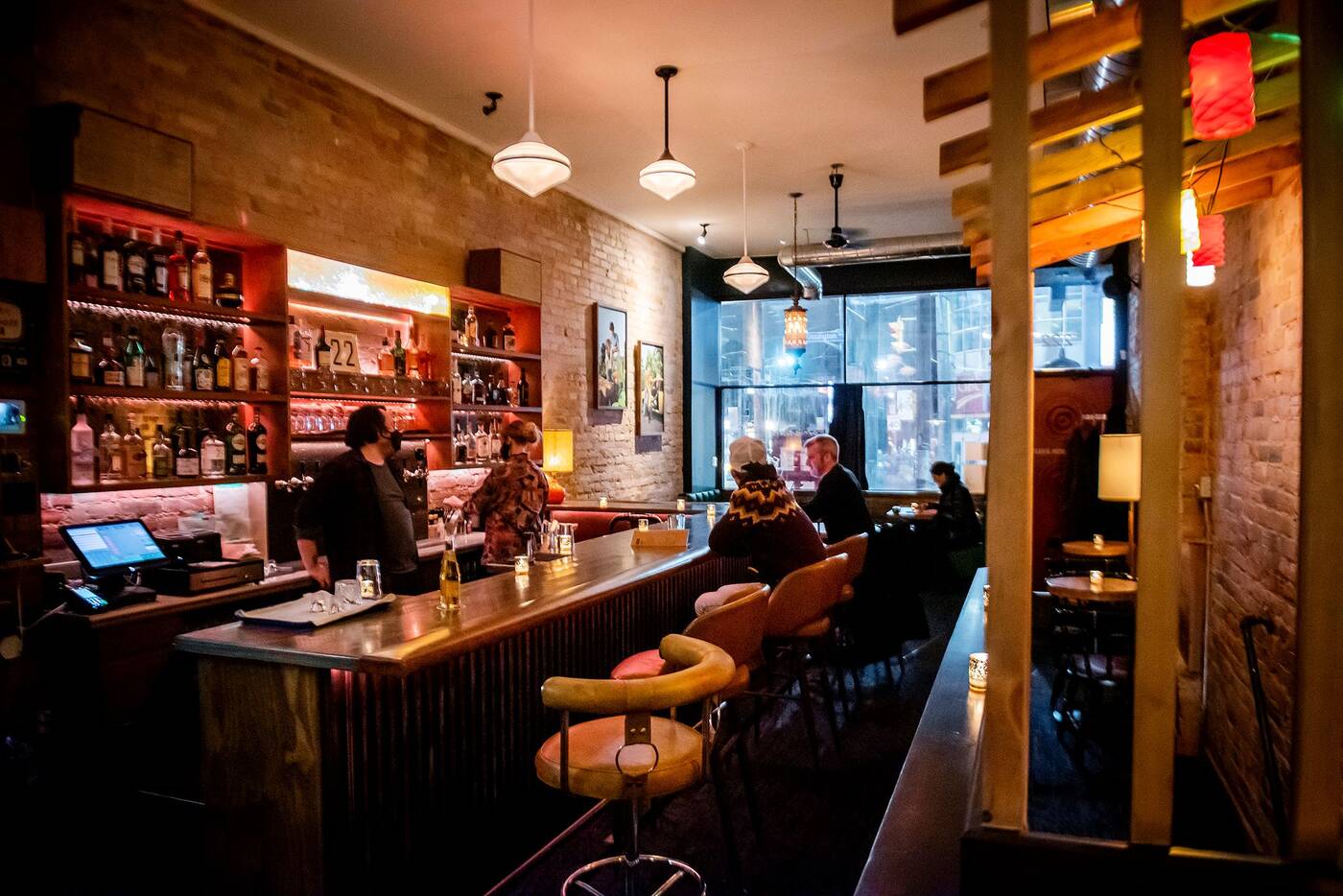 Co-owner Paul Emery says the whole place was gutted out when they moved in, building out the bar, adding in carpet and overall cozy-ing up the atmosphere. 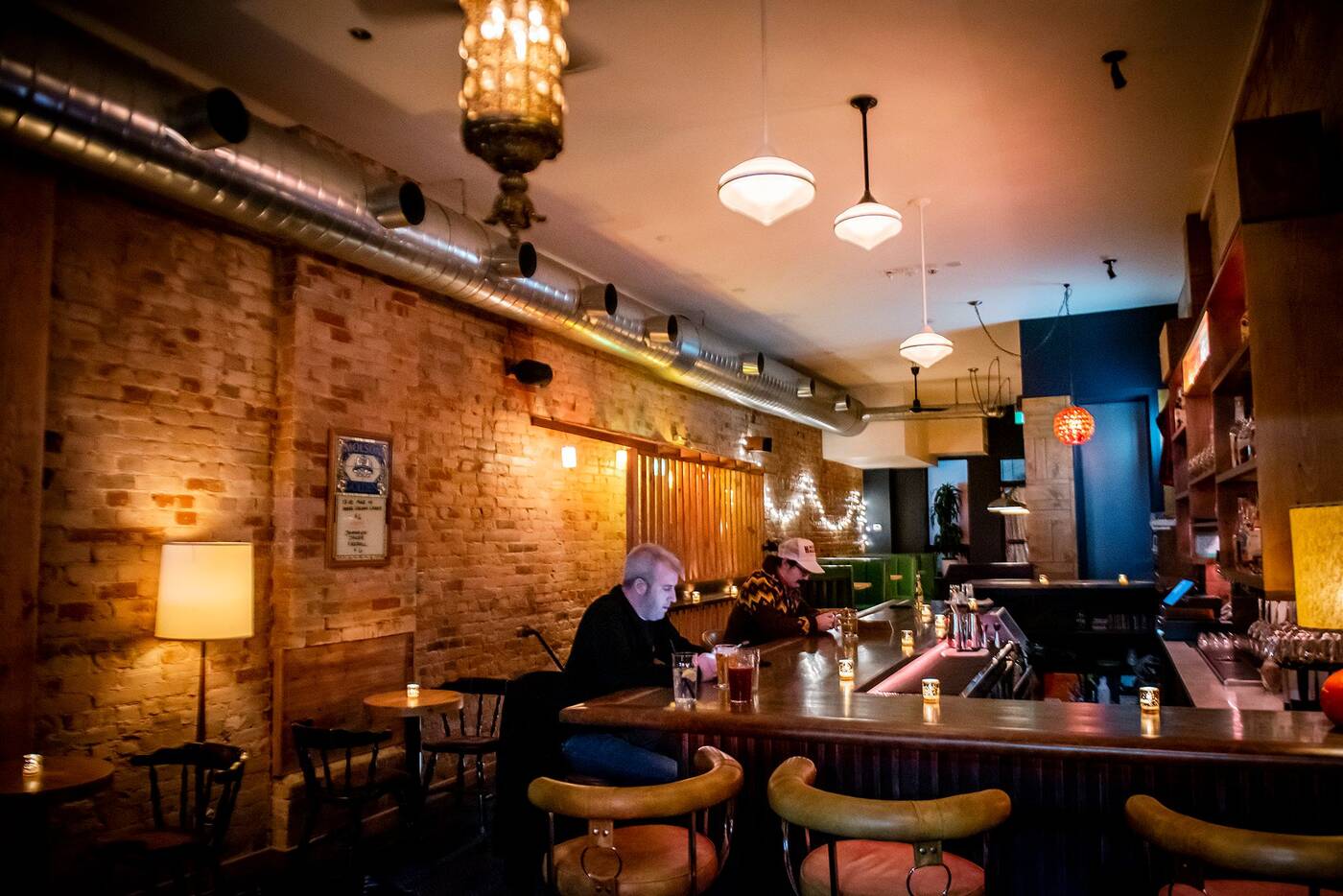 Candles adorn each table, with orange-hued lighting inside, it feels a bit upscale, but not so much that you'd need to adhere to a dress code. 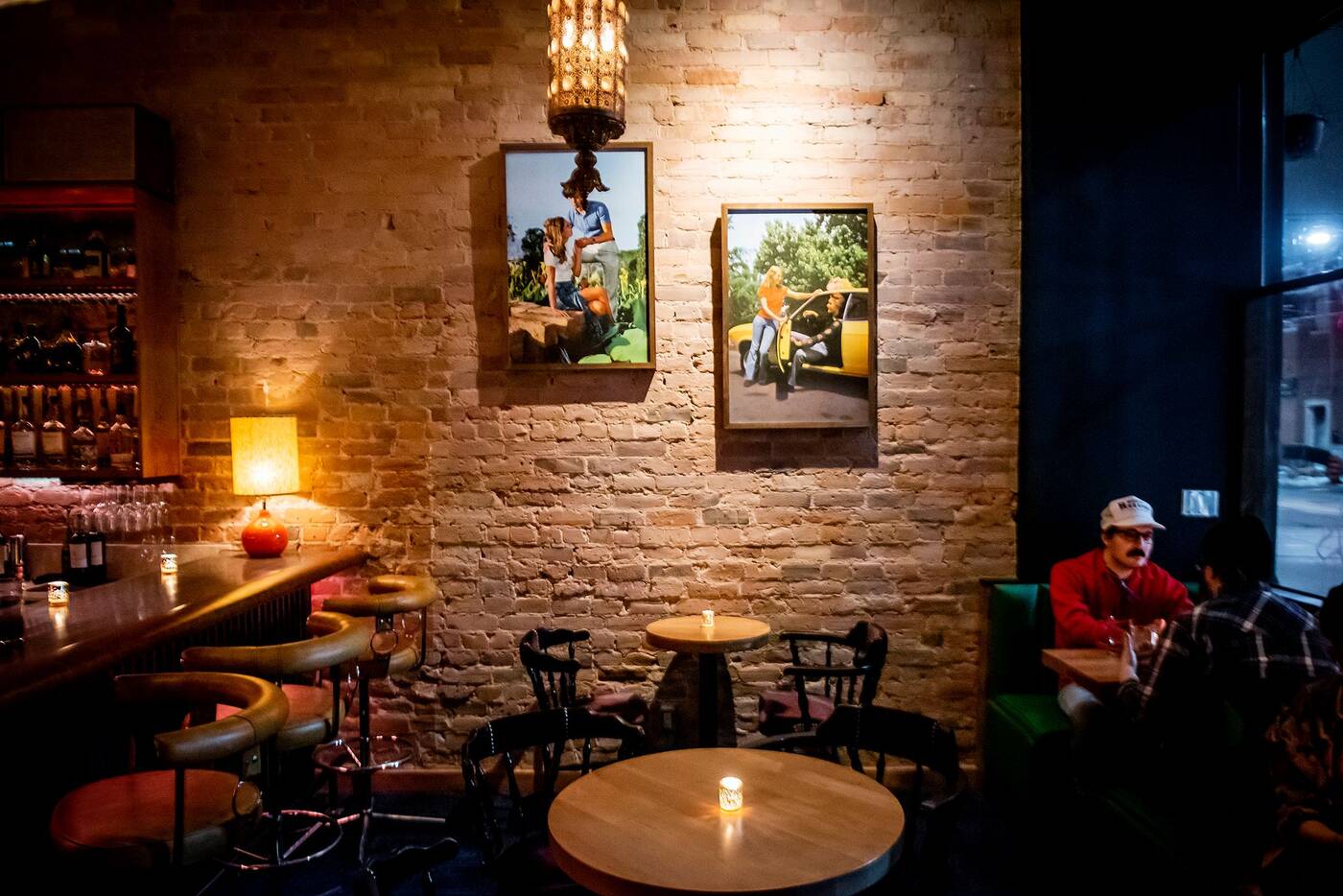 On a wall near the bar are two portraits of couples from the 1960's, they're blown up postcards that Emery bought 30 years ago when he went to Morocco. 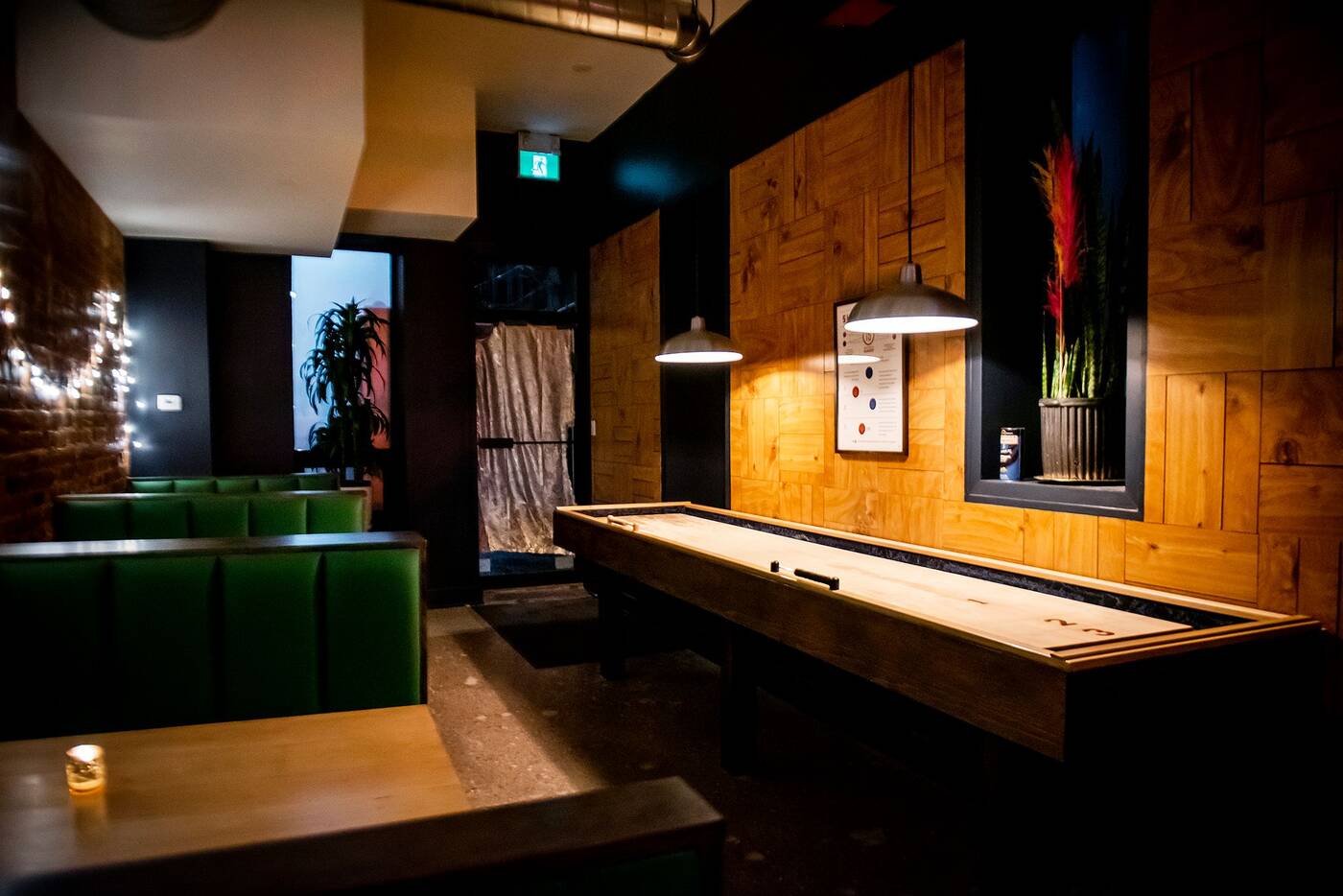 The 222 is a perfect date night spot, when you want to impress on the first night, but not go over the top. There's a shuffleboard in the back if you want to switch up conversation from sitting down and drinking. 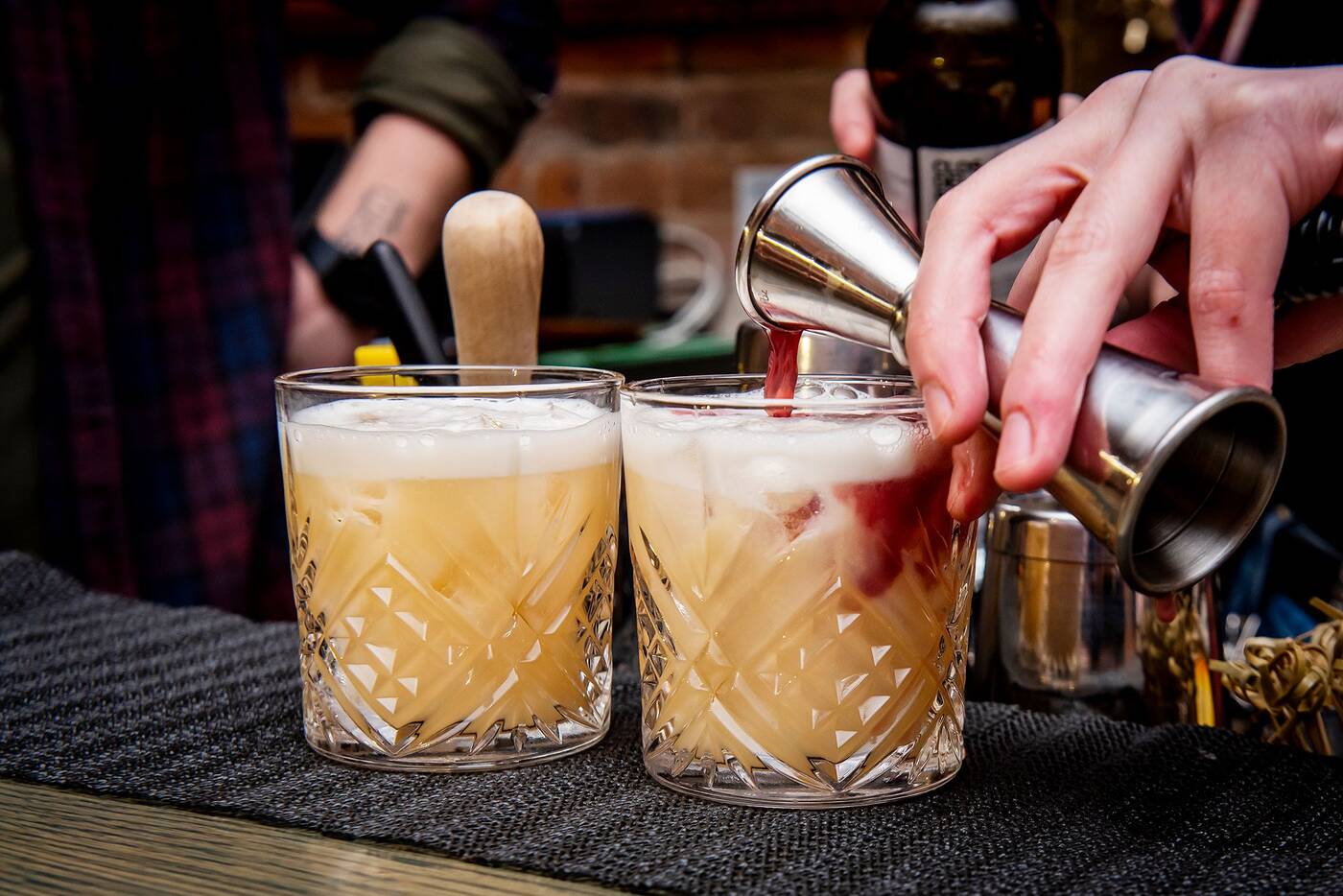 The new bar has been a valuable addition to Lower Ossington, where most dinner spots on the street close early. The 222 stays open till late for those who work in the service industry in the area and want a drink after their shift. 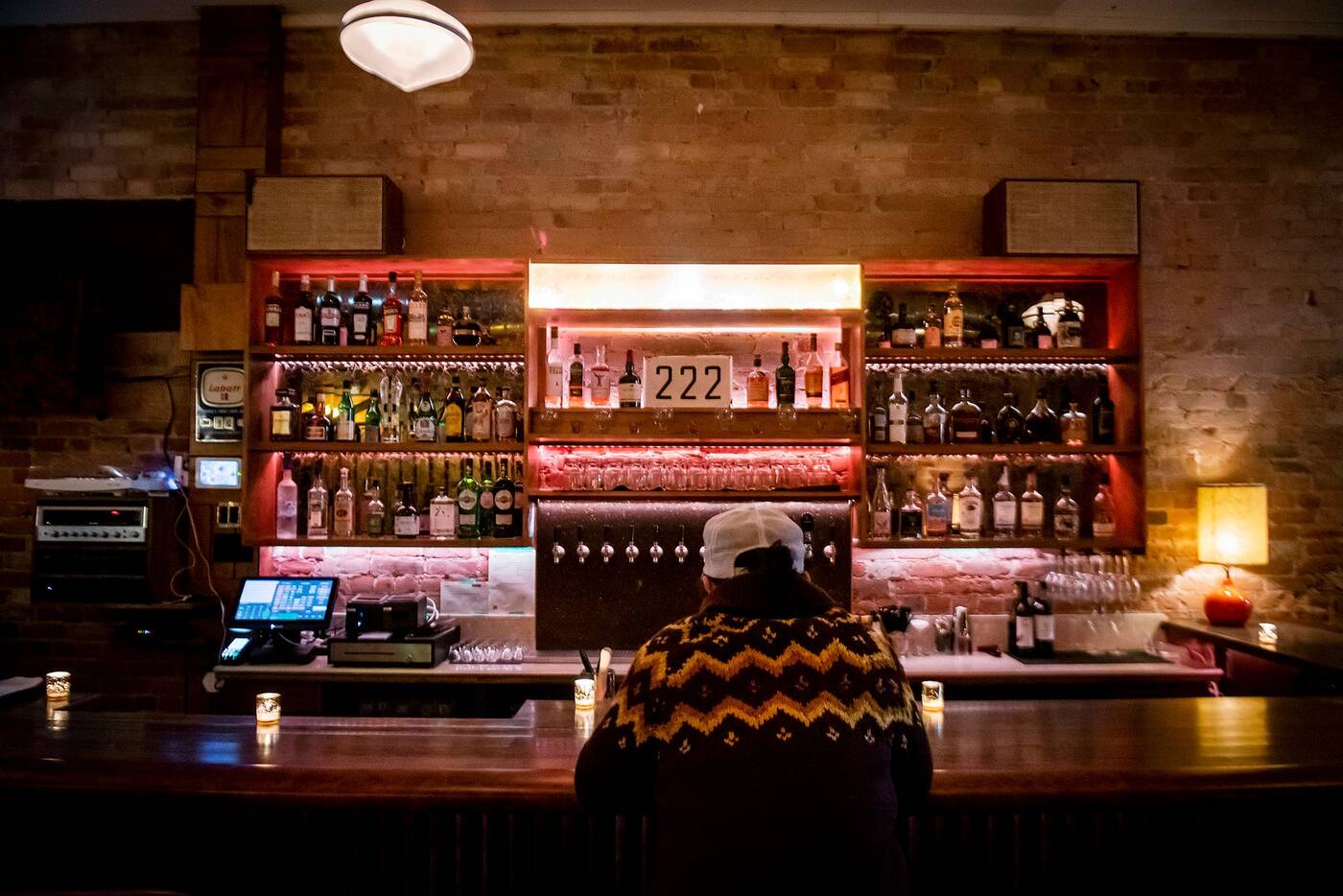 You won't spend a lot of time running through the 222's drink menu, it's compact with offerings of beer, premium liquors and house cocktails. 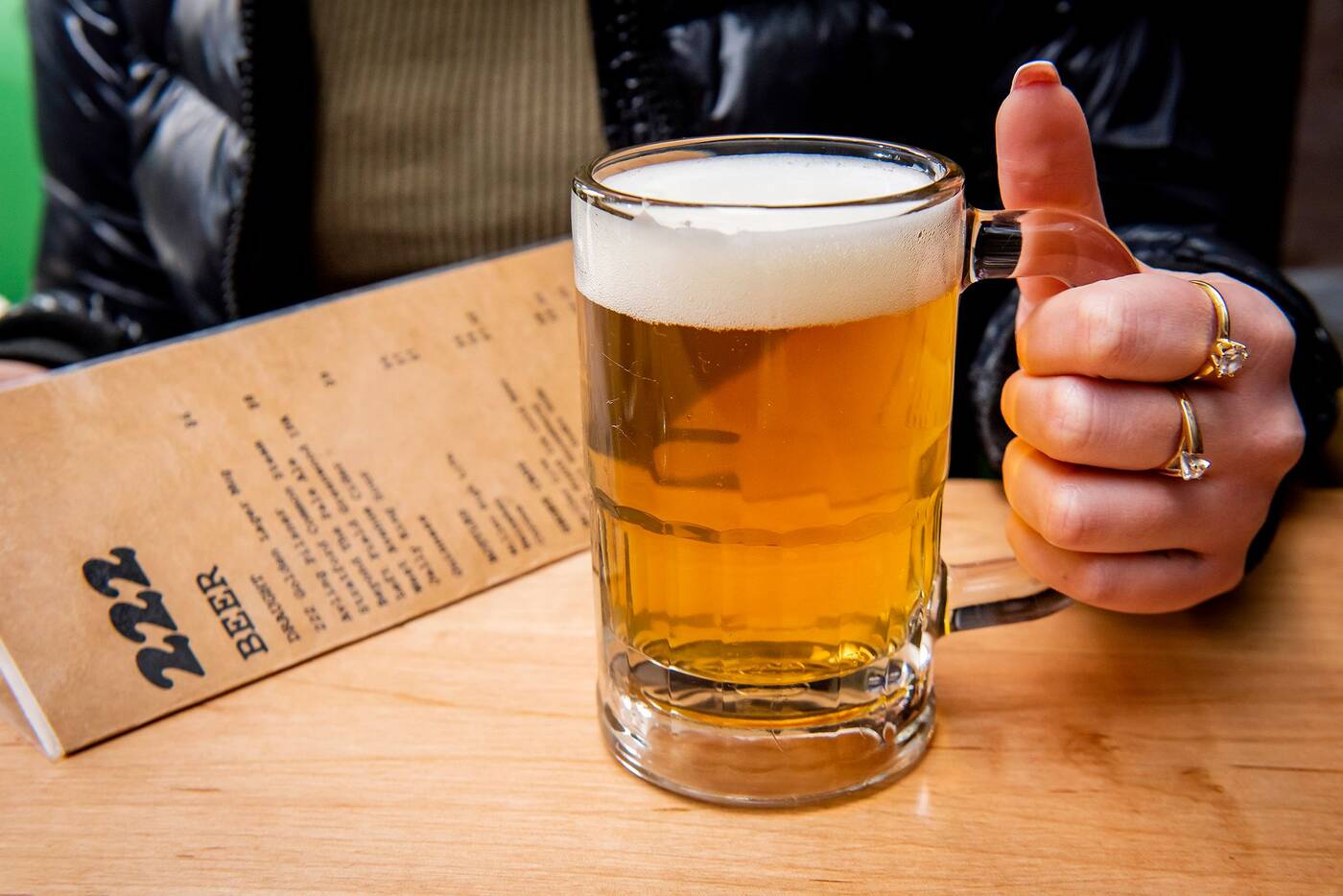 They've got a $6.00 lager deal every night of the week, you'll get a freshly poured 12 ounce mug of Great Lakes beer. They've also got shots of Jameson, Jager and Fireball for the same price. 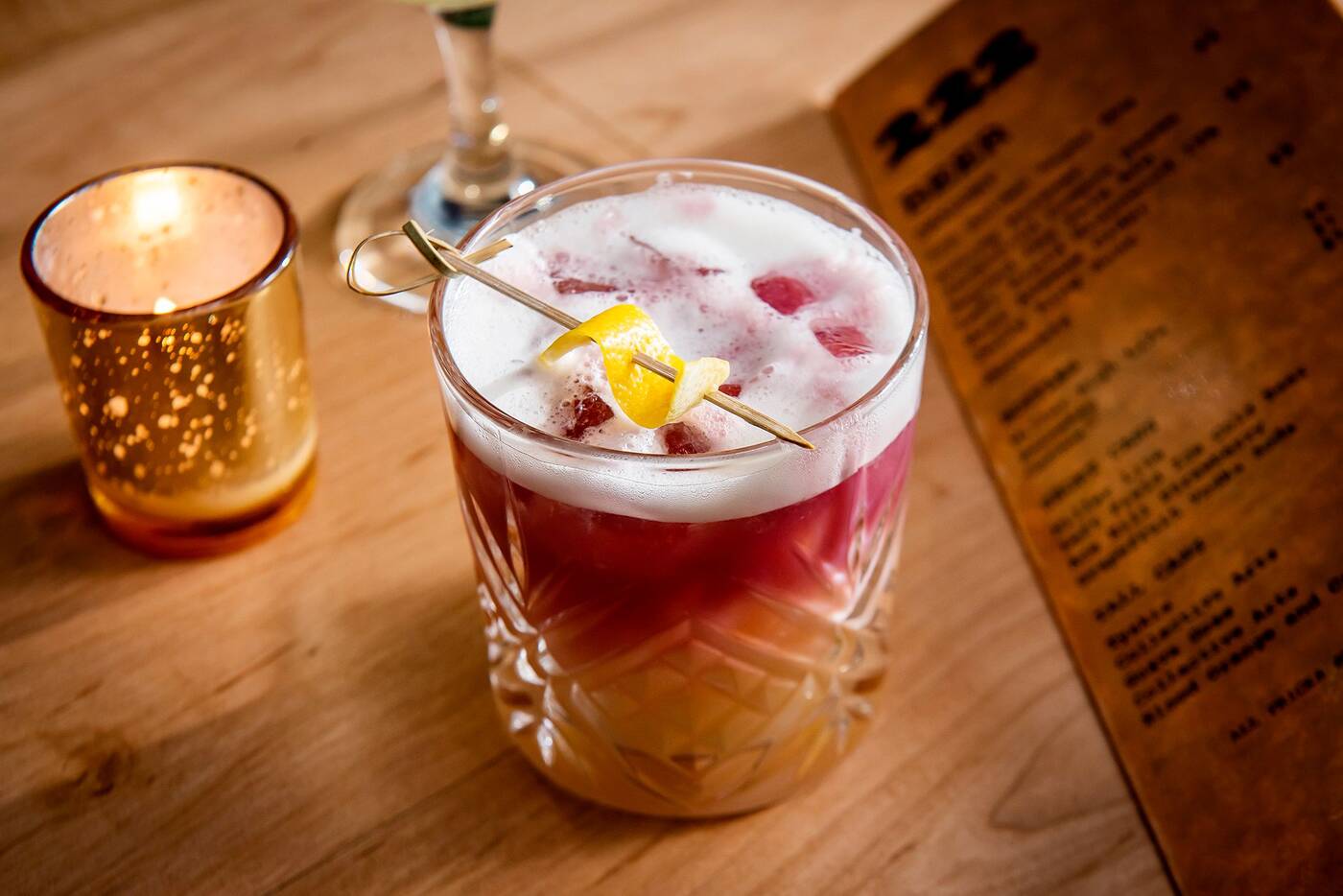 The New York Sour ($15.00) is like an old-fashioned version of a bourbon sour. It combines black currant liqueur, bourbon, and is topped with a red wine float that sits underneath a foamy layer of egg whites. 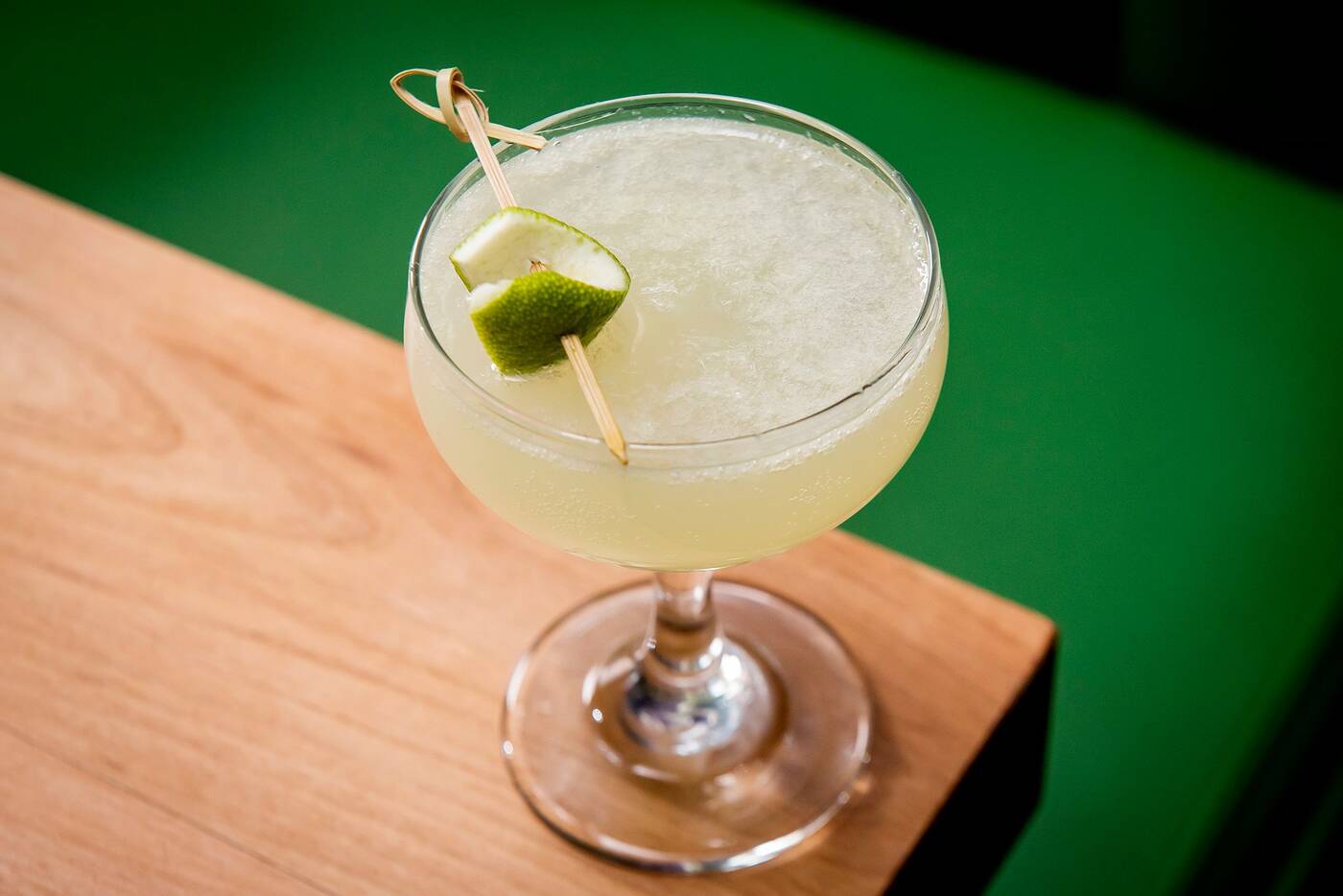 The Emerald of Ossington ($15.00) is herb-dominant in taste, gin is shaken with St. Germain Elderflower liqueur, and Green Chartreuse which gives this drink its stunning sage colour. 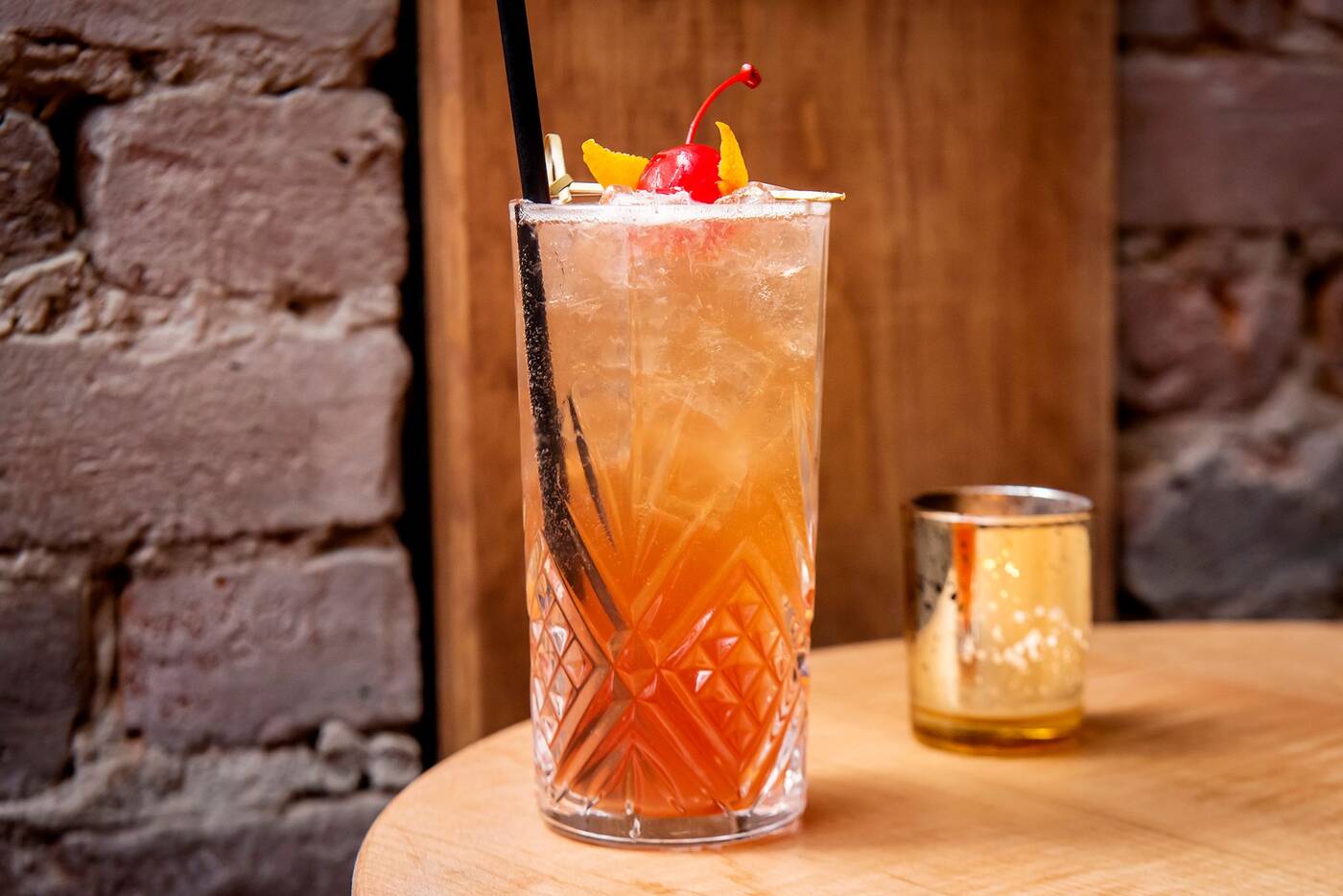 The Bautista ($15.00) is the last house cocktail on the menu. Refreshing and sweet, this drink combines spiced rum, with lemon juice, and topped with West Avenue Cider, adding a sparkling touch. 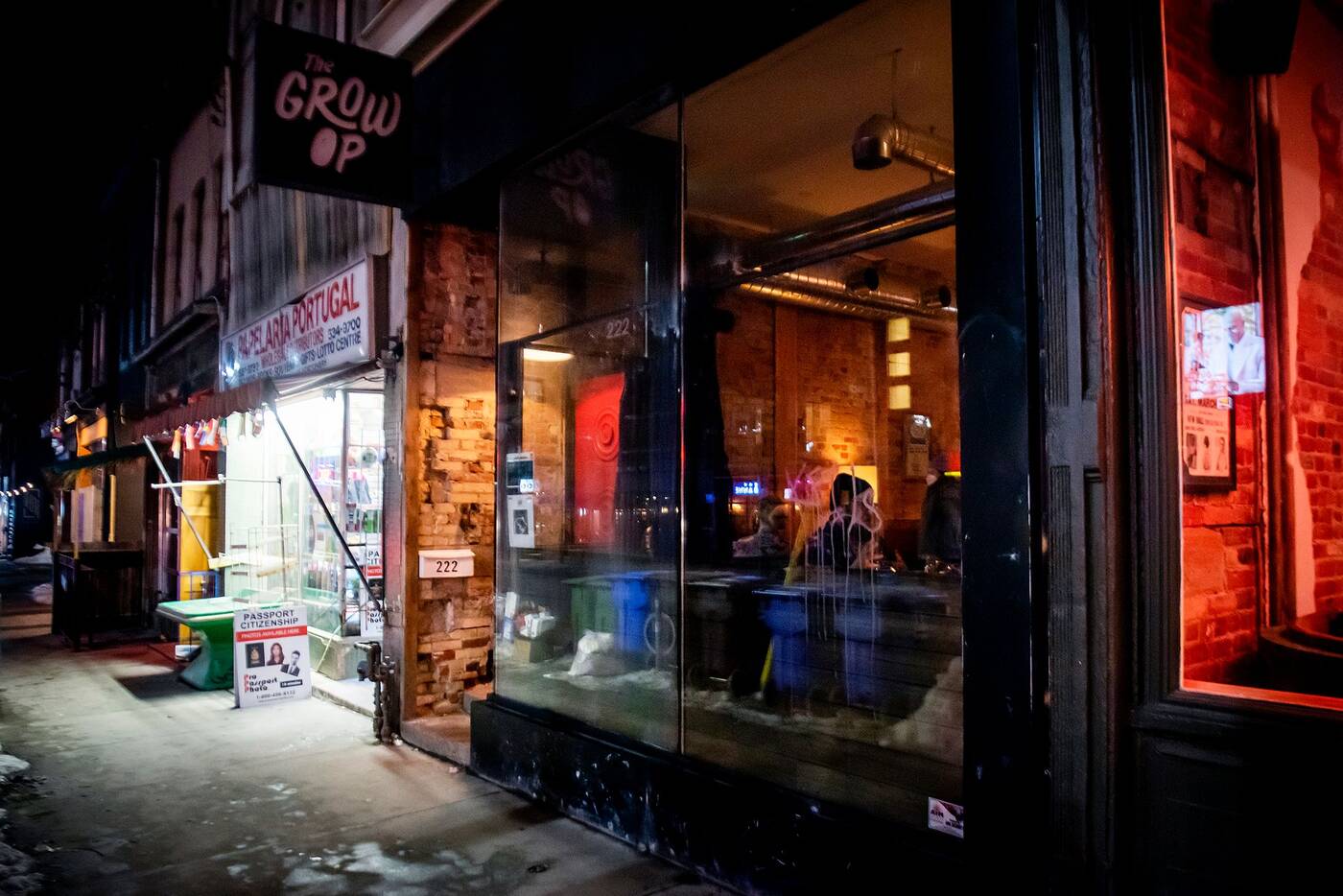 The bar which is near the corner of Dundas and Ossington, always puts a record in the window, they spin a different one every night at 11 p.m..

The Best New Bars in Toronto for 2022