The Grow Op probably isn't what you may first assume it to be upon hearing its name; it doesn't sell special brownies (you know which ones I mean) - instead, this juice bar and eatery on Ossington at Dundas promotes getting high on fruits and vegetables (as indicated by the cute fruit art by local graffiti artist Skam on the walls).

Formerly a longtime Portuguese fish shop that Grow Op-owner Jose Rodriguez believes was around for about 65 years - "it took four months to get the fish smell out," he tells me - this place now serves smoothies, cold-pressed juices, salads, sandwiches and other healthy fare. 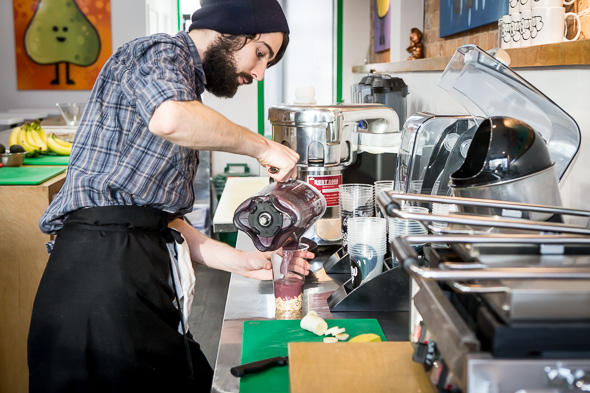 Rodriguez used to work a lot of late nights; his background is in nightclubs (he managed talent booking and event planning at The Guvernment), and after 15 years in that biz, he wanted to get his health back on track. He tells me he's now created his own "smoothie" out of music, art and food here. 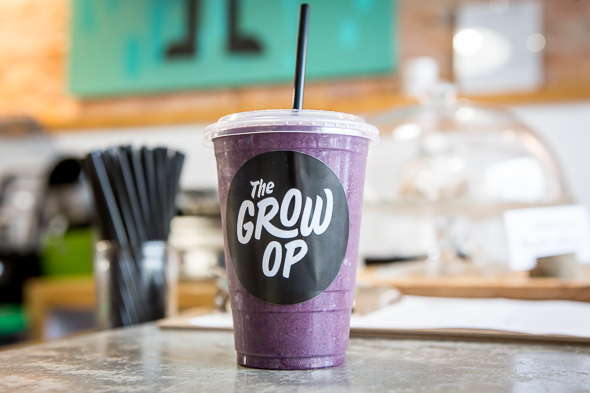 Like Rodriguez's own diet, everything at The Grow Op is vegetarian, and can be made vegan if requested. While The Grow Op isn't a grow-op, fresh-pressed hemp milk is used as the base for a lot of the 16oz smoothies on the menu, like the #7 ($9.50) - one of the go-tos Rodriguez calls the "Big Mac" of smoothies.

It contains a blend of blueberries, banana, vanilla hemp milk, maple syrup, bee pollen and coconut oil, and it's easy to taste why it's so popular; it's a pleasant, not-too-sweet combo of flavours that complement each other perfectly. Spirulina, organic pressed hemp oil or protein can be added to anything for an extra $2 each. 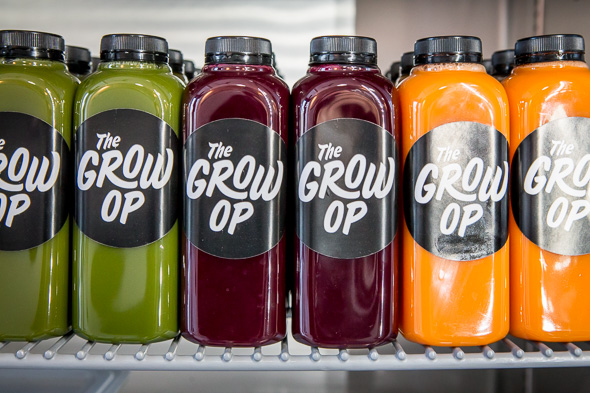 Cold-pressed juices ($8-$9.50/16oz) made in the basement "lab" include intriguing mixes like 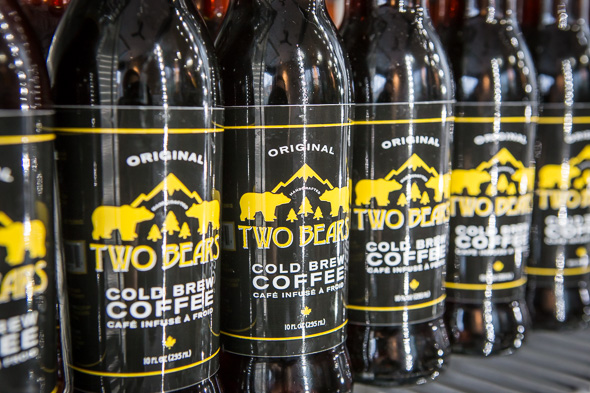 maple water are some of the other locally made beverages on offer, along with some of the best flavoured kombucha on tap ($5.50/16oz) I've ever tried. Rodriguez has a brewmaster make it for the shop, and unlike some others I've sampled, it's not too vinegary. 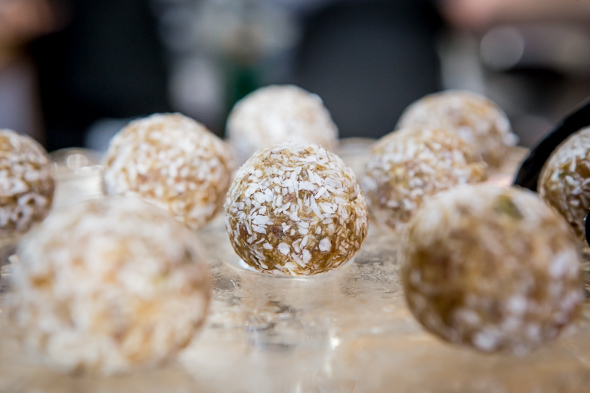 Eats-wise, there are smaller bites like the made-in-house all-natural power balls ($2.50 each) as well as açaí bowls, which are pretty much the perfect breakfast. I first encountered antioxidant-rich açaí when visiting Rio de Janeiro (it's almost impossible not to see it in Brazil), and I'm glad it's become more prominent in Toronto juice bars these past few years. 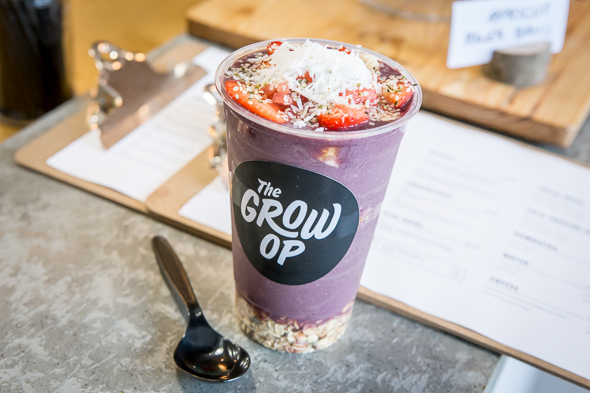 Here, the "bowl" is actually a 24oz cup, and the refreshing version we try ($9) comprises açaí berries blended with fresh-pressed hemp milk, maple syrup and blueberries mixed in with banana, strawberries, granola and hemp seeds topped with shredded coconut (definitely use a spoon to eat this). Rodriguez tells me another version contains peanut butter (yum). 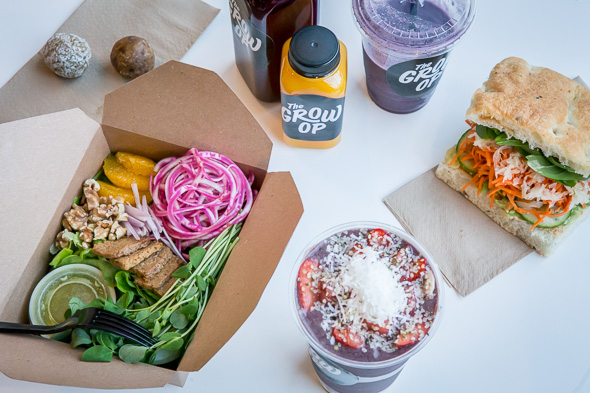 There are also salads and sandwiches that are all assembled on the premises. Salad #2 ($9) is a vibrant, colourful composition of spring greens, candy cane beets, avocado, orange, shallots, mint, sprouts, walnuts and a very tasty cooked chickpea tempeh (for protein) with a ginger-mint dressing. 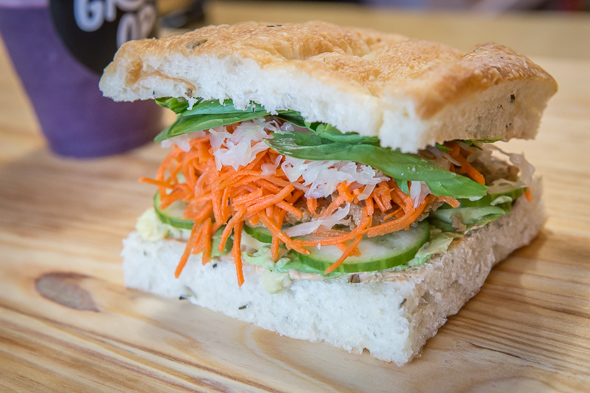 As is expected these days, Rodriguez tries to use as much local, non-GMO produce as possible. For the pressed sandwiches ($8 each), focaccia (that can also be made vegan) from OMG Baked Goodness is used to hold fillings like avocado, spinach, sauerkraut and more of that flavourful chickpea tempeh. 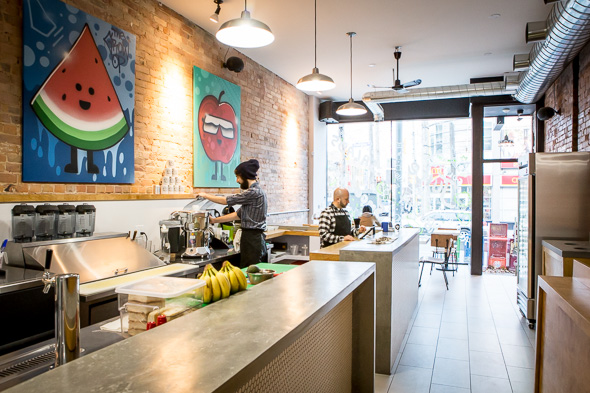 Surprisingly, while there are tons of great places to eat and drink in this area, there aren't very many other healthy, specifically vegetarian options in the vicinity (only Veghed comes to mind), so this should be a welcome addition to the 'hood. 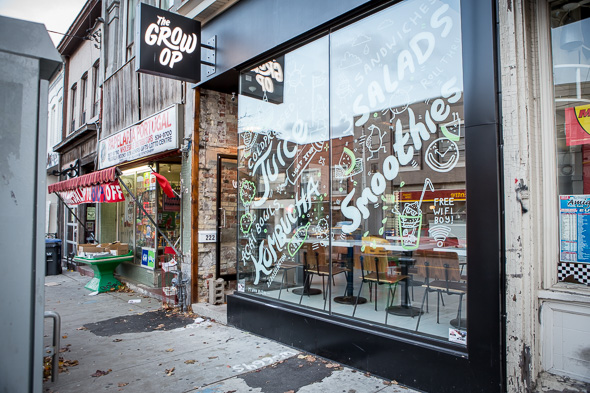