Like many of the stores on Dundas between Yonge and University, One Pear has very limited seating (just seven spots) operating where a Cafe de Paris location once stood. 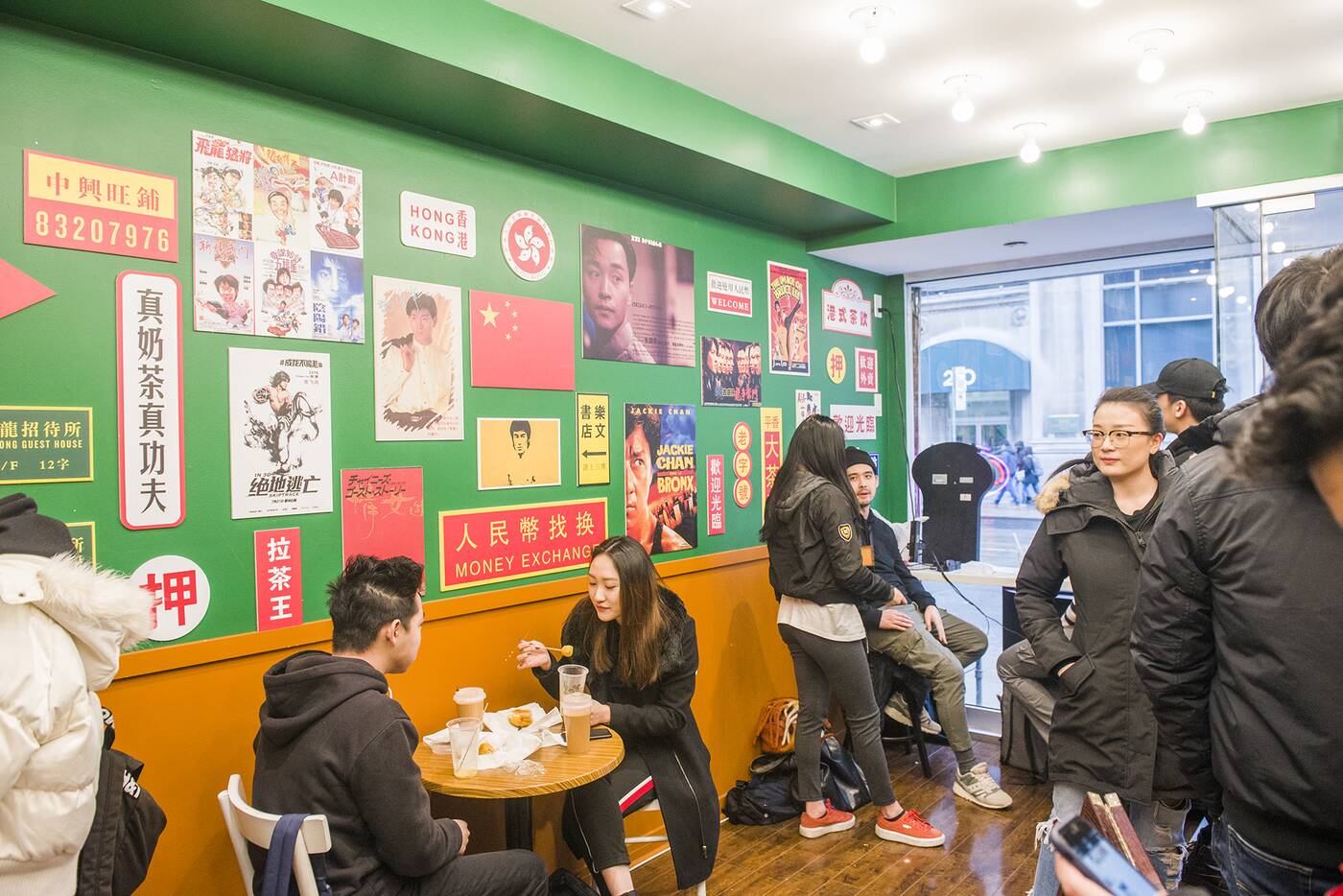 Hailing from the southeastern Chinese province of Fujian, One Pear's owner Mark Shen is just 20 years-old. His reason for starting the cafe was to bring beverages of the Hong Kong variety to an area inundated with Taiwanese bubble tea. 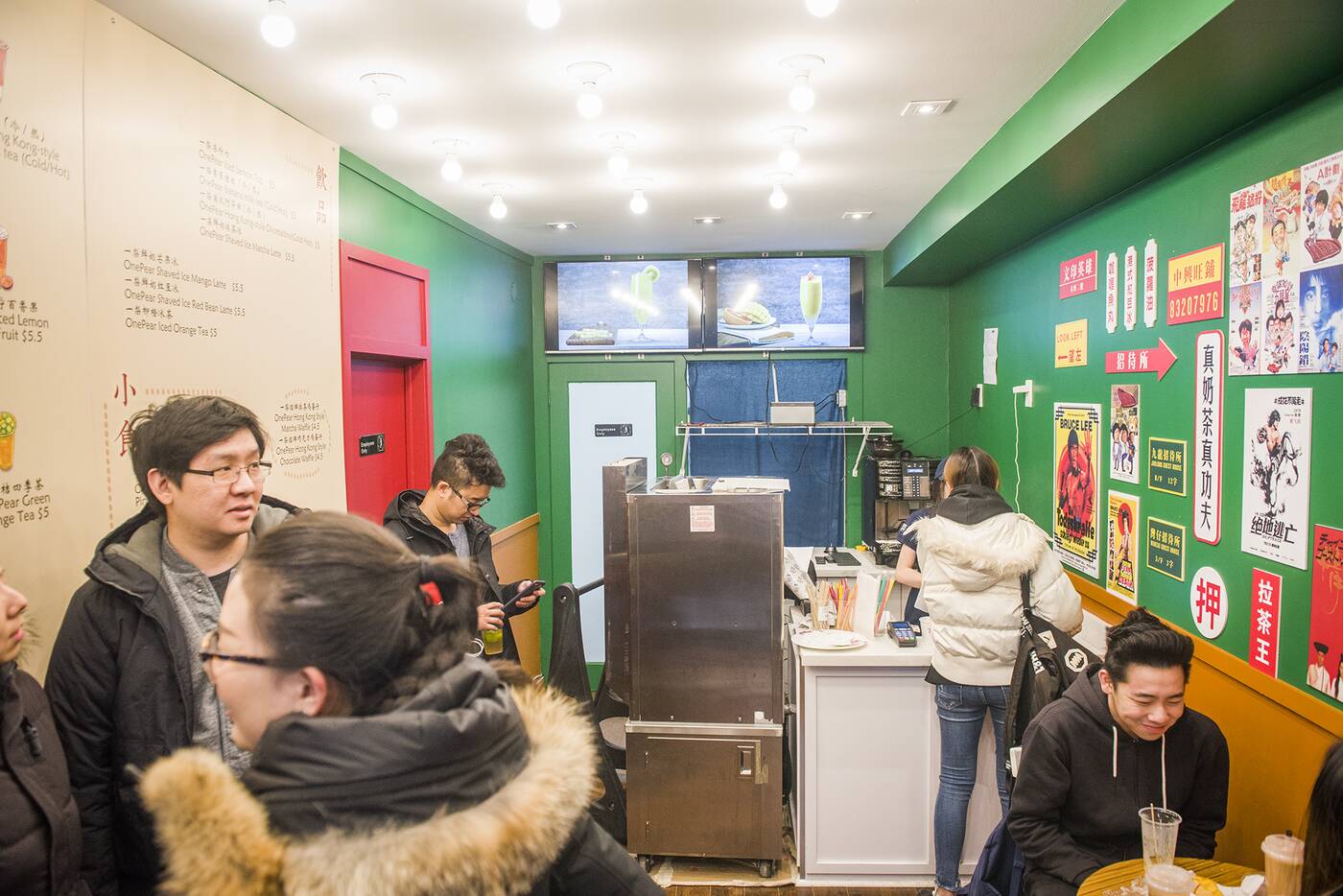 What that means: no powdered milk, and fresher black tea, he says. While the menu is small right now, Shen plans to adjust the offerings as the cafe gathers more customer feedback. 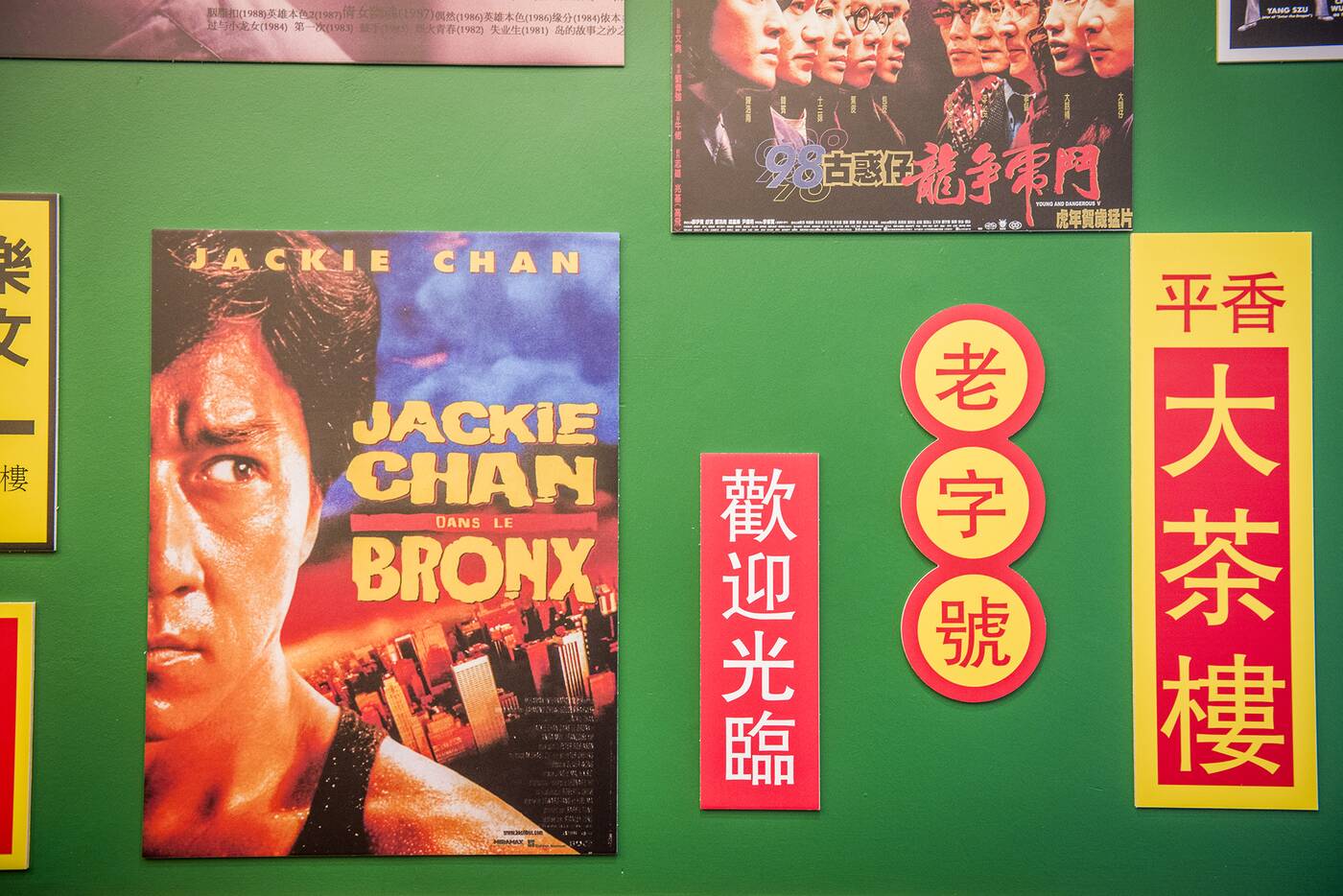 There's not much going on in terms of furniture in the cafe, but a green wall to the right of the entrance is decorated with old school posters of classic Chinese cinema (Rumble In The Bronx, iconic), bringing life to the sparse space. 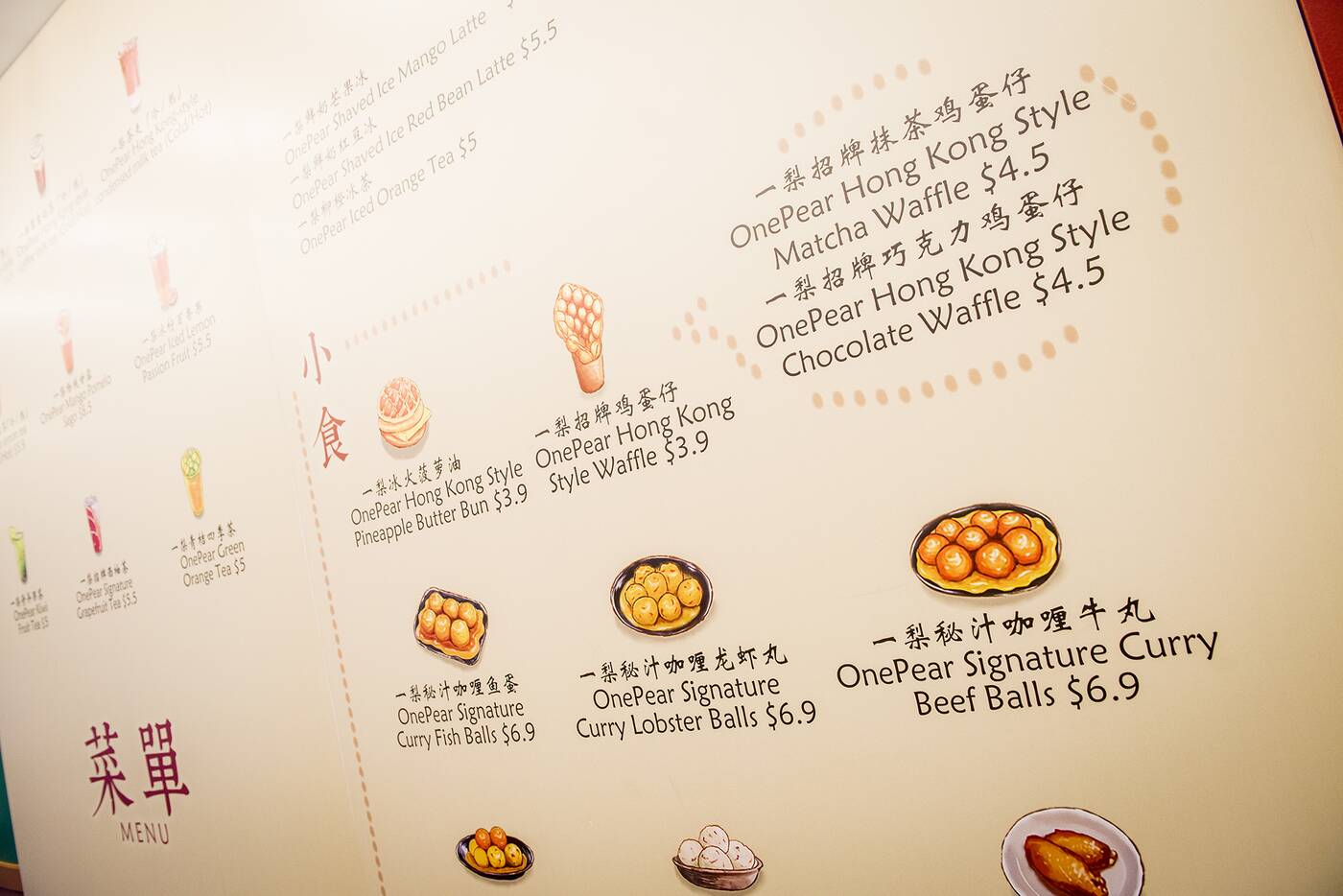 To the left, One Pears's menu takes up an entire wall. On it is a list of teas, shaved ice lattes, and Hong Kong-style snacks. 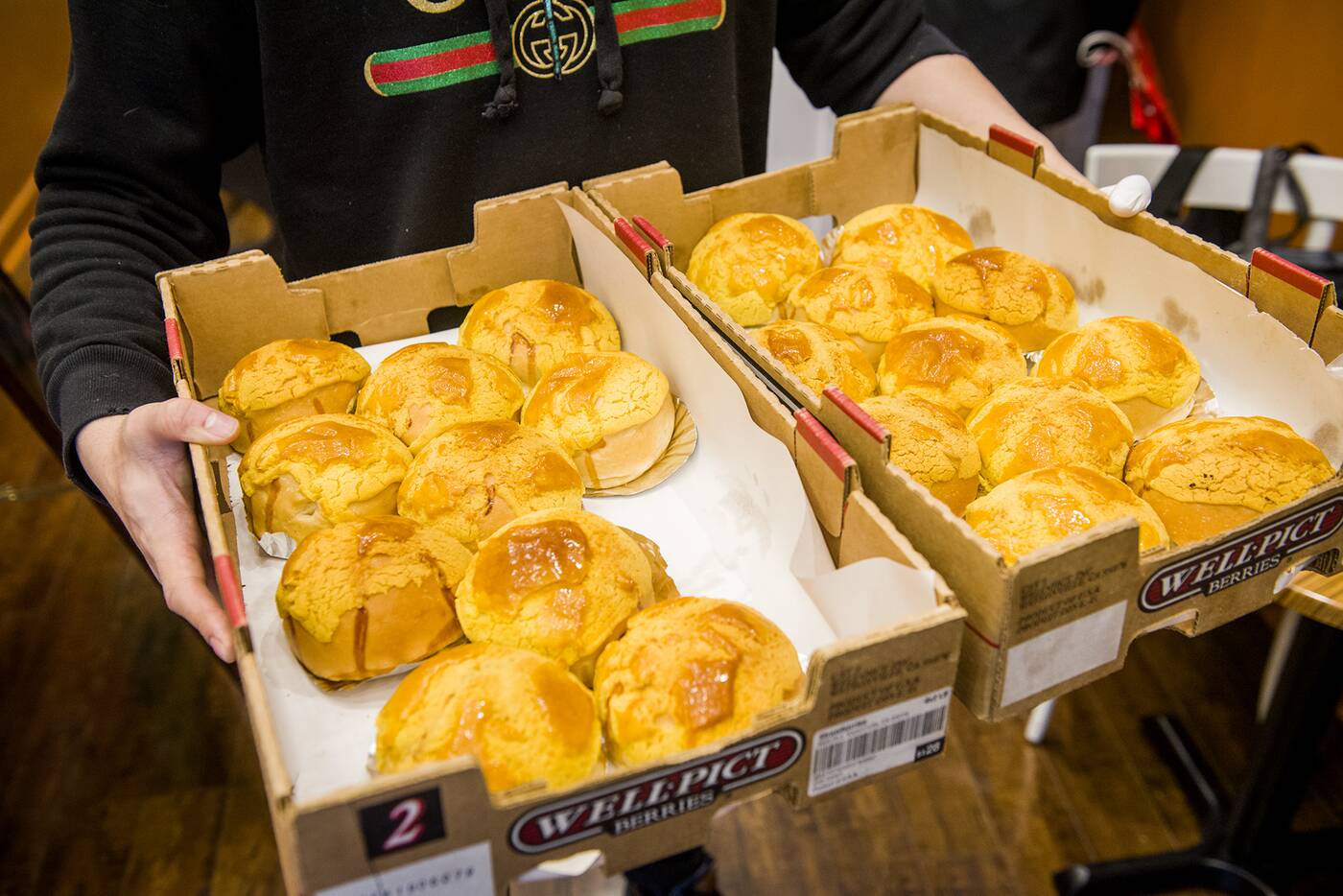 The main draw here is the pineapple butter bun ($3.90). For those who have never tried this popular Chinese invention, these buns may appear overly buttery - obscenely so. 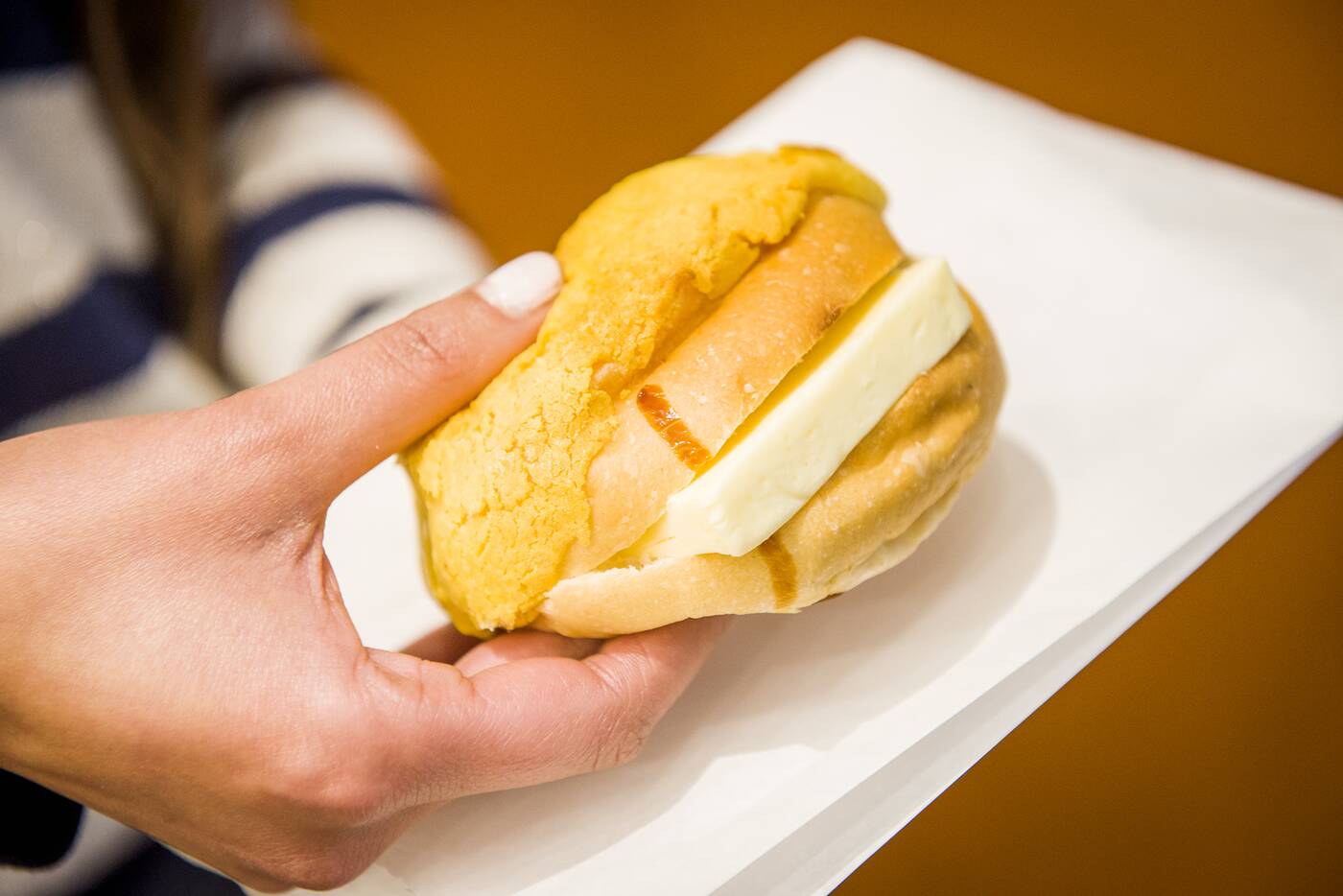 No, that's not cheese, it's butter.

As someone who grew up eating these occasionally, I still get visual shell shock looking at them. But I promise that biting into one of these hand-sized slabs of inch-thick butter is one of the most surprisingly delicious, YOLO-esque experiences you'll ever have. 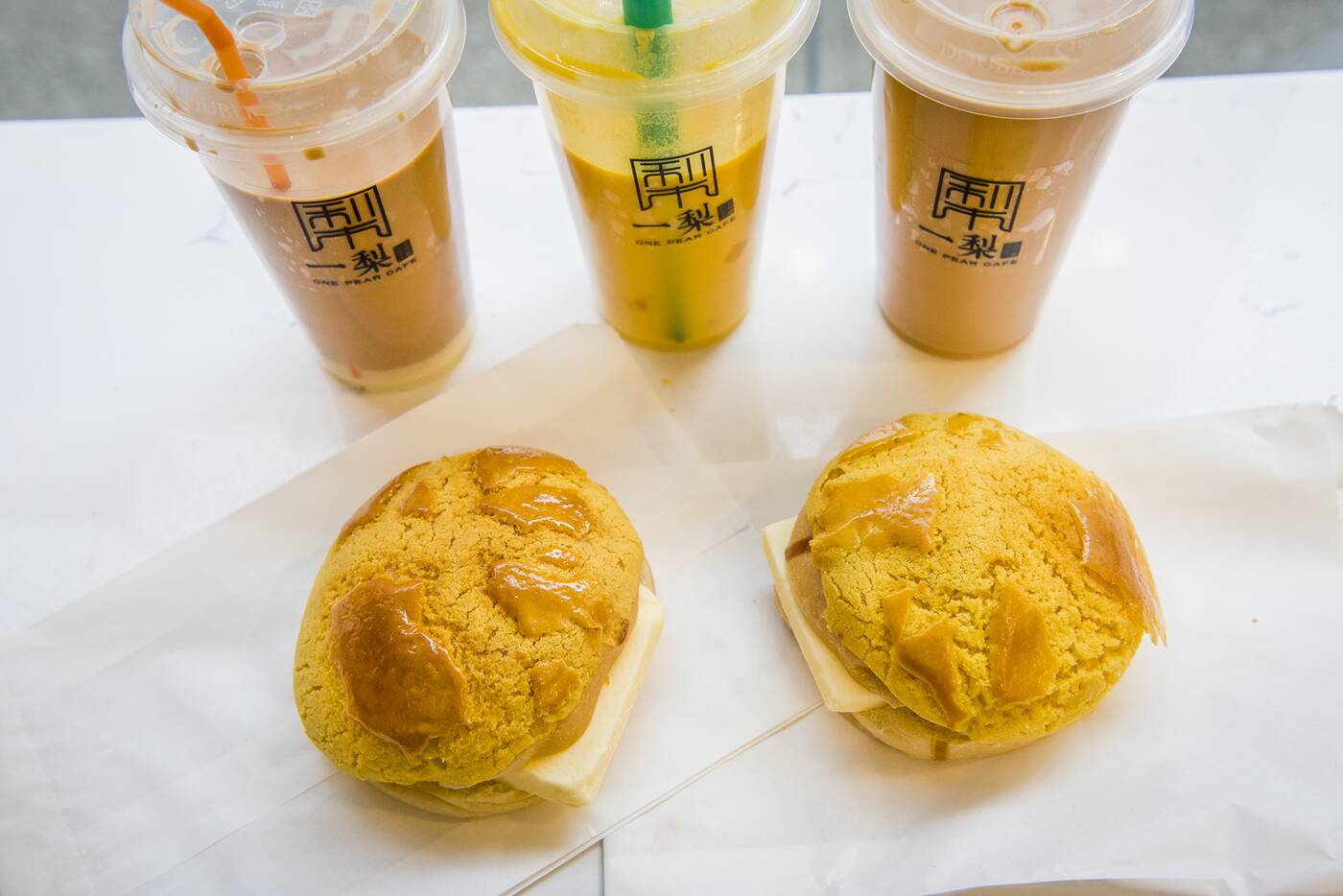 Pineapple butter buns are a common snack in Hong Kong that get their name from their crusted surfaces, which are designed to (somewhat) resemble the outer pattern of pineapples. The 'pineapple' is only a visual representation; there's no actual fruity flavour here.

Slightly crispy on the outside but soft on the side, One Pear's buns come from a bakery in Markham. Sandwiched in each order is a slab of unsalted butter that's cut from frozen to achieve a slow melting process inside the freshly heated slices of bread. 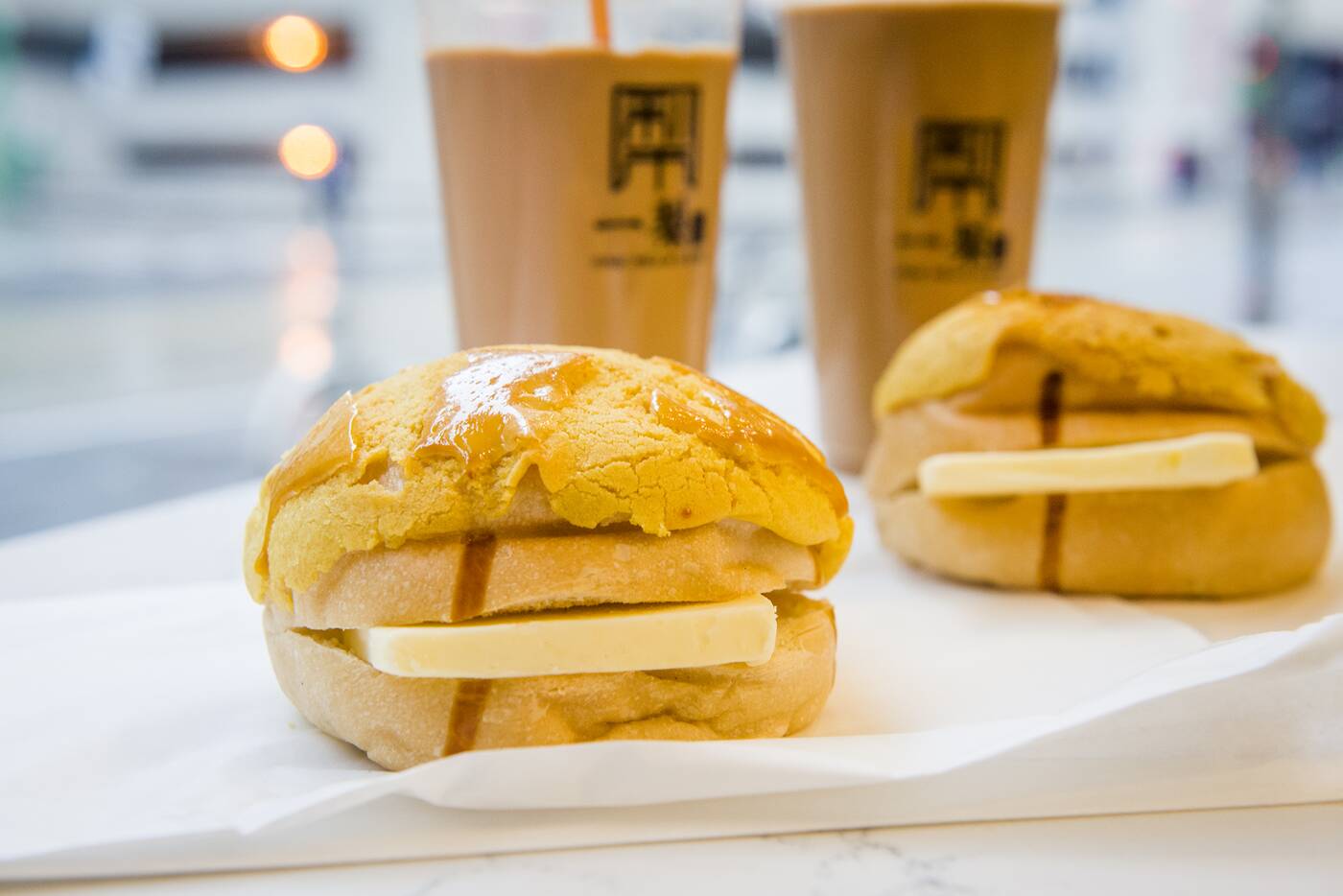 The effect: a delicious - albeit artery-clogging - snack. If the idea of biting into a thick hunk of butter horrifies you, you can always request a smaller slice - just keep in mind they're already way thinner than the ones they eat in Hong Kong. 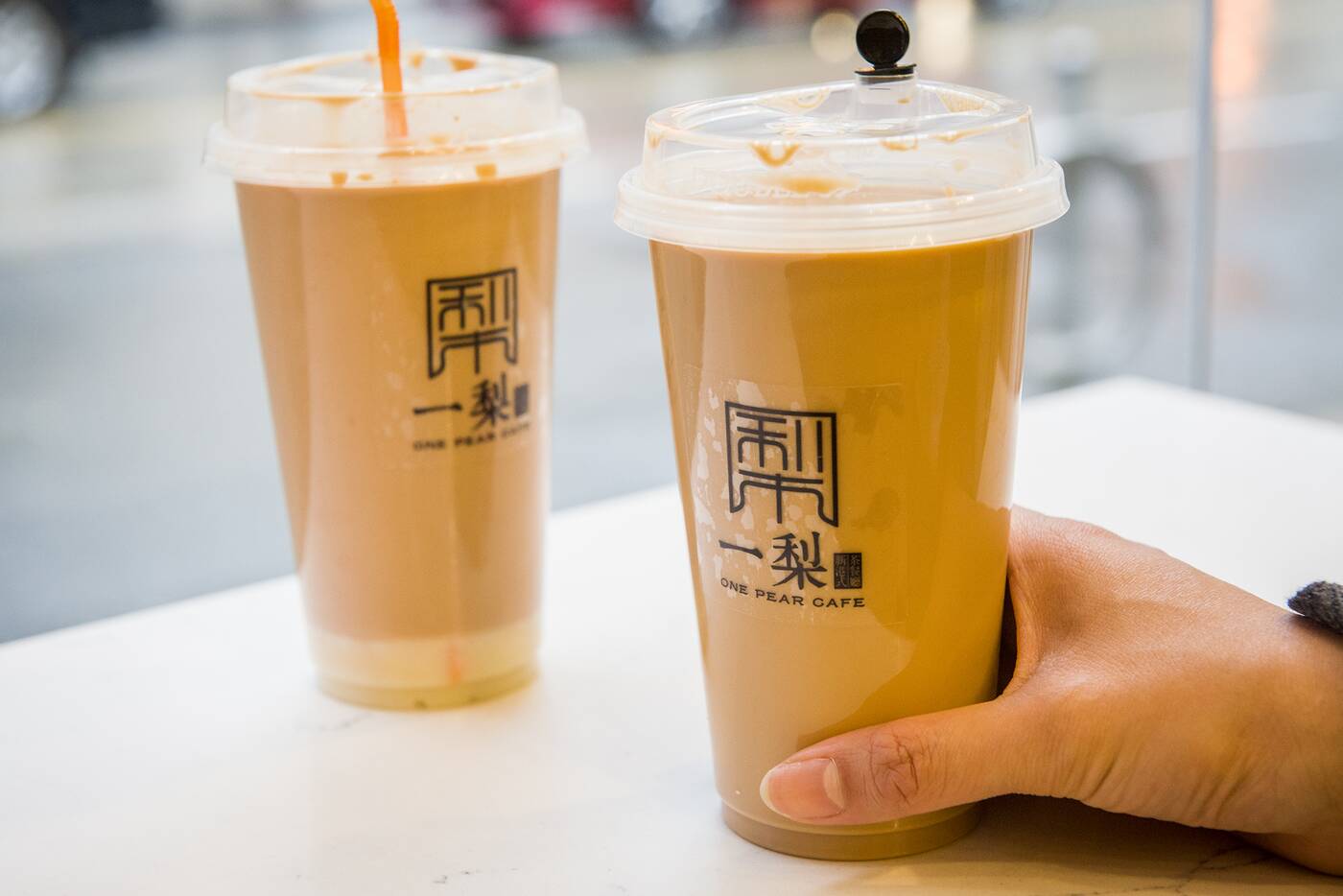 One Pear has three options of milk teas: traditional, mixed with coffee, or with a layer of condensed milk at the bottom - all $5.90 for hot or cold.

It's above average, cost-wise, but Shen's justification for the price is using a stronger-than-usual fermented oolong black tea, and evaporated milk instead of powdered.

All drinks here come in one size - around 550 millileters, the equivalent of a medium or large at other places. No drink fillers like tapioca or grass jelly are offered here, though Hong Kong-style milk tea usually doesn't come with that stuff anyway. 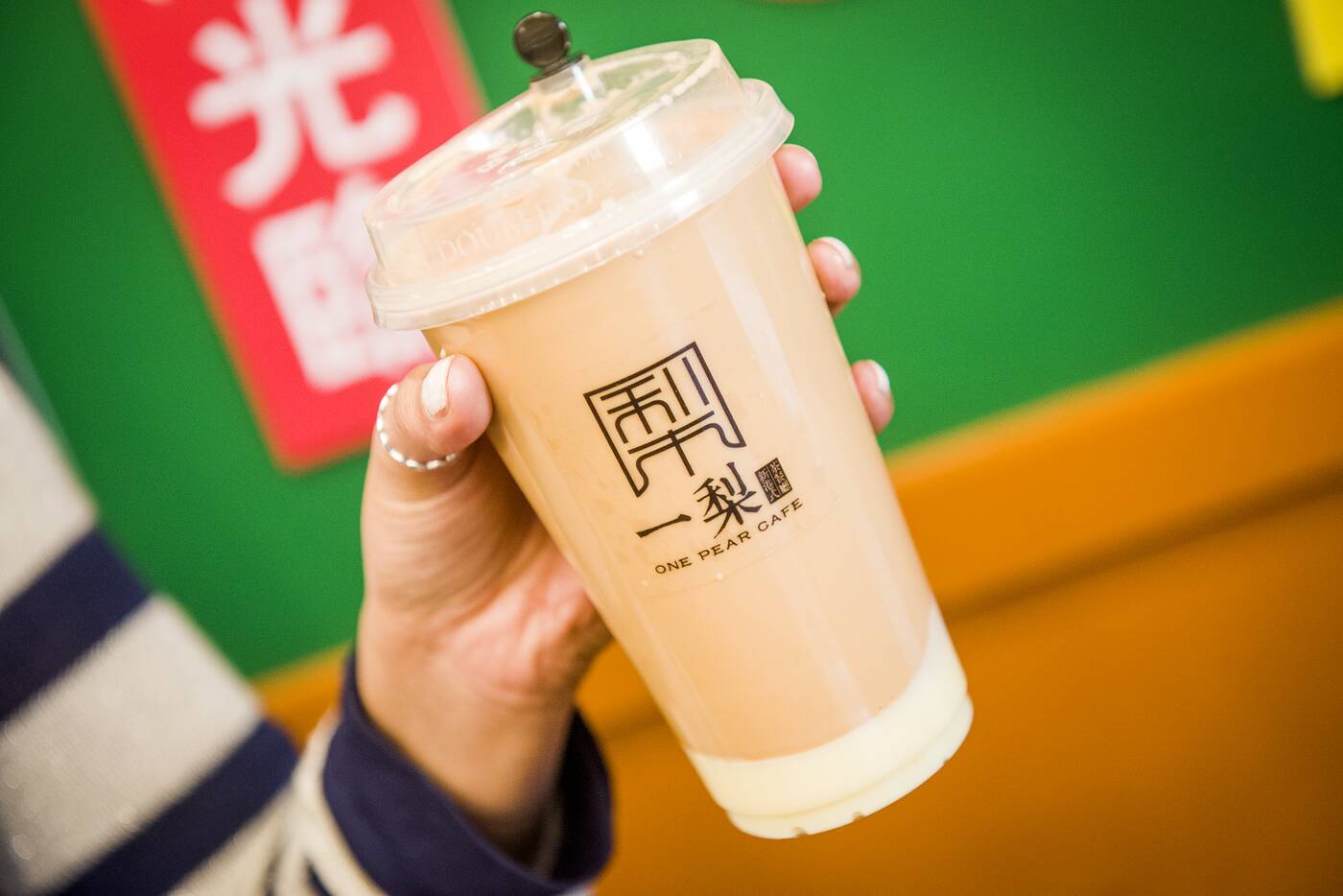 If you don't like your teas pre-mixed, it's a good idea to get the condensed milk option to better control the amount of sweetness in your drink. Just make sure to stir well. 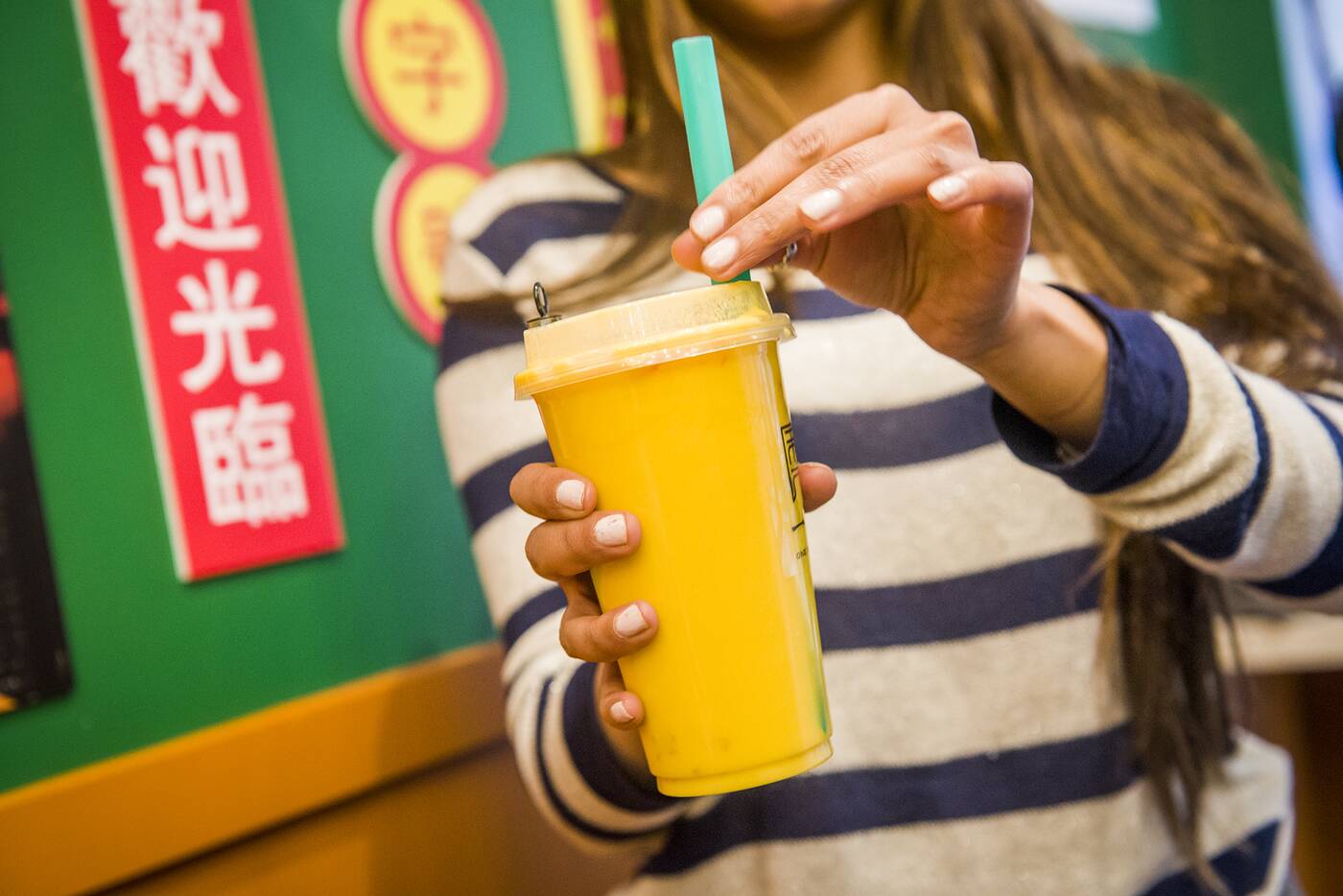 The mango pomelo sago ($6.50) is my favourite: a mixture of coconut cream, regular cream and evaporated milk mixed with chunks of mango make for a textured drink that could have been colder, but was tasty all around. 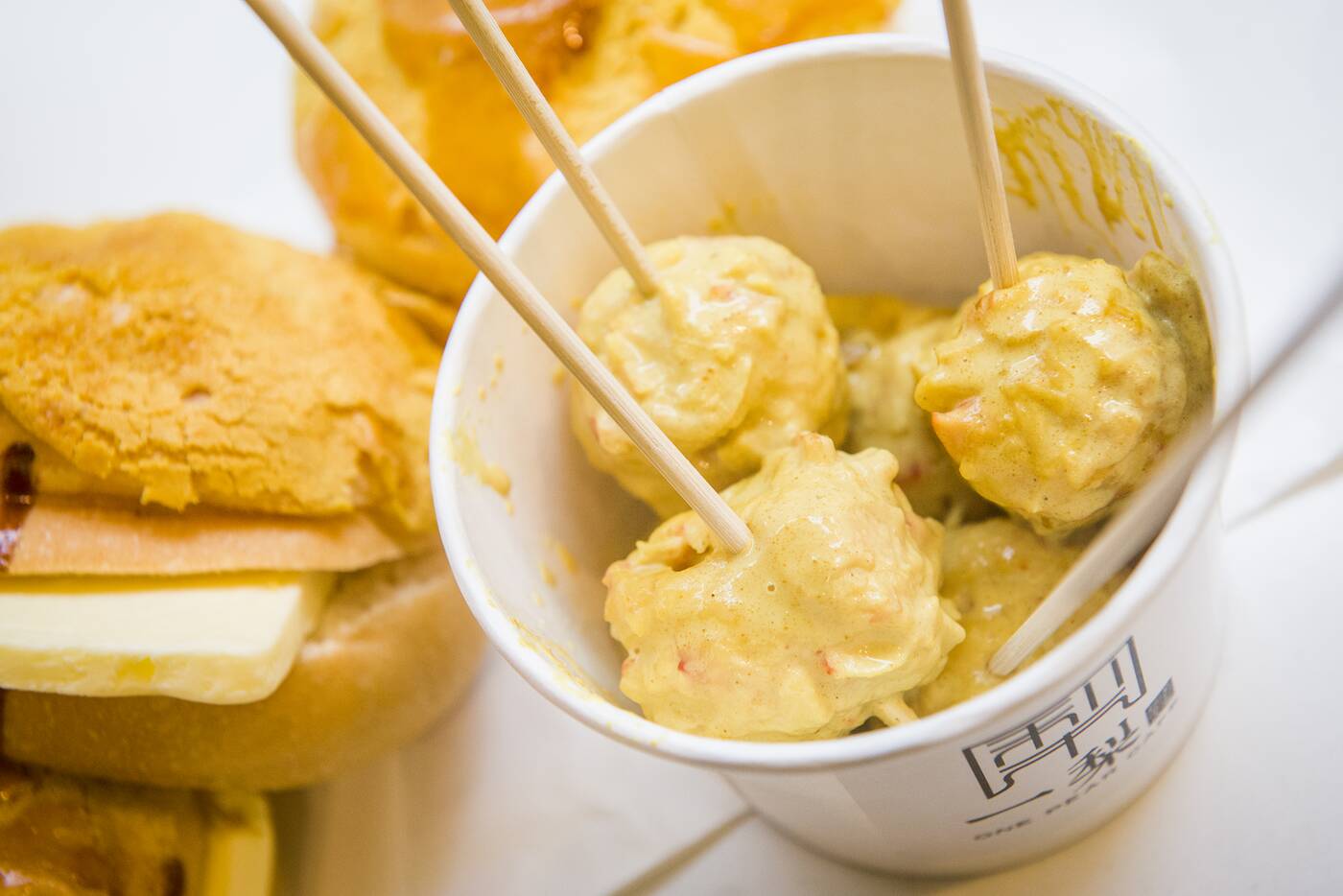 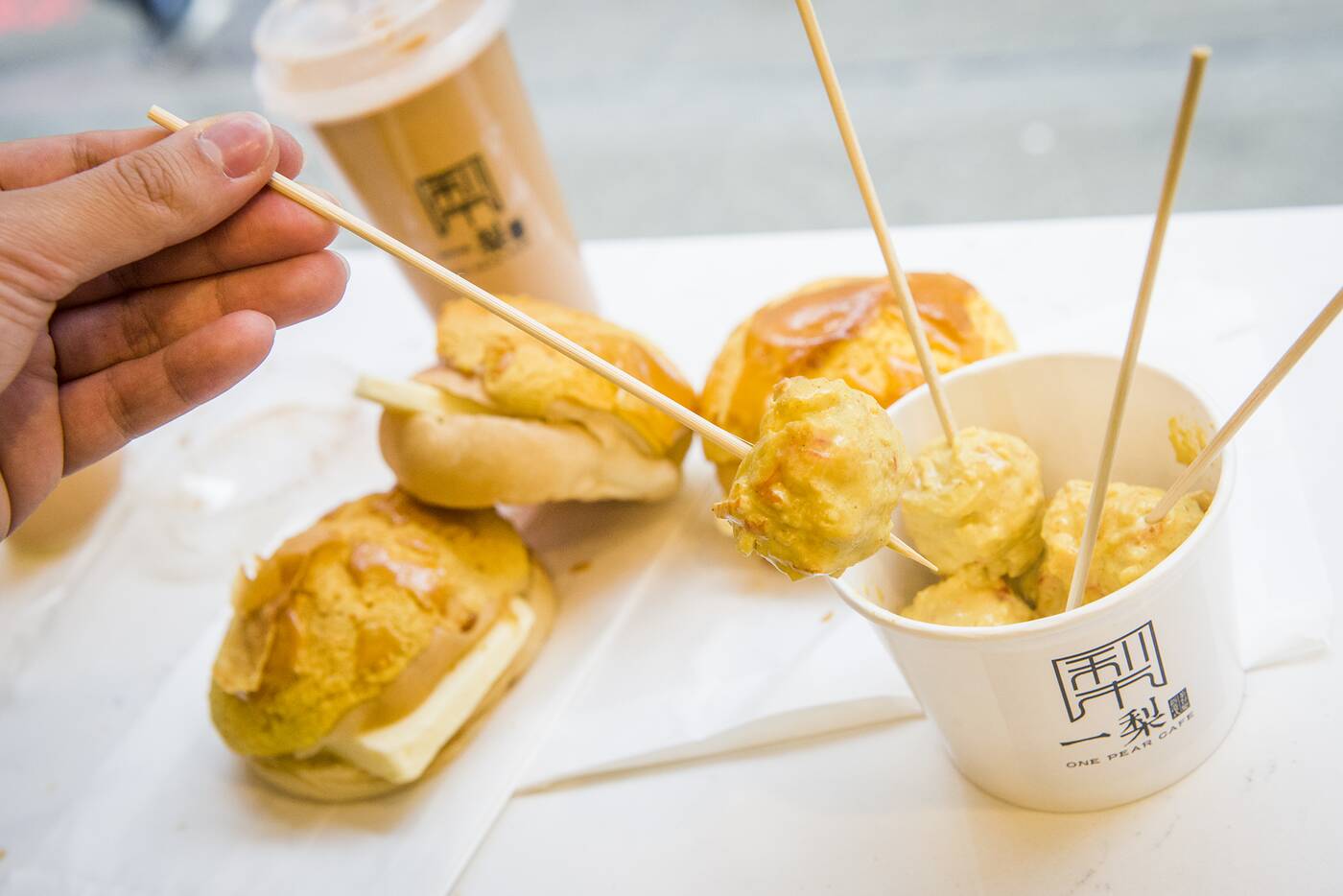 Don't expect any type of kick from these dishes: Hong Kong curry trends on the sweet side rather than the spicy, and while the balls have a good texture, the lobster flavour falls to the wayside. 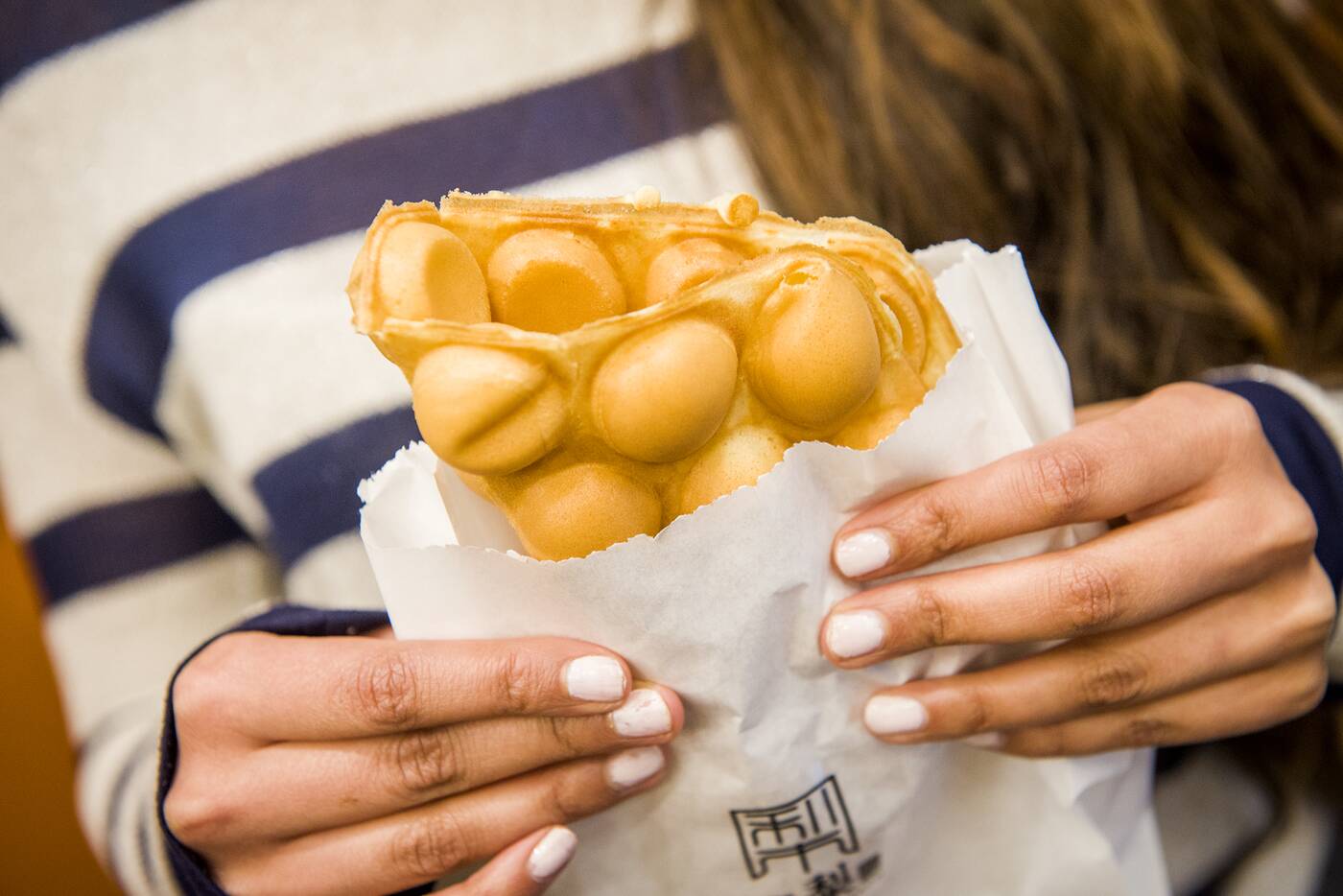 As for the classic Hong Kong-style waffles, these are soft and satisfying when served hot but fall short of spectacular: when it comes to the pineapple buns, these guys play second fiddle. 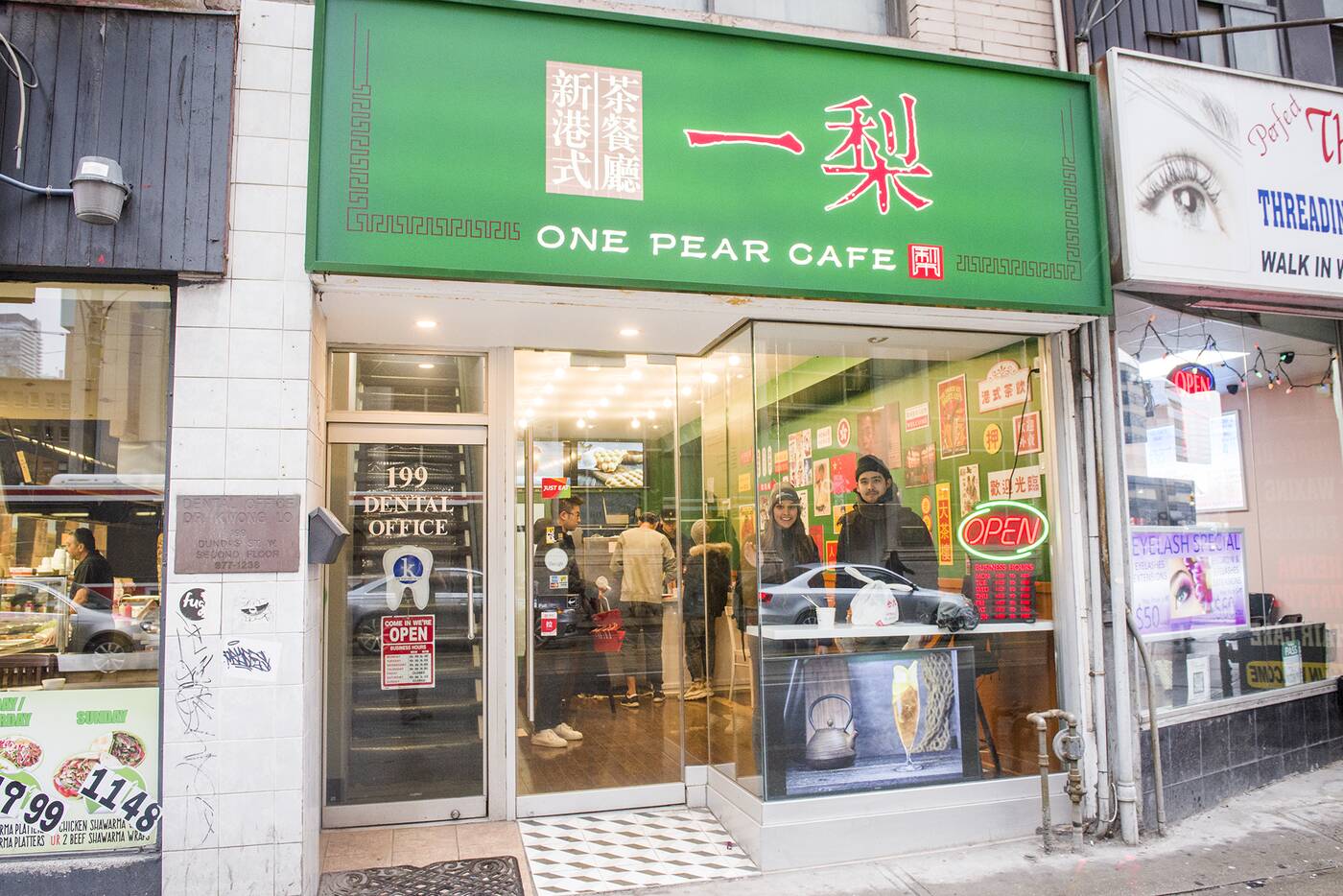