For The Love Of Cake opened in January by Adam Finlay and Genevieve Griffin. This Liberty Village newbie is a veritable shrine to the cupcake. Baking up to a dozen varieties daily, there's everything from classic Red Velvet to the more unexpected Japanese Ginger and Salted Caramel, yet my eye is immediately drawn to the mancakes display. Large cupcakes with the bold mission statement "to make cupcakes less girly by using man-worthy ingredients like beer, whiskey and bacon", they come in such chest beating flavors as Stout Spice, Guinness Chocolate (above) and patriotic Maple Bacon (all cupcakes and mancakes $3.00). 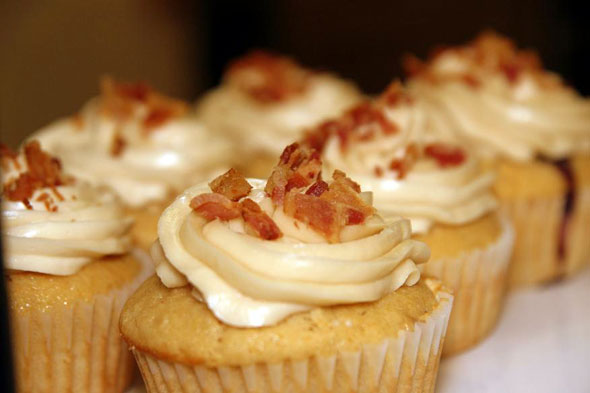 OK, fine. But I've seen fancy cupcakery before. What makes these micro morsels any different? Griffin (who holds the wonderful title Master of Confectionery Arts) tries to assuage my fears. She explains most cupcakes are either a chocolate or vanilla base that's simply colored then topped with flavored frosting. What makes her cupcakes different is that each cake is individually made, so her lemon cupcake is actually a lemon cake topped with lemon frosting. Alright I admit, I'm intrigued. 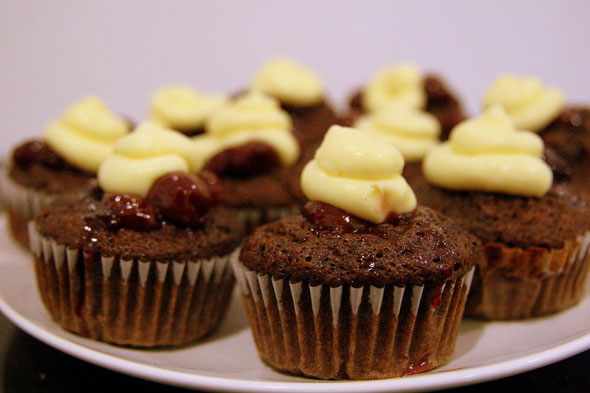 But Griffin's just warming up. In an effort to set her product apart from the gooey pack she's created, wait for it, the Four Dimensional Cupcake (!) No, cupcakes aren't expanding into alternate dimensions, they just now come with filling. Griffin stuffs her cupcakes with homemade custards, preserves, creams and ganaches. I'm now officially peckish - I want to believe.

It's an icy winter night and the Guinness Chocolate seems like a good place to renew my faith. The mancake is a chocolate base flavored with the famous stout, filled with an Irish whiskey ganache and topped with cream cheese frosting. Phew! As I take my first bite into the fourth dimension I know this is no ordinary cupcake. 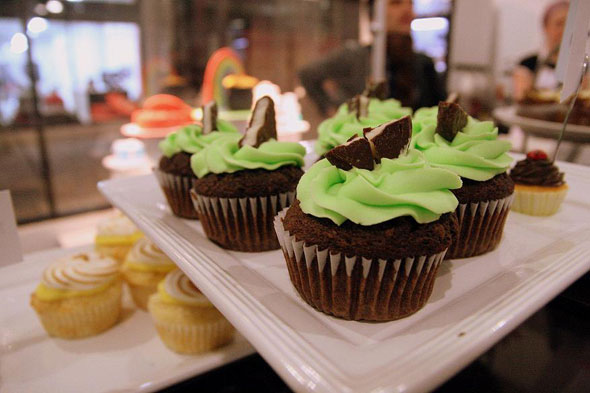 The base is moist and rich, almost like pudding. It's a mature, complex mouthful, more bitter than sweet. Then I hit the ganache. A rich goo with unmistakable whiskey tones that almost acts as a sauce, this mancake's getting better with each bite, and I haven't even reached the frosting.

When I do by the third happy mouthful I see the light. Like a triumphant third act tying everything together, the cream cheese is silky smooth with a subtle, refreshing tang that offsets the dense chocolate and rich ganache. For a brief moment all the elements waltz over my tingling taste buds, and I'm gob-smacked by how many flavors and textures have been worked into something so small.

Another moment and it's gone. I'm back from the fourth dimension, a little giddy and with a yearning for more.

For The Love of Cake has made a believer out of me, and with two dozen other flavors to try I've got a lot of time to make up for.

The cupcake is not dead, long live the cupcake.

The Best Wedding Cakes in Toronto