Nuit Blanche 2022 in Toronto is set to fill the city with art once again after a brief hiatus. This year's event will be the biggest one yet, with the all-night art experience expanding to neighbourhoods in Etobicoke and North York ,in addition to downtown and Scarborough.

This year's theme is "The Space Between Us," with works based on connections to place all "while bridging cultures and connecting communities and the environment."

It's the first time the overnight contemporary art event is being held since 2019, so expect an epic comeback filled with massive, larger-than-life installations.

If you're planning on staying out late into the night on October 1, make sure to dress for the weather. It's expected to drop to a low of 11 C overnight, typical fall and Nuit Blanche weather.

Here are my picks for must-see exhibits to check out at Nuit Blanche 2022 in Toronto.

Four boats will be desperately trying to row outwards in opposite directions, pulling at a massive tree in the centre creating a never-ending tug of war at Colonel Samuel Smith Park.

Make your way to the cafeteria at the Humber Lakeshore Campus and find this interactive digital piece where you'll play the role of a character trying to escape the commotions of everyday life.

Explore a life-sized model of a Japanese karaoke bar named Black Label. The exhibit will also feature karaoke performances throughout the night that you can check out at the Museum of Contemporary Art.

Head out under the Gardiner Expressway to an immersive installation within a hidden chamber that's inspired by Toronto's water systems. The installation shows how humans have shaped natural environments and how urban landscapes have changed over time.

Make your way through different layers of the installation that shows archival records of the first Chinese-owned business in Toronto, Sam Ching & Co. Chinese laundry at 58 Cecil Street.

This interactive installation at 235 Queens Quay West by Asli Alin is controlled by the audience, where their motions create different light and sound patterns. 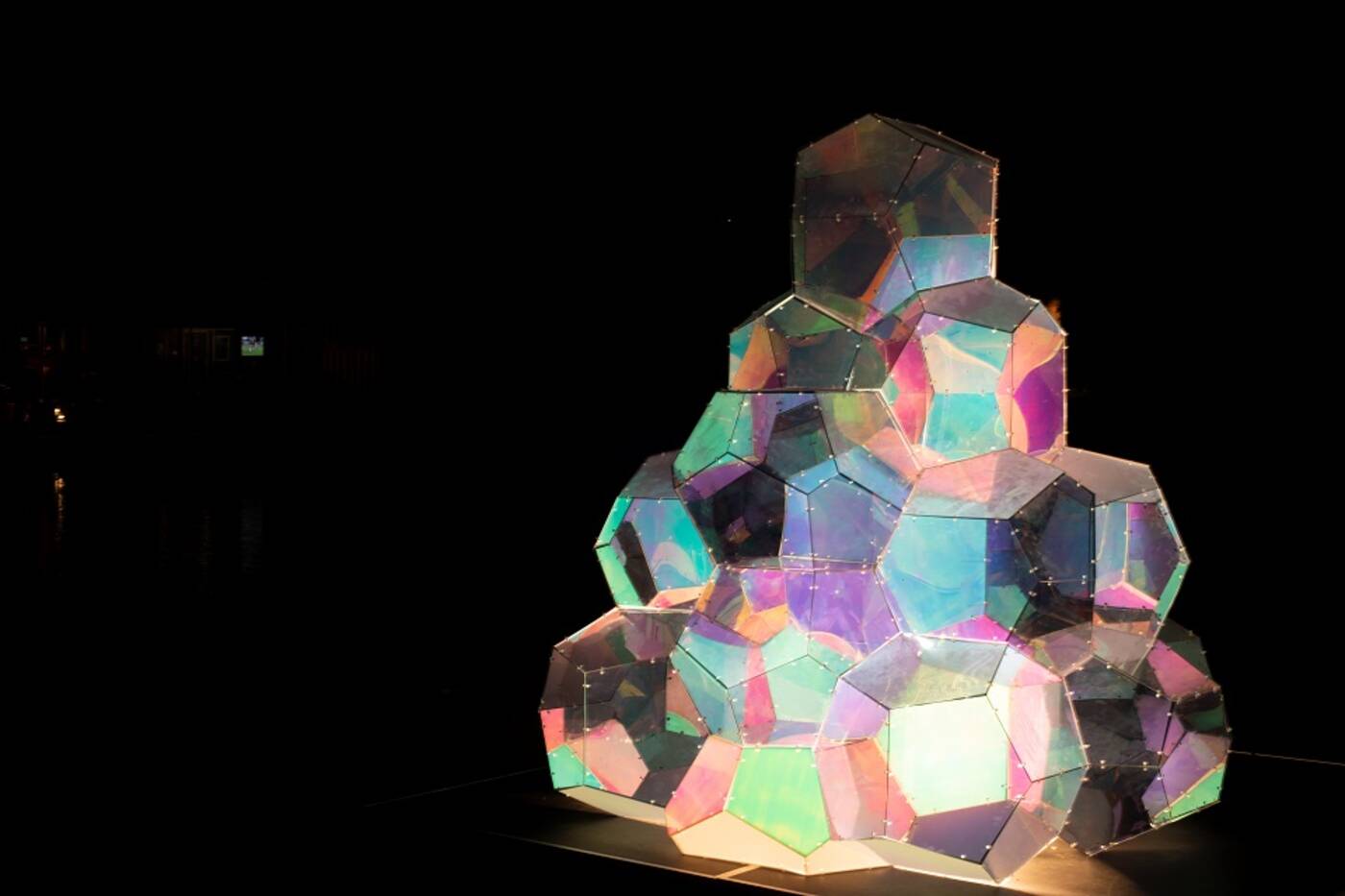 Movement controls how Illuminated and Inflorenscene looks like. Photo by Asli Alin.

Both Here and Somewhere Else

This installation is made up of six interactive lamps where you can either have or listen to a conversation, but beware, the lamp will light up if you're listening and show the room you're lurking. You can find it at 207 Queens Quay West.

Check out this dance film inspired by water pathways travelling from the mountain to the sea as it projects at Harbour Square Park West.

Head over to Nathan Phillips Square for a special iteration of Light of Tipi to honour okâwîmâw and other female giants who lead the way and care for us. The tipi will be illuminated both in the physical realm and the portal through AR.

Reflect on the land we share at this audio-visual installation that has a video projection of Toronto's urban landscape all while listening to audio of composed stores and interviews from different Toronto neighbourhoods at 199 Bay Street.

Check out this film that shows the struggles Indigenous youth face in the modern world at the Humber Lakeshore Campus.

Step into the space where The Ward, a space diasporic communities could settle in, once stood. The immersive multimedia experience reflects on the nature of diaspora-isolating and community-building at Larry Sefton Park.

Step Into My Space

Head out to the Spadina Museum where you'll find multiple artists showcasing different forms of media including films, sculpture, painting, and live performances. Plus try to find your way through the massive maze on five acres of lit nature.

Grab some coloured, non-toxic biodegradable fust and shower the street-long all-white dinner table in the middle of the street. The installation at 100 Yonge Street is set to symbolize a celebration that marks the many family dinners missed over the last two years. 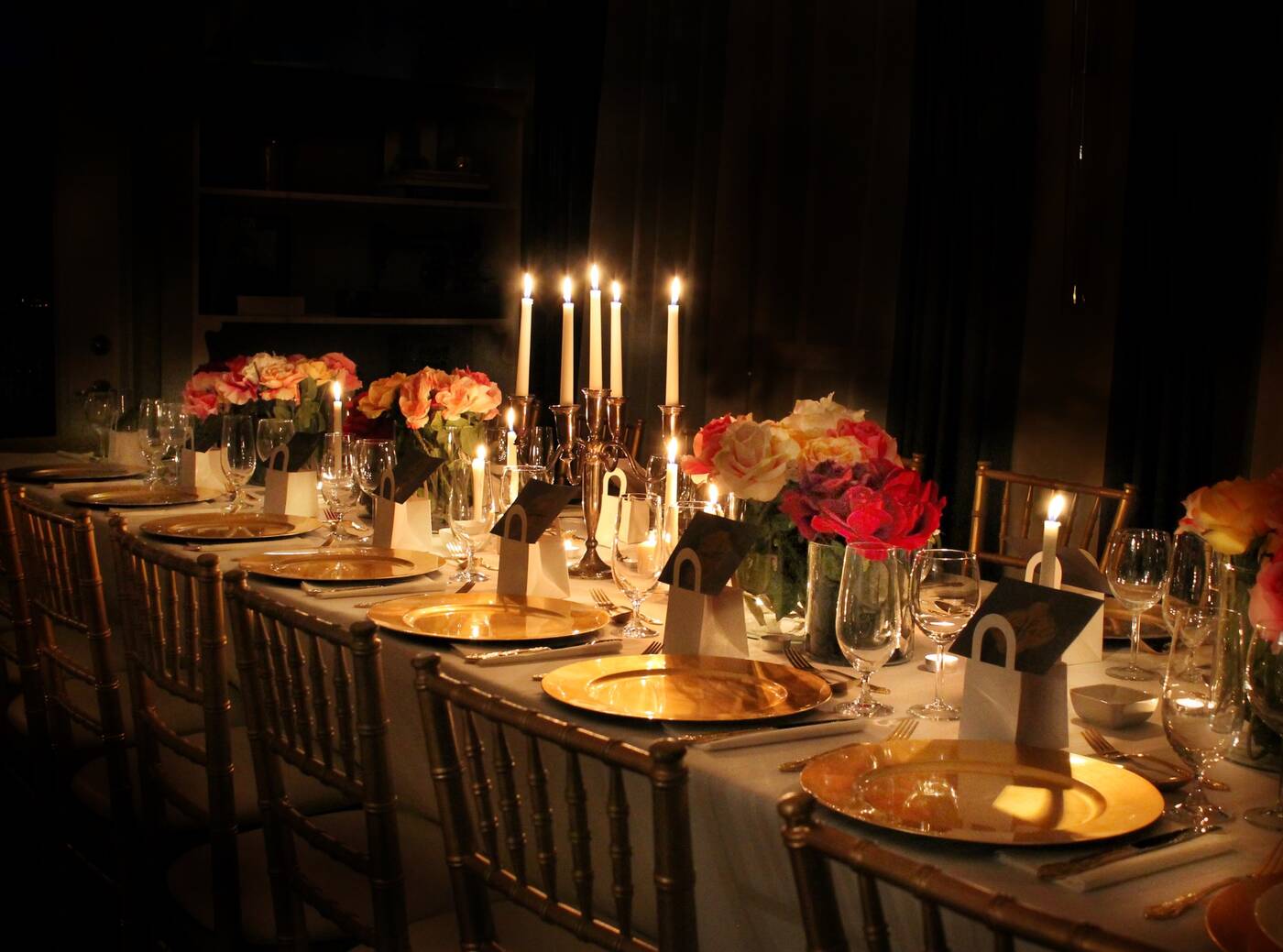 The Dinner Table will allow guests to decorate the all-white table with an explosion of colour. Photo by Studio One.

Through dance and karaoke, the multi-media piece features a six-metre wide inflatable structure with heart monitors to inflate and deflate the piece. The work is meant to show the labour and work of the body at 8 Queen Street West.

The Space Beneath Us: Mycelial Meditations

Head over to the east end at 1502 Danforth Avenue which will transform a gymnasium into a silent disco. Dance and celebrate the last two years when we weren't allowed to dance together.

MUSE Arts Creative Lab is being taken over with this digital and immersive installation that has been an ongoing initiative for several years. The piece is interactive and asks those who visit to create their own dove to add to the growing project.

Between a Rock and a Hard Place

Make sure your phone is charged as you'll need it for this augmented reality installation at the TIFF Bell Lightbox. The digital installations take you on a tour through Southern Ontario, showcasing it through an immigrant's eyes.

Walk through a labyrinth of coloured eye-shaped light installations that embody the theme of immigration at 5100 Yonge Street. 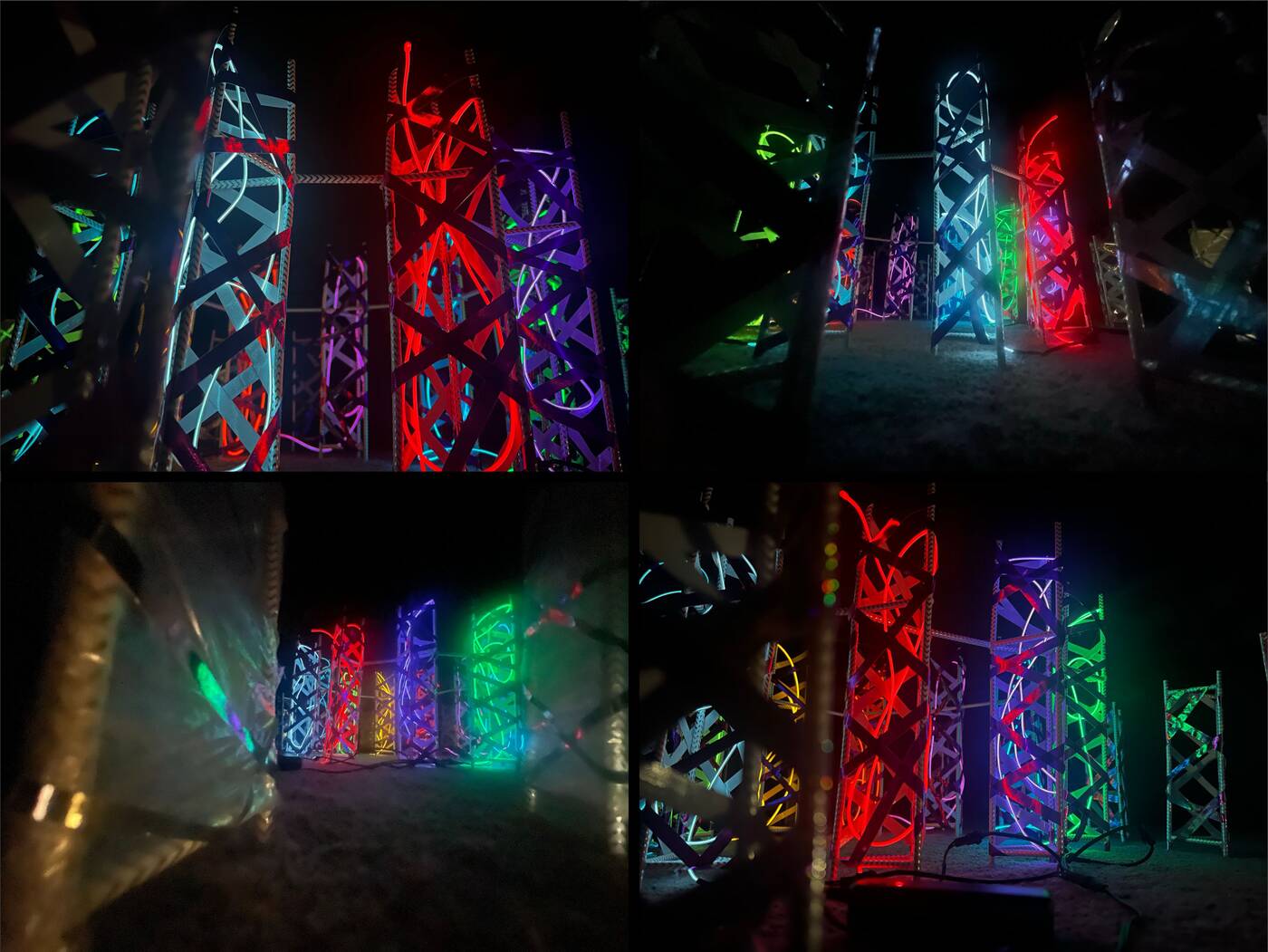 Explore the maze of eye-shaped light sculptures decorated with vinyl and metallic tape to diffuse and reflect light. Photo by Nargiza Usmanova.

Channel your inner child while an everyday corridor at 156 Borough Drive transforms into a massive ball pit as performance artists move and interact with the piece.

These inflatable sculptures with patterns and carvings will be floating around 5150 Yonge Street to symbolize the importance of continuing cultural practices and mark-making.

Why so many ties?

This installation filled with 100 planks and plastic bags at 300 Borough Drive can be experienced in two ways. Viewers can either look at the sculpture as it is or move the planks creating a path to navigate through, participating directly into the piece.

Help reclaim a piece of Toronto's Black history by contributing to a structure's construction with bricks. The installation at 8 Hagerman Street features a demolished faux brick building that has historical images projected on its windows while each faux brick will have names and descriptions of individuals forgotten by history.

The interactive installation located at 207 Queens Quay West invites viewers to step into the center of interwoven fabrics, and to become one with your senses as visuals and audio guide you through the experience.

Head out to Cecil Community Centre and be transported into the future as this 3D animated experience reimagines what Toronto's Chinatown will look like in 30 years. Accompanied by music, you'll be able to hear the artists discuss their dreams, hopes and fears for Chinatown.