New York-based artist Virginia Overton is the latest artist to be featured in Evergreen's curated series of temporary, outdoor public artworks, which in the Lower Don Valley last fall.

Three pieces from Overton's exhibition Built are currently on display along the Lower Don Trail (with more to come), but one in particular stands out for its sheer size and functionality.

Behold the swing: A sixteen-foot salvaged pine beam suspended from a found steel gantry and incorporating other raw or recycled materials. 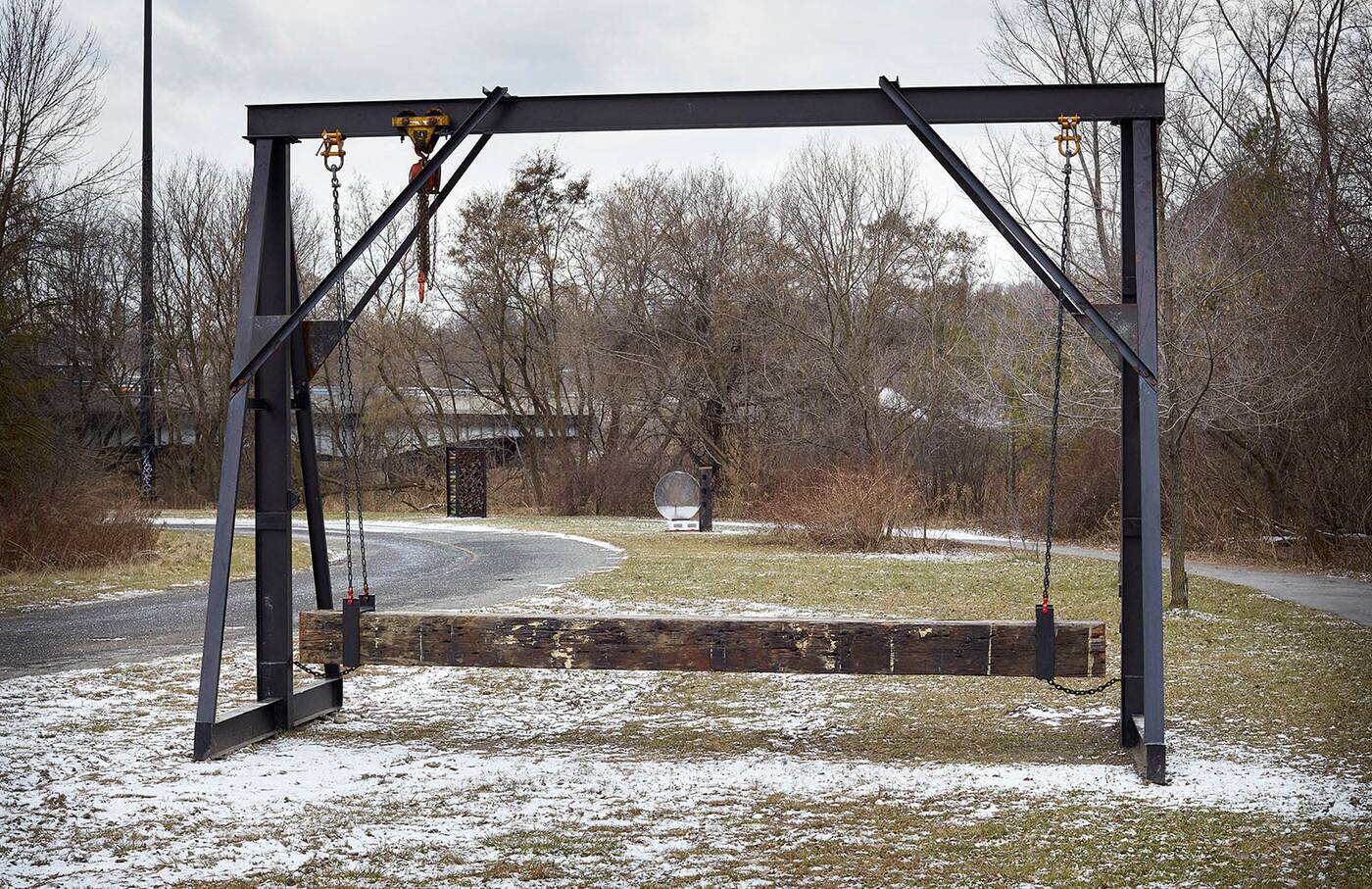 You could fit an entire family on that swing, grandparents and cousins included. It's huge, and it would definitely require everyone to cooperate in order to move as intended. But that's not the point of this project.

"In her work, Overton re-purposes the ubiquitous industrial and natural material found in cities and rural environments across North America; the rusted I-beams, wooden joists, salvaged metal pipes, gantries, motors and pick-up trucks that make up the built environments of cities like Toronto and New York," reads the Don Valley River Park's website.

These materials are said to resonate specifically with the industrial landscape of Toronto's Lower Don Valley, and are meant to "offer potent reflections on issues of circulation and reuse, and encourage a close look at the material language of cities, and the economic systems that shape the built environment."where rural and urban, industrial and post-industrial converge."

Yesterday's clue was from one of the public art sculptures by New York-based artist Virginia Overton. Read more about her work in this Q&A with Don River Valley Art Program curator, Kari Cwynar. #ArtInTheDon https://t.co/YFQbF1bvGt pic.twitter.com/a8JNEyZ2Qp

Nearby lies an eight-foot-tall set of rusted steel girders holding dozens of colourful, cut metal pipes from the artist's own studio.

"Together the pipes act as impromptu lenses, framing and focusing in on the Lower Don Valley," reads a description of that work in its new Canadian context.

This spring, the art program will add yer another sculpture made by Overton during her time in Toronto. That piece is being made from a discarded glass carrier found in the Toronto's west end, inlaid with cut marble from the artist's studio in Brooklyn.

You can see it all for yourself on the Lower Don Trail, a short walk south of the its Pottery Road entrance. You can also simply head north from Riverdale Park to find the giant swing—and let's be real, you want to find that swing.

It'll look awesome in photos when winter is gone.