Toronto is a great place to be a comic book lover

When I have friends visit Toronto for the first time, one of the first thing that strikes them as fellow book-lovers is that we have a remarkable number of small bookstores around the city.

Over the years, they’ve dwindled down but comparable to many other cities, especially in the United States, there’s still a ton.

The same can be said of our comic book market. While the shops are scattered around our large city and into the GTA, we are blessed with an abundance of places to buy our comic books, collectible statues and figures, trading cards, and more.

It makes sense, as Toronto is a hub for all things geeky with a thriving movie and TV industry where many of the production companies film comic book adaptations.

Toronto is also host to two of the biggest conventions in North America (FanExpo and TCAF, respectively). Plus, indie darling Scott Pilgrim Vs. the World was set here as a comic book and a feature film.

There’s no denying that print media is dying off and the same things that caused many bookstores to close their doors is happening to comic book shops too. 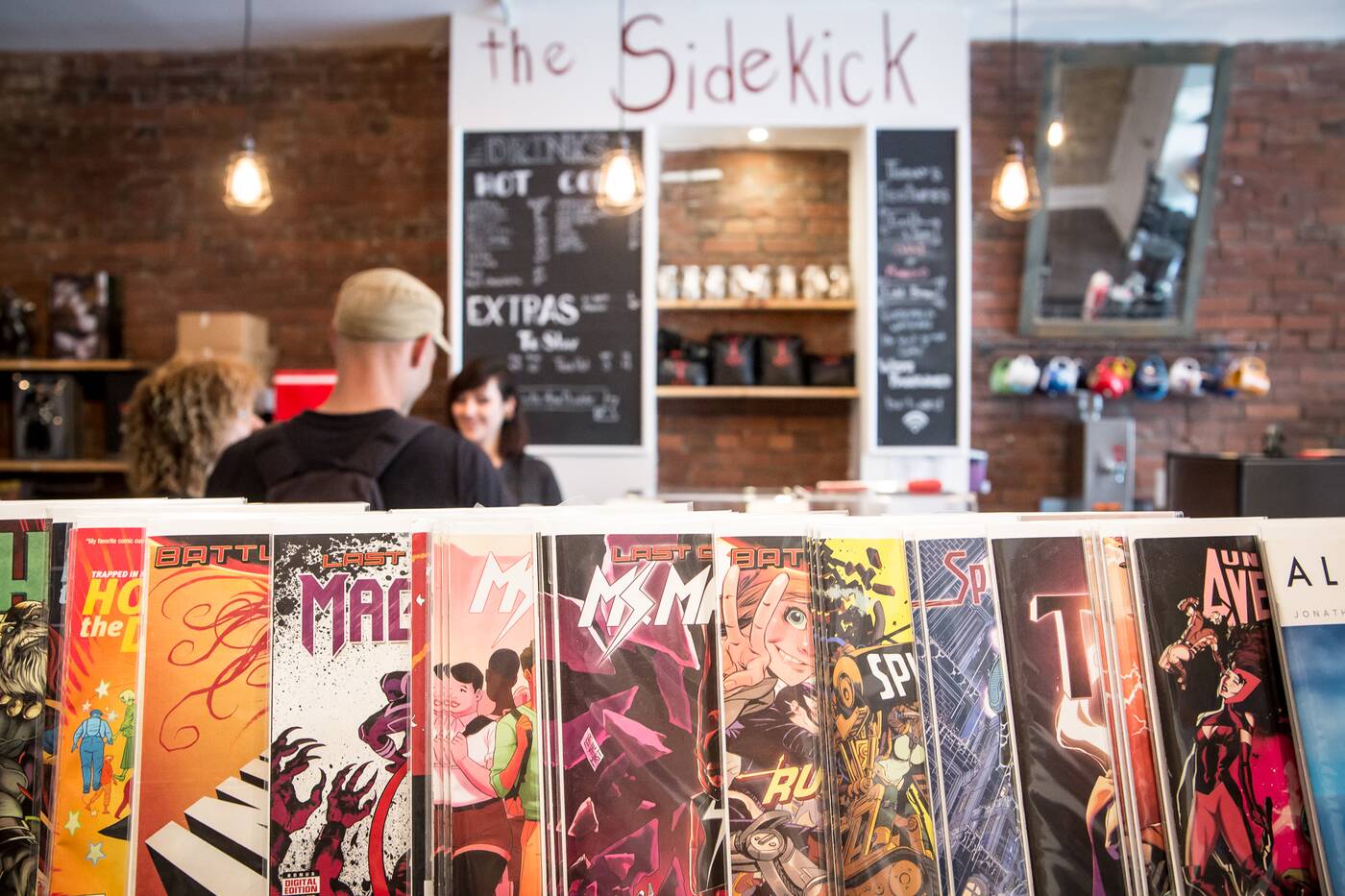 The Sidekick in Leslieville pairs coffee with comics. Photo by Jesse Milns.

Stores have had to adapt in order not just to survive but to thrive, especially those that continue to do business in prime locations like the Silver Snail.

The Silver Snail occupied the same spot on Queen St. West for 35-years before relocating to Yonge and Dundas.

In order to account for the rise in their rent and to build a bigger community around their brand, they partnered with The Black Canary Espresso Bar. This brought in new clientele who may have not previously thought to come into a comic shop at all, and helped increase their foot traffic.

Whether that translated to sales in the comic shop itself is another story, but this did get bodies into the store. It diversified the shop, built a community, and helped people see that comic book shops aren’t always like something in an episode of The Big Bang Theory.

The fact that the Silver Snail is not remotely wheelchair accessible remains another problem entirely, though. A problem that alienates a big demographic of geeks. This remains a problem for many other comic book shops as well.

Other shops in Toronto and outside of Toronto have also begun integrating cafes into their shops.

The Sidekick has more of a vibe of being a cafe with a comic book shop that happens to also be there. And then there’s Page & Panel, which came equipped with a cafe when they moved into the Toronto Reference Library (where a Balzacs already resides). 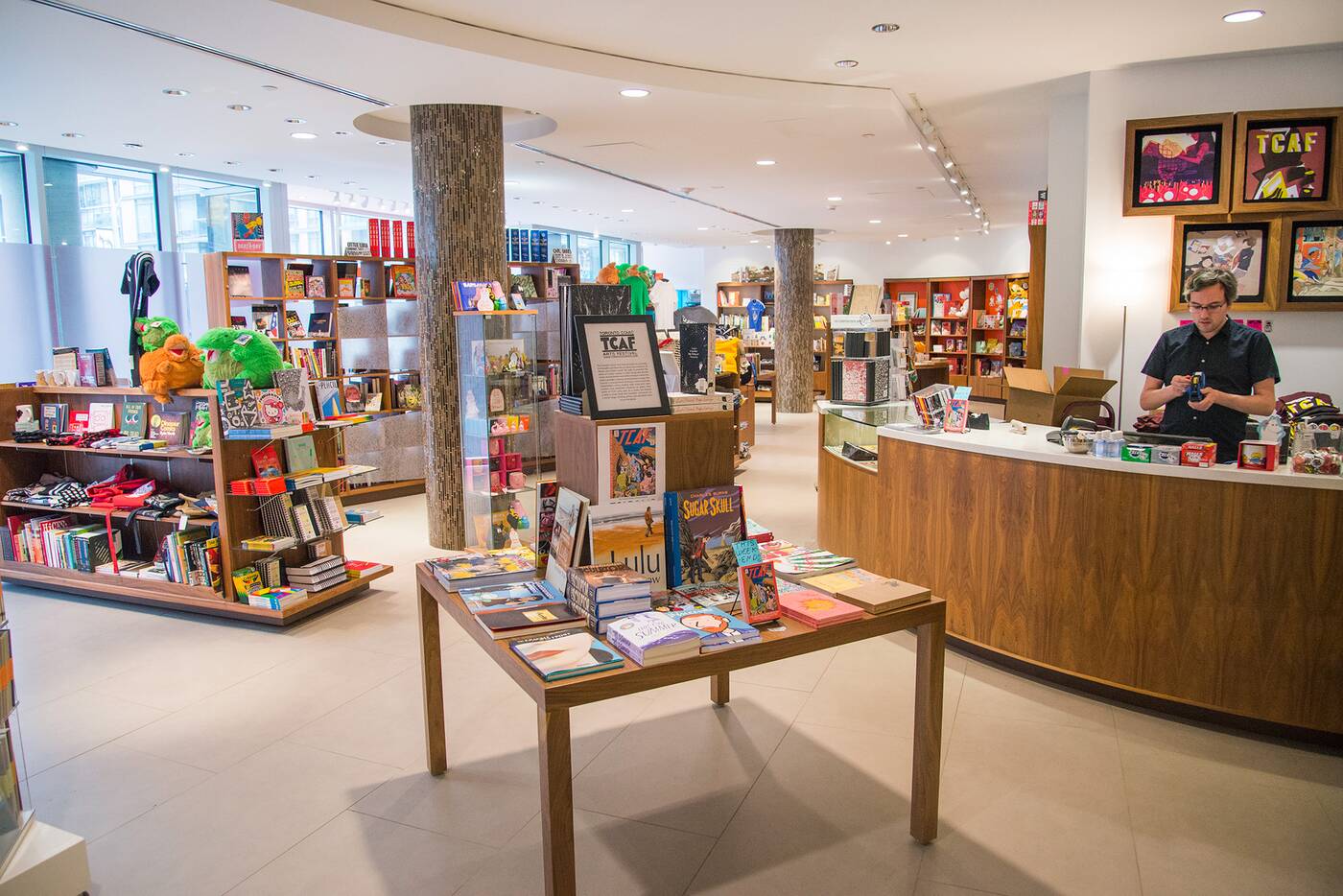 Page & Panel in the Toronto Reference library is a great source for comics and other collectibles. Photo by Hector Vasquez.

Page & Panel might be the best example of a comic book store that’s doing everything right. As mentioned, TCAF (Toronto Comic Arts Festival) is one of the best comic book conventions in North America, and also one of the most-respected. They are affiliated with The Beguiling, which is yet another great shop.

The shop itself is the opposite of what most people think of when they think of a comic book store. It’s a bright shop with colours everywhere.

There are displays of new and interesting comics that you don’t see prominently featured at other shops; the staff are welcoming, inclusive, and helpful; there’s a absolutely massive section of kids comics and merch; cool beverages are for sale (with coffee and other items available at Balzacs); and it’s accessible.

Page & Panel also plays host to creator launch parties, creator signings, and other community building events from time to time, like Comic Shop Ladies Night. Plus, they carry a wide range of comics and zines from local artists and creators, which aren’t typically be found in other shops in the city. 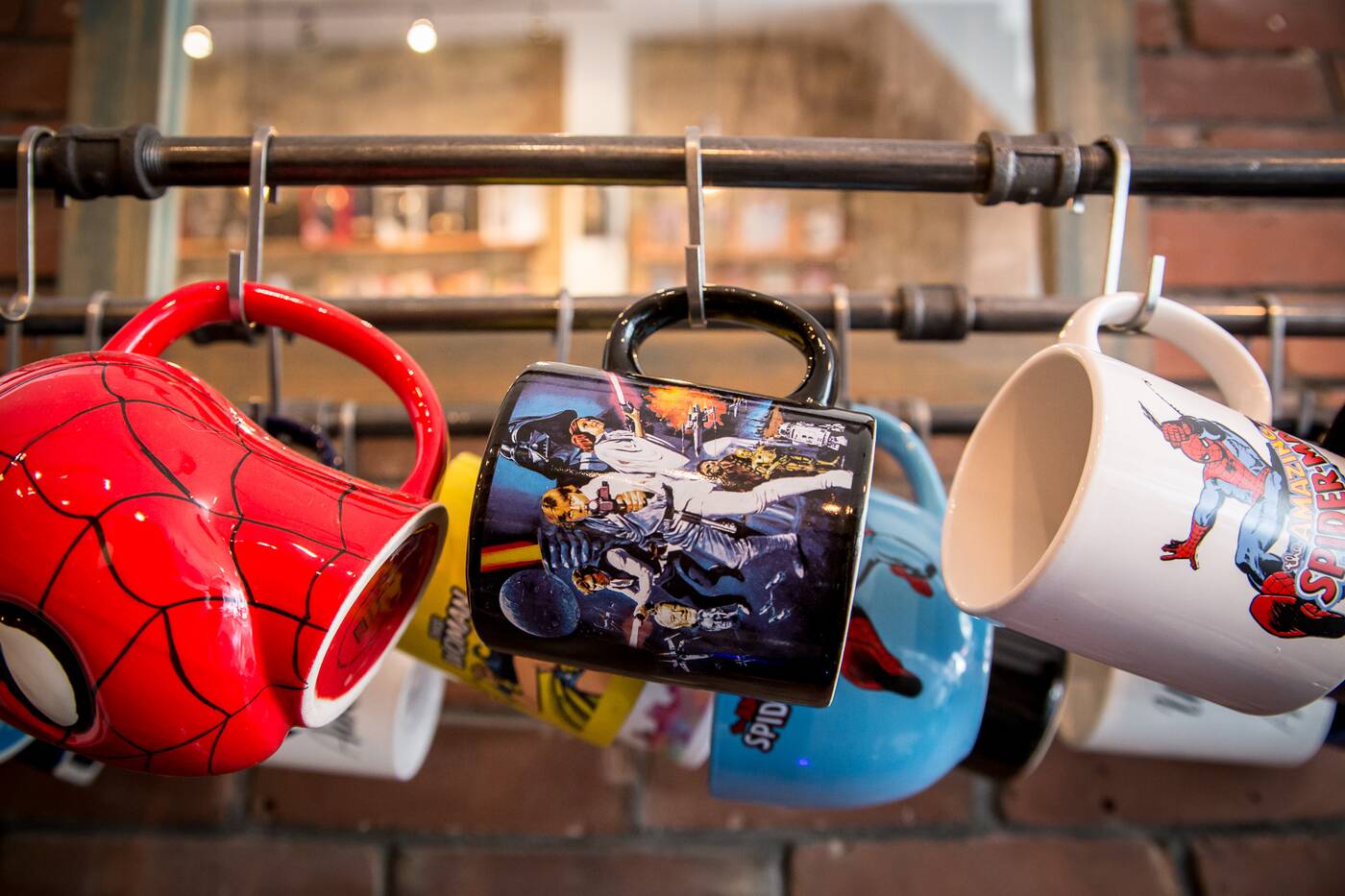 The Sidekick is also excellent about incorporating events and socials into their calendar. The shop may feel more like a cafe than a comic book store, but that's not a bad thing.

It's neatly organized and isn’t overcrowded with merchandise. There’s a great variety of things like collectibles, single-issue comics, and collected trade paperbacks for people to buy.

Diversifying the way that stores present themselves is the way that stores in Toronto are continuing to thrive. Geek culture over the last several years has become very mainstream, possibly thanks to the success of comic book movies and comic conventions popping up in cities of all sizes around the world.

As a result, it’s no longer considered “uncool” to be into Doctor Who, Batman, Wonder Woman, or Battlestar Galactica. As these shops realize that, they welcome in new crowds of people with open arms and helpful staff to guide them. This makes them more likely to do well in the long run, the industry is starting to see.

The "helpful staff" aspect goes a long way in this new era when people can simply go online to Amazon or ComiXology (also owned by Amazon) and purchase their comics.

An even better deal is reading comics for free, as the library now carries them. Apps such as Hoopla integrate the library catalogue right into your digital devices, making it easy to read new comics anywhere. 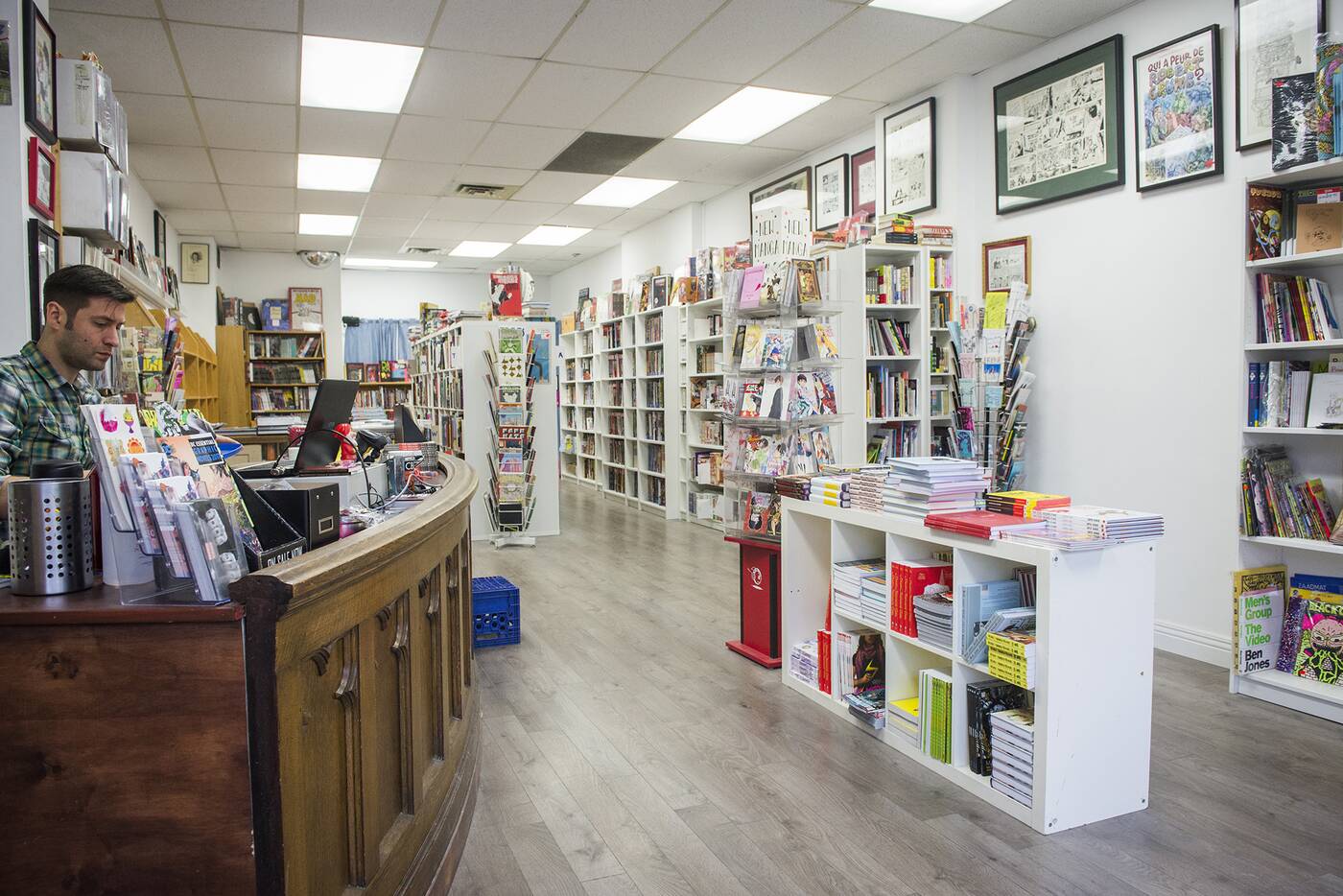 The Beguiling is practically a Toronto institution. Photo by Hector Vasquez.

Because of this, now more than ever, shops need to have environments where they’re helping usher in new readers with staff members who represent and understand the growing market of women, people of colour, and LGBTQ+ identifying people.

Staff need to help showcase books that speak to those audiences who are trying to find their way in the market and will happily put money into supporting physical books if they find a place they feel welcome at.

I briefly mentioned Comic Shop Ladies Night in passing, but this team is also doing their part in another sense. Bringing in new fans and helping to showcase new comic shops are vital projects.

The event is quarterly and isn’t held solely at one comic book shop. Rather, the organizers behind the event choose different shops all around the city.

The hosting shop ensures that only women or non-binary staff members are working for the evening, so that attendees can make purchases throughout the event.

The women attendees are given the chance to win prizes, learn about new comics, and to mingle with other like-minded people in an inclusive environment where they can feel safe and welcome.

These events and more help to build and strengthen a strong community within the city.

It not only breeds new readers who approach the field with positivity and voracious appetites to discover more, but creates new aspirations for young writers and artists to breath new life into a medium that has been around for over 85 years. 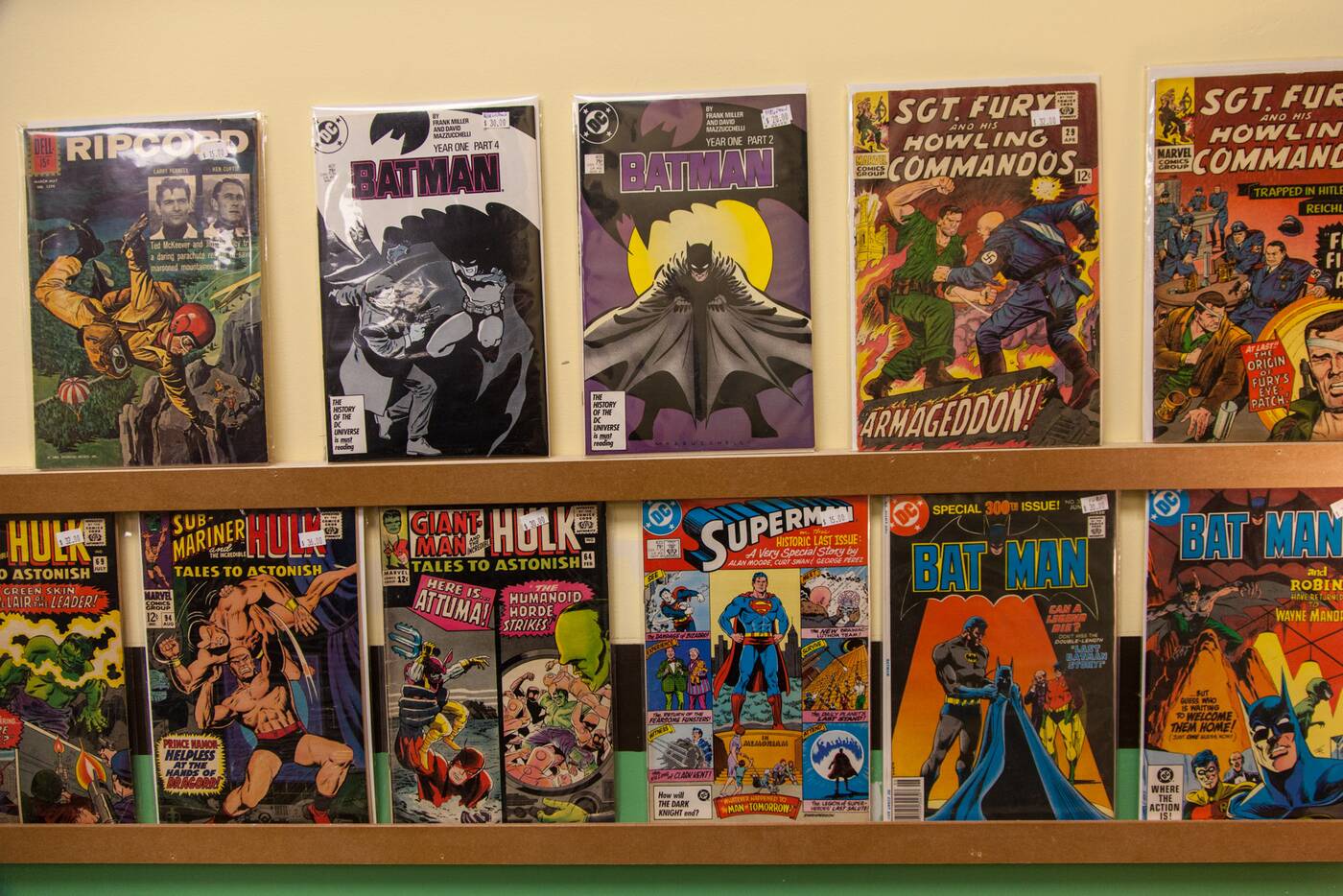 You can find all your classics at West End Comics in Parkdale. Photo by Brian Chambers.

With the number of comic book shops and geeks within Toronto and the GTA, it puts us in a unique position to try new things that can help set a standard around the world for engaging with new audiences and keeping shops open.

Very few retail markets have such an opportunity to build entire communities with their patrons. Toronto comic book stores can thrive with the help of those around them willing to think outside the box and find new ways to welcome fans with open arms.

Hector Vasquez at The Beguiling