Artscape Youngplace in Toronto is home to ghosts of tiny children who wander adrift through the corridors of 180 Shaw St - or so it seems. It used to be their school, and now it's Artscape's newest property. Built in 1914, the building is still dotted with remnants of the past, despite its recent overhaul. Trophies won by students in decades gone by are displayed in glass cases on the first floor.

Check out this photo gallery for a visual tour of the building.

Further down the long, echoey hallway, clocks are mounted on the wall, each one stopped at 8:32 - the time (either in the morning or the evening) when the school officially stopped being a school. 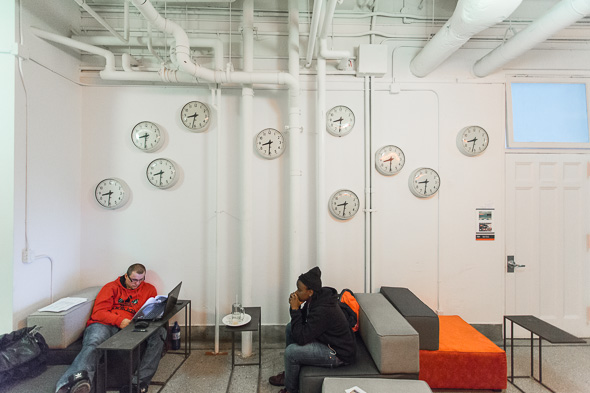 The TDSB closed Shaw Street School in 2000 because the cost of running it was just too high compared with the level of enrollment. Now, it's been reclaimed and renamed as Artscape Youngplace, and it houses galleries, studio space, and arts organizations like the Luminato festival. 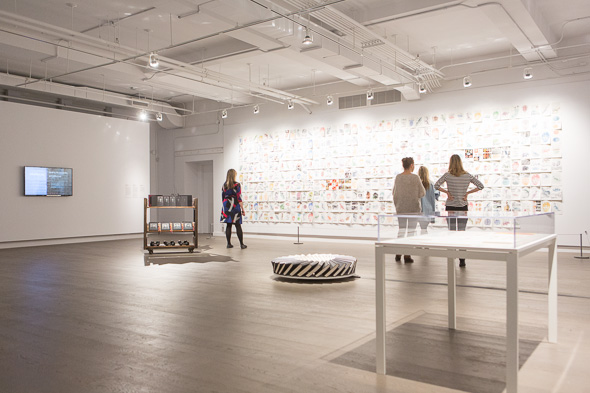 Much of the building's current identity stems from its origins as a school. The Koffler Gallery on the ground floor, for example, juxtaposes the mix of old and new spirits that characterize the building by hosting an exhibit in its hypermodern white space called "We're in the Library", which nods to the space's own roots. It's in what used to be the school library, and a hushed energy still exists there, silently asking all who enter to use their indoor voices. 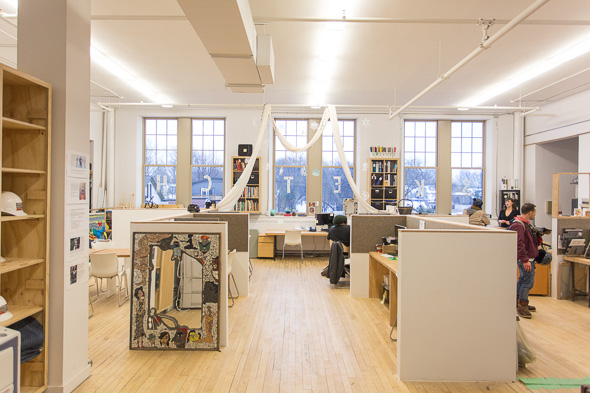 Small children's voices, layered one on top of the other, read aloud stories about mermaids, fish and the supernatural from sets of headphones available to wear while looking at the visual works. One piece is cheekily sketched in chalk on a chalkboard, and another, spanning an entire wall, is inspired by colouring book pages of dinosaurs. 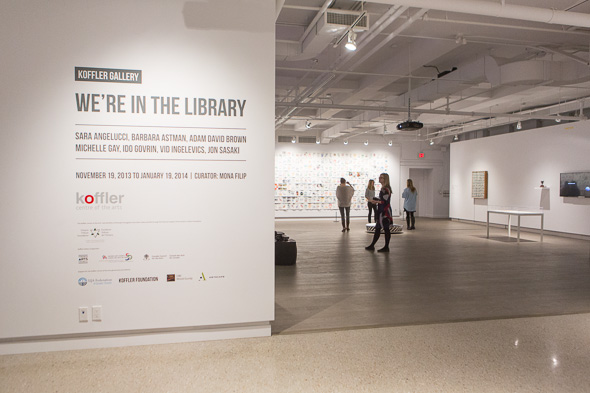 "We're in the Library" is made up of mixed media testimonies to the building's origin, and its creepiness level makes for a perfect tribute to the old school. The works currently on display, though, by Toronto artists Sara Angelucci, Barbara Astman, Adam David Brown, Michelle Gay, Ido Govrin, Vid Ingelevics, and Jon Sasaki, will only live in the gallery a little while longer. The space will soon be home to other pieces by both local and international artists. 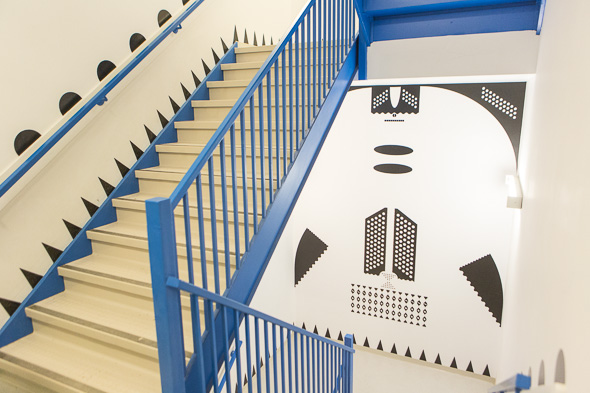 While history is alive at 180 Shaw, the organization has brought its own creative spin to the space. The building itself inspires creative thinking, with the typically barren, spacious stairways at each end of the old school completely covered in whimsical vinyl wall art - smiley faces, word play and intricate abstract patterns are splashed up to the high ceiling thanks to makeovers by artists Debbie Adams, Melissa Fisher and Seth Scriver. The stairways inspire play - photographer (and apparent causeless rebel) Andrew Williamson starts reminiscing about letting bouncy balls loose in similar stairwells as a child. 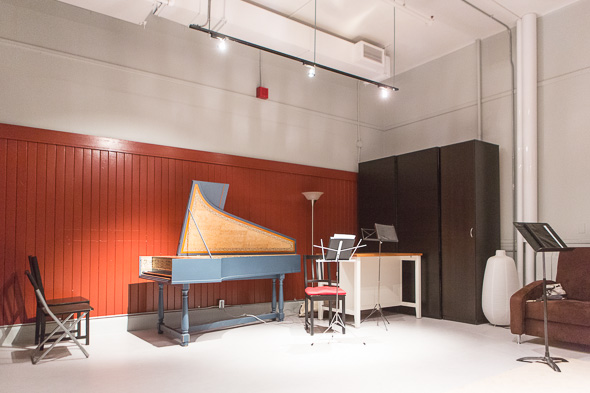 What goes on behind closed doors is more interesting, though. People are churning out sparkly brain children every day, and the building is full of teachers and disciples. Paperhouse Studio on the ground floor conducts classes and workshops on how to press cotton, flax and hemp into unique sheets of textured paper. On the second floor, fresh with the chemical tang of fresh paint, Elyssa Lefurgey-Smith runs the Bellwoods Academy of Music. As we nose our way in around the corner of her door, she has just enough time to show off her small rehearsal space and grand piano before a small girl comes in with her mum for her after school lesson. 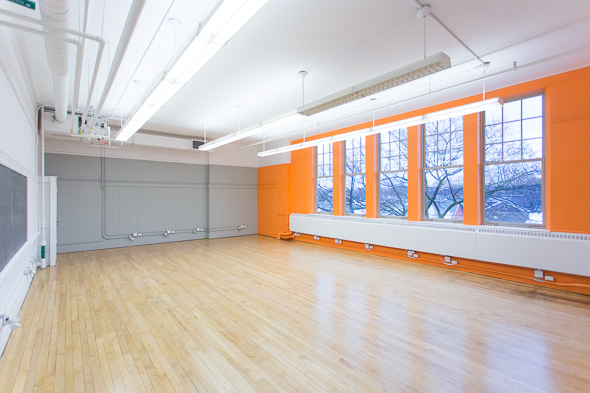 There are private studio spaces sprinkled throughout the old school too, but the 75,000 square foot building is designed to do more than just bring artists back to the now completely gentrified Queen West area. It offers a place for community gatherings with a public, open space on the first floor when you come in the door (complete with wifi).

Perhaps fittingly, the building's Coffee Pub is located in what used to be the guidance counselor's office, trendily stocking all local everything whenever humanly possible - treats come from the likes of OMG Baked Goodness, Owl and Goose Smoothies, Fresh Coffee Network, Rowe Farms, Woodlot, 100km Foods, and Green Shift, among others. 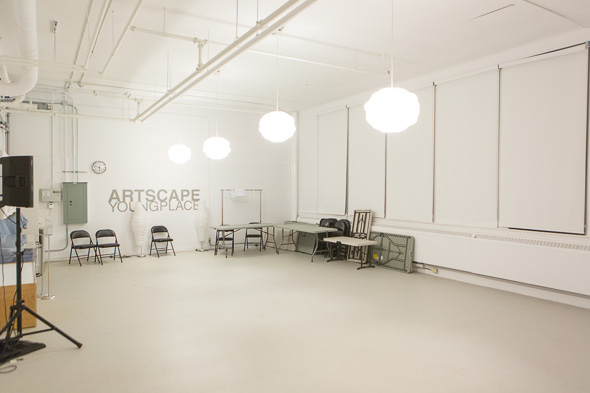 While many of the suites operated by businesses like the Bellwoods Academy of Music are outfitted with small kitchenettes and more than enough space to function as live/work, Artscape operates the building as strictly non-residential. Tenants do have 24/7 access, but after extensive neighbourhod consultation it became clear residents didn't want artists living in the building, ostensibly to stave off condo development. 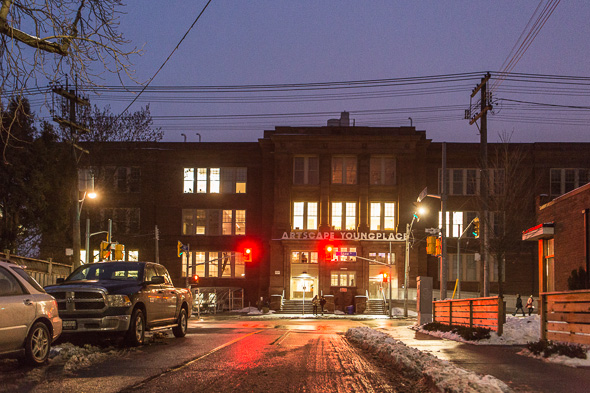 Alongside the more permanent tenants, Independent artists come in and out of the building, too, using the space on an as-needed basis. Space is available for shows up to a month long for only about $500, or for an evening for about $60. There are independent gallery and work spaces available, and a communal one too, complete with tools like sewing machines and sergers. It's taken seven years, $17-million dollars, and countless hours of brainstorming, but Shaw Street School's childlike spirit is alive and well again after a long, quiet hiatus.

View more photos of Artscape's Youngplace in this gallery.