Working from home isn't for everyone — least of all people living in tiny cramped condos with partners, roommates, kids or even pets. Has your cat ever flashed her butthole to all of your coworkers during a Zoom meeting? Because mine has (sorry, Greta.) And I am not alone.

But, virtual meeting flubs and less-than-ergonomic kitchen workstations aside, a lot of people actually prefer the world of remote work to office life.

According to the results of a recent Angus Reid survey, the vast majority of Ontario residents currently working from home hope to continue doing so (at least part of the time) as things open up post-pandemic.

This represents a significant change in attitudes toward remote work than what was observed early on in the pandemic when everyone was feeling isolated and sick of their sweatpants.

Only four per cent of all 2,550 Canadian adults surveyed between March 1 and March 4 of 2022, in fact, indicated that they would prefer to go back to their place of work as they did before COVID hit.

In Ontario, that figure is three per cent, with 36 per cent of people in the province indicating that they wish to keep working from home full time and everyone else preferring a hybrid model in which they split time between both locations (predominatly home with some trips to the office for the majority of hybrid respondents.) 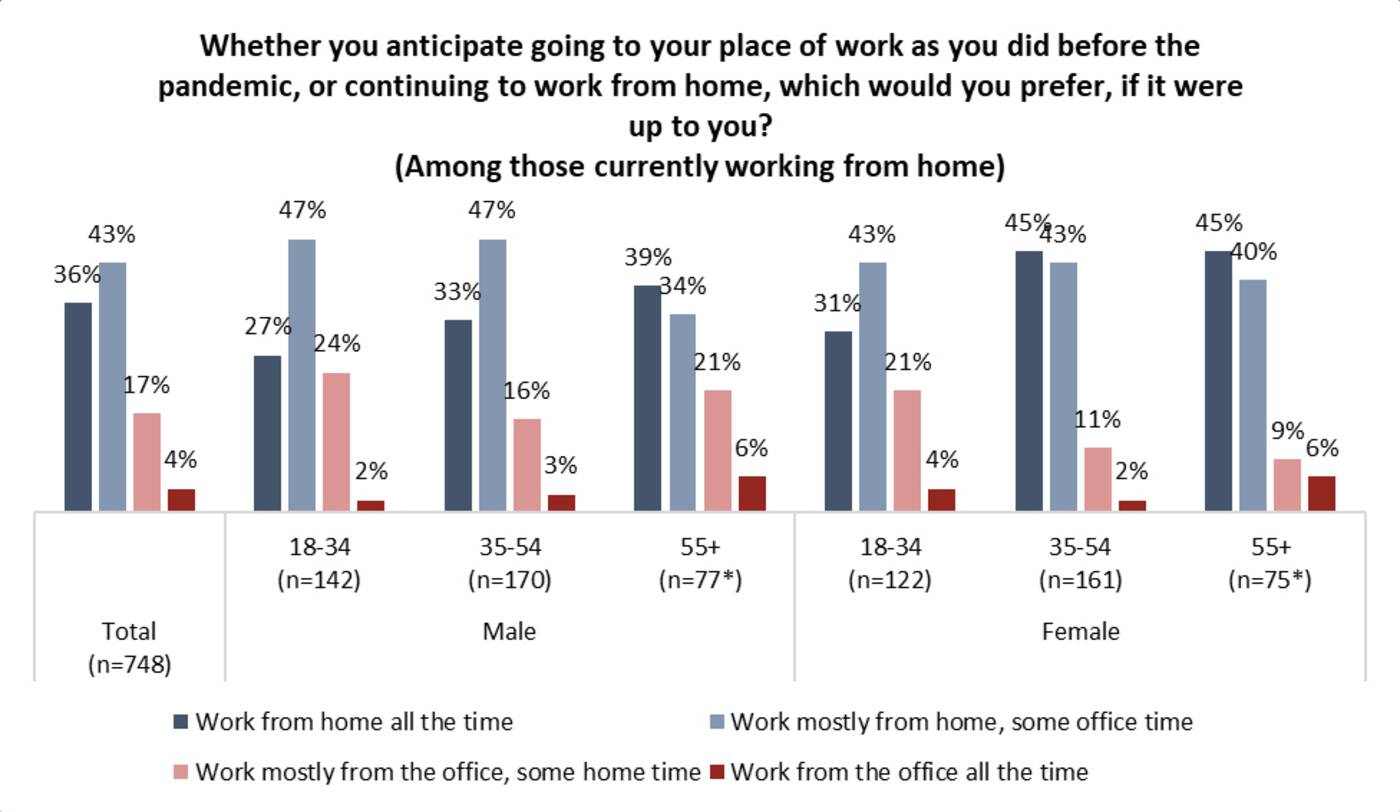 Among Canadians currently working from home, only four per cent in total want to go back to the office full time. Image via Angus Reid Institute.

This latest survey on workplace attitiudes follows a similar survey conducted by Angus Reid in August of 2021. When comparing results, researchers found that people are generally less keen on going back to the office now than they were last summer, which is interesting given that offices are only just actually starting to reopen en masse.

Contrary to what the majority of workers were saying early on in the pandemic, many have gotten used to working from home after two full years of it.

The Angus Reid report explores how "the great home-office reorganization brought on by the pandemic" has impacted not only job satisfaction for remote workers, but improved their senses of work/life balance, relationships with spouses and lives overall.

"Overall, Canadians are more likely to say the work from home experience has not hurt their productivity — four-in-five say it is 'good' or 'great' – though they are more split when it comes to its effect on their connections with colleagues," reads the report, noting that about half of remote workers surveyed found it more challenging to connect with their colleagues digitally.

"However, perhaps it is the non-work considerations that are the more significant reasons workers from home are less than enthused to return to the office full time. Canadians who work from home are more likely than those who don't to say their work/life balance (35% vs. 21%), relationship with their spouse (32% vs 21%) and their life overall (30% vs 18%) have improved over the course of the pandemic." 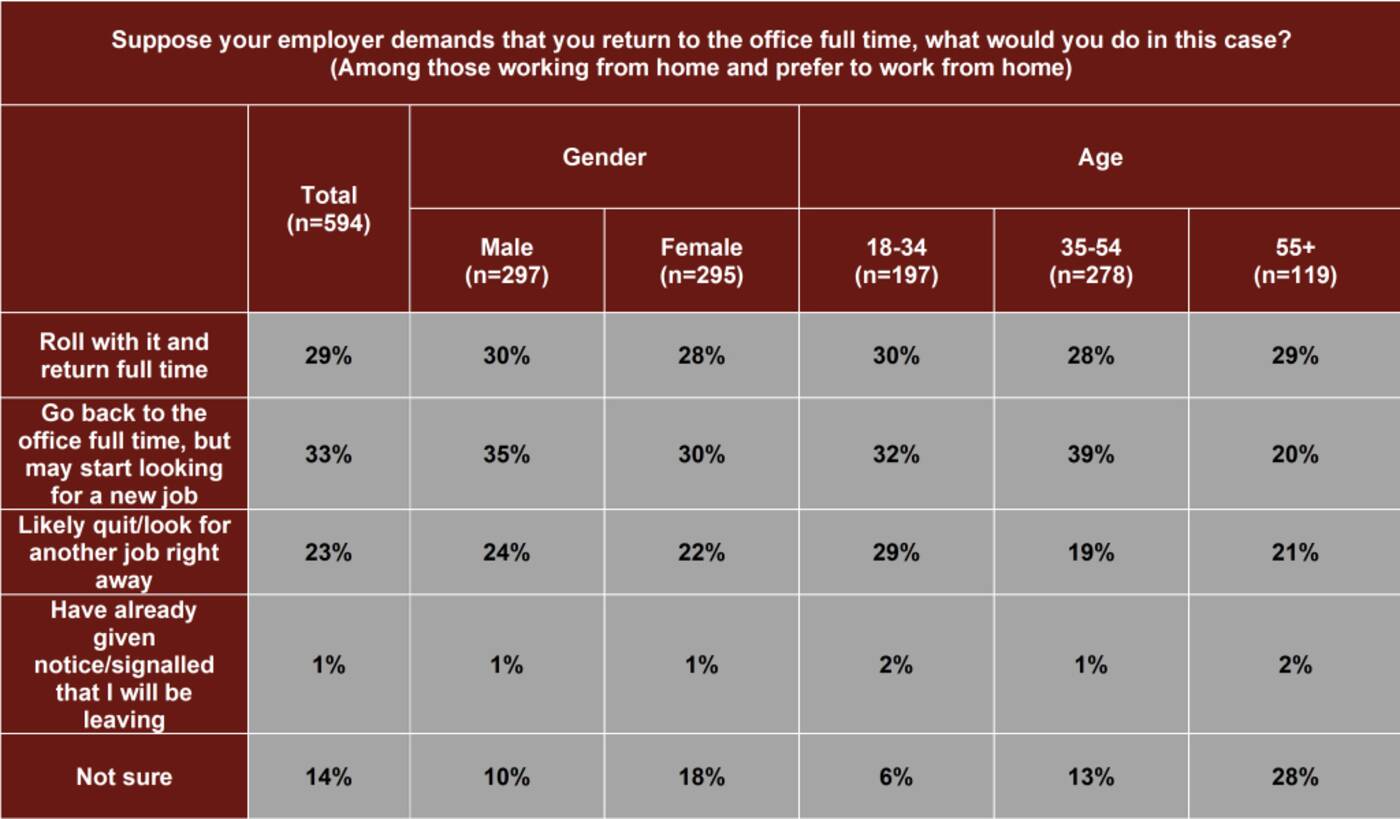 The majority of Canadians prefer a hybrid model of work moving forward, with 23 per cent saying they'd quit and look for a new job if mandated to return to the office full time. Image via Angus Reid Institute.

One of the survey's most intersting data points pertains to what people actually plan to do if and when they are told to come back to work IRL full time.

"Suppose your employer demands that you return to the office full time, what would you do in this case?" reads a question asked to all respondents currently working remotely.

"This is a marked shift of the attitudes of Canadians working from home from last summer. Then, two-in-five (39%) said they would roll with it and return full time without complaints. Now three-in-ten (29%) say the same," notes the Angus Reid Institute.