It's been nearly two years since the world of work as we once knew it dissolved into a strange purgatorial madness between the office and our living rooms, leaving Toronto's downtown core so empty that wild animals started to take it back.

Despite all sorts of efforts to entice employees and employers back into their gleaming office towers, the Financial District remains a relative ghost town compared to what it was before the pandemic struck in March of 2020.

We can thank multiple waves of COVID-19 and the ever-present threat of more outbreaks for the extension of this all-the-time-remote-work-lifestyle, especially as winter approaches and case numbers start to go up again.

Still, with nearly 85 per cent of eligible Toronto residents now fully vaccinated, one might expect that a great number of desk workers are back in the office. Not so, according to new data from the Toronto Region Board of Trade (TRBOT) and Telus — quite the opposite, in fact. 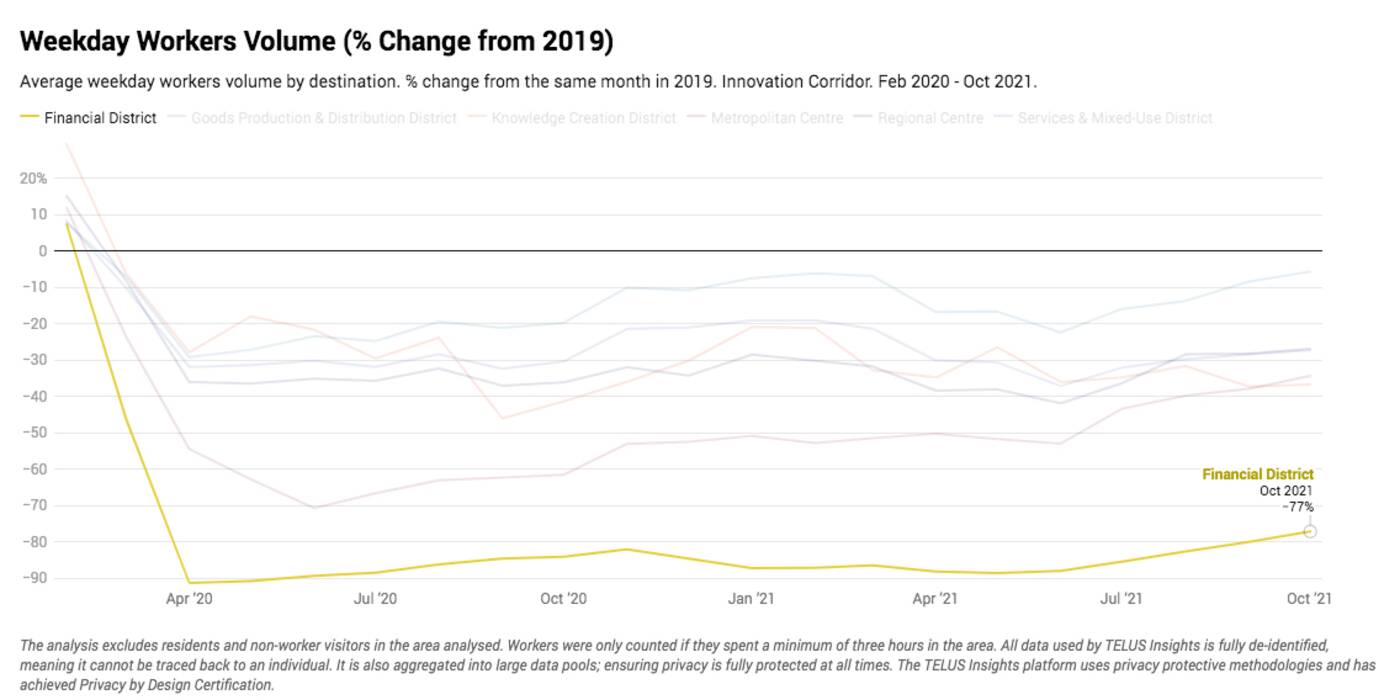 The volume of daily workers in the heart of downtown Toronto remains nearly 80 per cent below normal as pandemic woes linger on. Image via TRBOT recovery tracker.

"Toronto's Financial District remains devoid of workers while employment levels are back to pre-pandemic levels across the Toronto region," reads a release issued by TRBOT this week, citing data from Telus and the Recovery Tracker tool it launched earlier this fall.

"The Recovery Tracker now uses de-identified cellphone data from Telus Insights to reveal trends into the movement of workers and visitors in Toronto and across the Innovation Corridor (inclusive of the Greater Toronto, Hamilton and Waterloo regions)," reads the news release.

"The Recover Tracker is able to access worker and visitor movement as they come in and out of key employment areas, known as 'business districts'."

Using this data, analysts found that The Financial District was hardest hit in terms of daily worker visits, down a staggering 77 per cent since 2019.

That's up a titch from September's numbers (79.9 per cent below pre-pandemic traffic), but not great for the many restaurants and services that rely on downtown office workers to keep their businesses alive.

Consumer spending is going back up in the business district TRBOT has labelled 'Metropolitain Centre' (downtown Toronto) but is still well below pre-pandemic levels. Image via TRBOT Recovery Tracker.

Outside of the city's main centre of commerce, however, things aren't so bad: "The lack of workers in Toronto's larger downtown core is less pronounced (34 per cent below 2019 levels)," writes TRBOT.

"Across most business districts throughout Toronto, weekday employee volumes are more than 25 per cent below 2019 levels."

Some experts worry that this shift might be permanent with so many workplaces going either fully remote or hybrid. TRBOT President and CEO Jan De Silva says conditions simply haven't been right for workers to return in great numbers yet.

"Workers and visitors are critical to the downtown economy in Toronto and in the centre of other cities across the Innovation Corridor," said De Silva this week.

"This new data from Telus backs up what we have been saying all along — that a more complete recovery first requires workers and visitors to have confidence in public health measures, such as transit and at our borders. This is the only way to compel them to return to our city centres at pre-pandemic levels."