Is this the TTC bus of the future?

When one thinks of the future of transit in Toronto, the bus probably isn't the first thing that comes to mind. But in a city that struggles to build big when it comes to transit infrastructure, the humble coach will likely be a fixture on this city's streets for more than just a few decades.

Enter the Xoupir, the fantastical vision of Charles Bombardier (yes, that Bombardier clan) that combines a number of technologies in a sleek new package. 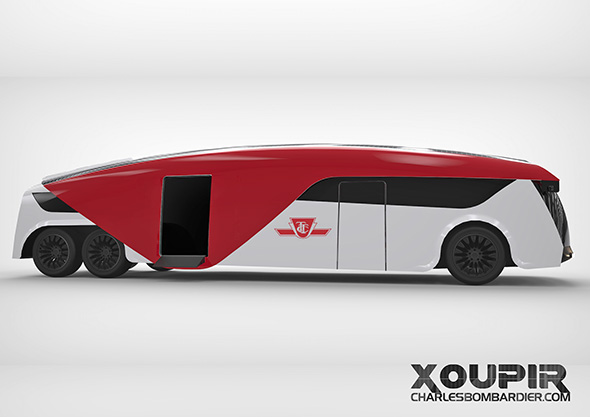 Sure the Xoupir is just a fantasy, but as a recent profile in the Globe notes, the tech that it's built upon isn't from the future at all. Take the electric battery-powered engine: it would use induction coils buried under the street to provide a consistent charge, something already in use in a few European cities.

Solar panels outfitted on the roof would power an on-board WiFi and entertainment systems, and and extra set of rear wheels are added to help with slippery conditions in the winter (something anyone who's travelled north on the Dufferin 29 from Dupont will welcome). Despite the slick look, not all of the technology is particularly groundbreaking. 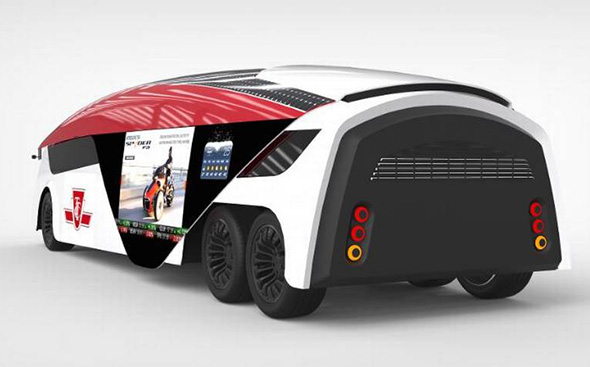 One of the more interesting ideas is the use of smartglass to cycle through targeted advertisements on the exterior of the vehicle. As the BBC notes, that sounds a lot like Minority Report, but it would probably make a transit provide a lot more revenue off of ad sales.