If the clothes make the man, tailoring makes the clothes. Local Toronto entrepreneurs like Harry Rosen have built their business around the idea that men want tailored clothing and high-quality fabrics. Traditionally it has been an in-store endeavor -- getting your measurements taken in a dimly-lit back room.

But custom clothing companies are increasingly turning to the online world to grow their business: customers submit their own measurements, and the clothes arrive at their doorstop. Or they're growing their community through blogging and social media.

Men complaining about off-the-rack clothes caught the attention of local entrepreneurs Winnie Cheung and Noorneet Singh, who have been friends since university. Singh spent time studying in Hong Kong and became addicted to custom clothing while he was there (including Hong Kong-based giant Maxwell's Clothiers). It was only after returning to Canada and discussing the idea with his colleagues that he realized there was a business opportunity.

"Both Winnie and I conducted a lot of market research and realized the opportunity was a lot larger than we imagined," Singh says. "Tons of people always complain about how they have a difficult time finding shirts that fit." So instead of keeping his custom clothes secret to himself, he decided to turn it into a business - and that's when Shirtpal was born.

The two young entrepreneurs faced challenges right off the bat: finding fabric supplies, sourcing manufacturing facilities - all in Asia, so not exactly a ZipCar drive away. But the two traveled and eventually found a solution in Bangkok. They also had to find seed funding, something that isn't always easy in the Canadian startup scene. Luckily they had some sales under their belt by the time they were looking to raise money so it proved the business model and justified the investment.

Now Shirtpal enjoys sales of over $20,000 a month, and the company has even appeared on The Biggest Loser in Asia. Part of its success can be attributed to the affordable price point - custom designer shirts often run over $100, and Shirtpal comes in significantly less than that. "We did a lot of research on our competitors. We wanted a reasonable price so that customers would give us a shot, but also wanted to ensure we covered our cost. We figured that $50-$60 for a custom dress shirt was a great entry price. Thus far the customer response has been positive." 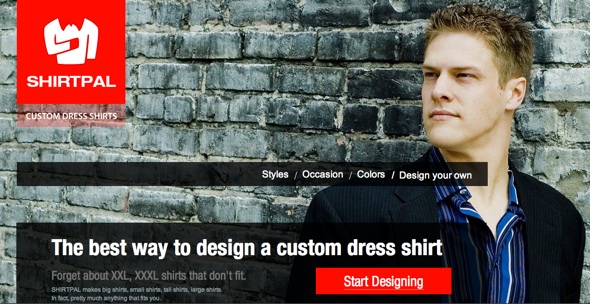 They should be thinking about their competitors - there are a ton out there. From offline companies like local institution Harry Rosen; to local company Marlon Durrant, to other sites like Second Button and Liga Bespoke. Singh says it's the online focus, buying experience and quality that will separate them from the pack. "We are doing everything we can to make the buying process very convenient for the customer," he says. "We are also known for our fabrics; all of which are sourced from Japan, which is known for their high-end fabrics."

The Shirtpal duo may outsource to Asia for production, but they're all about fostering community in Toronto. They hold in-person "Shirtfest" events in several cities including Toronto so they can meet customers face-to-face and help them understand the brand. "At our events customers can get their measurements taken, view our fabrics and see some of our shirts. This makes the buying process seamless for them," Singh says, and I think the pun was intended. They aren't the first to think of holding in-person events though - Maxwell's holds events at hotels around the world (including Toronto) during workday lunch hours, and men can go in for fittings instead of grabbing a sandwich. Local entrepreneur Tim Ryan, founder of Vestiigo, is a fan of Maxwell's." They book suites in hotels around the country and then you go down on your lunch break to get measured," he says. "Genius." Those shirts are more expensive, costing around $350 for three shirts (depending on style), but Ryan says the quality is worth the price.

There are also local entrepreneurs like Jas Banwait who are focused on custom men's clothes, but not in the online setting - Banwait previews fabrics and styles on her Sartorial Savvilian website, but does all fittings in person. She's using technology in a different way - making her company social media friendly and blogging about menswear and trends.

Until Shirtpal starts making women's clothing I won't be able to sample their product. Singh assures me that they're researching the female market and are hoping to launch styles soon - until then I'll have to buy off the rack and ponder what I'm missing.