It might seem strange that, despite living in the city your entire life, you can still be a tourist in your own home. Yet, this is the sort of thinking that Heritage Toronto is looking to change, with the introduction of a new series of iTours.

Announced today by Heritage Toronto corporate secretary Alexandria Pike, in partnership with the RBC, the first Spadina Avenue iTour is already available on the organization's website.

Unbeknownst to many citizens is the large and storied history behind some of Toronto's oldest neighbourhoods. While me might know the age of the area, it's hard to know the context of lifestyle of decades past, which laid the groundwork for today's bustling, city life. Using a combination of photos, videos, interviews and text - both from the City of Toronto's massive archives, and modern sources - Heritage Toronto hopes to build a rich, multimedia experience that will give citizens, both new and old, insight into the city's history.

Spadina Avenue, the first iTour to be released, is intended to be a walking tour through the old city neighbourhood. The narrator takes tourists up and down the Spadina stretch, stopping at various old buildings, banks and businesses, and examining the history and culture behind each. Trinity-Spadina Councillor Adam Vaughn, along with Globe and Mail writer Rick Salutin, both offer their own insight and memories of the area as well, supplementing much of the info learned on the tour.

What I think works about this approach is that it's the easiest way to engage citizens in the history of a given area. Given the large number of people carrying iPods and other media players, the market is already huge for this sort of approach. It's clear that Heritage Toronto recognizes this too; their video tour is even formatted correctly for Apple devices, making participation a simple drag-and-drop affair, without all the headaches of re-encoding. 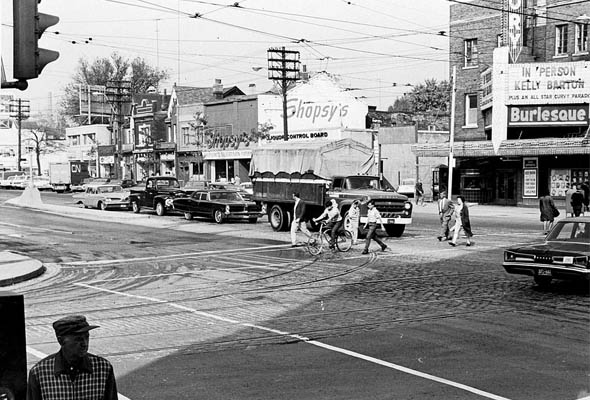 But more so, it let's citizens and tourists alike explore the city in a way that may not always be possible with a larger tour or exploration group. Many of the Spadina tour's stops are located at already busy intersections and crowded streets, which would no doubt become busier with the addition of large-size tour group. This way, small groups of people can move at their own pace, and more importantly, explore outside the tour's boundaries at will.

Those wishing to take the tour have the choice of either watching the video edition on their portable device, or listening to the audio podcast instead.

Images courtesy of the City of Toronto archives, via Heritage Toronto.