As a technologist (wow, that term sounds dated) the start-uppity, trend-setting culture of Silicon Valley has always been alluring to me. Lord knows I have the thick-rimmed glasses, the MacBook, the (potentially long) sideburns, and have been in enough Starbucks to qualify to move across the continent. In the end though, I chose to stay put in Toronto because of my friends and family.

Fortunately for me, Toronto has a unique, burgeoning tech scene of its very own.

Case in point, WordCamp Toronto: A two-day conference about blogging and the tools to make it happen -- in this case, WordPress. Those two days, I should point out, were this past Saturday and Sunday, so I had to ask myself: Was I ready to spend $25 and give up my weekend at Centennial College's Student Centre @ Progress Campus, to listen to people potentially go on and on about blogs and technology? You bet your bippy, I was!

Before I talk about how one of my favorite tech events of the year thus far went down, here's a little primer on WordPress:

WordPress is a blogging "platform"; meaning, fundamentally, you can make and run blogs on it. The definition of what a "blog" is these days is definitely beginning to blur, as evidenced by the presentations that were given at the event. (More on that later.) But, if you've ever wanted to publish your own magazine, your views on music, or even just photos of your vacation, platforms like WordPress provide a means of doing this, very quickly, and easily. In seconds, you can have your very own blog on WordPress.com, or you can download the WordPress platform itself and set it up on your own site.

Still with me? Good. On with the show:

After registration (and picking up my swanky WordCamp t-shirt, hat, and sweet little WordPress buttons) I settled down in my seat, next to my girlfriend. (Indeed, she had wanted to camp out, too. How nifty is that?)

After opening remarks from our hosts, Joseph Thornley kicked things off with a talk titled "Blogs at the Centre of the Social Media Universe". In my opinion, his talk about the role of blogs really helped to set the stage for the speakers to come. What I found cool, though, was that Joseph let members of the audience pimp out their own websites, which all seemed to be more than just blogs: company web sites, online stores, photography portfolios... the list goes on.

One of the hot topics of the day was plug-ins. These are downloadable pieces of software that extend upon what WordPress is capable of. If you need an analogy, think of your Facebook page: When you first signed up, it was pretty plain and easy to look at, until you went and added all those zany applications and teddy bears. Plugins are sort of like that. Teddy bears. 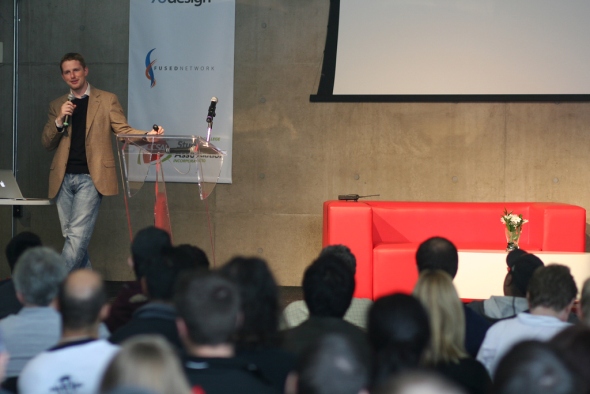 Next up, we were honored to have Matt Mullenweg, a core WordPress developer tell us about just how popular WordPress is (very, and growing), and what new and exciting things we can expect out of the next version (easier upgrades and customizability).

Lunch was comprised of tasty, tasty fajitas -- a great alternative to the usual sandwiches at these events.

While digesting our meals, we went on to marvel at how Rannie Turingan (a.k.a. photojunkie) took to the stage to tell us how we could turn our WordPress blog into a photo gallery, using not much more than a paperclip and a stick of bubble gum.

Then, as if to continue Rannie's presentation, Jamie Oastler took us on a tour of a wide variety of plugins for WordPress that can turn it into an online magazine, a support system, or whatever else you could dream up. By the end of Jamie's presentation, I had to wonder what WordPress couldn't do. (The answer, as it turns out, is that it can't defeat Chuck Norris. Surely somebody's working on a plug-in for that.)

Next up was Charles Hodgson, of the popular podcast Podictionary. Charles transported us from the written word to the spoken word, and how WordPress can provide a medium for audio.

On Day Two, David Peralty, who makes a living off of his blog, revealed his insight and not-so-secrets (write meaningful content, and don't be afraid of running ads) on how he does what he does -- probably every blogger's dream.

Mark McKay took us into the realm of video blogging, and was thankfully, in person, was not as seizure-inducing as his show. As he put so succintly, "a blog is like a TV show on the Internet: we can all be stars."

Briefly back to stretching the capabilities of WordPress, Brendan Sera-Shriar shared a wealth of knowledge on writing plug-ins, and recommended a veritable whack of cool toys that I'm itching to check out. 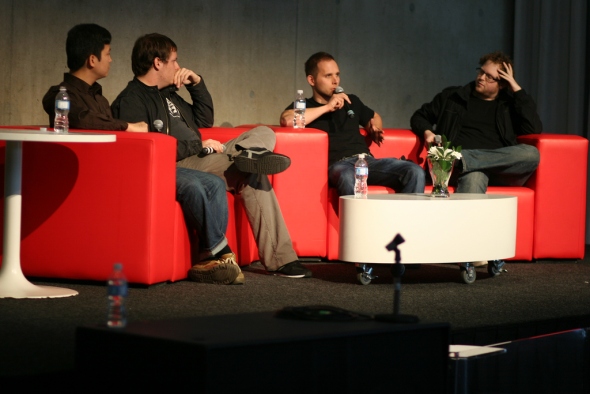 And finally, the show concluded with a panel -- which included Tim and Chromewaves's Frank Yang (among others) -- discussing entertainment blogging.

In the end, WordCamp was a thoroughly informative event and I, for one, certainly left with a lot to think about. But more importantly, getting the chance to meet some of the interesting people I follow on the Internets was the most rewarding to me. I look forward to the next event.

For more on what transpired at WordCamp Toronto, check out wordcamptoronto.com.

Thanks to Rannie Turingan for the photos, which kick any of the ones I had taken flat on their collective asses.