Election 2008: The Internet has my Vote

In the future, elections will be won on the Internet via competing SNL digital shorts... or something like that. However, while Canadian politicians aren't (yet) ridiculous enough to fall on to the US radar, even our politicians recognize the value of weighing in on the Internet as well as traditional media streams.

Each party has a fairly decent website (if you're interested, Conservative, Green Party, Liberals, and NDP) but this is hardly where to go for critical, unbiased, or generally entertaining political content. Instead I'm trying some of these more clever sites to help me decide where to place my vote.

TheUndecided.ca is by far the best tool I've found so far in helping to actually make a decision in Tuesday's election. Like a personality test, the site helps you align your individual position on vital issues with those of a particular party.

By answering questions about key Canadian issues (accountability, childcare, decriminalization, families, fuel economy, healthcare, Kyoto, missile defense, political reform, same sex marriage, and sovereignty), this site will spit our your closest political match. The downside is that no party has all the answers, but this is a very interesting test to see if your political loyalty is in line with your personal values. 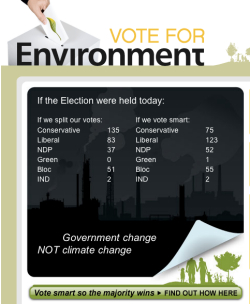 VoteEnvironment2008.ca and VoteforEnvironment.ca help to promote environmental issues as the basis for voting. The first is brought to you by David Suzuki, whom I for one trust as an environmental ambassador, and helps to clarify how each of the party platforms fits into the new green initiative. It also offers a lot of community-driven discussion about key environmental issues, without the added political jargon.

VoteForEnivronment.ca offers an ongoing breakdown of split vs. smart voting for the environment (right).

Anti-Harper Vote Swap (also see the less-biased Vote Swap Canada application) are controversial 'vote swap' projects that work to help avoid vote splitting by pairing up voters in different ridings. The voters then 'agree' to vote for each other's candidate of preference within their own riding.

This is a great idea; I live in Trinity-Spadina where I am confident Olivia Chow (NDP) will win whether I give her my vote or not. Using vote swapping, I could now offer my vote to say, a Green candidate in another riding. However the system relies on each voter's honesty/integrity - a risky venture, for sure. There's also the question of legality, although so far any challenge to these vote swaps has been unsuccessful.

AnyonebutHarper.ca is probably one of the best-known sites in this election. So we all know that Harper has his haters, and I don't think his new commitment to arts funding is going to swing any votes his way in my riding. But for those of you living in some of the more tenuous Conservative areas, this site is non-partisan and deserves a look if you're anti-Harper. By entering your postal code, you can see whether you live in a swing riding and - if so - who to vote for to strategically keep Harper out of government.

I couldn't find any similar sites dedicated to the other Candidates, although there is a strong Anti-Dion vibe on the pro-Conservative websites. I guess only Harper is special enough to deserve his own online anti-campaign.

Of course the blogosphere plays a huge role in generating discussion about the election, and as such will probably influence a few voters. The Kensington Debate I watched didn't help me, but it helped a fellow blogTO reader, so you never know. These Top 25 Political Blogs range from intellectual to insulting, but are generally offer some great entertainment value with a side of critical insight.

Western Standard looks at politics from around the world, but many articles have a definite Canadian focus. I was checking out "What Harper Needs To Do" most recently, but there are plenty of articles and comments about other issues like marijuana legalization, crime and the US election.

Canadian Cynic is a hilarious and more Canada-minded blog. The frank, sarcastic and openly anti-Conservative tone is pretty consistent, but also critically relevant. Being somewhat cynical myself, this site helps calm the nerves that certain candidates are getting on these days.

Finally, if you happen to be a decided voter, you can strut your political preference with a 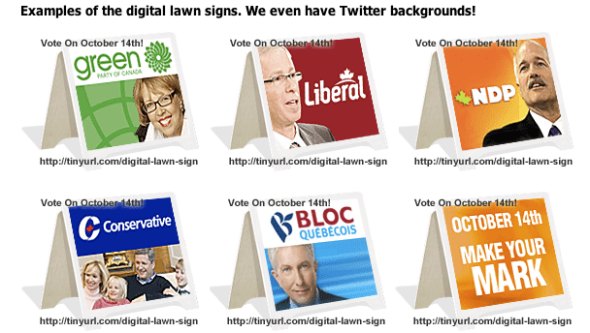 Digital Election Sign. These down-loadable signs can be attached to your email signature or web page, revealing your political alliance to the entire internet (maybe not such a great idea if you're a Liberal supporter in Toronto).

I still plan to postpone making any election decisions until Tuesday and even then, I'm still undecided about whether to go out and vote or sit at home on my computer. Maybe this'll help some one else decide.