The Toronto Blue Jays are getting closer to their first step in transitioning the Rogers Centre.

Planned to be ready in time for the team's home opener on Tuesday, April 11 against the Detroit Tigers, the Blue Jays are undertaking fairly significant renovations to their ballpark that has been under construction since October. 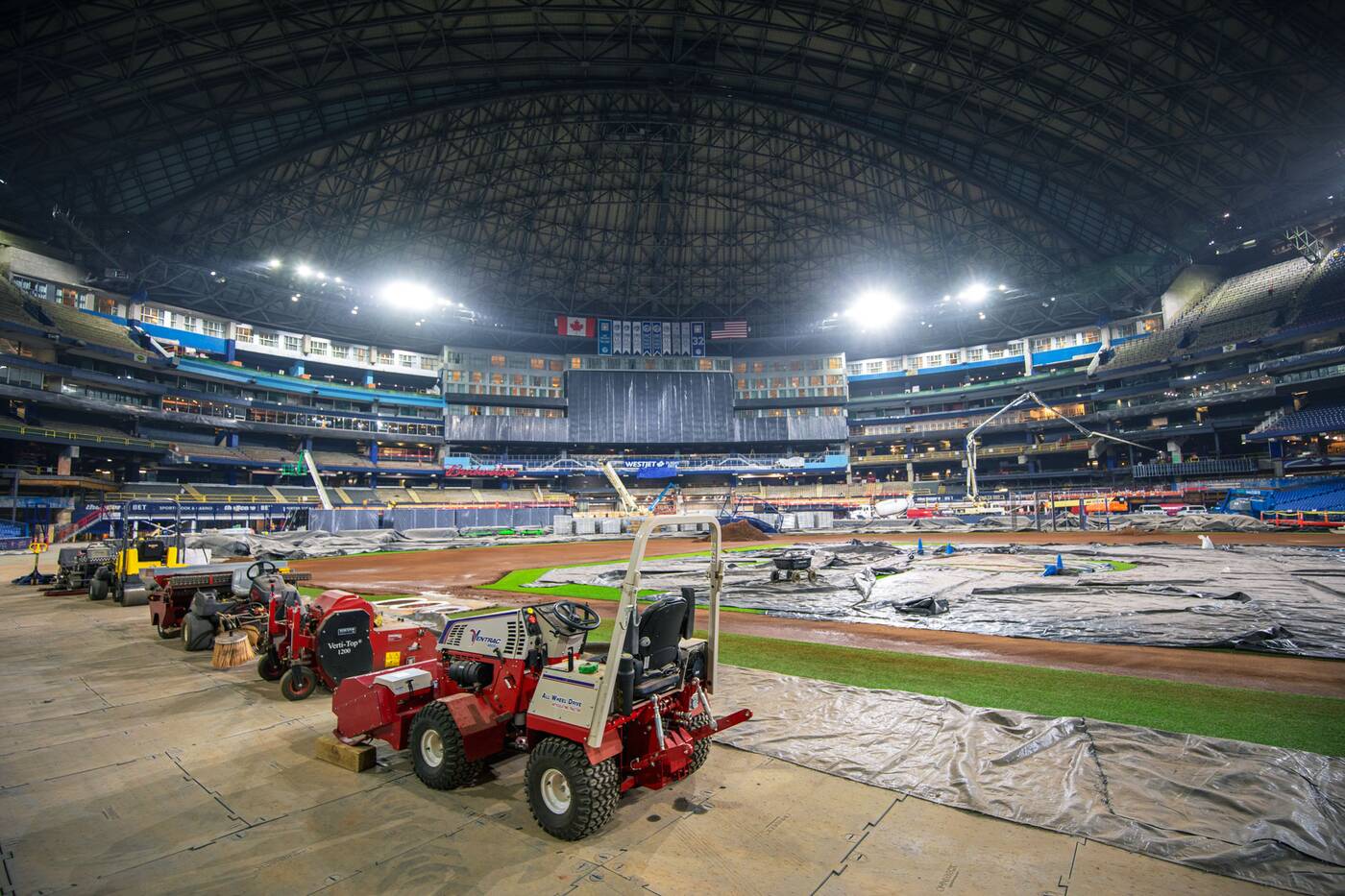 The field is currently littered with construction equipment.

And with a partial unveiling of the latest progress to the media taking place on Tuesday, new information about the Rogers Centre renovations has been revealed. 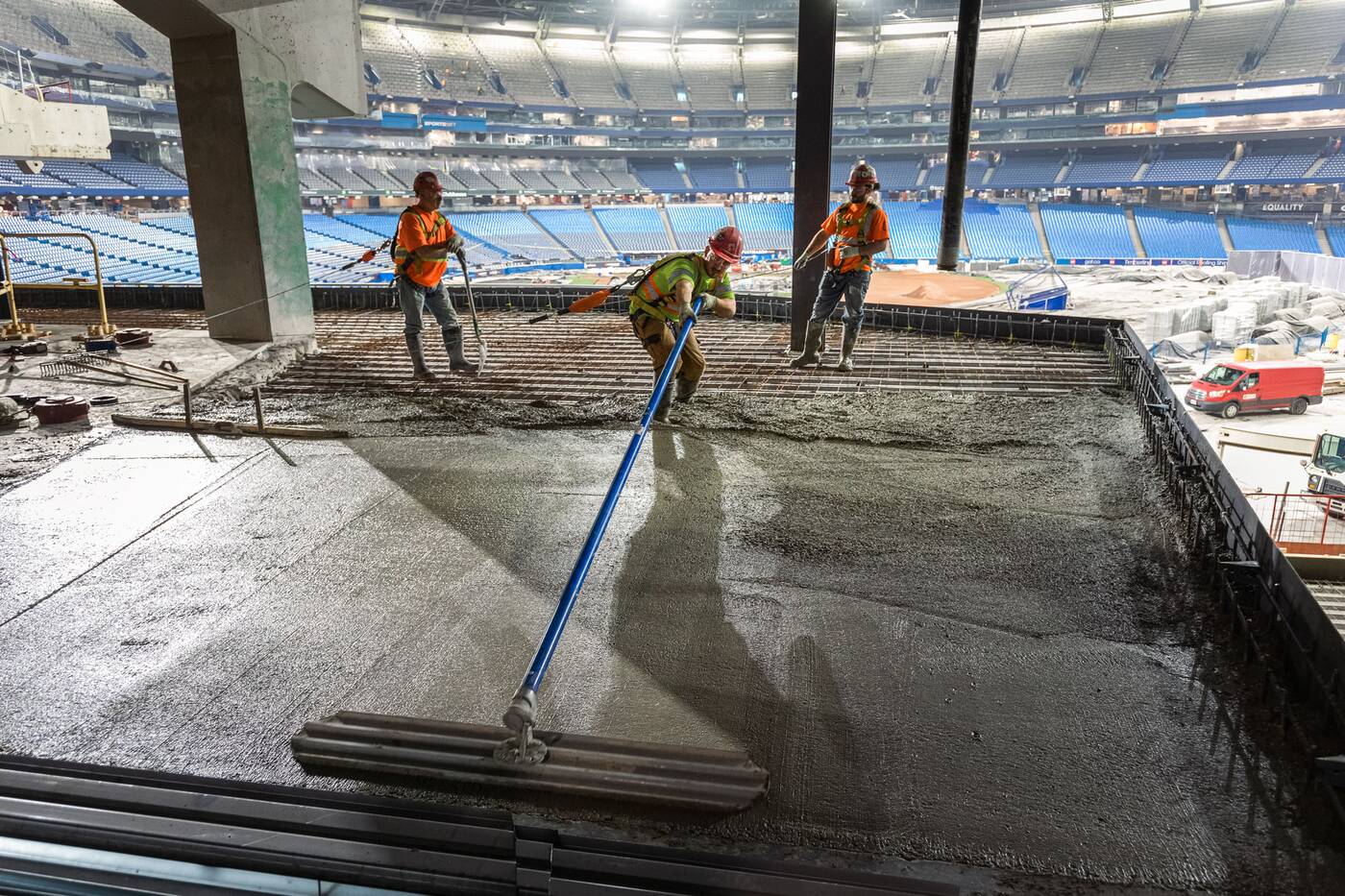 New areas are being constructed that will bring fans closer to the action, at the cost of former seating areas.

One of the biggest changes to the stadium will be the reduction in seating capacity by "nearly 3,000" seats, per Anuk Karunaratne and Marnie Starkman, who serve as executive vice presidents of business operations for the Blue Jays. 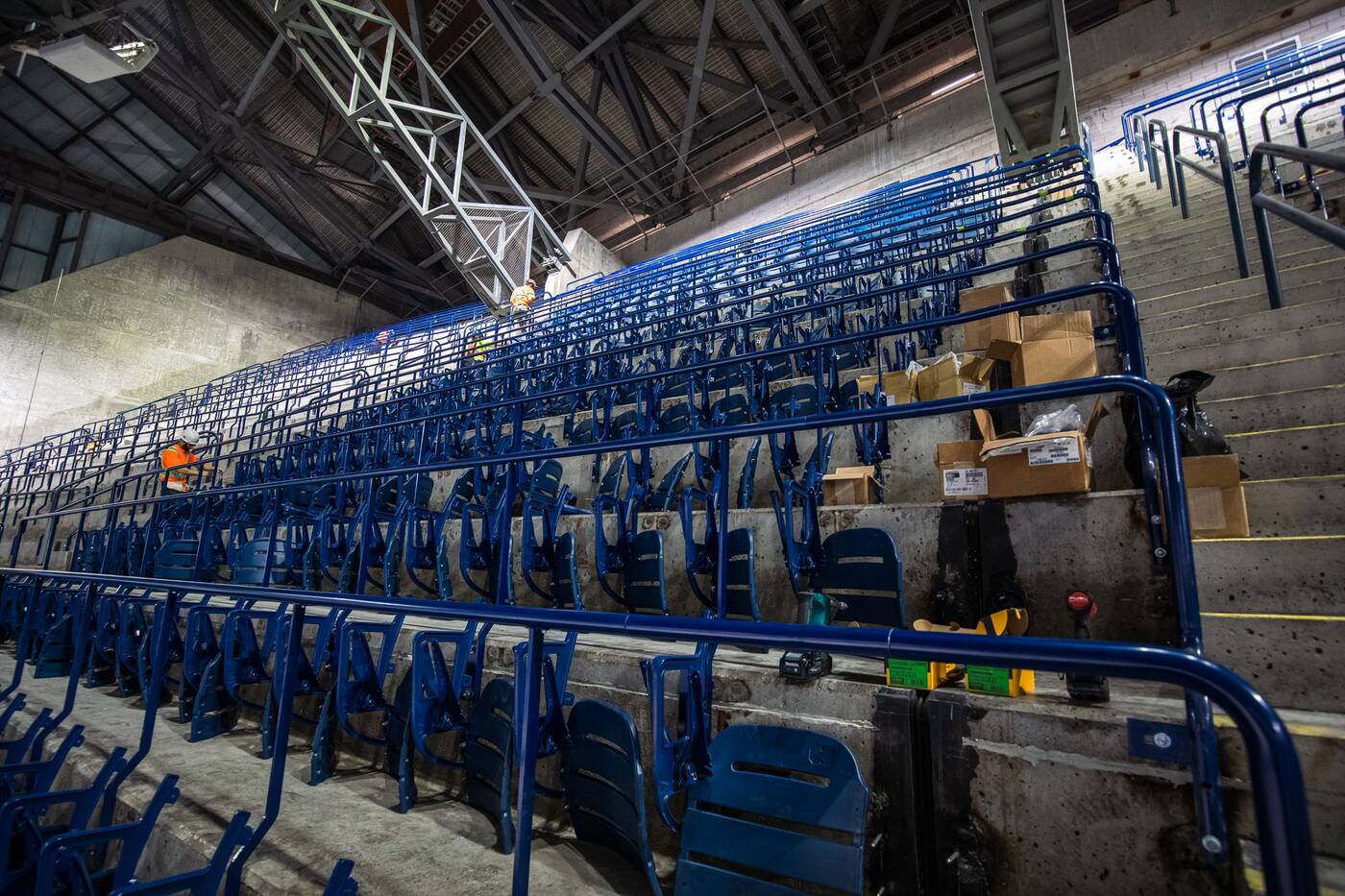 Seating replacement in the 500 level.

The capacity for baseball games is currently listed at 49,286, with the Blue Jays' 7 per cent reduction estimate putting the new capacity at around 46,000 seats. 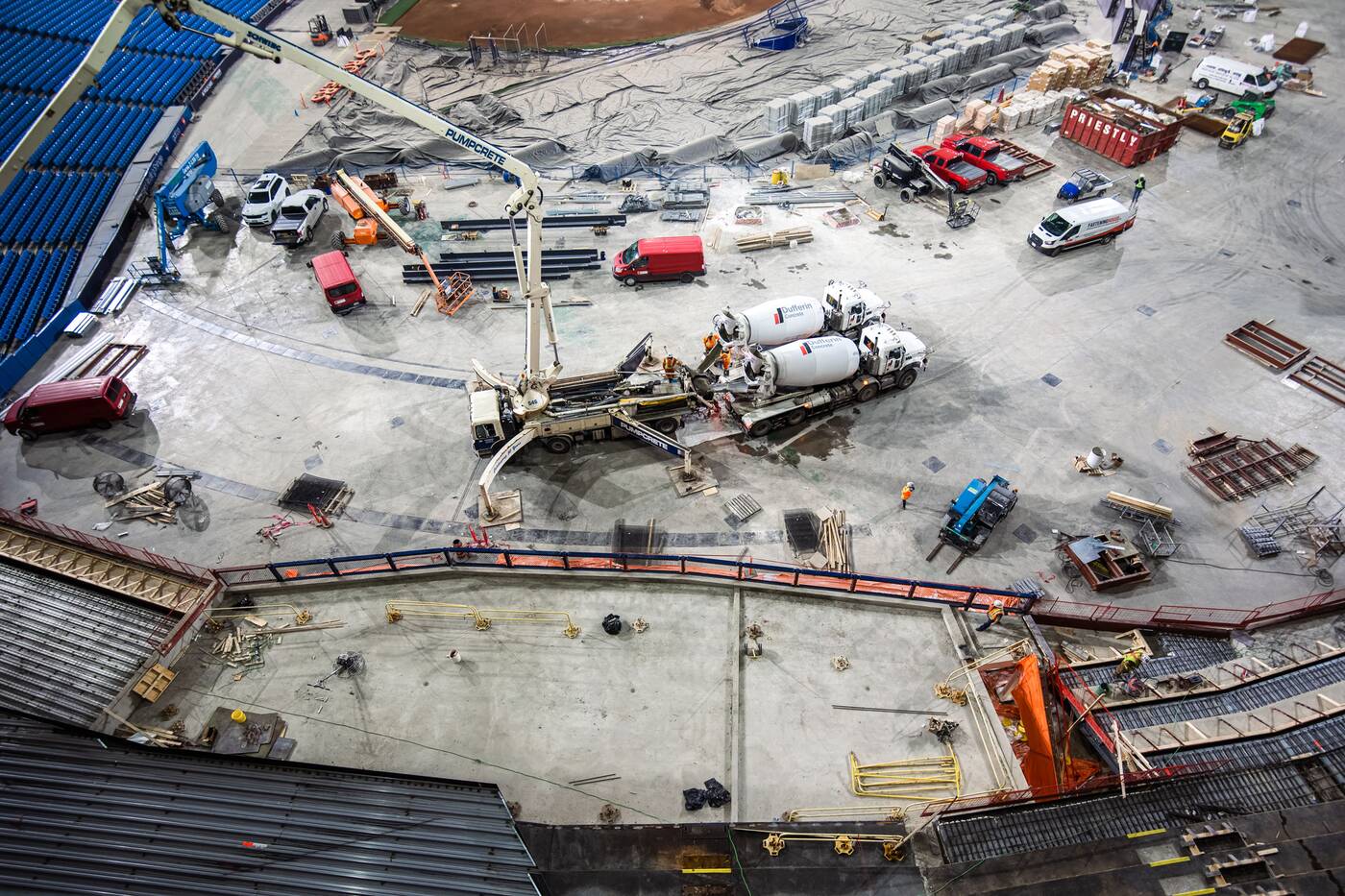 One of two new raised bullpens overlooks the field.

New field dimensions, as a result of the renovations, are expected to be announced in April. 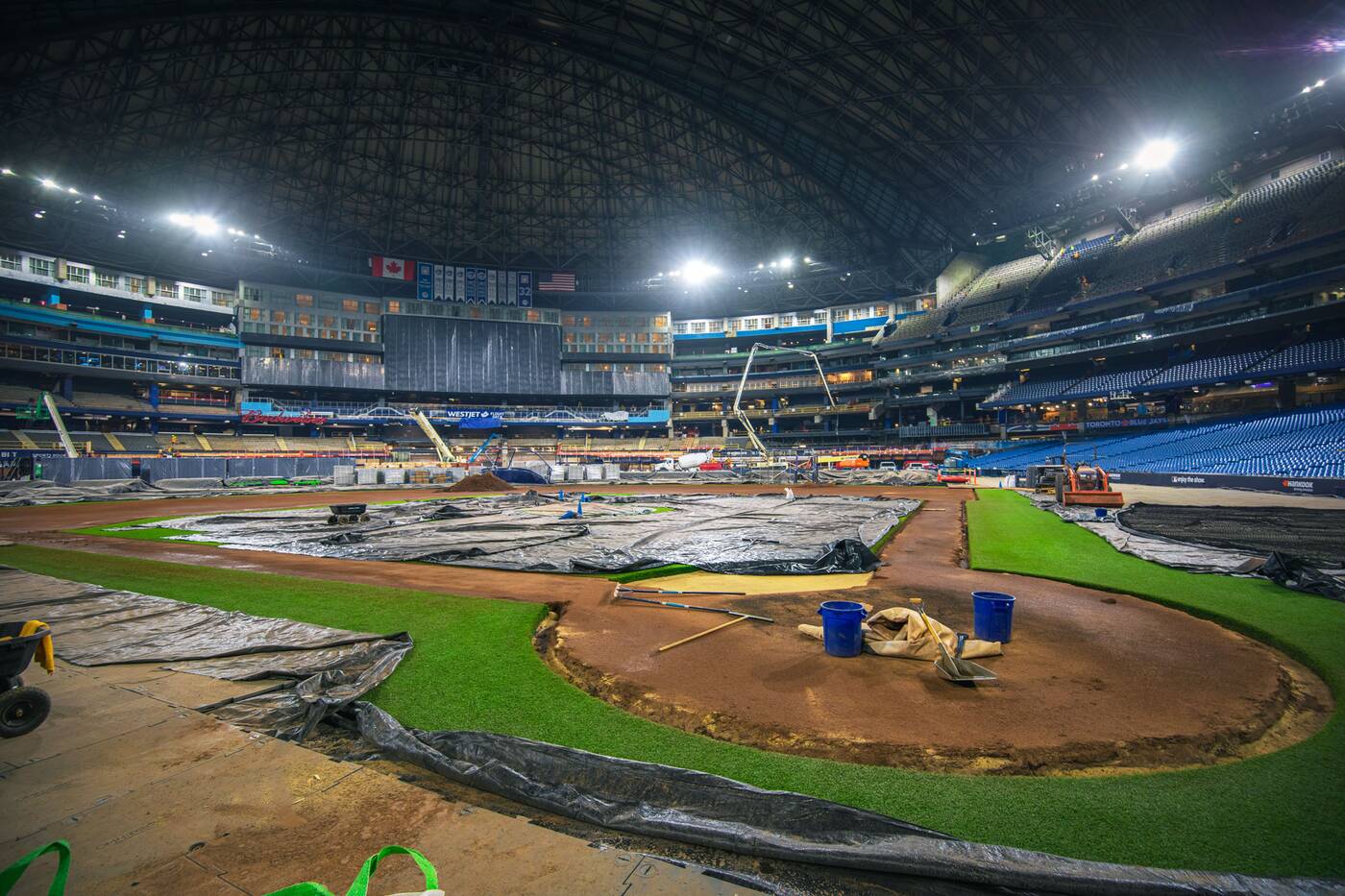 One thing that won't be changing for the 2023 season is the artificial field surface.

Through 2024, the Blue Jays are also replacing every physical seat in the ballpark, starting with new seats coming to the 500 level this season before replacing the 100 and 200-level seats beginning next offseason. 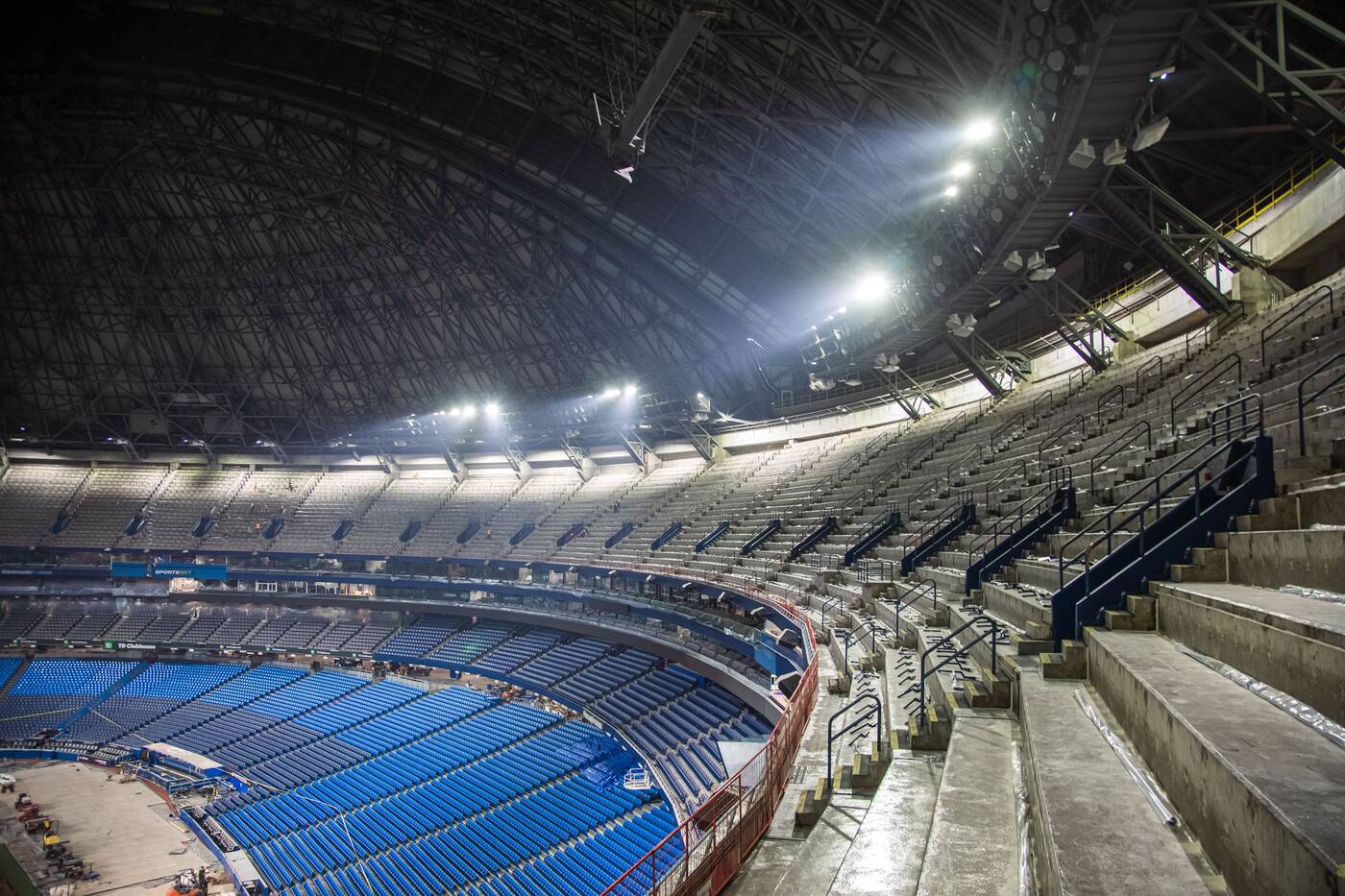 Removed seating from the 500 level.

The new seats are in a darker blue colour than the traditional faded blue seats, which were originally installed for the SkyDome's opening back in 1989.

A look at the seat replacement work being done in the 500 level at the Rogers Centre - 📹 @Jack_Landau #Toronto #RogersCentre pic.twitter.com/n5sRM4aHMx

A Blue Jays team spokesperson confirmed there are no immediate plans to sell off the 500-level seats, though 100 and 200-level seats in the future will likely be available for purchase. 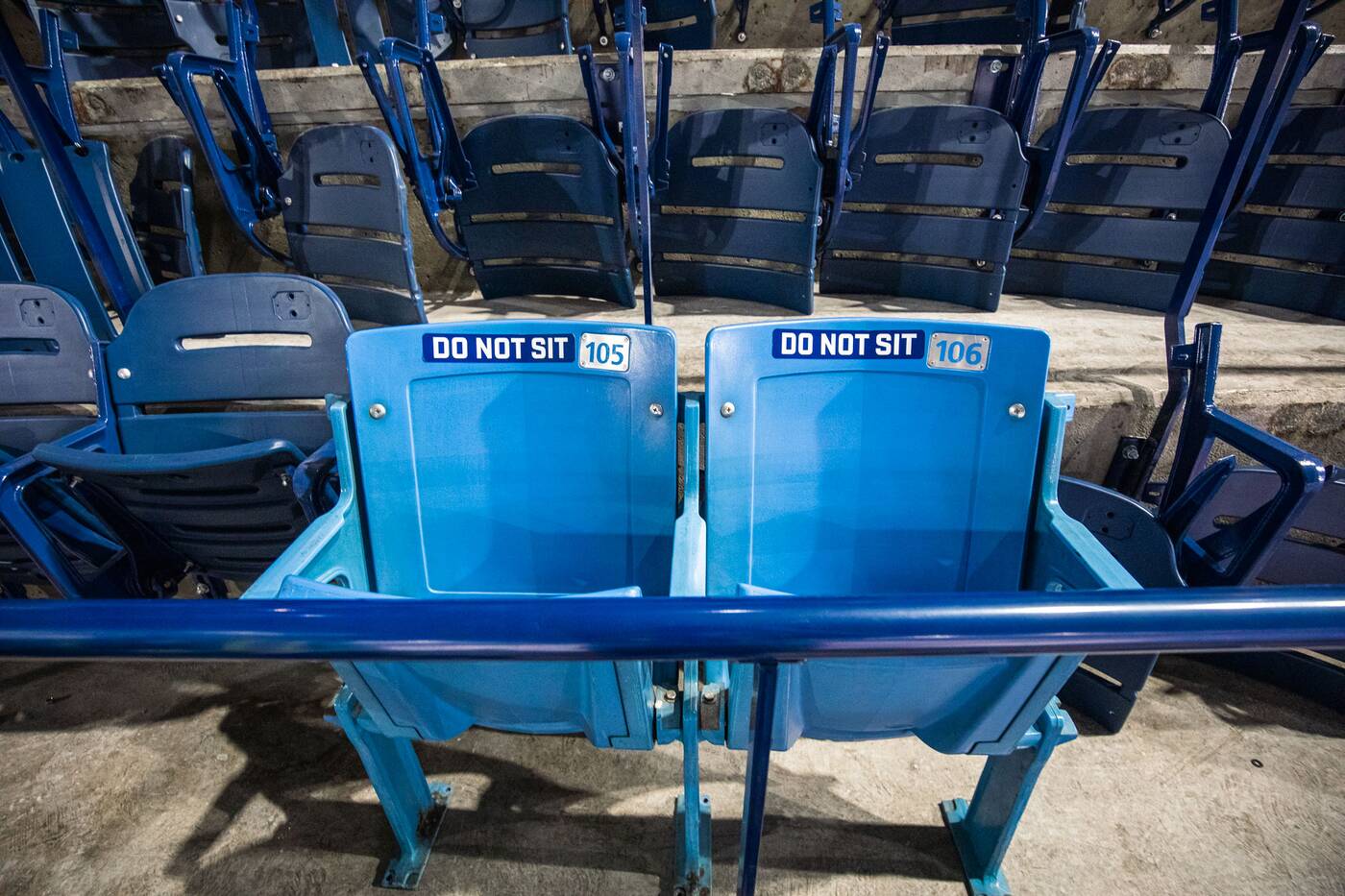 Former seats dating back to the original SkyDome opening surrounded by their replacements.

Much of the reduced seats come from the creation of four new "social spaces," similar to the WestJet Flight Deck located in centre field on the 200 level.

The changes in capacity are due to the removal of portions of certain sections, to allow the Rogers Centre concourse and overhangs to be cut back in order to allow for the new food and drink options in these spaces.

The four social spaces are as labelled as follows:

The social spaces are designed to be reminiscent of Toronto neighbourhoods and social life, with each new spot having a distinct feel of a different part of the city.

The Corona Rooftop Patio is meant to feel like, well, a rooftop patio, with a view of the CN Tower.

Park Social is designed to be a family-friendly environment, with park games and child-oriented activities to be included in the area. 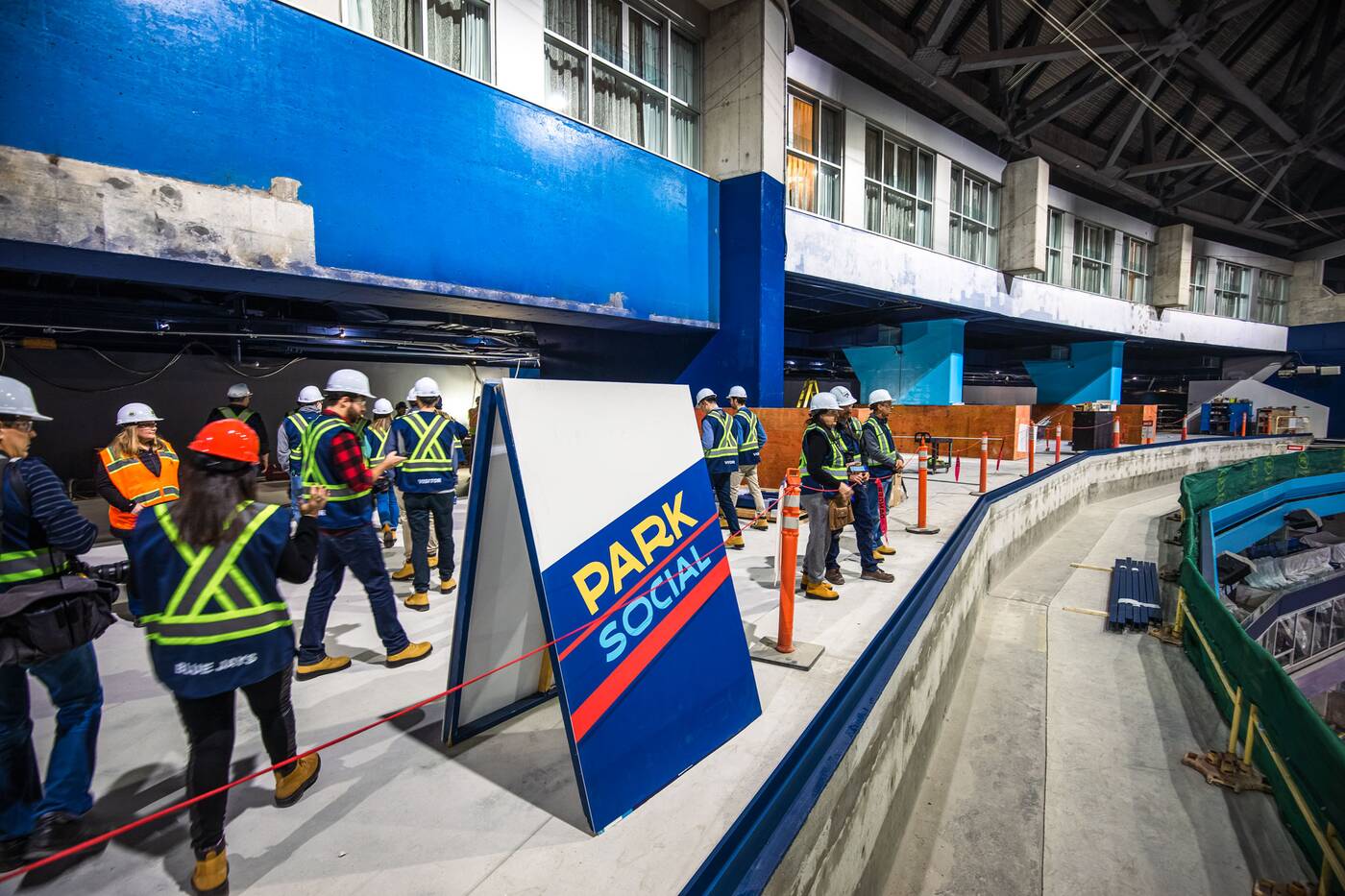 The Stop is a transit-themed bar, located directly behind a newly installed batters eye that adds a new food and drink option in a previously quiet area of the ballpark.

A transit-themed food and beverage area will soon take shape in this spot at the Rogers Centre - 📹 @Jack_Landau #Toronto #RogersCentre pic.twitter.com/XQLOHVZLzu

Lastly, the Catch Bar is described as “The Place to be Seen & Catch a Home Run,” reminiscent of Toronto's King Street Entertainment District, located directly above the visiting bullpen.

Each bar also has a designated viewing area in its vicinity, allowing fans to watch the action from previously unavailable vantage points.

Minor changes are also coming to the previously existing WestJet Flight Deck, as well as smaller standing-room-only viewing areas on the 200-level Terrace and 100-level Mezzanine that allow for new angles for fans to watch the game. 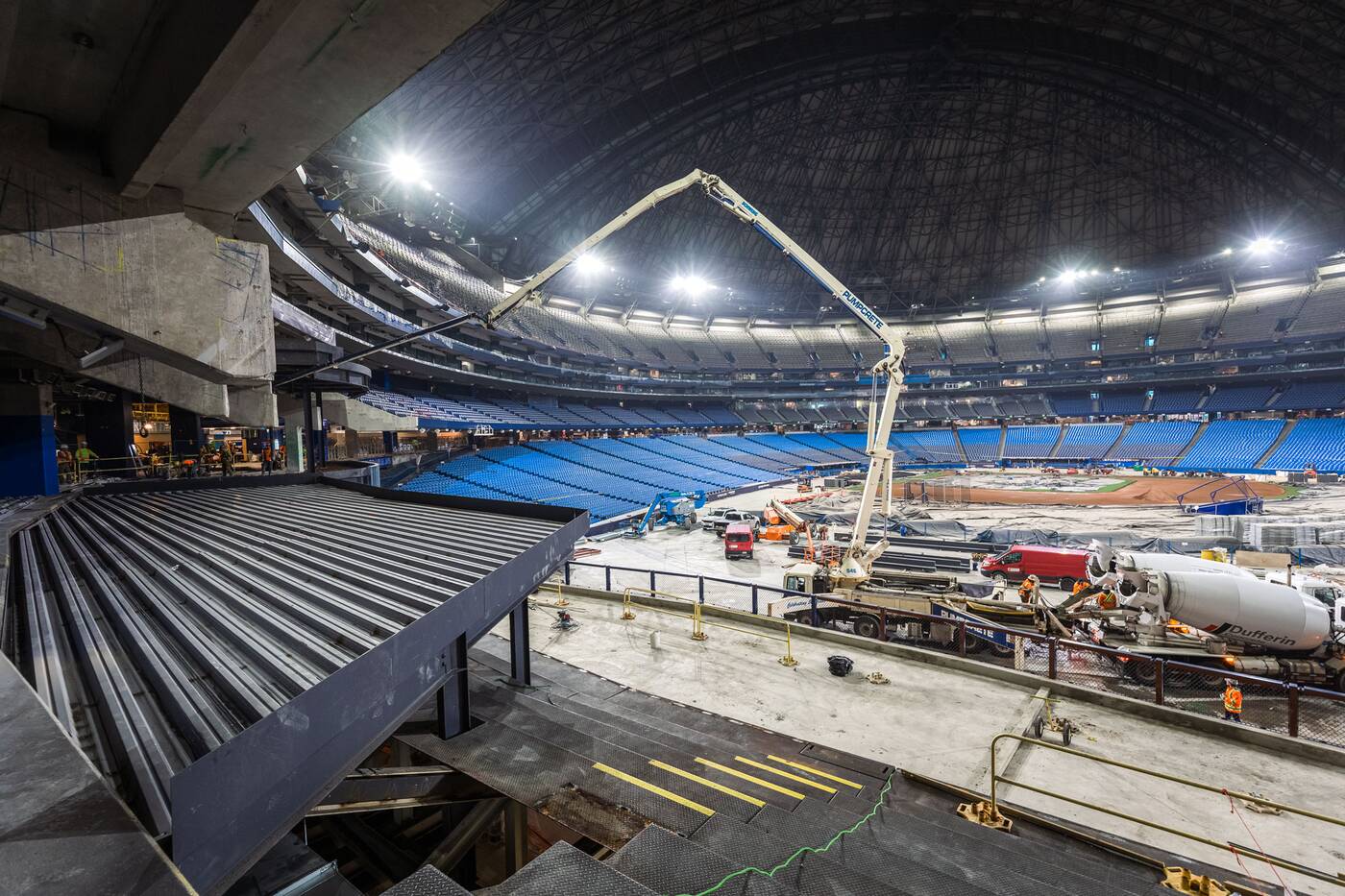 Both bullpens are being raised, allowing for fans to be closer to pitchers warming up. 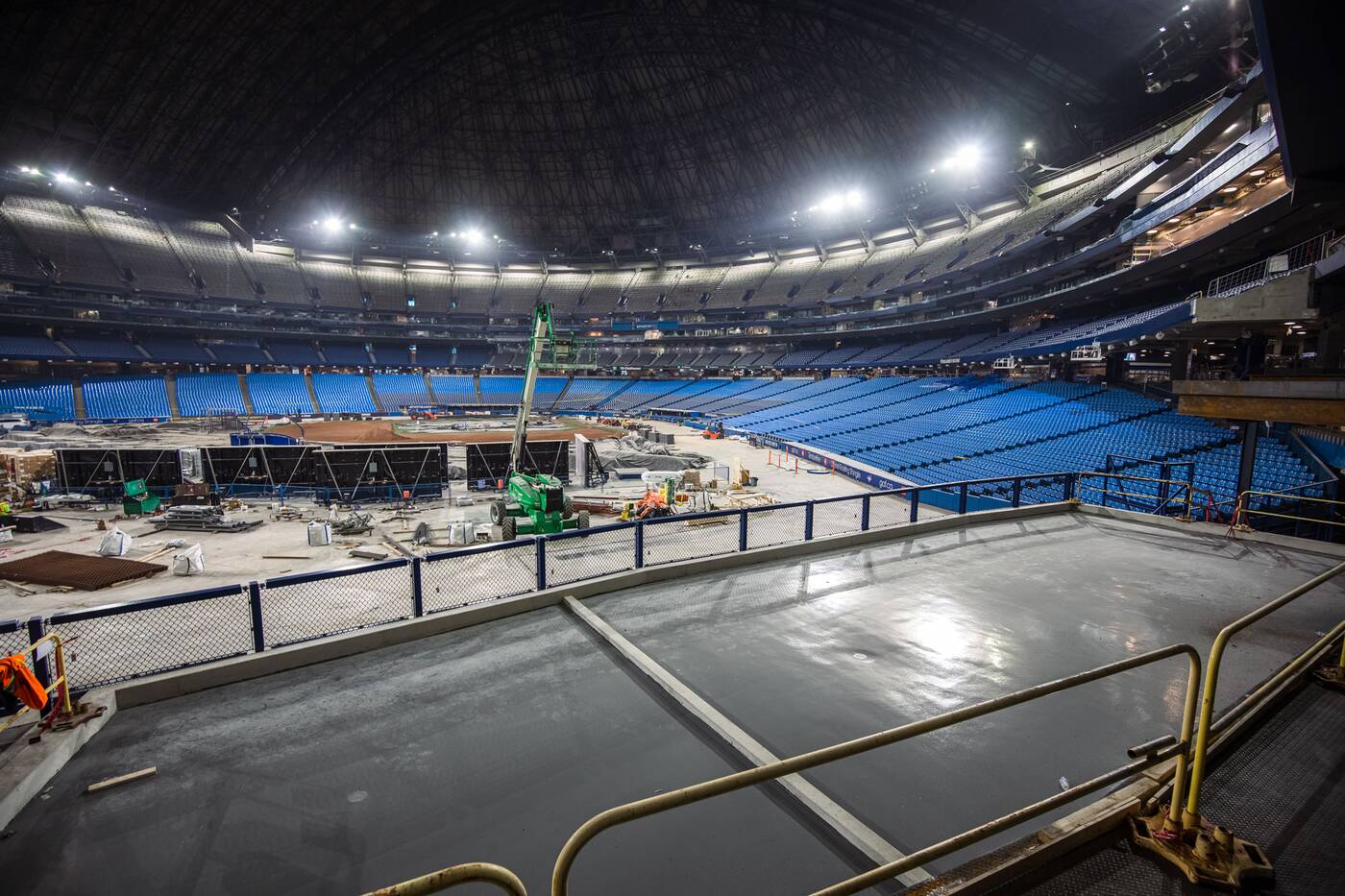 All of the social spaces will be available to any fan with a ticket to the Blue Jays' game. 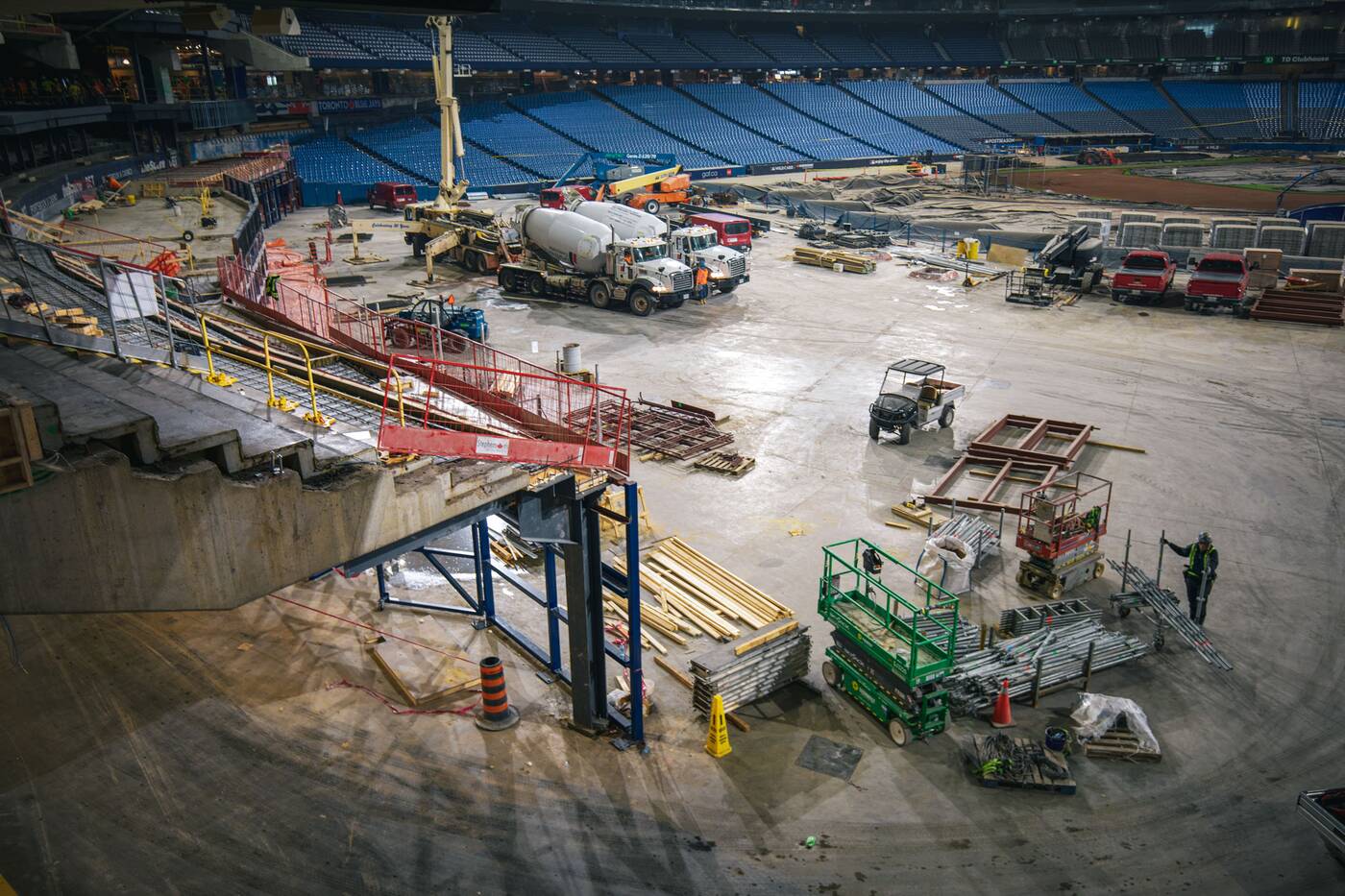 Additionally, portions of the Flight Deck will be available for groups of 50 to 300 to rent for private events.