Spin studio is permanently closing all of its Toronto locations

The stationary wheels are about to stop turning at two downtown Toronto spinning studios thanks to building issues and "the current climate" faced by business owners today.

Studio Spin, the indoor cycling counterpart to celebrity pilates hot spot Studio Lagree, announced in an email to members on Wednesday that both of its locations in Toronto would be closing in the coming weeks.

"It is with great sadness that we announce the closure of both Studio Spin King W. and Studio Spin Queen E. effective Dec 25th," reads the message.

"Unfortunately, due to issues with the building and our landlord at King West coupled with the current climate, we have no real choice but to close our doors so soon after we opened them."

With only two locations in Toronto, this effectively nixes the Studio Spin brand locally, at least in its current iteration: The aforementioned email says that Studio Spin Queen East will reopen sometime in 2022 "under different management." 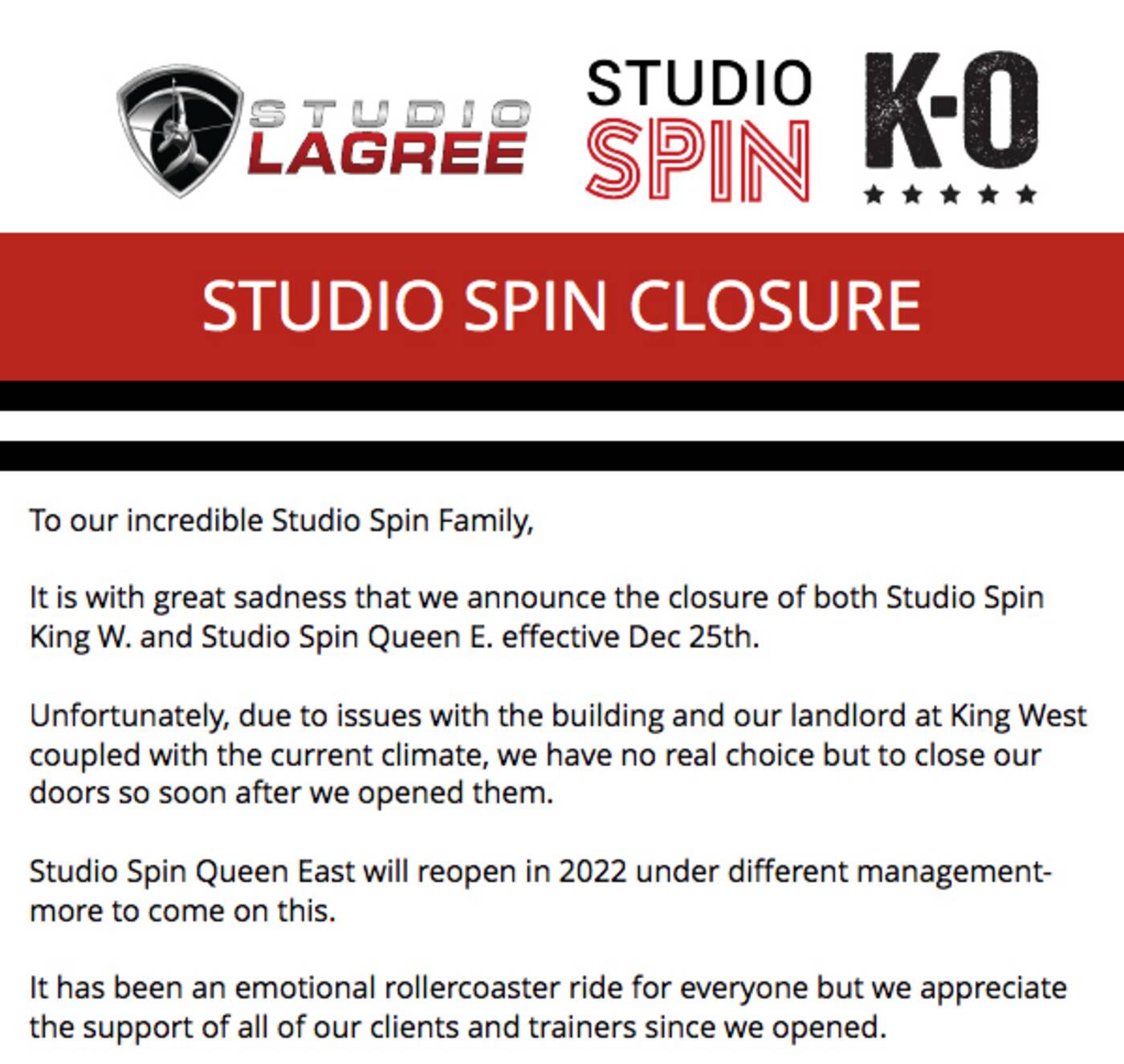 Clients of the studio were told on Wednesday that both Studio Spin clubs in Toronto would be closing on Christmas. Screenshot by Lauren O'Neil.

We know that Studio Spin at 780 King St. W exists on a block that's been targeted by megadeveloper Brad J. Lamb for condos (what else?) but the other location at 672 Queen St. E. doesn't appear to have this problem.

It is not yet clear if the studio will remain at its current location or move elsewhere along Queen Street East when it reopens.

"It has been an emotional rollercoaster ride for everyone but we appreciate the support of all of our clients and trainers since we opened," writes Studio Spin Management.

"For those with existing packages or credits we will transfer your credits (dollar for dollar amount) to Lagree classes OR you may carry them over to RISE CYCLE which is opening in Liberty Village in February 2022 and lead by a dear friend of the Studio Spin family."

"We have weathered many storms in the past two years and we will weather this one too — we thank you from the bottom of our hearts for continuing to show up for us and yourselves and look forward to announcing some exciting news from Studio Lagree in the new year."